Vratislavia Chrono – it all began with this model

The first Vratislavia watch to be officially sold was the Heritage Chrono model. The watch was limited to 150 pieces and sold out at a rapid pace. The price of this model directly at the manufacturer was PLN 450, today, if we could find this model for sale somewhere, then we would have to pay about PLN 1000 for it and we would have to hurry so that it would not be catched by someone else. 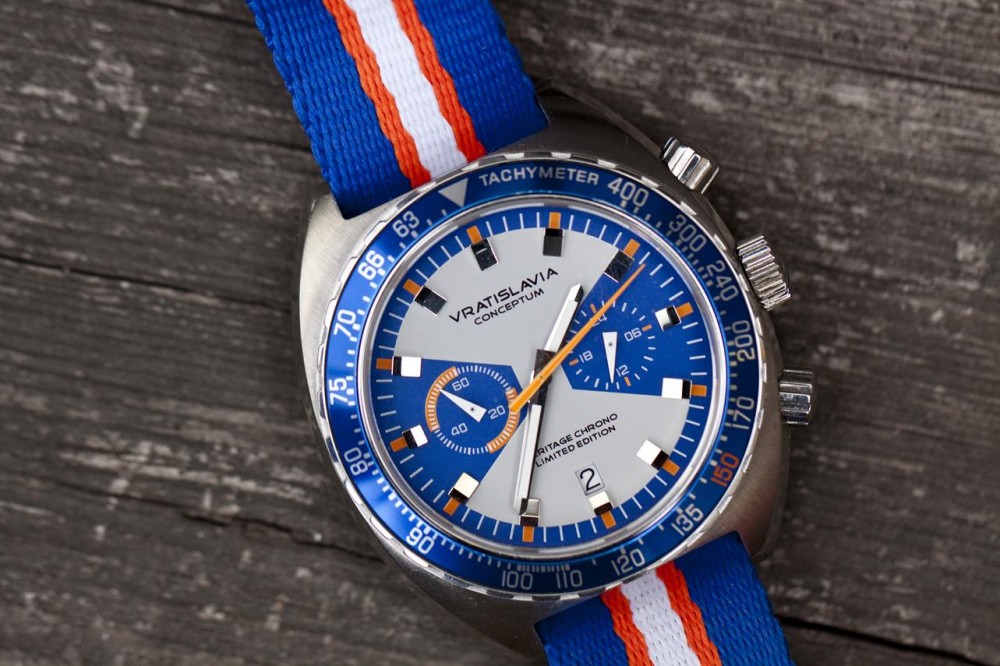 It was this model that initiated a series of chronographs based on the same shape of the case, which untill today has appeared in total 17 versions – each subsequent model has been improved by improving the quality of components and the workmanship itself. The latest chronograph of Vratislavia are Chrono Rapide S.13 and S.13R models and this variant will be the subject of this review. The watch was made available to me by Marcin (the owner of the brand and at the same time the user of the KMZiZ forum) for over 2 weeks, so I had time to get acquainted with it before issuing my subjective assessment, which I hope – you will read  soo.

This is the sixth Vratislavia watch I am dealing with, so the box came as no surprise to me – as always it is a rectangular wooden box with the Vratislavia logo, inside with a polyurethane lining with a cutout for the watch. The case is light and does not give the impression of solid, but considering the amount for which we buy the watch, it would be overkill to expect something more. 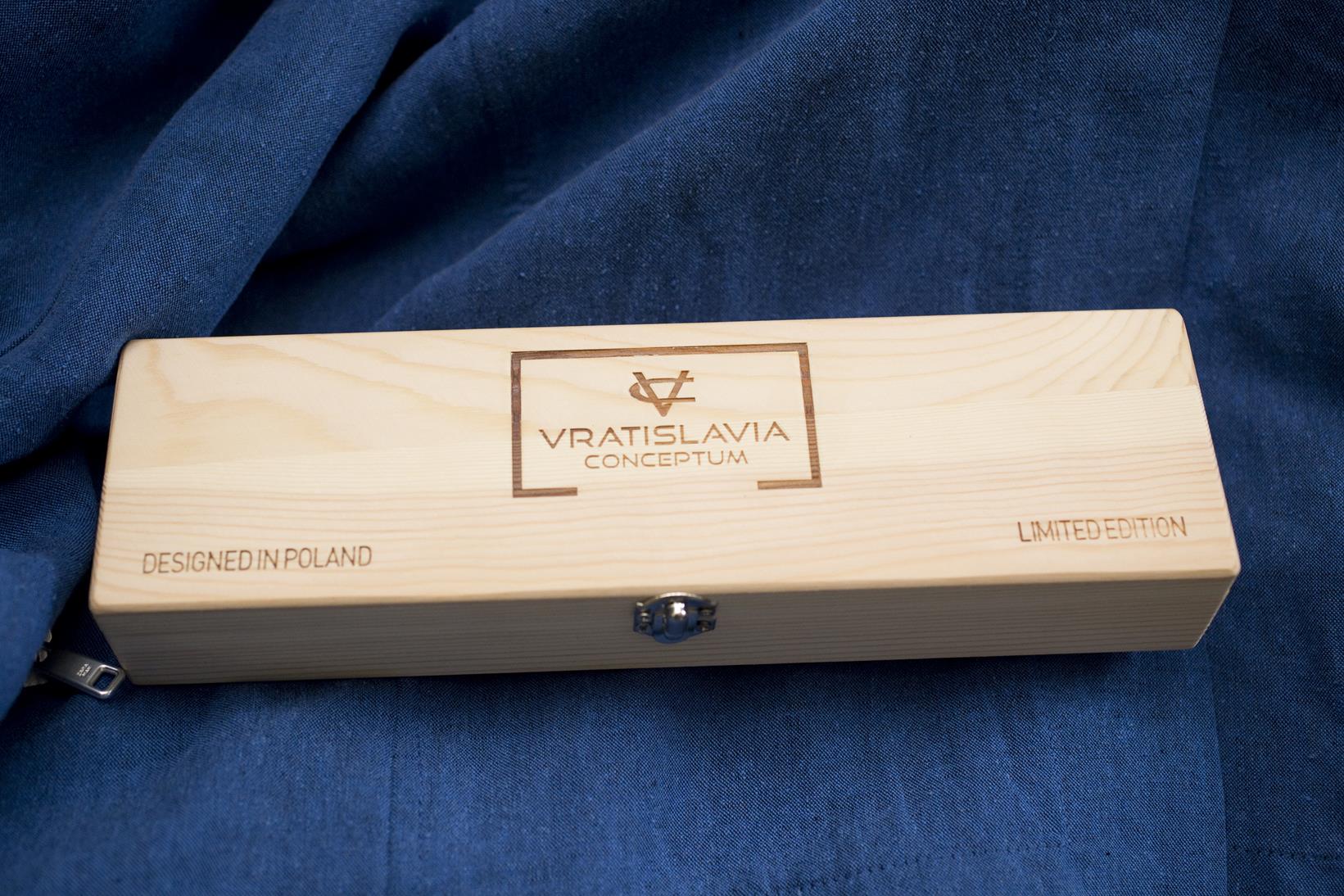 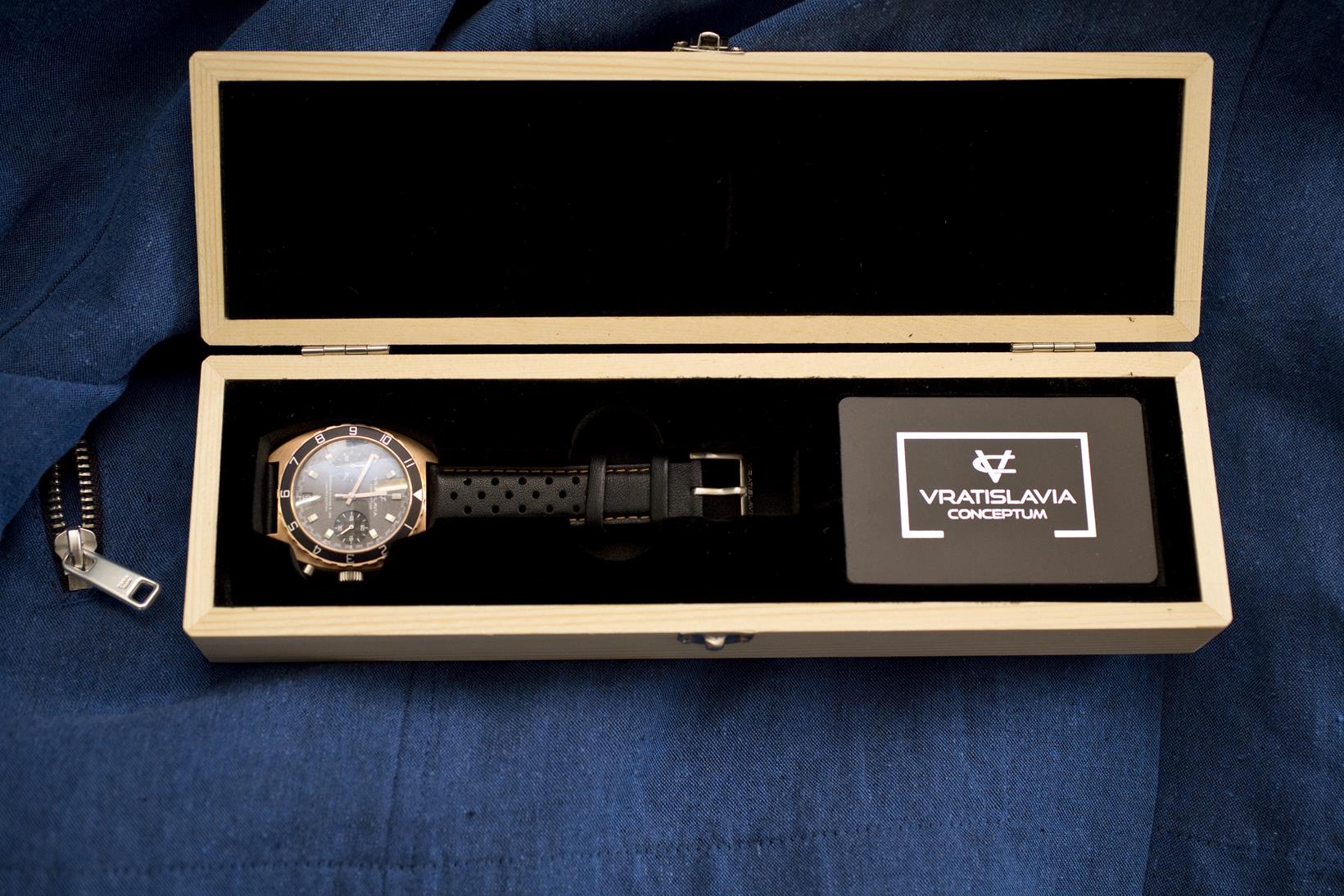 The case has a width of 42mm without crown, a distance from lug to lug of 46mm, and despite these relatively small dimensions, in reality it seems larger and more massive, mainly due to the shape of the case itself and the height, which together with the glass is 13.8mm. On my hand it fits like most watches with more straight ears – poorly … it doesn’t protrude beyond the wrist, but places itself at one of its ends. Recently, I have been thinking more and more often about the reorganization of the collection and the sale of all watches with a case wider than 40mm (i.e. almost all), because these smaller watches are much more comfortable to wear, regardless of whether they are on a strap or a bracelet. 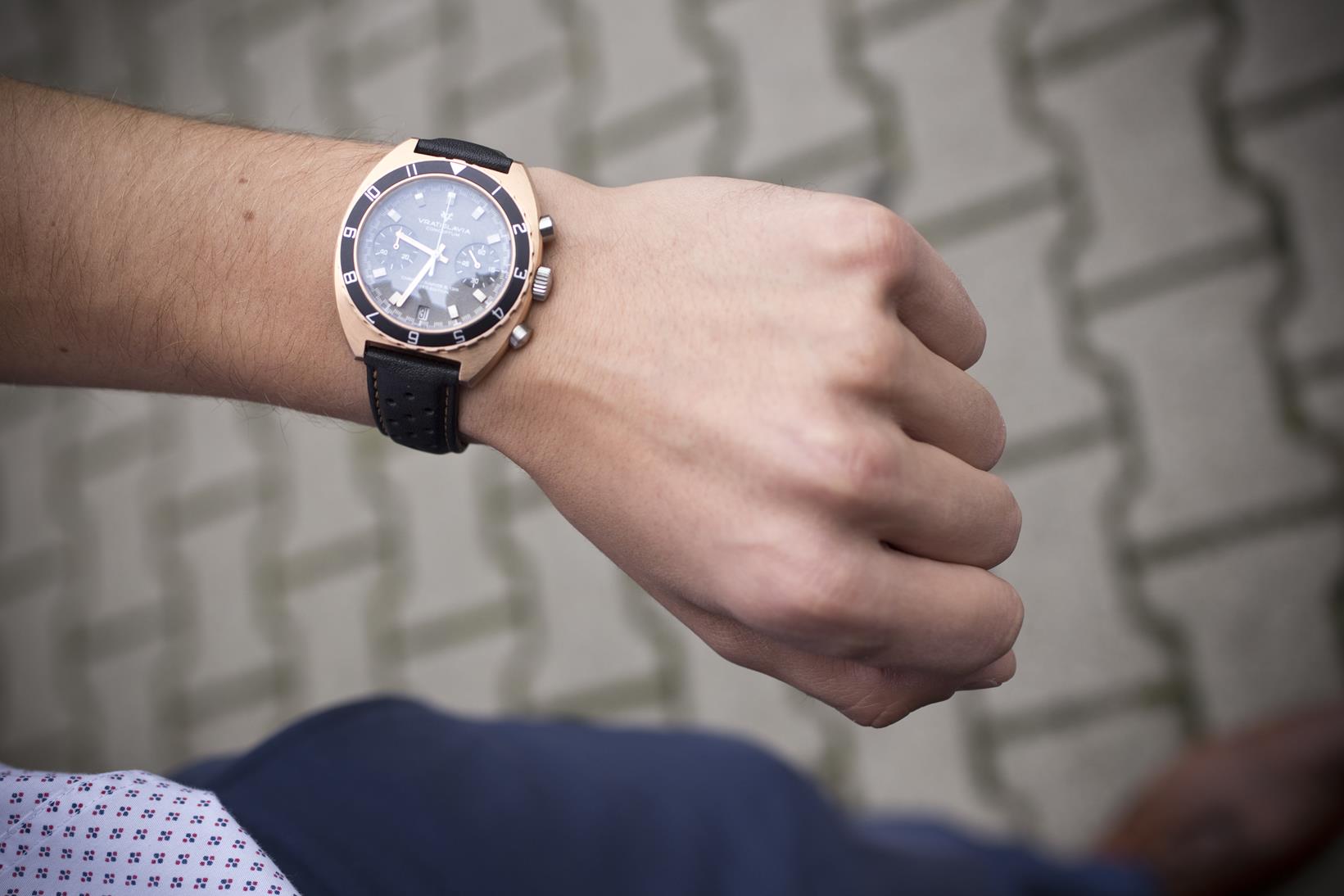 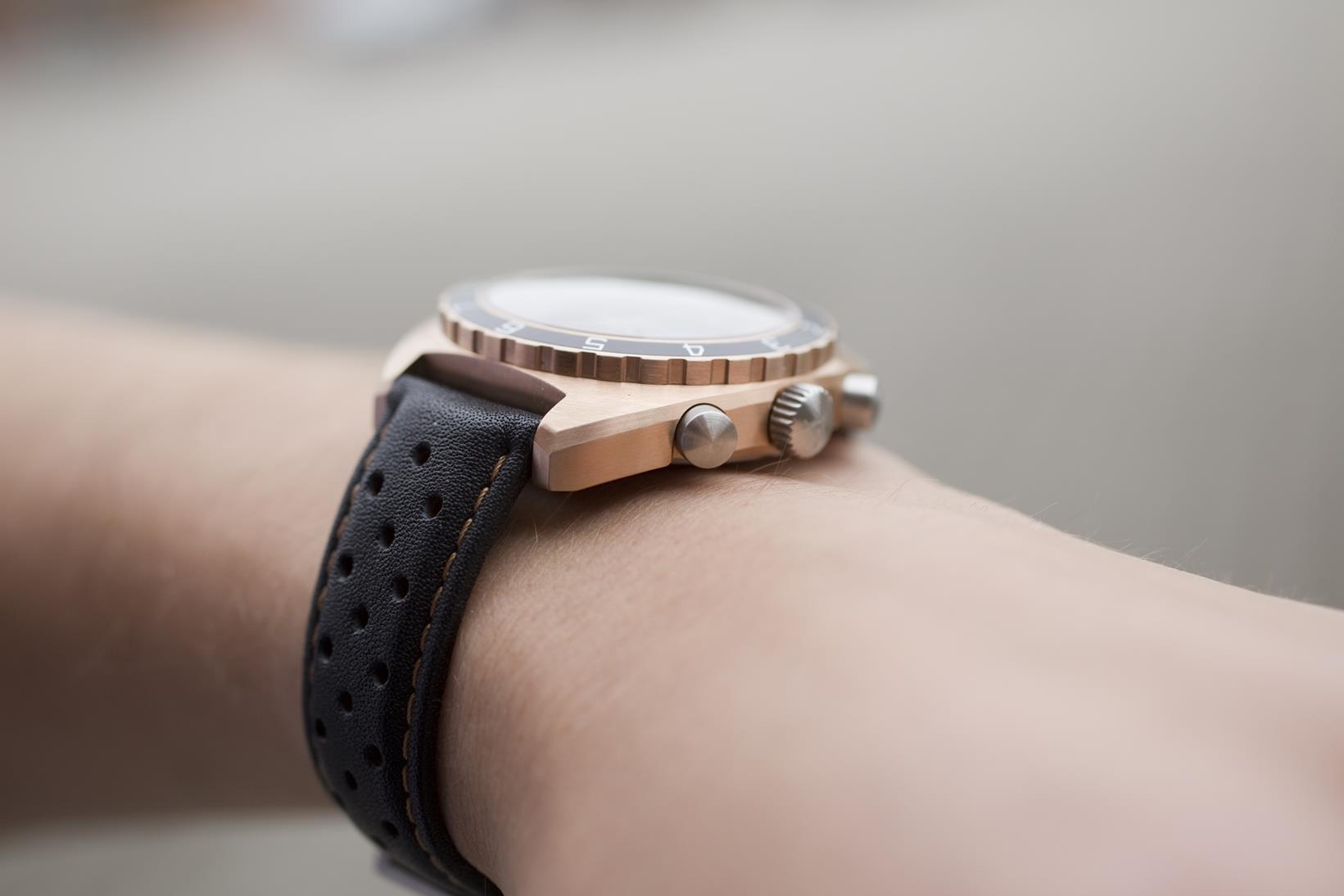 Returning to the shape of the case, looking from above resembles an egg with a cut top and bottom and notches for the strap, such a shape causes that the case has a larger surface area than in classic watches with a round case, which in turn adds to the massiveness I mentioned earlier . I sometimes see this shape of the case in chronographs from the 1960s and 1970s and certainly the case in Vratislavia’s chronographs is based on them for sure. 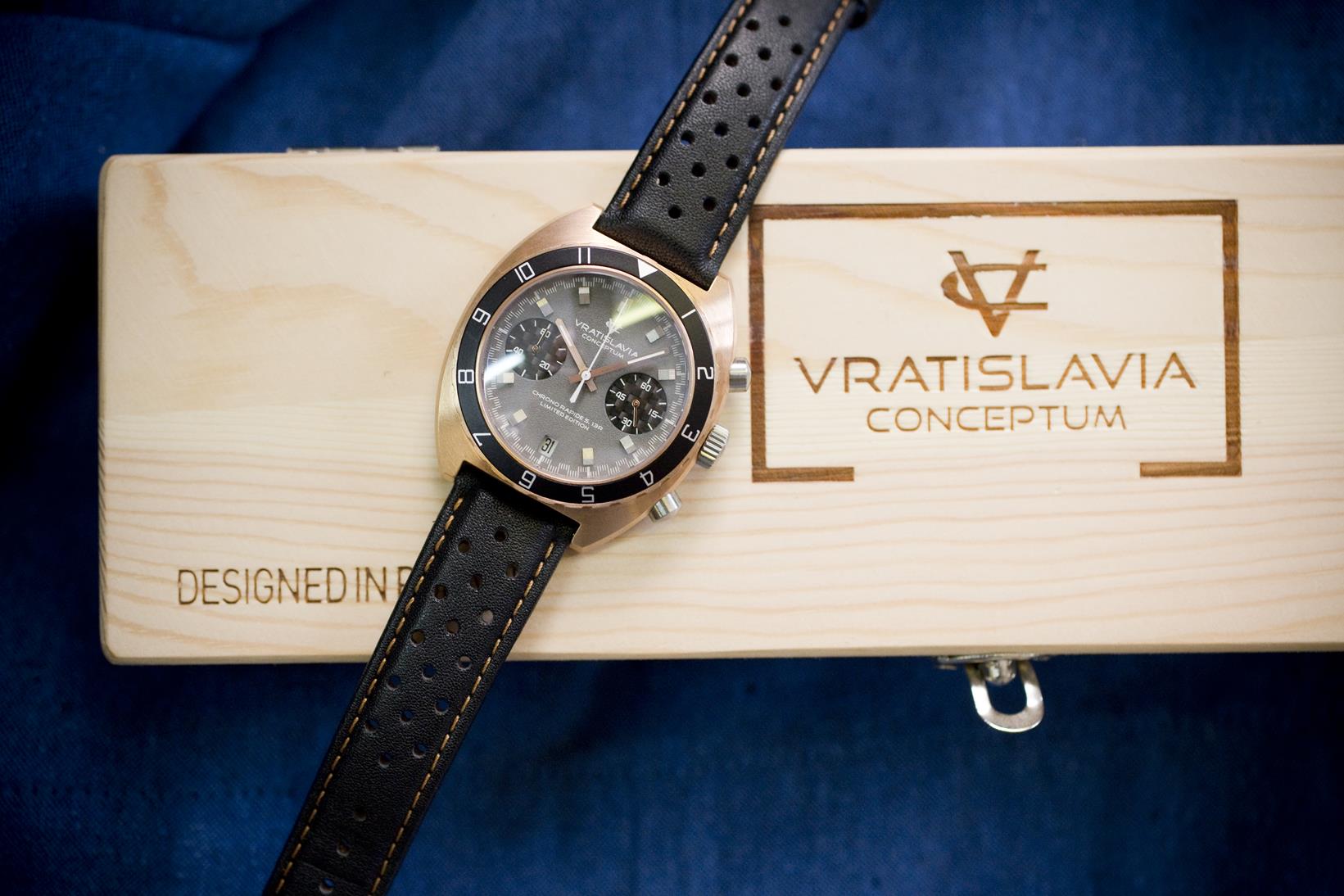 ChronoRapide S.13R is the first chronograph of Vratislavia with an case covered with a PVD coating. The coating is brushed, rose gold and in everyday use simply looks like the case was made of bronze. This is an interesting solution for people who like the color of bronze, but don’t like the fact that bronze is a soft alloy and that over time it is covered with patina in green, blue or black. Here the effect is that all the time we have an case that looks like the watch was bronze, freshly pulled out of the box. Brushing the case is made very carefully and does not differ in quality from watches at a much higher price shelf. Importantly, the watch is also nicely finished between the lugs, so there is absolutely nothing to complain about with the case. 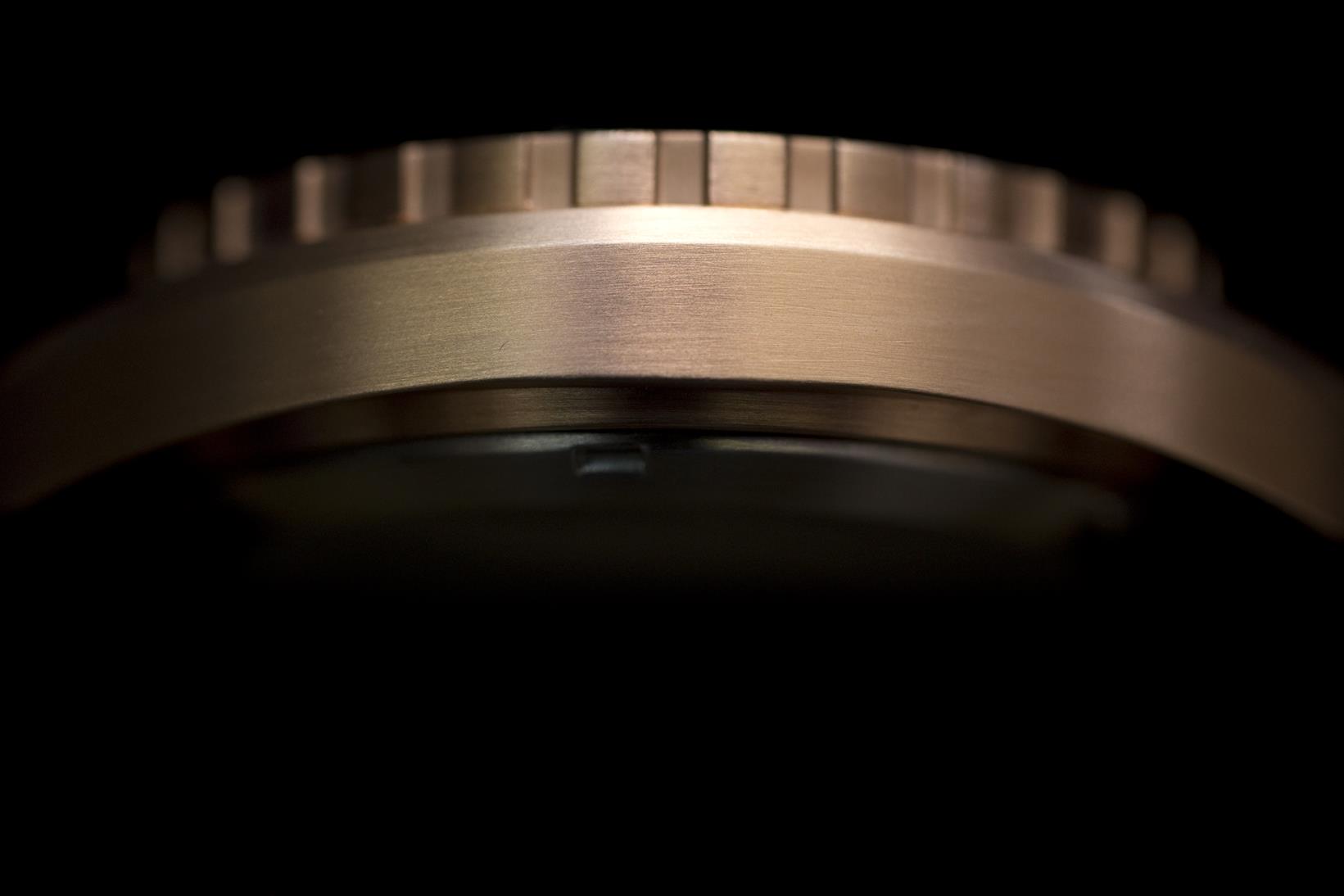 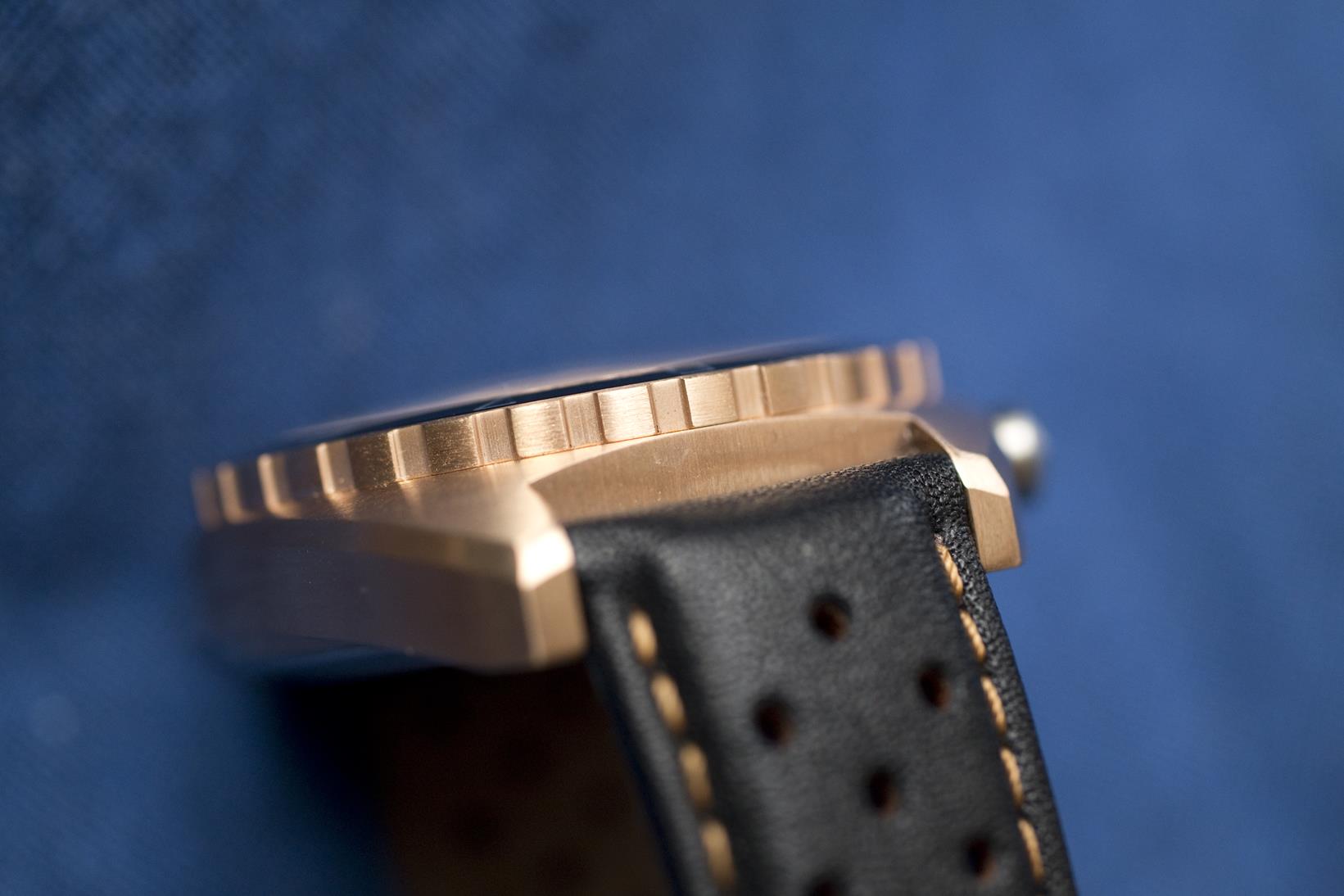 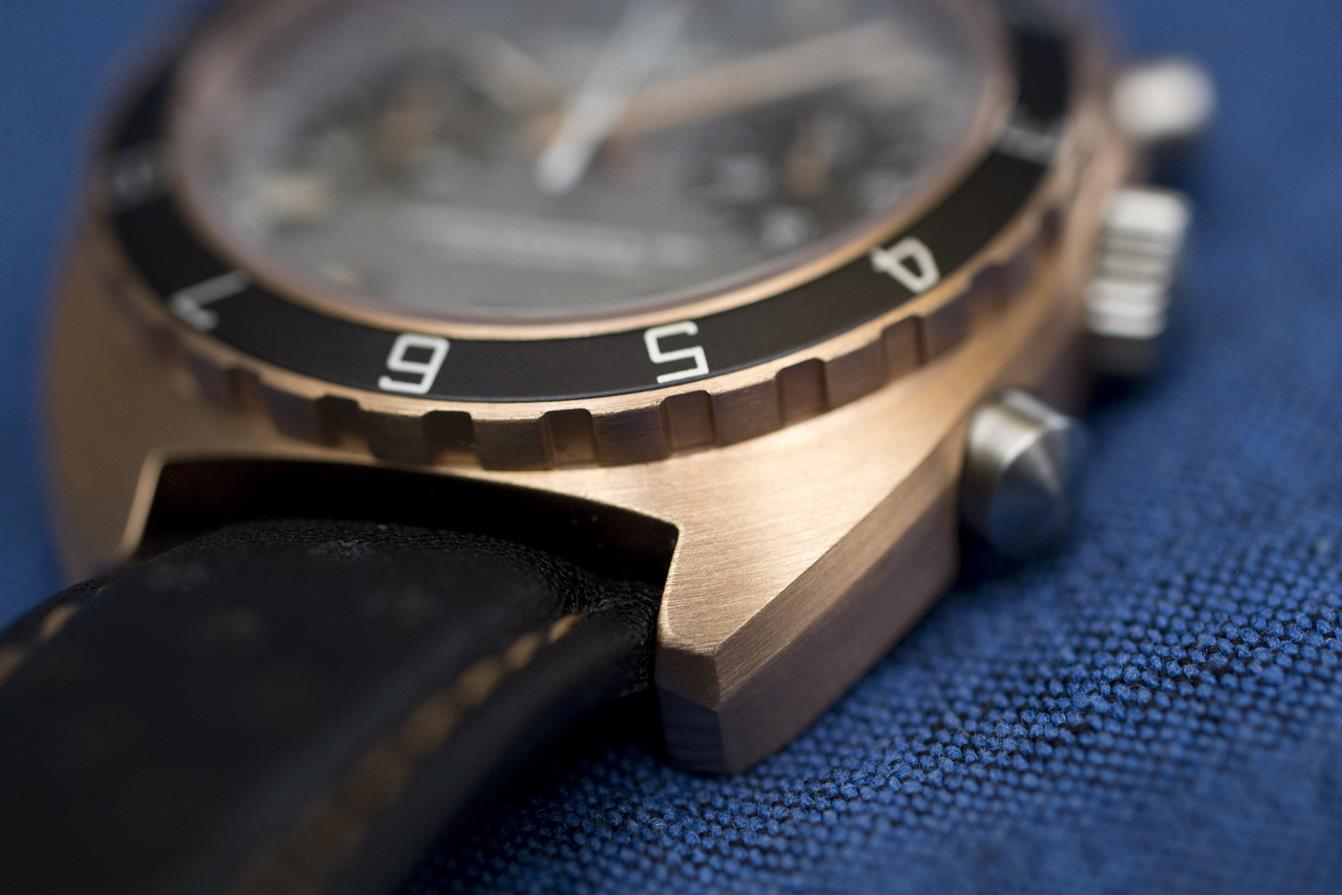 On the right side of the case there is a signed crown and buttons for operating the chronograph. The buttons are not covered with a PVD coating, so they are silver, which nicely distinguishes them from the case and harmonizes with the indices on the dial. Despite the fact that the crown is not tightened, the watch has a water resistance of 100m, which is not so obvious with a watch with a chronograph function. 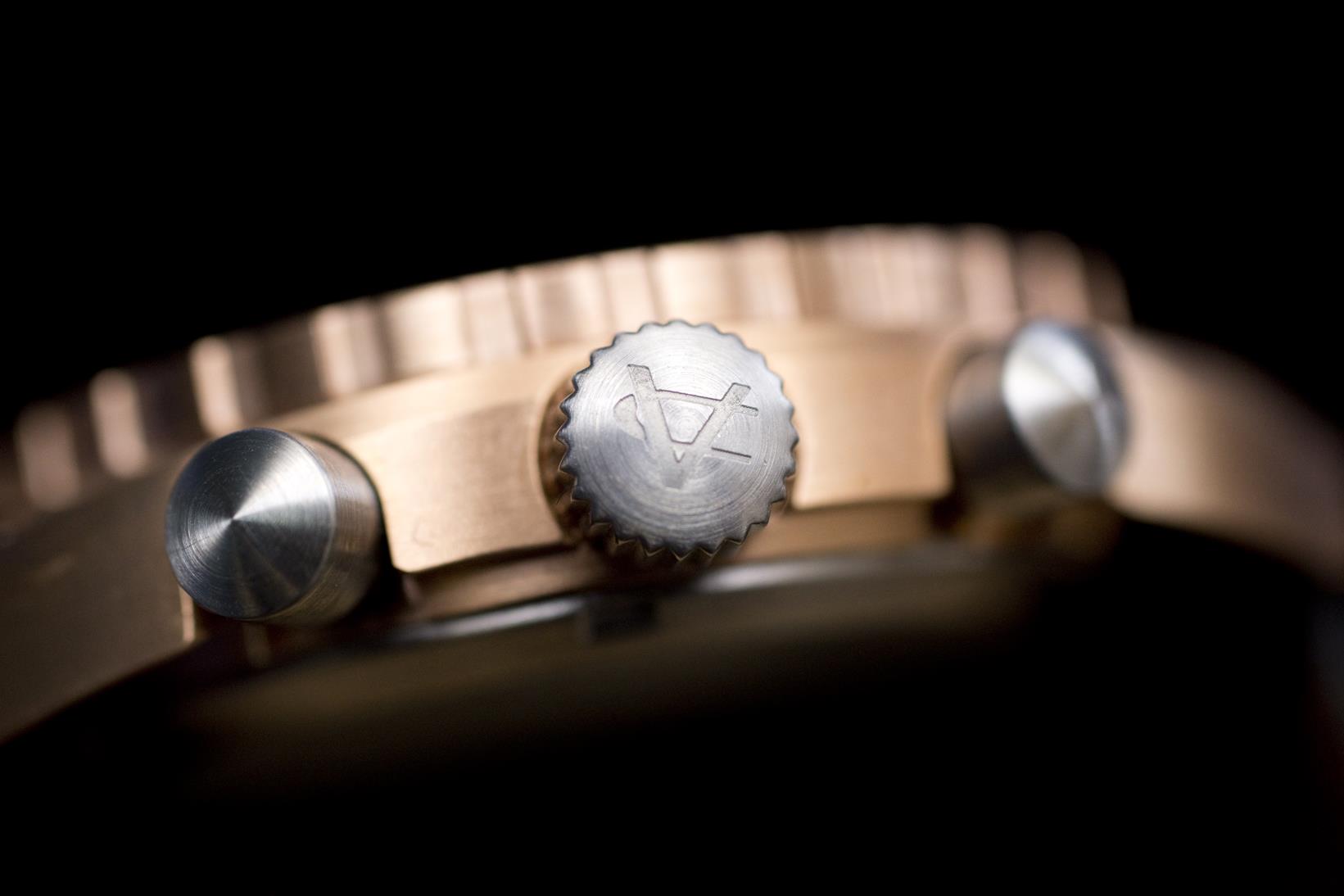 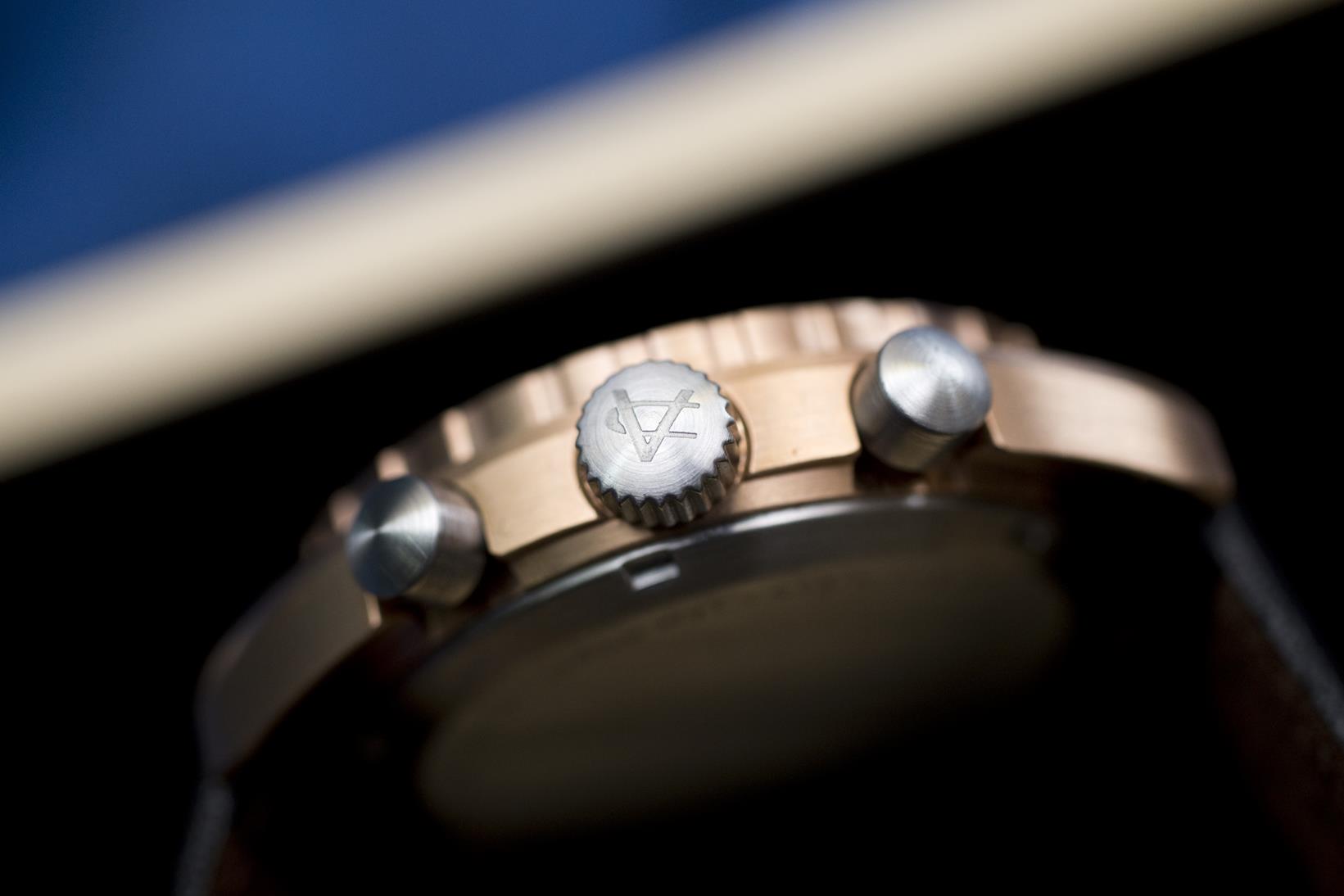 The watch is driven by the Miyota 6S21 quartz movement – it is a proven mechanism, installed in Vratislavia chronographs from S3 models. It was chosen by Marcin because of the location of the calendar and the chronograph totalizers that perfectly match these watches. Interestingly, unlike standard quartz movements, the chronograph hand works at a frequency of 4 beats per second, which I personally liked as a mechanical watch supporter. The most important for me, however, is that the movement has a second hand, because without it I always have the impression that the watch doesn’t work (the first chrono of Vratislavia, working on another mechanism did not have it).

I’ve always liked the gray dials, the more those with the rough surface like the one from ChronoRapide. Here, for good measure, we have high, brushed, silver indices that stand out beautifully from the dial and chronograph sub dials that have a carbon fiber texture and are in the lower level of the dial. And although this doesn’t seem unusual at first glance, it’s enough to bring the watch closer to the eyes and move it in several directions to see how nice these elements of the dial give! The indices are partly inclined, thanks to which they reflect light in different angles. The carbon fiber texture on the chronograph’s sub dials looks incredibly realistic, as if it were really made of interwoven carbon fiber. 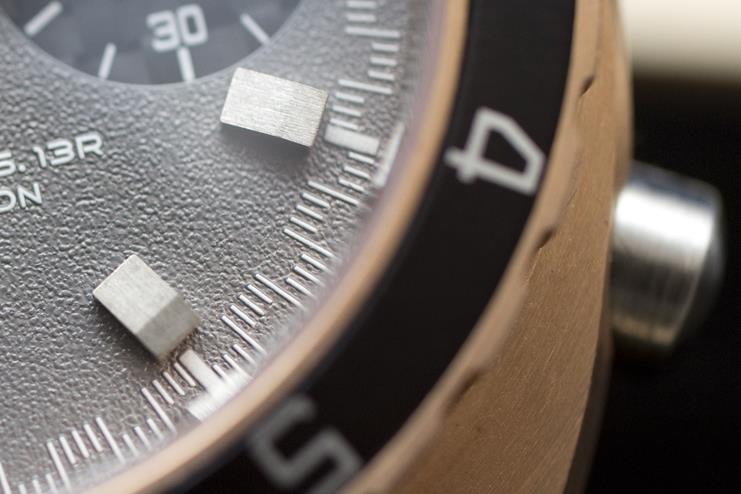 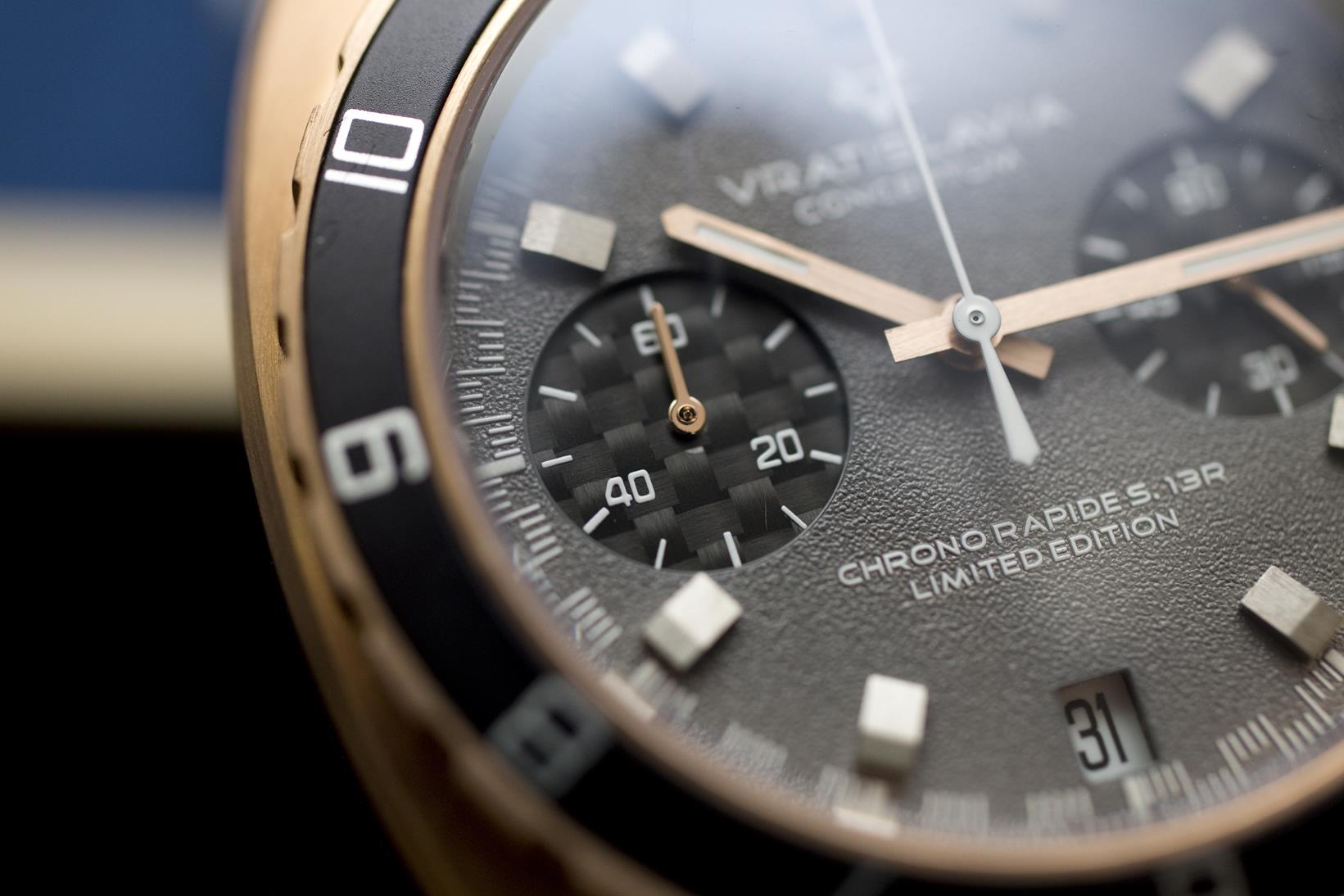 On the outer part of the dial there are seconds indices in the form of vertical white lines, additionally divided into 5 smaller lines, which alternately are in the lower, in the upper half of the second division. This second scale, especially when viewed from a greater distance, reminds me of the so-called chessboard of racing flag and fits perfectly into the design of the entire watch. 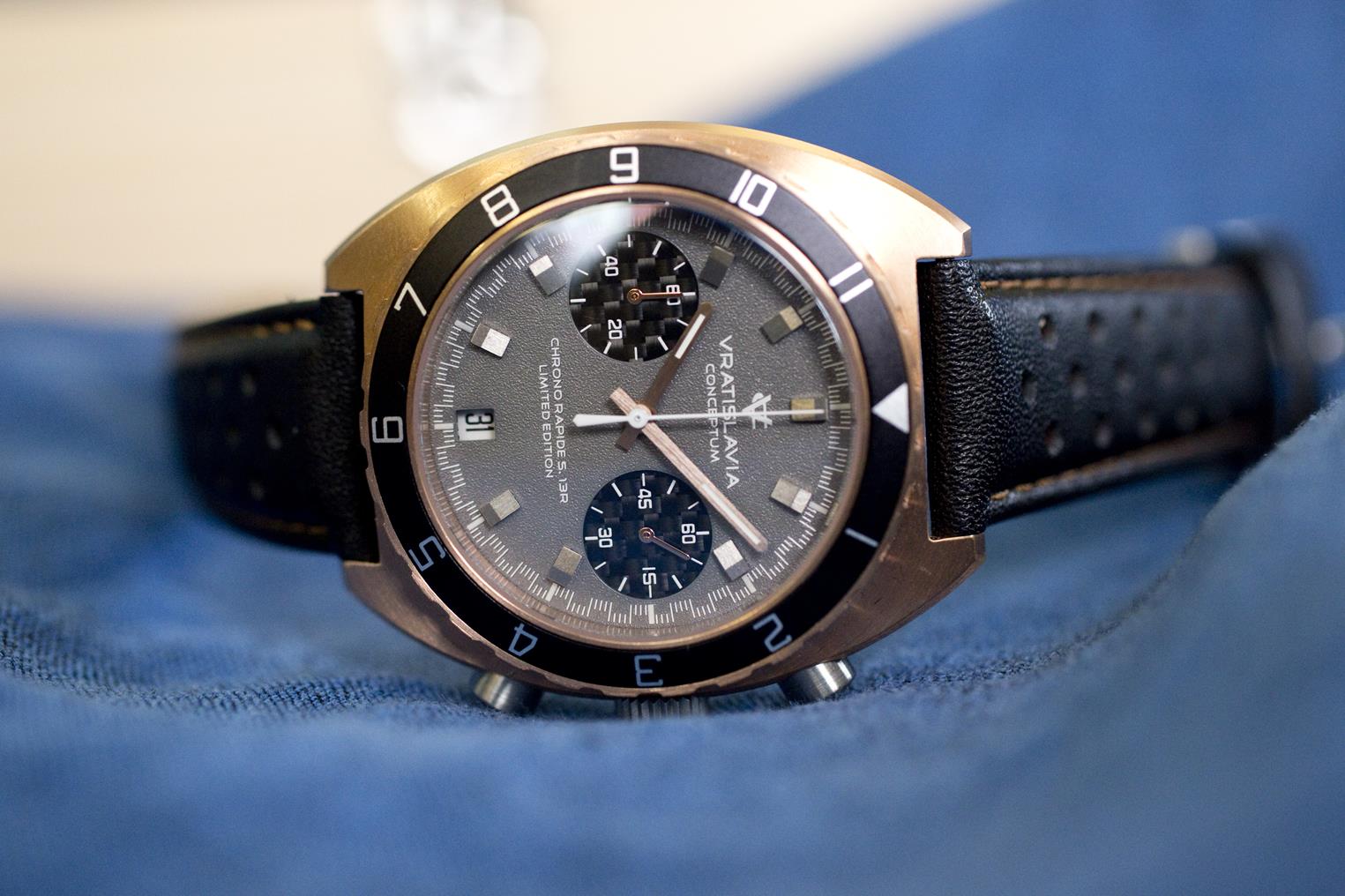 At the top of the dial is the manufacturer’s logo, and at the bottom of the model name and information that it is a “limited edition”. Ideally, the date is located where the 6 o’clock index should be. The window, like the indices, is rectangular, so despite the fact that they are black numbers on a white background, it is not noticeable. The window is a simple indentation in the dial, you can see through it how thick the multilayer dial is, because the date display is very deep inside this notch. I believe that the date display is well thought out in this model and in the case of this watch it could not be placed better, which once again proves how well thought out the watches with the Vratislavia logo are. 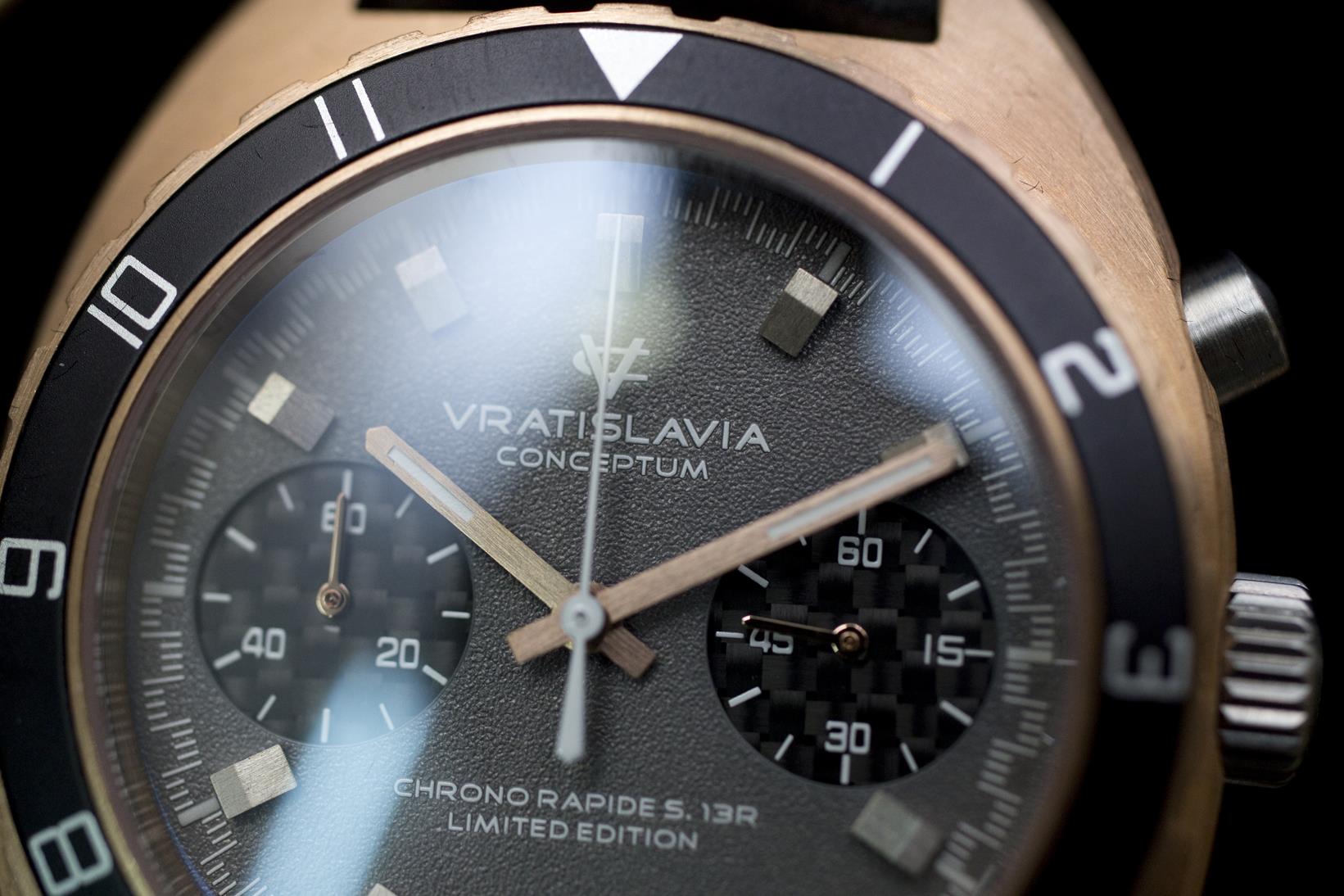 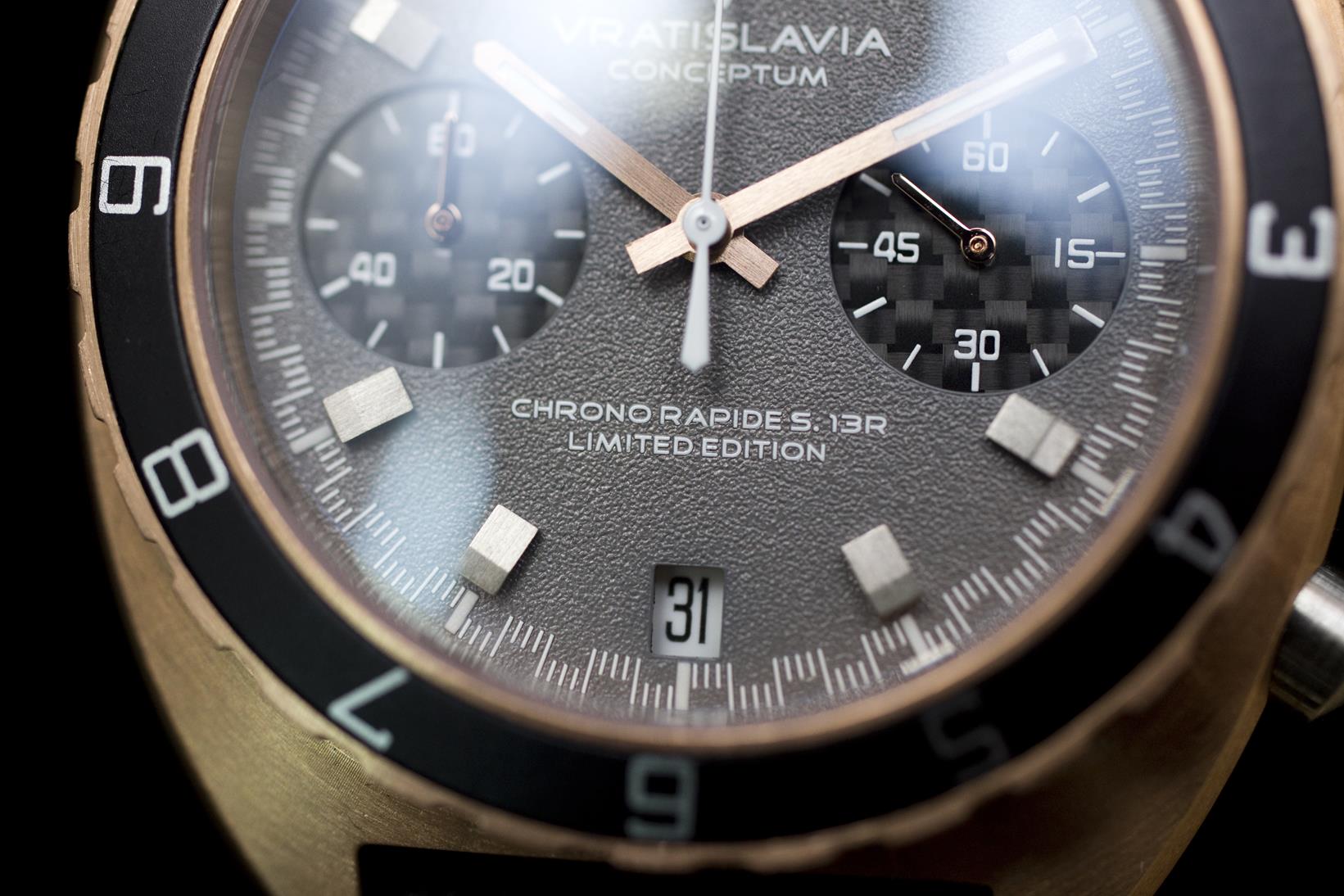 The classic, simple hands, in addition to the chronograph hands, have a rose gold color. The chronograph’s hand is white and until we press the upper pusher on the side of the case, it is politely waiting aimed at 12 o’clock. The hands are placed high and together with high indices give the dial a strongly three-dimensional appearance … This watch draws handfuls of the large amount of space it has under glass . And since we are already at the glass, ChronoRapide has a slightly doomed sapphire glass with an internal anti-reflective coating, which when viewed from a sharp angle, we will see how it gives the watch an interesting look. 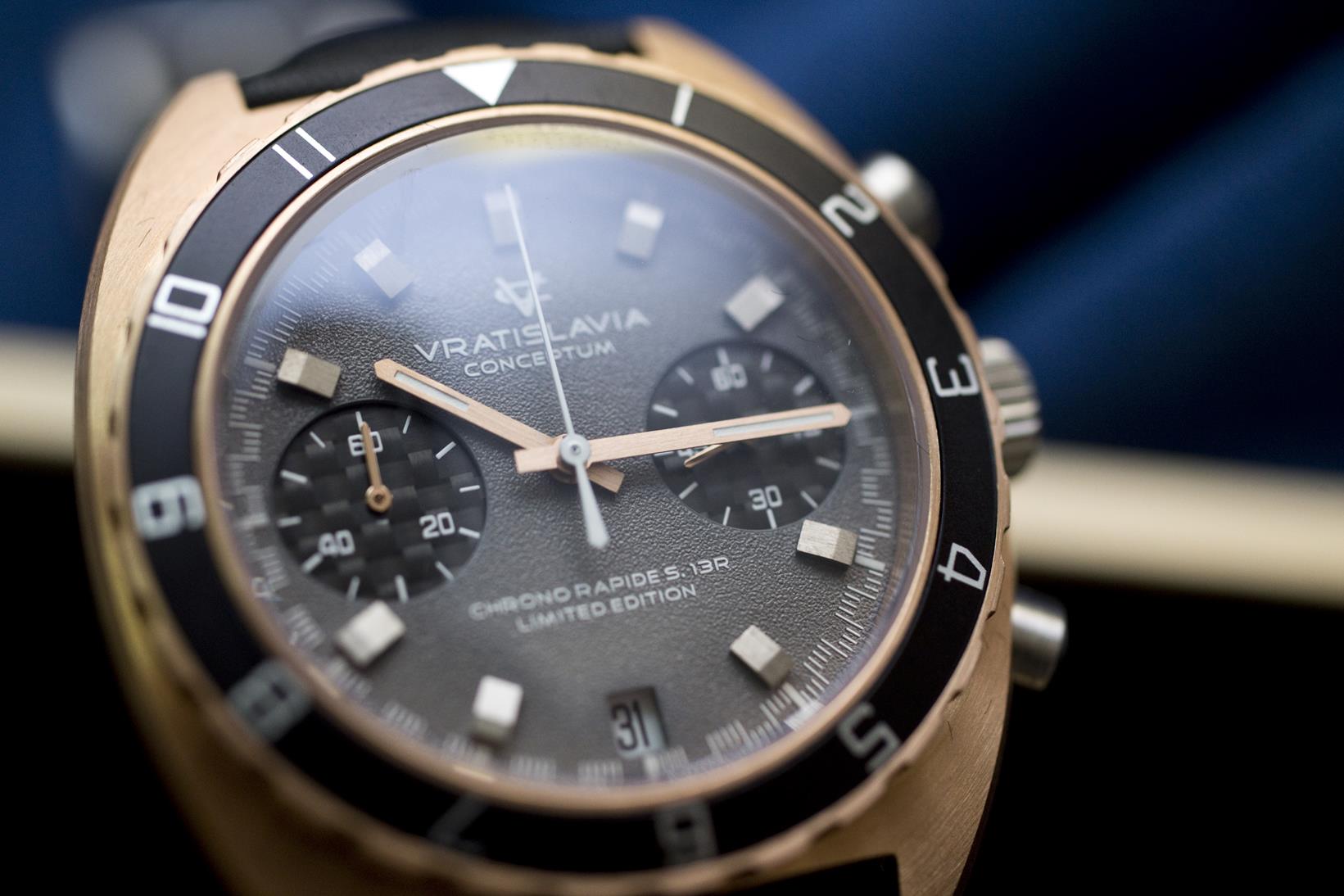 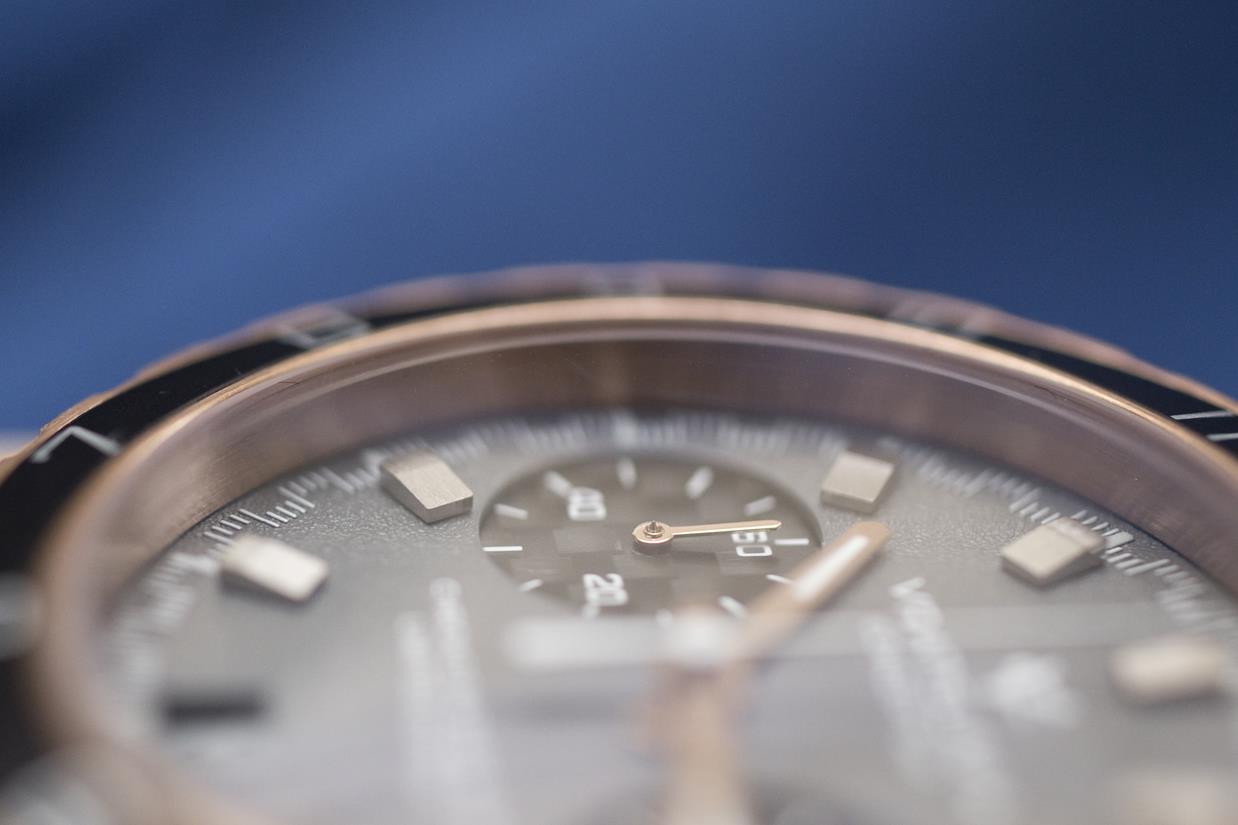 The watch has a symbolic lume – blue on the minute indices (every 5 minutes) and green on the hands. The places painted with luminescent mass are small, so they do not give overwhelmingly strong light, but they shine amazingly long. And it looks like this: 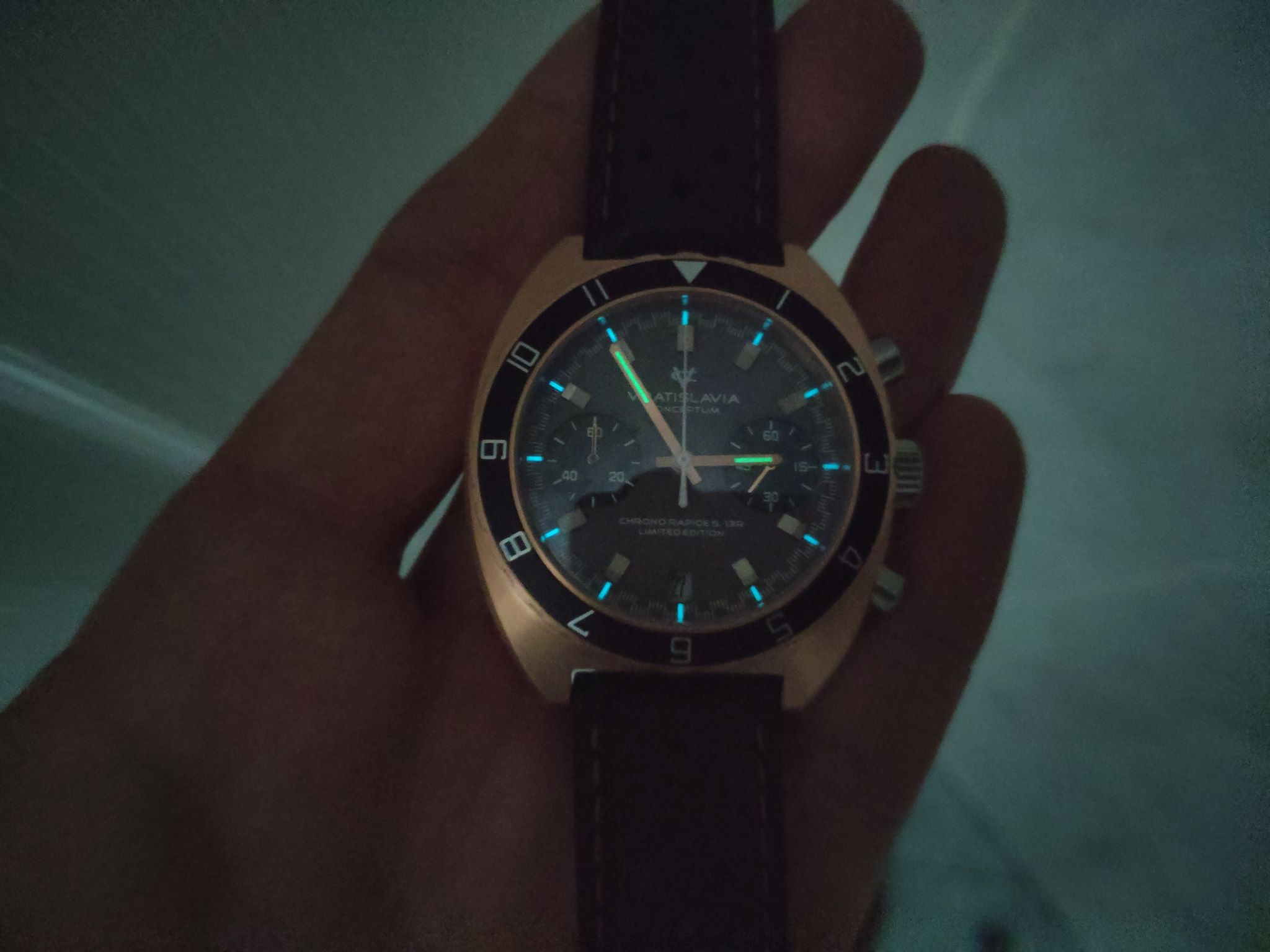 For me, this is the biggest minus of this watch and something that does not give me peace every time I look at it. The bezel, like the case, is coated with a rose gold PVD coating, has nice wide teeth, but is stationary and looks like it was part of the case (it’s not). Visually, I just don’t really like it because it makes the case look more blocky. Let it be still, but it would look a lot better if it stuck a little from the case. Looking at the bezel, you don’t even have to try to move it to know it’s stationary. It is probably my deviation and there is a lot of people who will not mind it, and even a good fit will be an advantage for them, unfortunately it is not for me. 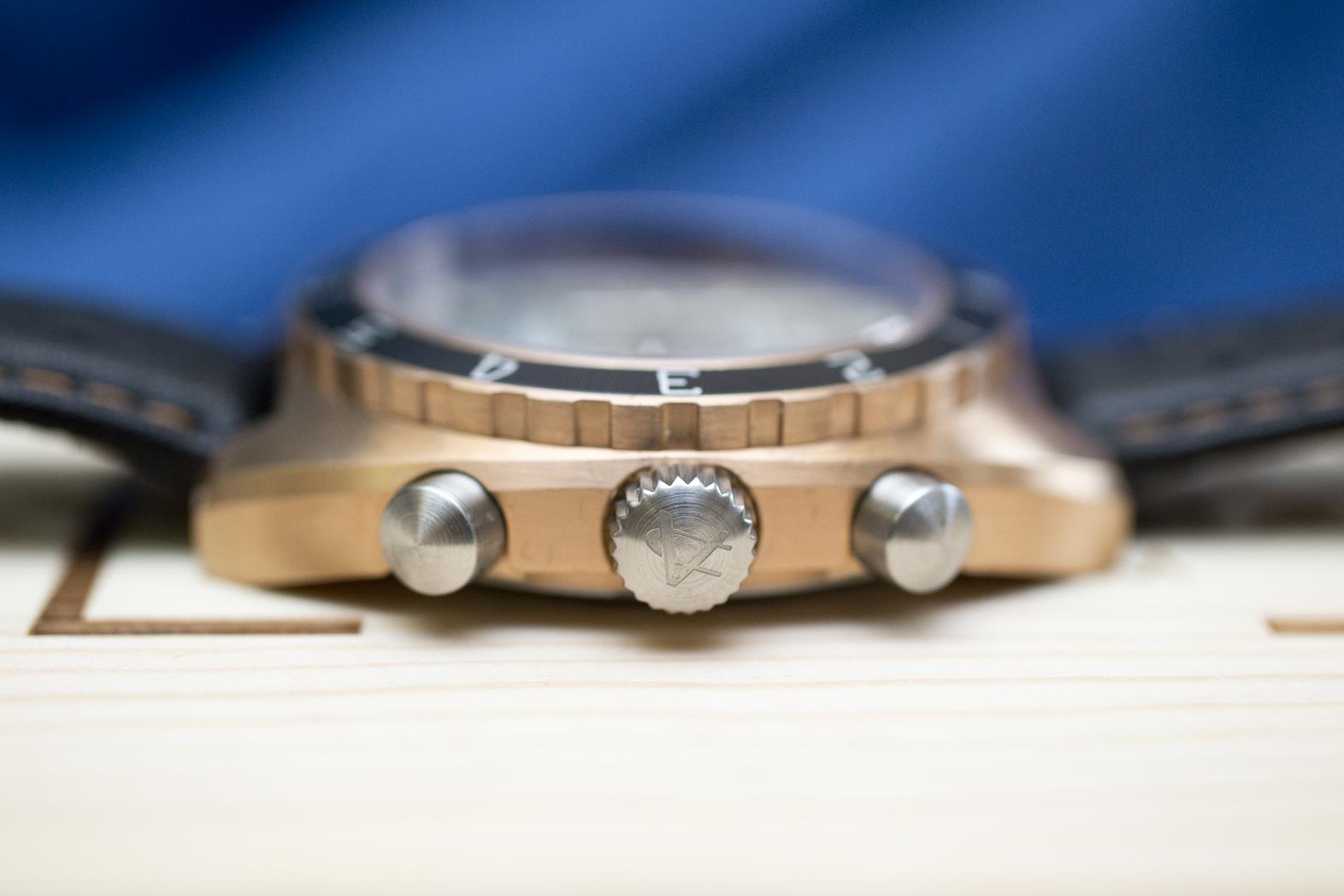 The bezel insert is aluminum, painted black with silver numbers at the hourly index level. At 12 o’clock the index on the insert is in the form of a silver triangle – standard. The aluminum insert may scratch over time, but its replacement is simple and cheap, and from the information obtained from Marcin I know that it has a large supply of these inserts, so people buying this model don’t have to worry about the look of their watch in an indefinite future 😉 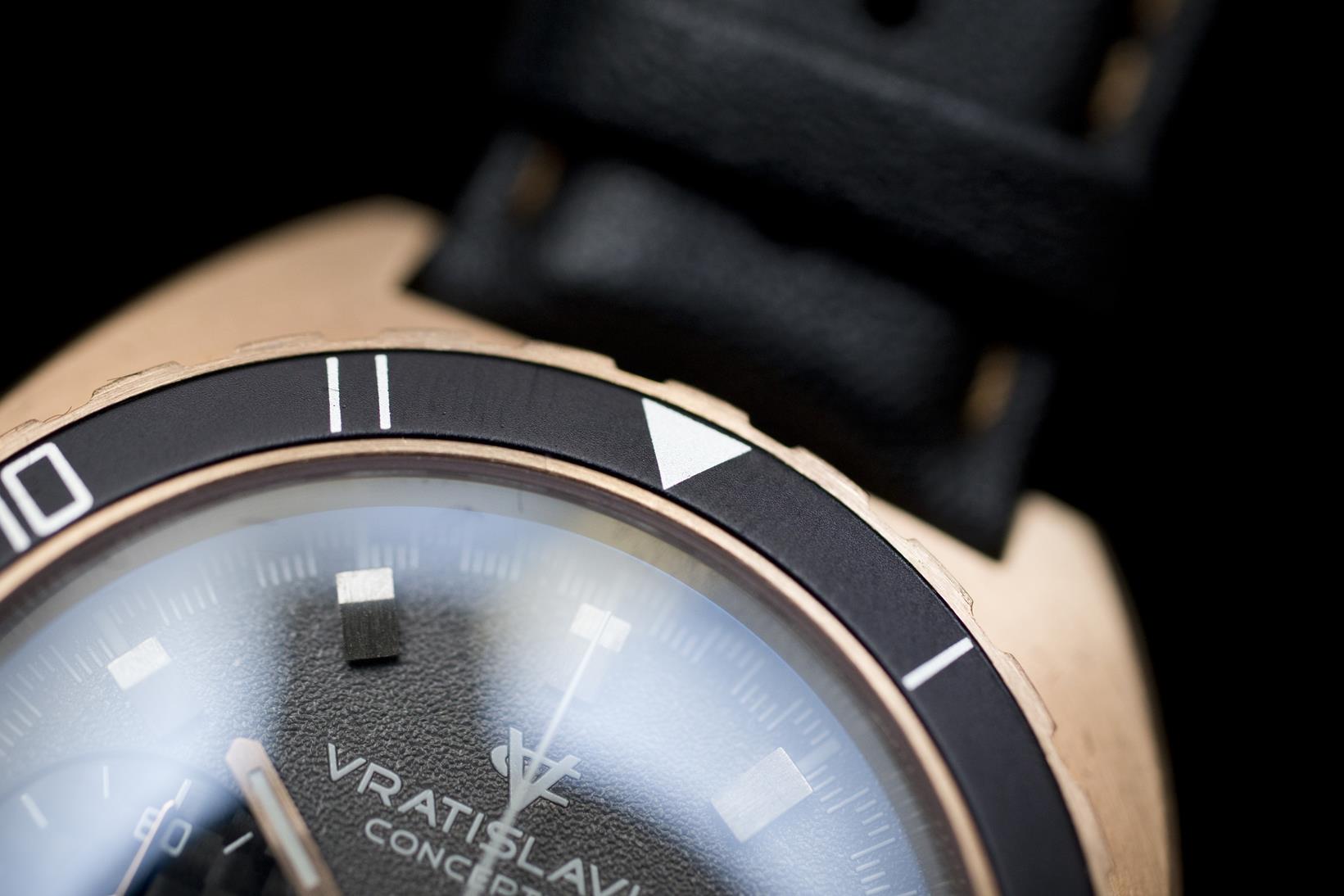 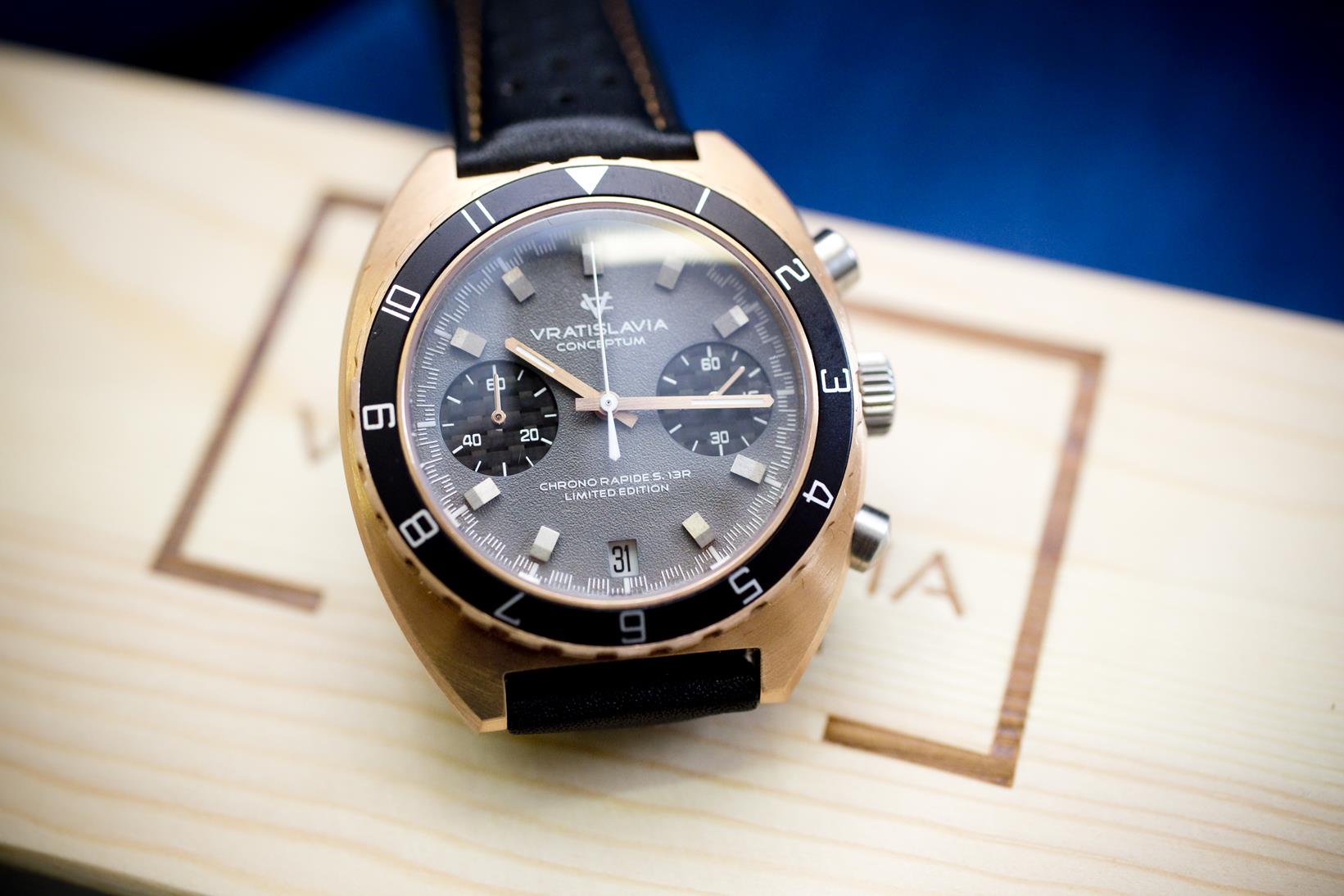 It’s the simplest case back I’ve ever dealt with, not counting on vintage watches. The case back is screwed down and is only brushed steel with engraved information about the watch on the periphery. Basically, in another case I would complain about such a solution, but for this watch, due to its color, such a case back is extremely suitable. 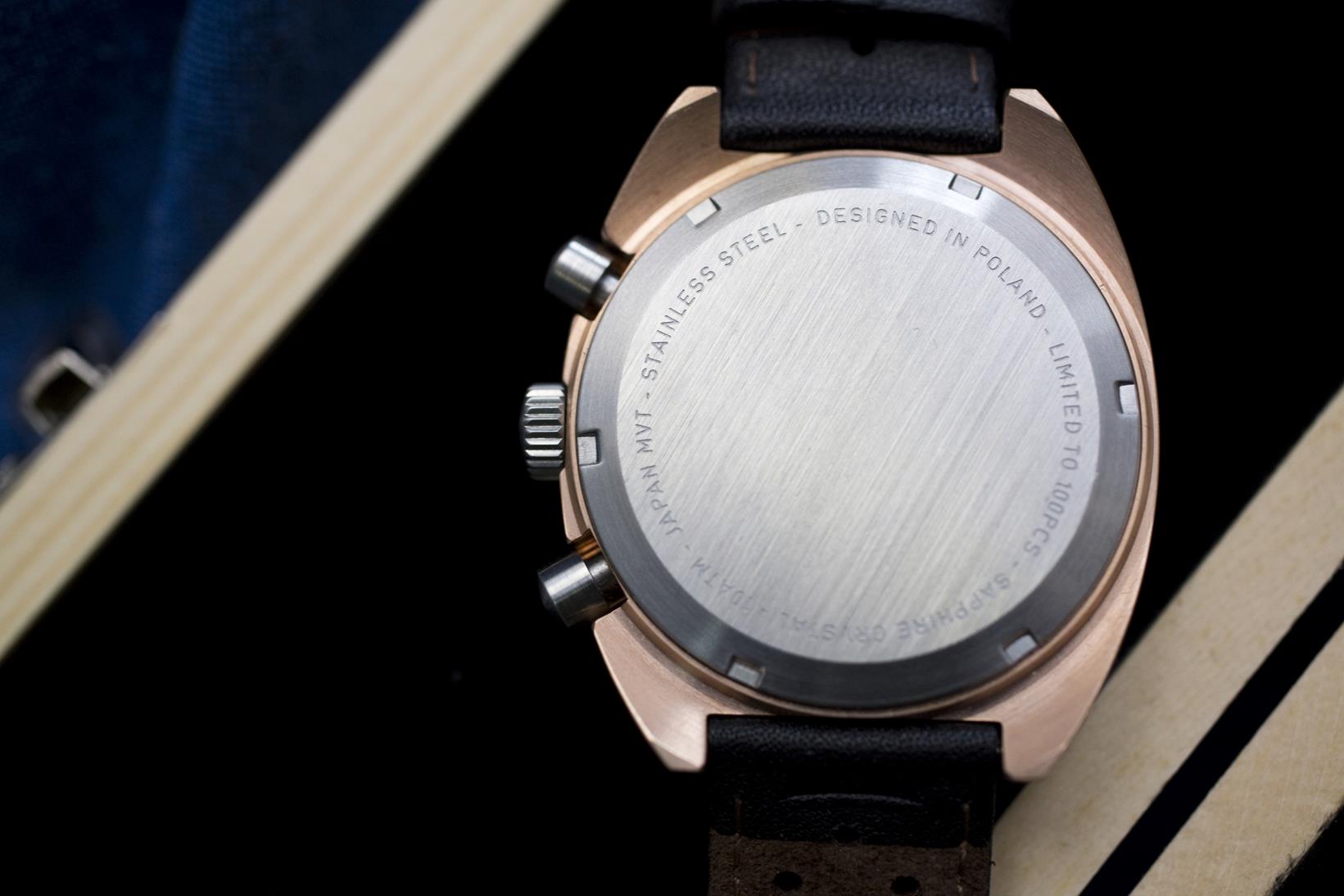 The black strap with a width of 20mm narrowing to 18mm by the buckle surprised me – I was expecting something stiff and medium quality, while the strap is soft, smells nice and is decently made. From the bottom, the strap is lined with brown suede leather, thanks to which the watch does not slip on the hand, and the strap is pleasant in contact with the skin.

The belt is called Rally – is slightly thickened on pins and has 3 rows of holes to about half the length of each part. Such straps look nice with automotive-related chronographs and it’s no different in this case. The color stitching matches the case and everything looks really nice and consistent. 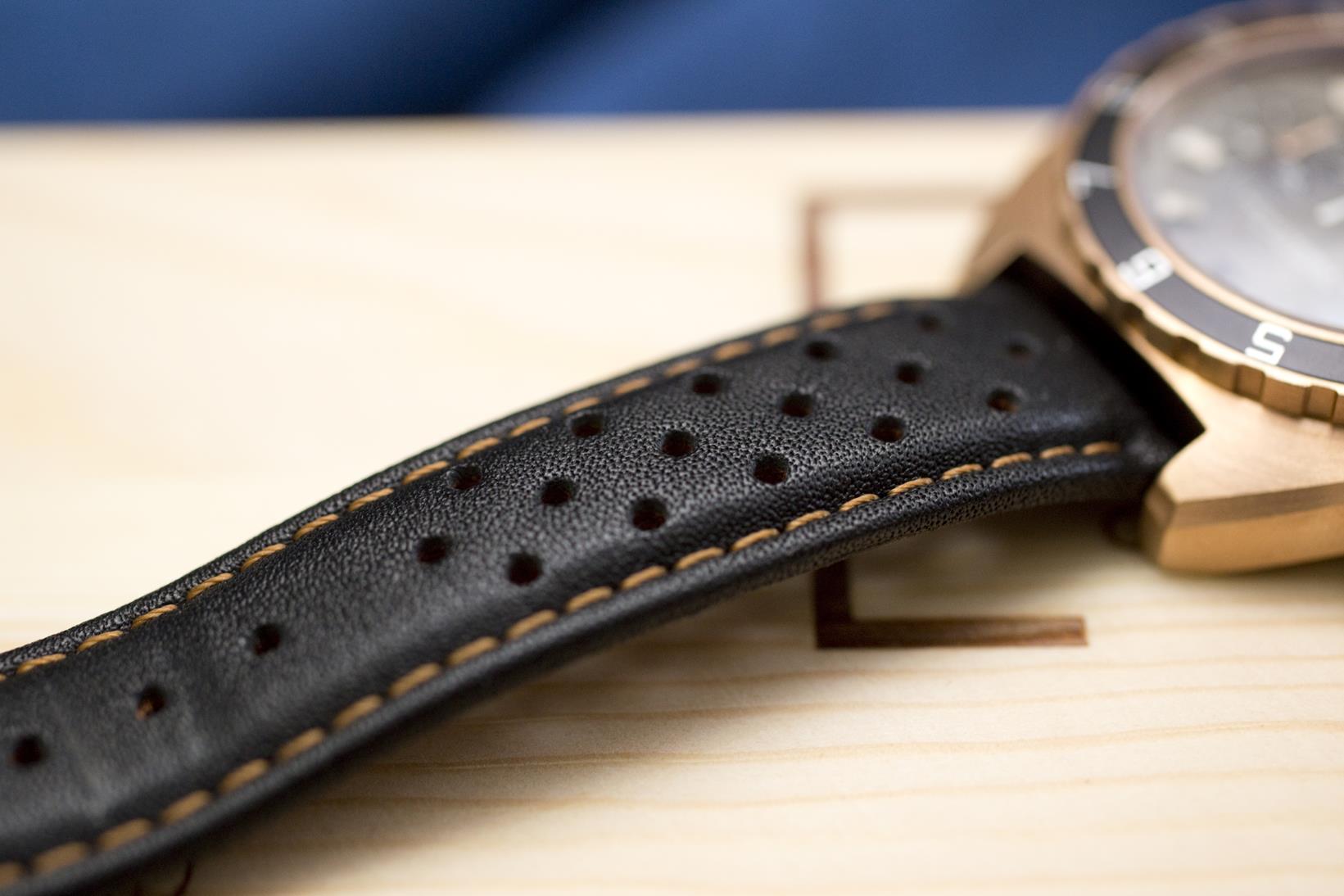 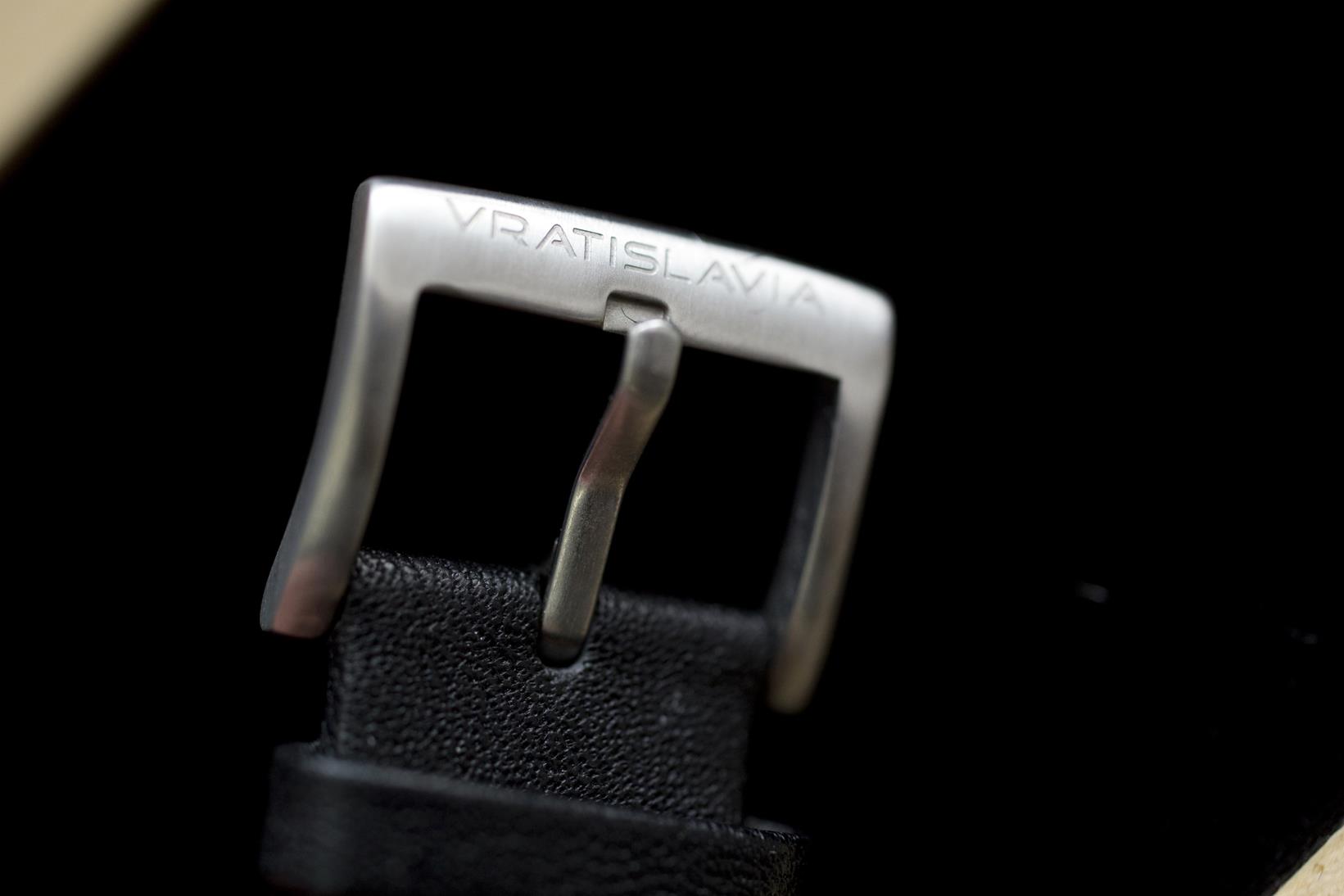 The second color version of this watch is sold together with a beads of rice bracelet and it is a pity that Marcin didn’t send me this watch because I am very interested in the quality of the bracelet supplied from Vratislavia.

The design of ChronoRapide S13R is to refer to a modern sports car, not only one that can be seen on racing tracks, but also one found on the streets. In my opinion, this watch fits the atmosphere very well and although I wouldn’t buy it for myself, it’s a gift for a person who does not require the watch to be mechanical – by all means. In fact, apart from the “welded” bezel, I have nothing to complain about. It’s important that each subsequent design of Vratislavia is of ever better quality and at the moment these watches already present a really high level at a very affordable price. In this model, the luma has obviously been improved, which previously left much to be desired, and now it finally shines for a few good hours. Between the watch I reviewed now and the first chronograph of Vratislavia, which I also once had in my collection, there is a quality abyss that bodes well for the future of this Polish brand.

I also have good news for fans of the Vratislavia brand, who have so far complained about the way these watches were purchased – from mid-October the Vratislavia online store will be launched with quick payments, and the vast majority of future projects will be sold only when they are in stock, i.e. without Pre orders (watches will be available immediately). 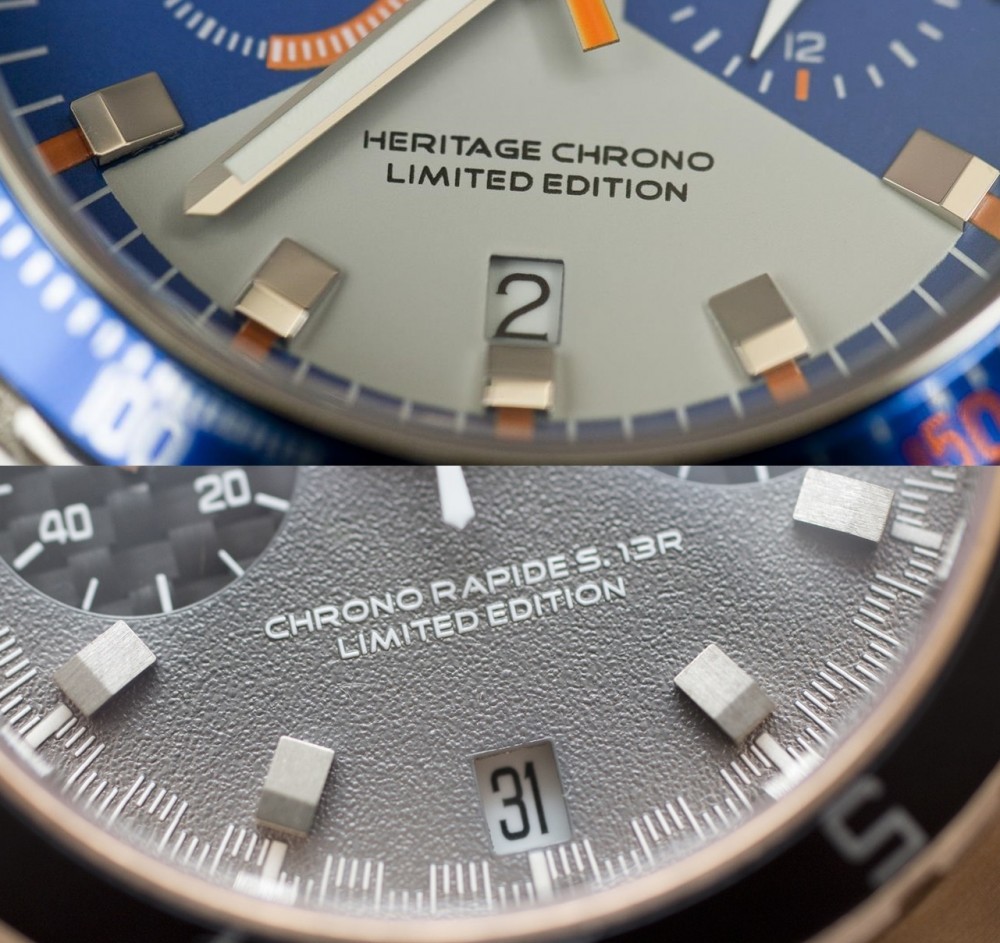