Rectangular watches are for old people

That’s what my wife and probably many others say. There’s something in it that such watches can be associated with older people or stiffeners … this is probably due to the fact that the most of those watches have typical suit features, and the shape of the case additionally adds simplicity to it.
Fortunately, you don’t have to be an old man or a stiff one to buy such a watch (just like you don’t have to be a pilot to buy a pilot watch and a diver to buy a diver watch 😉). Because Epos, which I used to wear to a suit, quickly got bored, I decided to try my hand with the new Vratislavia square. What was the effect? I invite you to read.

The watches of this company are a bit like pokemons – once you buy one, you want to have them all. This behavior is often seen by other collectors of watches – on forums and facebook groups you can find pictures of boxes full of Vratislavia watches, in principle this is a phenomenon I have never seen in any other watch company. 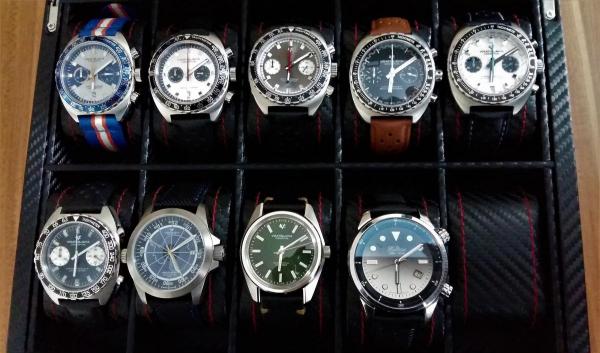 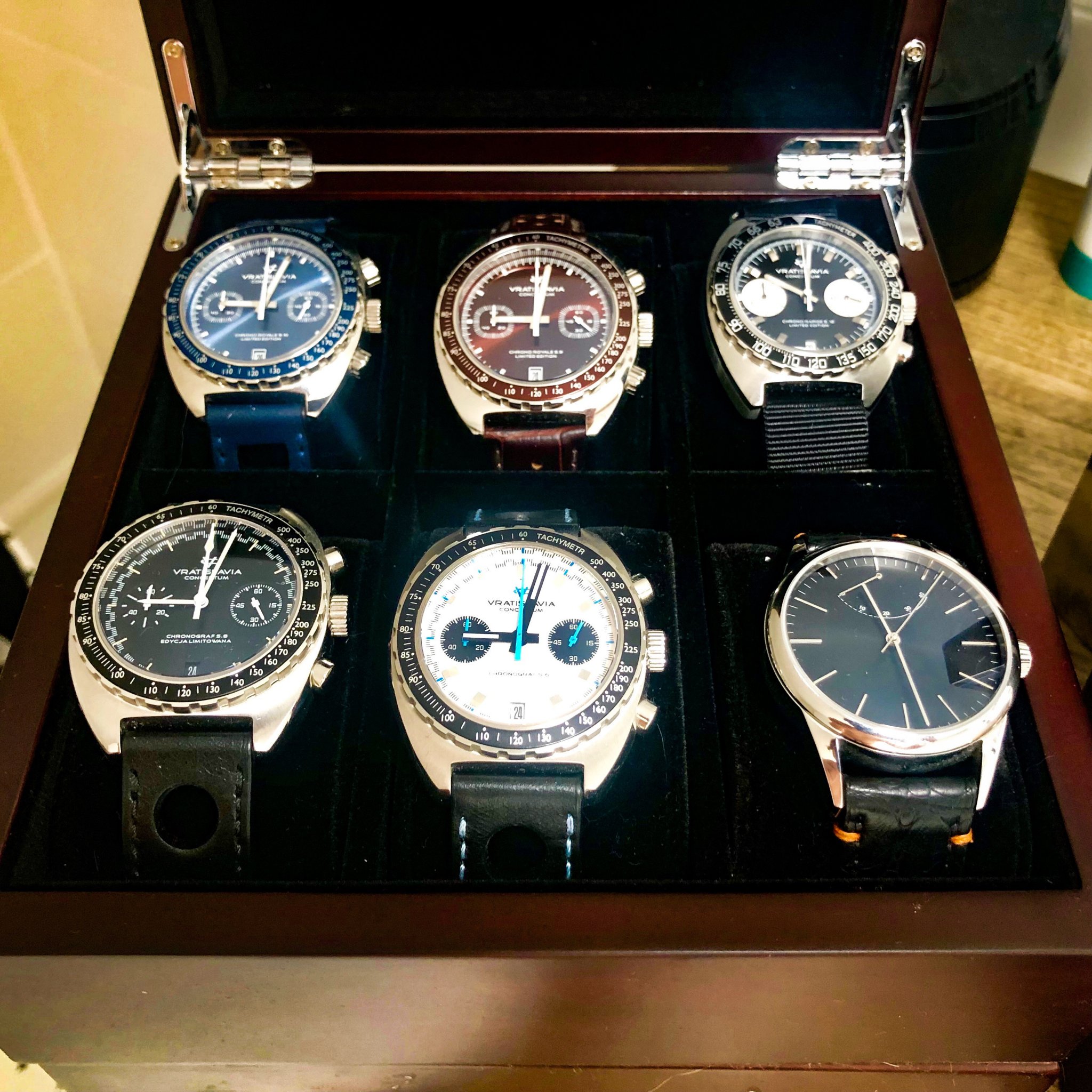 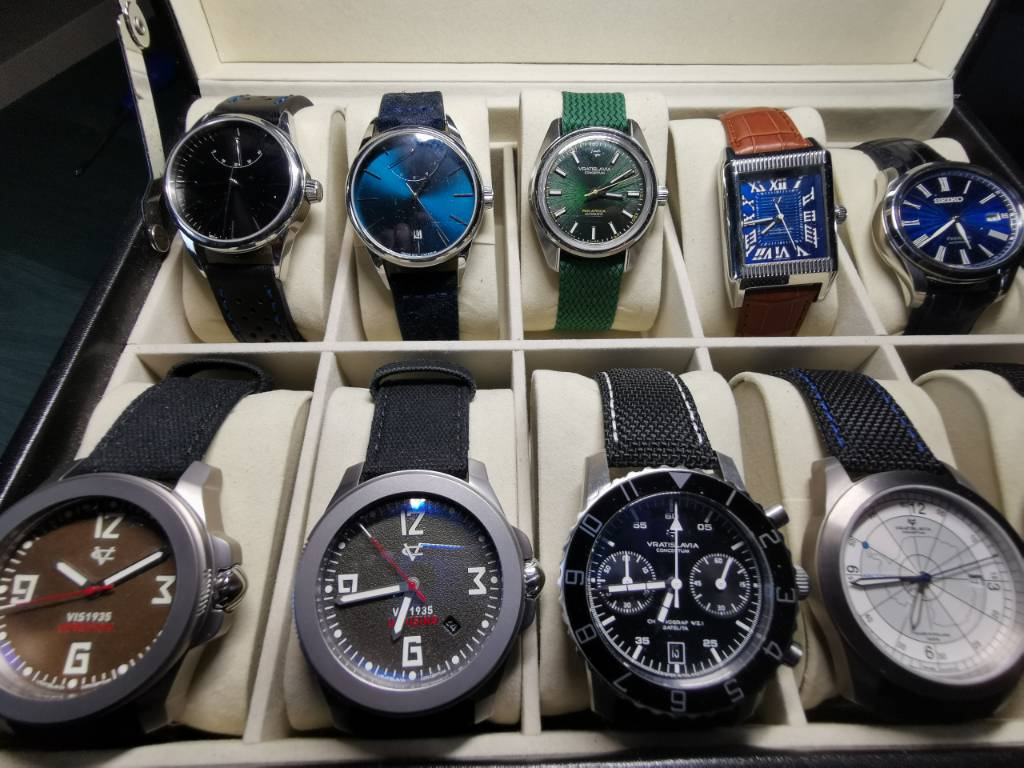 That’s how it was with me, now I already have 4 Vratislavia and almost all new models tempt me. Marcin – owner of the brand, in a conversation with me told me that it’s because he puts his heart in creating these watches. There is something in it, because each time a new model of this company appears, I cann’t resist the impression that the project is really well thought out and refined.
We had several attempts to make an appointment in Vratislavia but, despite the fact that we are closest to Vratislavia from all Polish watch companies, Marcin consistently refuses to meet us. Marcin – people will be happy to see how you work and read what problems you have to deal with when creating watches 😉 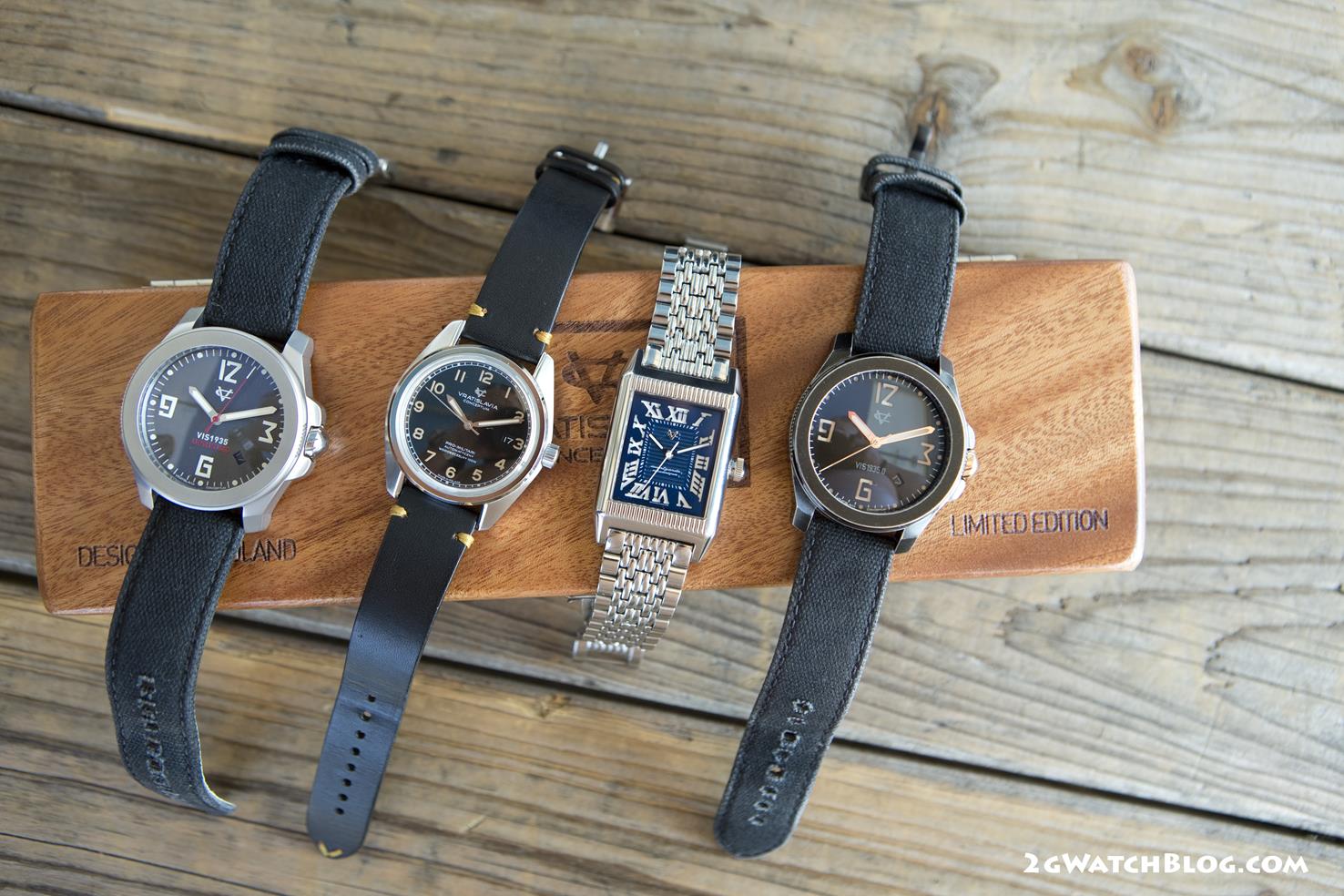 Wooden rectangular casket … All Vratislavia watches come in rectangular packaging, they differ only in material and workmanship. The casket is pretty but the quality does not knock on your knees – it is light, too light for a wooden box of this size. In the center is lined with a polyurethane sponge. It does not bother me, I’m waring a watch, not a box on my hands, I prefer that the budget is intended for the quality of the watch, not the box. 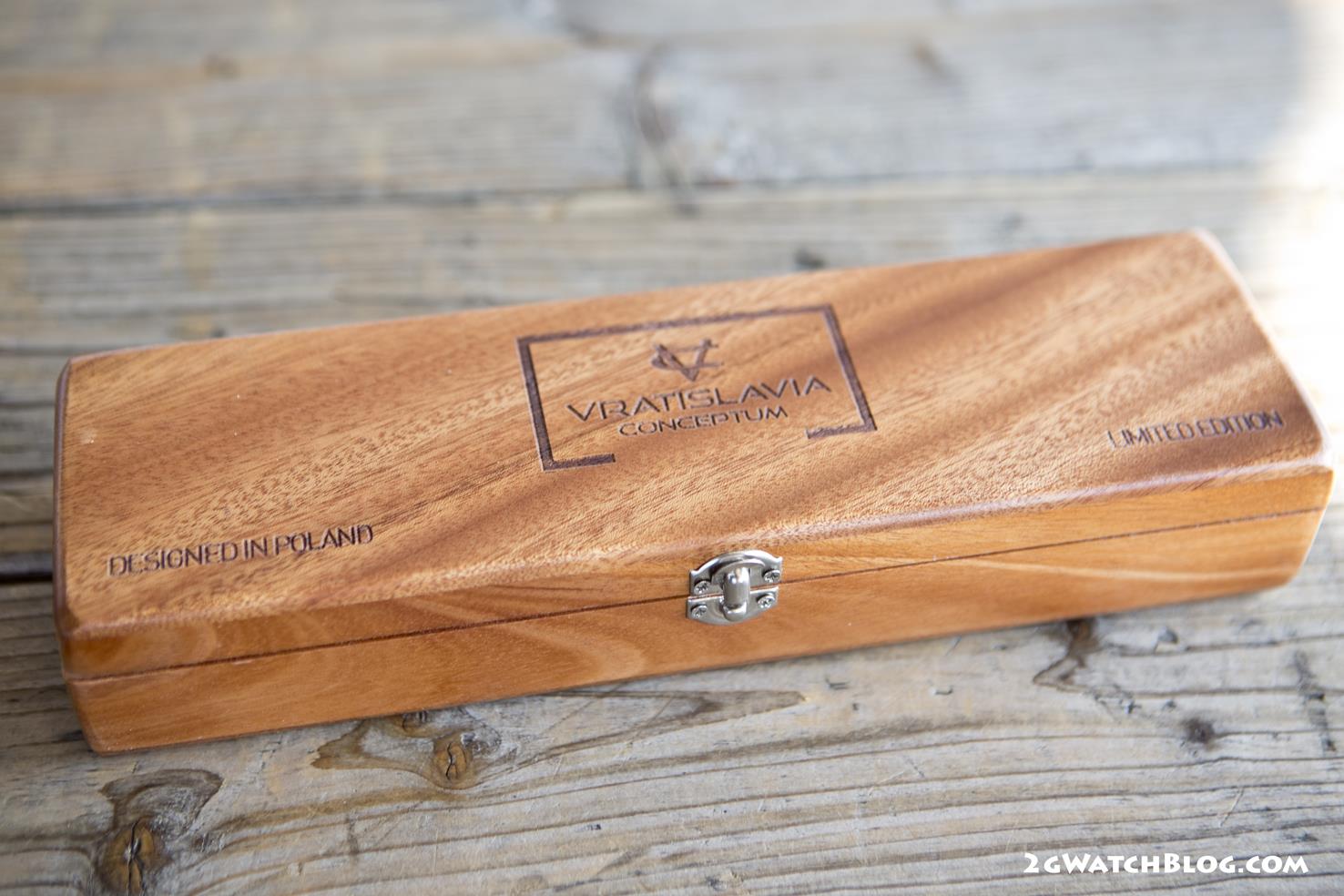 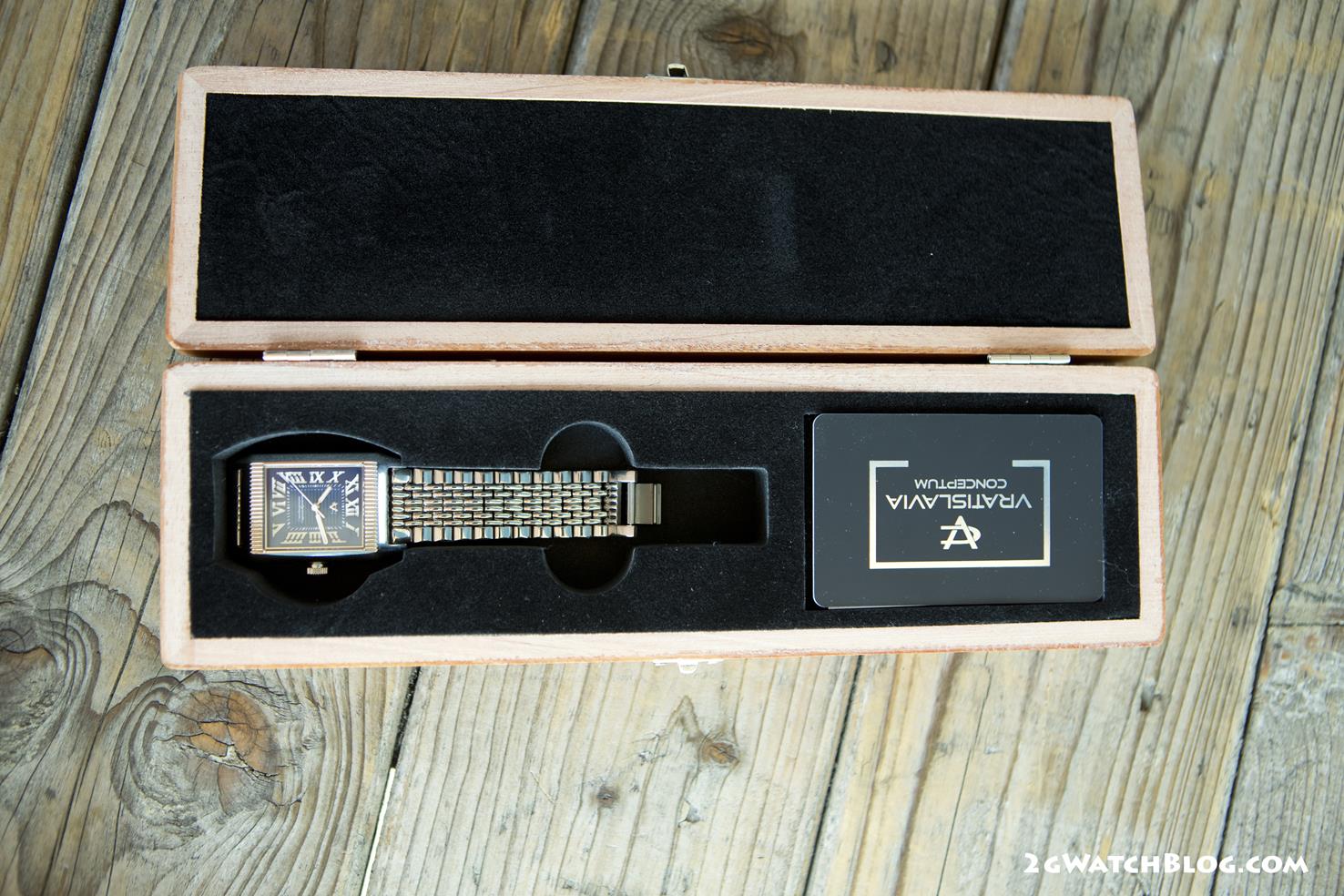 The case is reminiscent of an Jaeger LeCoultre Reverso watch and there is nothing to cheat – its design was modeled precisely on this well-known timepiece. Much, however, differs between the two watches and the case themselves, so it would be difficult to call this watch a “fake with another logo”. For some reasons, I like the case of Vratislavia even more than JLC.

The first thing that strikes the eye is the fact that the case seems more massive than it could be due to its dimensions … above all, it’s hard to believe that the watch is only 9.6mm thick. The width of the case is 31mm and the distance of lug to lug is 48.5mm, these dimensions are very versatile so that the size of the case fits perfectly and certainly does not look bad on larger and smaller wrists than mine. 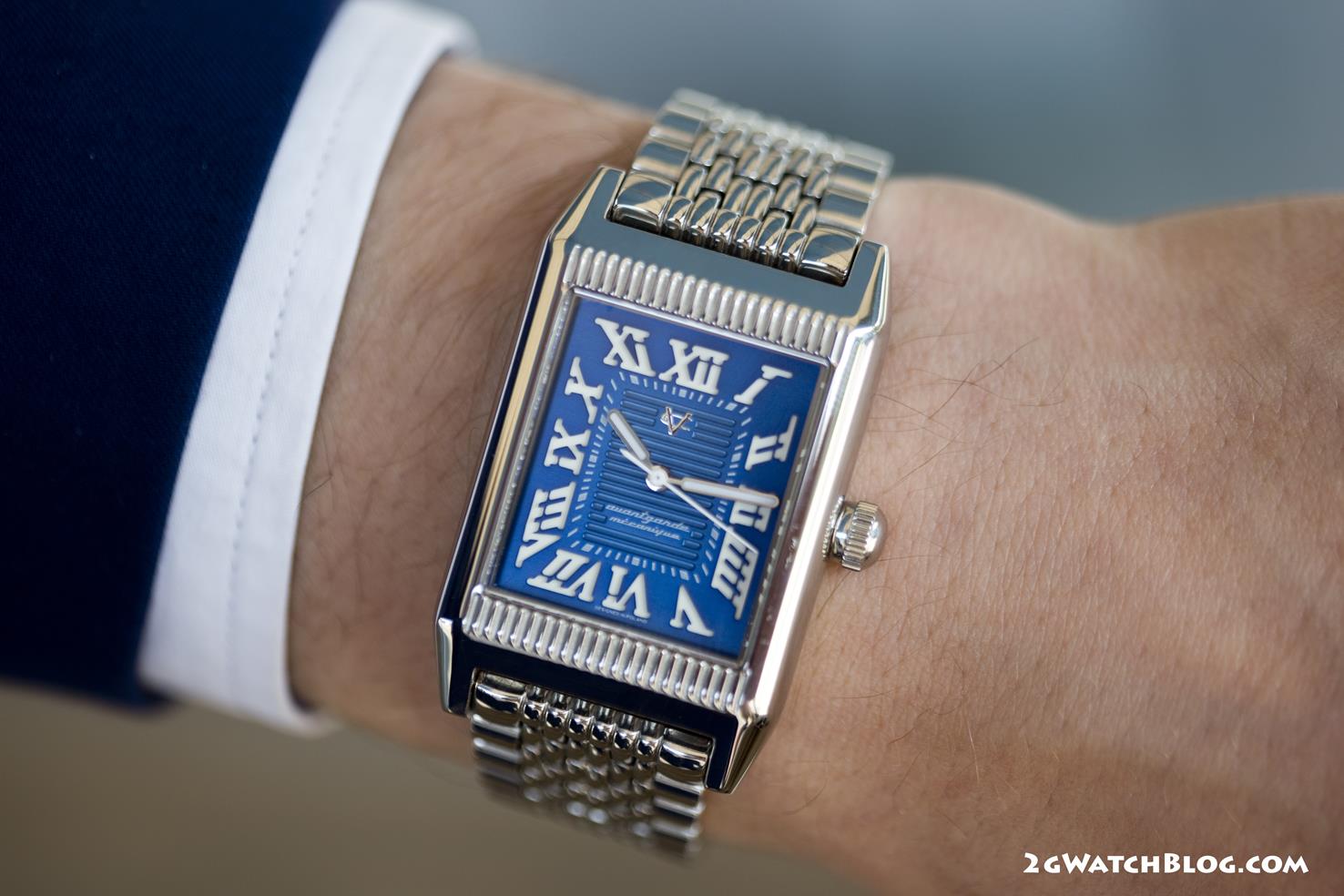 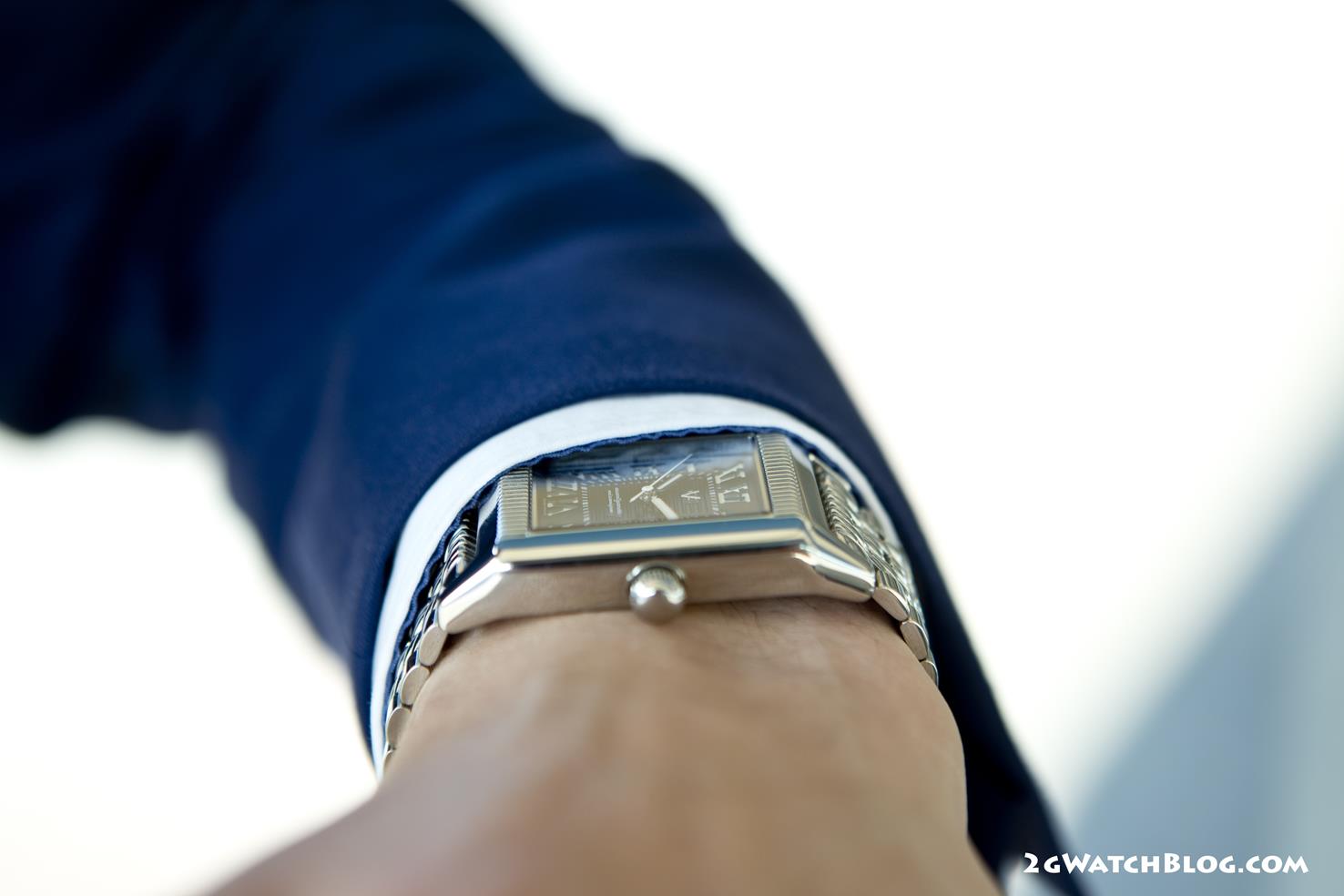 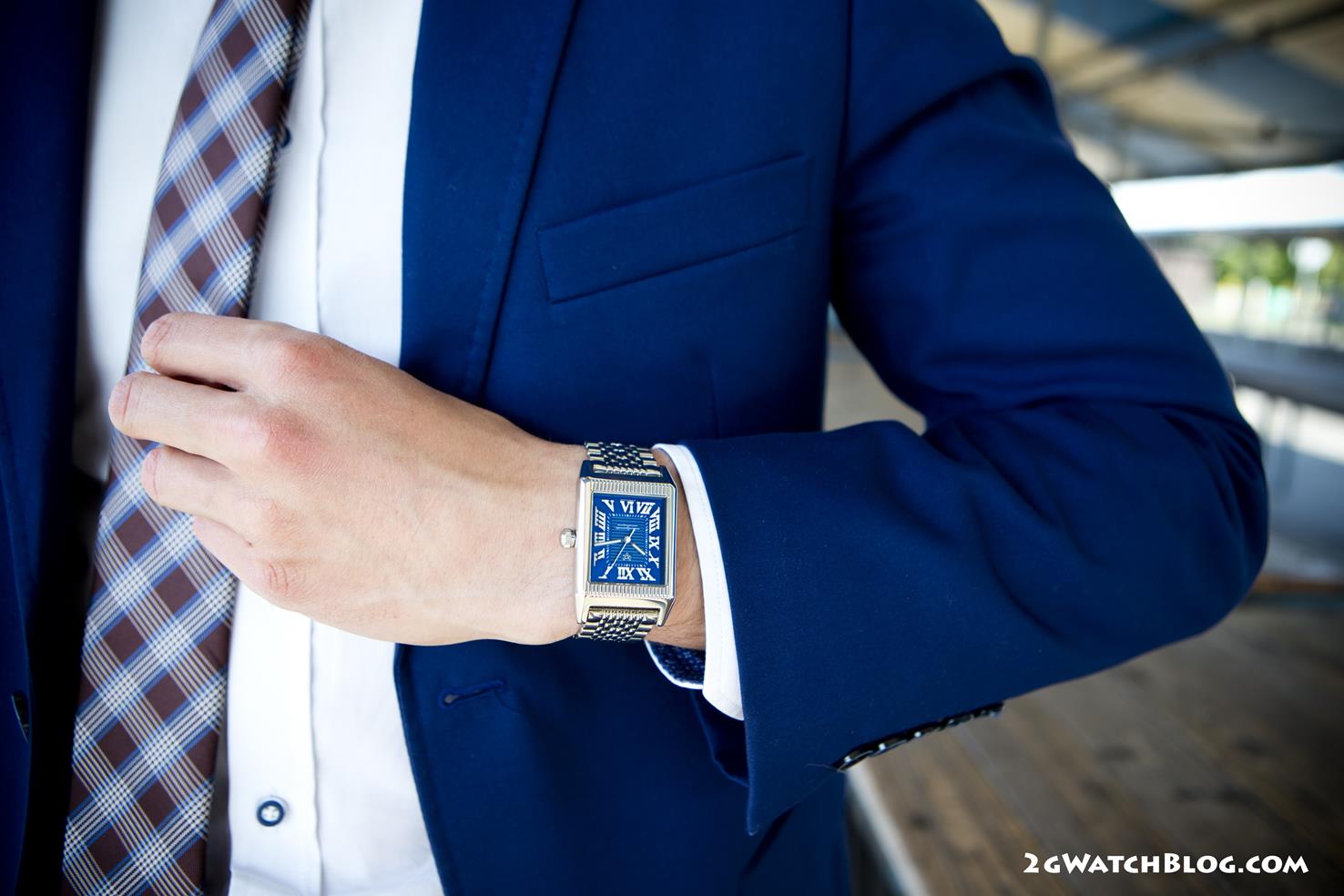 The case is completely polished, the front part on the width of the glass is flattened both from the top and the part with the lugs, the sides are rounded. Because the case is all polished, it will probably quickly catch scratches, I have been carrying my copy quite often for about 4 weeks and there are several of them. Fortunately, due to the rounded sides of the case, these scratches can be seen only after a proper cleaning of the case with a cloth and watching from different angles, so I think it will not be bad. The quality of the polishing is very good and there is no place to niggle.
Looking at the watch from the top – above and below the glass, the case has vertical cutters that give the whole baroque character, that it would not be too harsh and fit the dial also in this style. 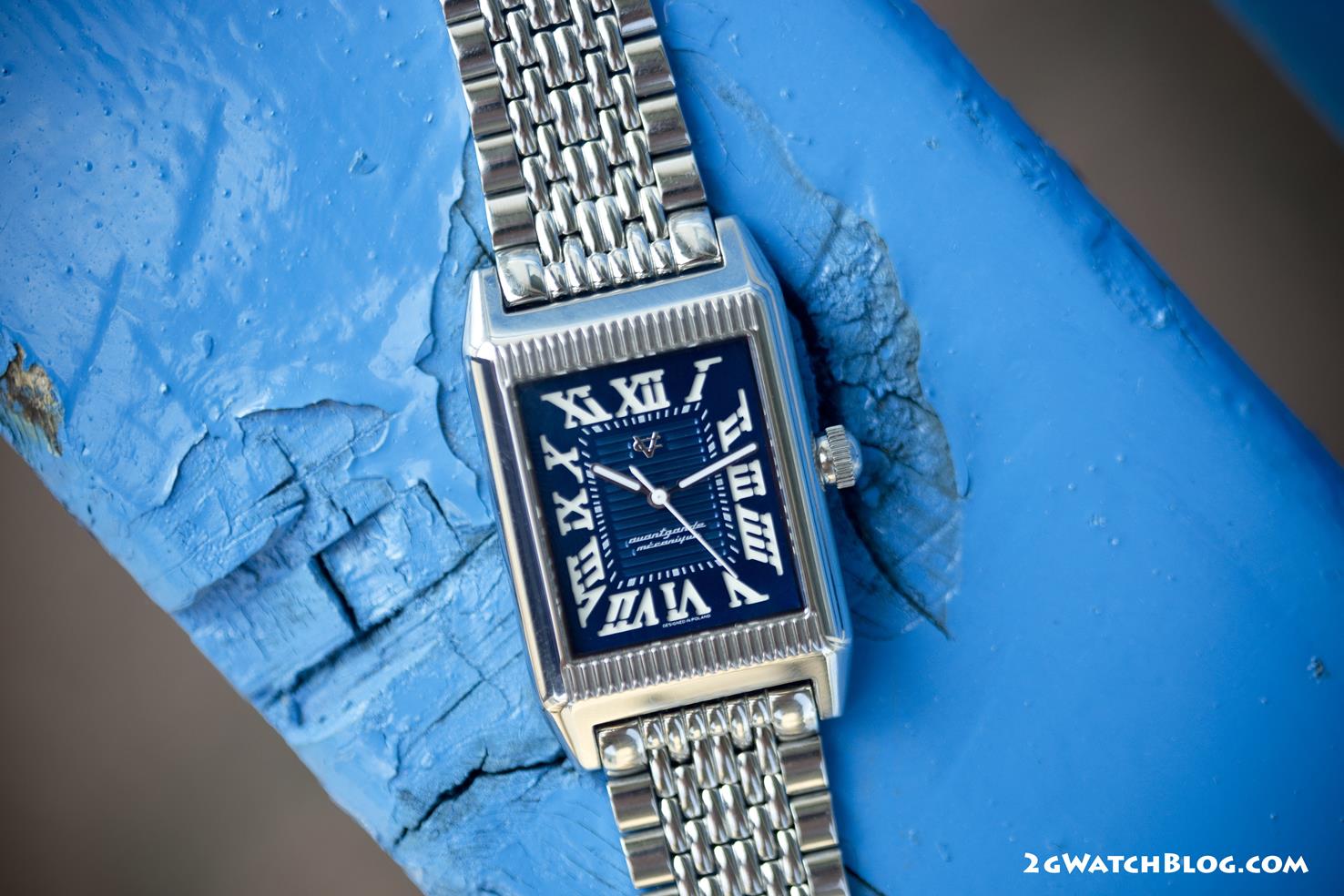 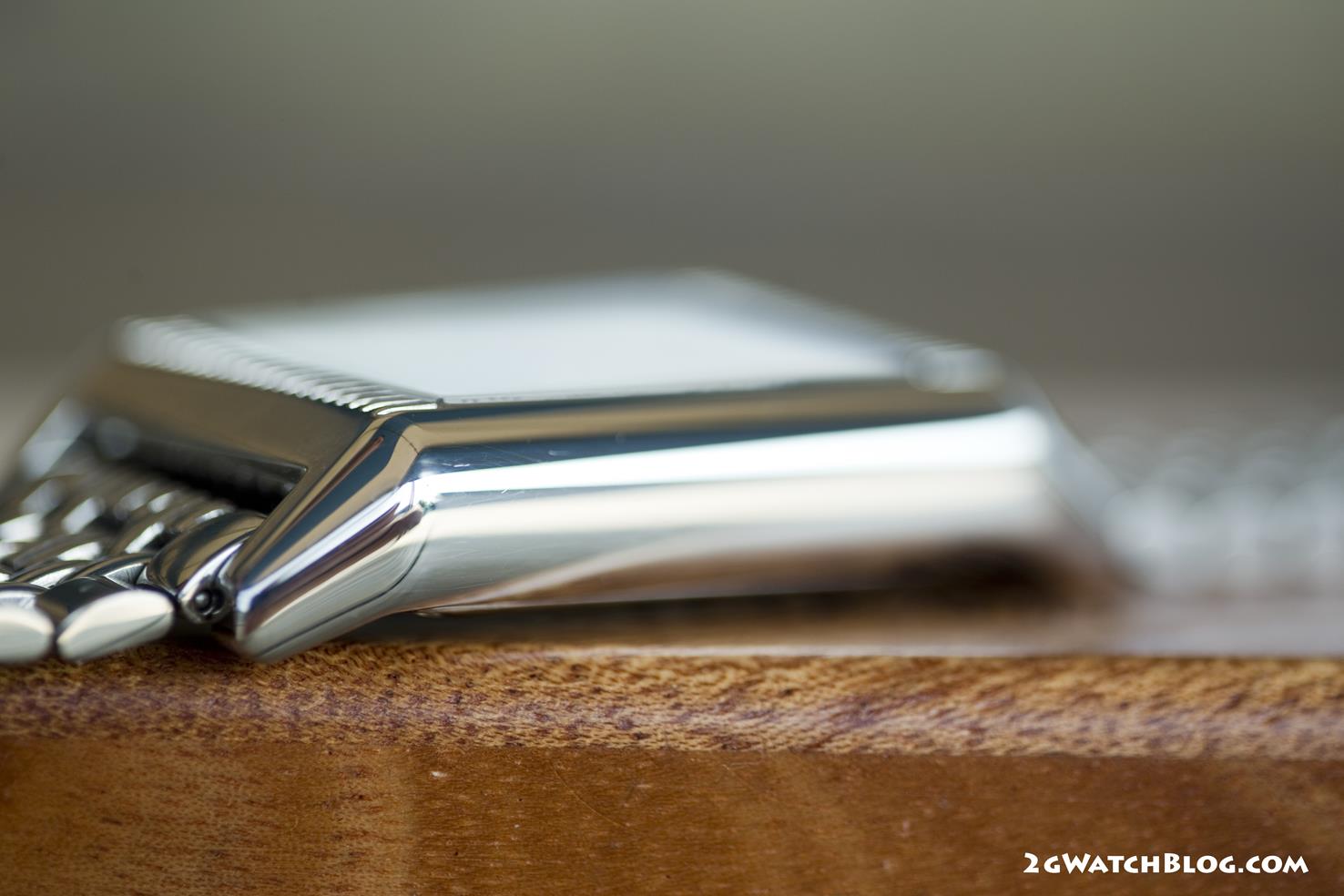 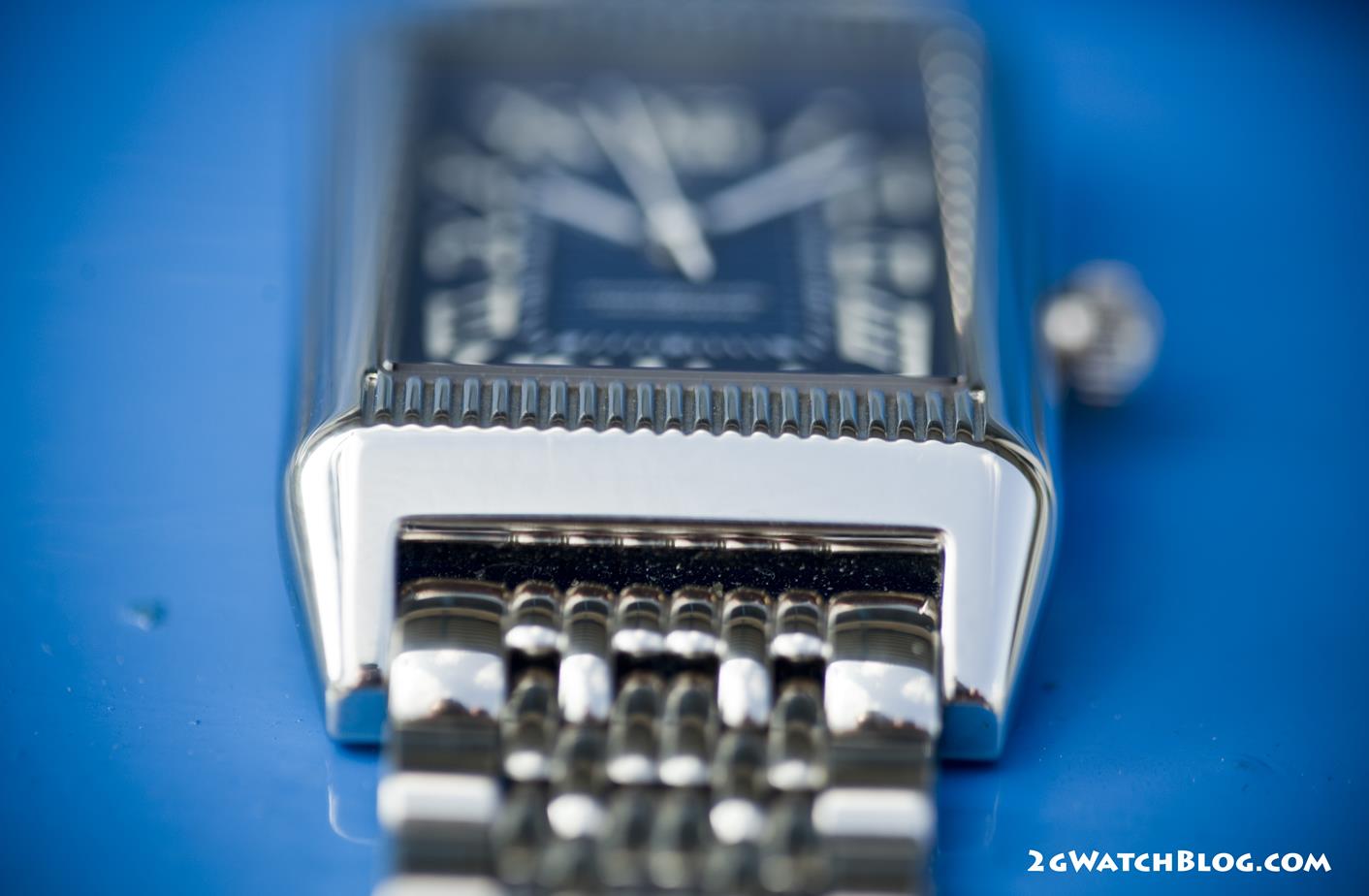 What I noticed when changing strap to bracelet is an uneven surface on the inside of the lugs – you can see there the effects of cutting steel, the case in this place has not been polished in any way. It does not bother me, but for people looking for perfect watches (not this budget) it could loom large 😉
The small, protruding crown fits well with the entire case, both in shape and cuts, making it easier to handle it. Crown is not signed – and good, because it would not fit the whole project. Looking from the side of the case you can see that the crwon was placed much lower than the center of the case, I also had the impression that it is not perfectly in the middle of the size of lug to lug, but measured the distance and everything is correct, so it is only an optical illusion caused by the way the case reflects light. 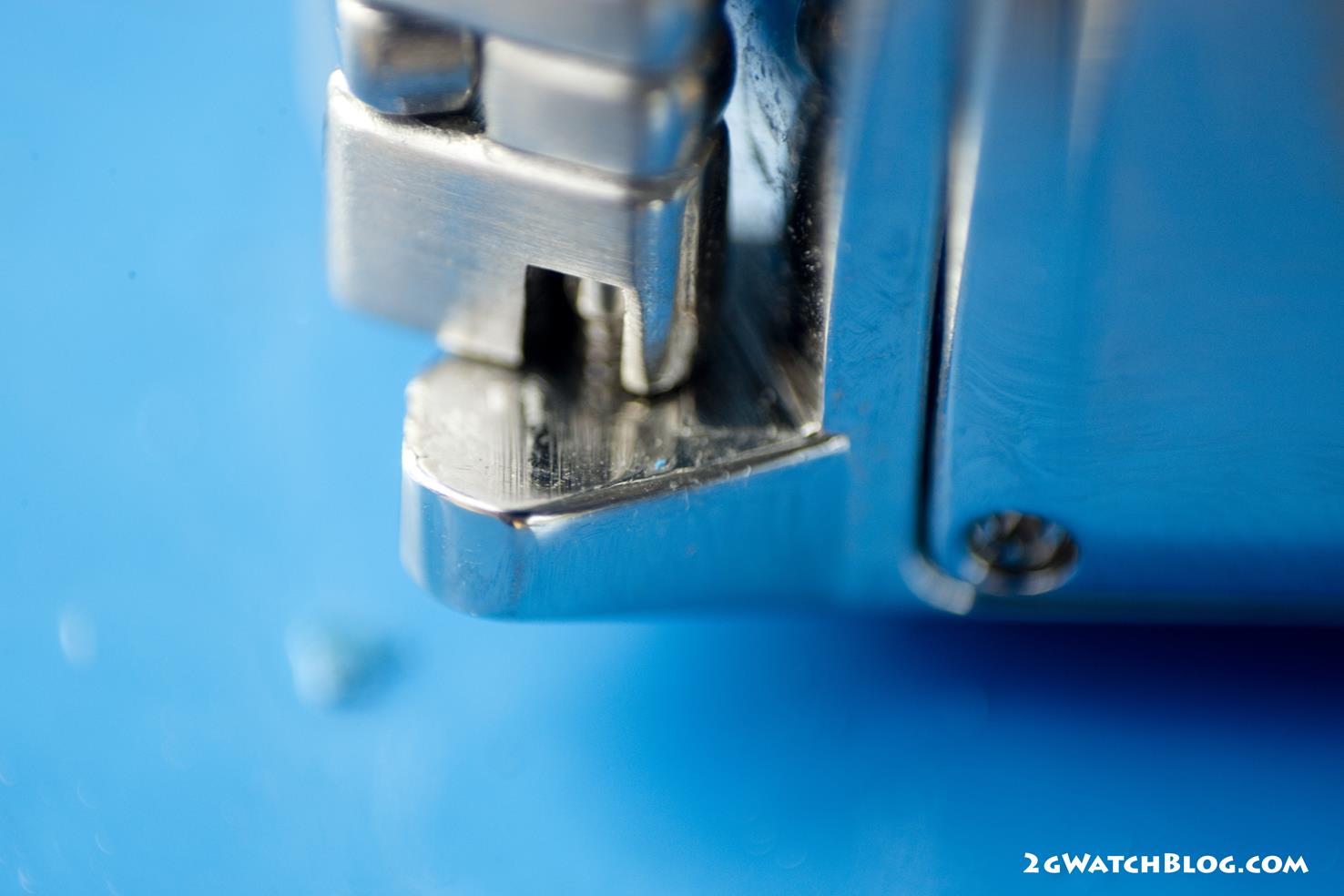 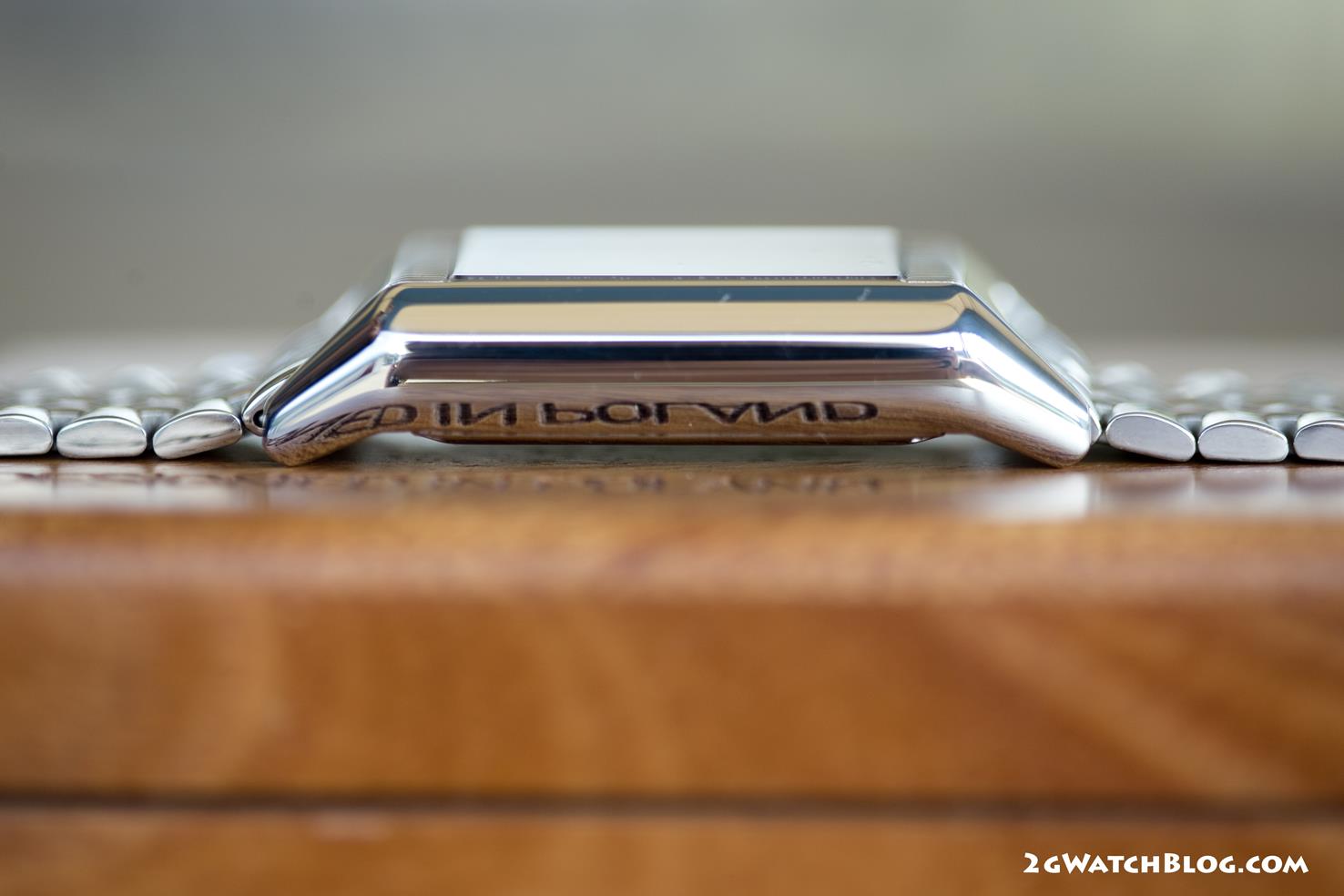 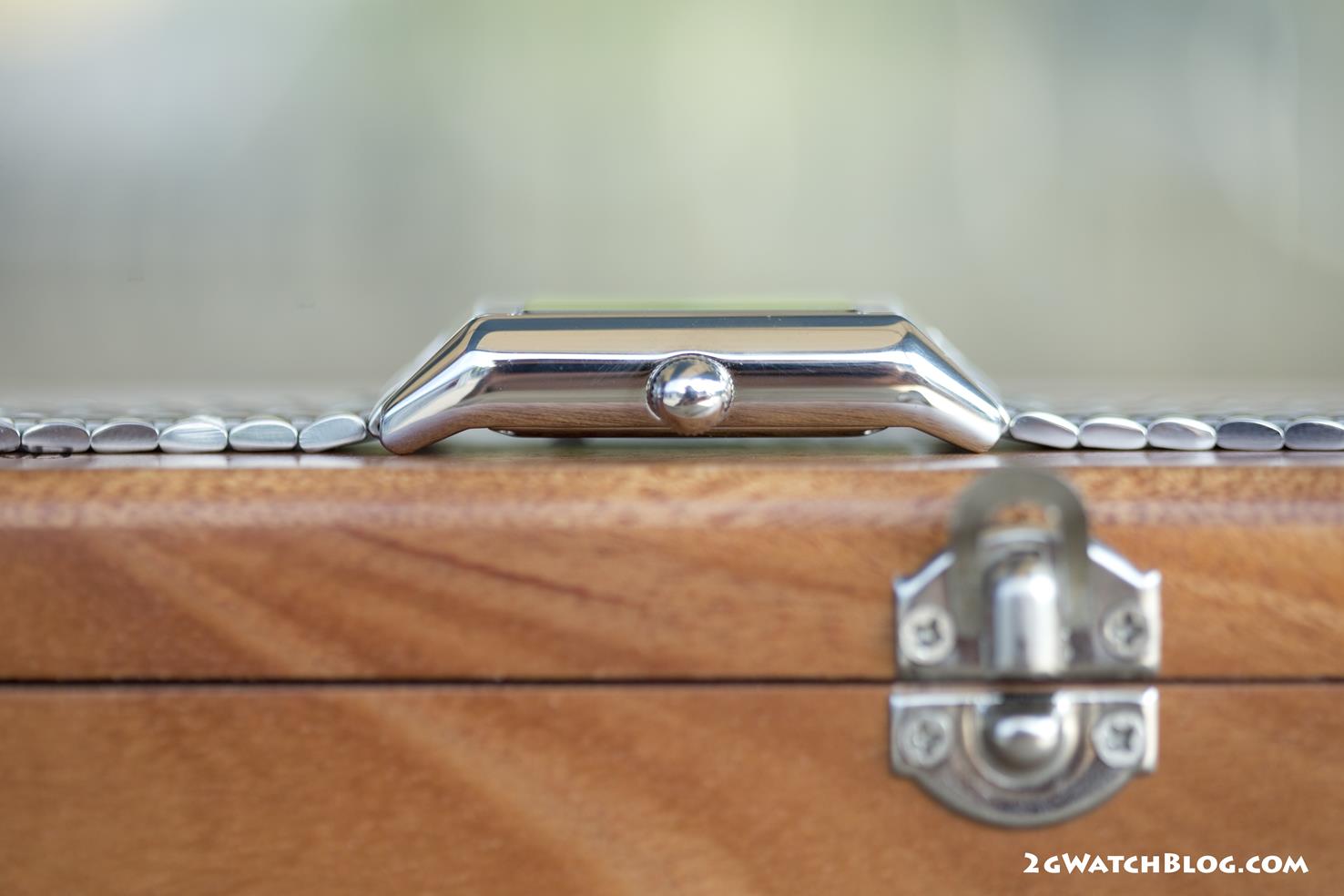 Japanese Miyota 6T33 is a movement with hand winding adapted to mount in smaller cases (it is small and relatively thin). Movement working on 17 jevels, in the frequency of 28 800 beats per hour, it’s skeletonized and gold-plated – it does not look very impressive and at first I associated with the movement mounted in the cheapest, Chinese skeleton watches (due to color), but after prolonged contact I liked it with the watch and sometimes look at it from the bottom to see how small gears work inside. The mechanism has a 50-hour power reserve and works very quietly. Winding it takes place with very slight resistance and is voiceless, which in the beginning may surprise a bit, because it gives the impression that the movement was broken. My copy is equal to +20 seconds a day, which I think is a decent result. 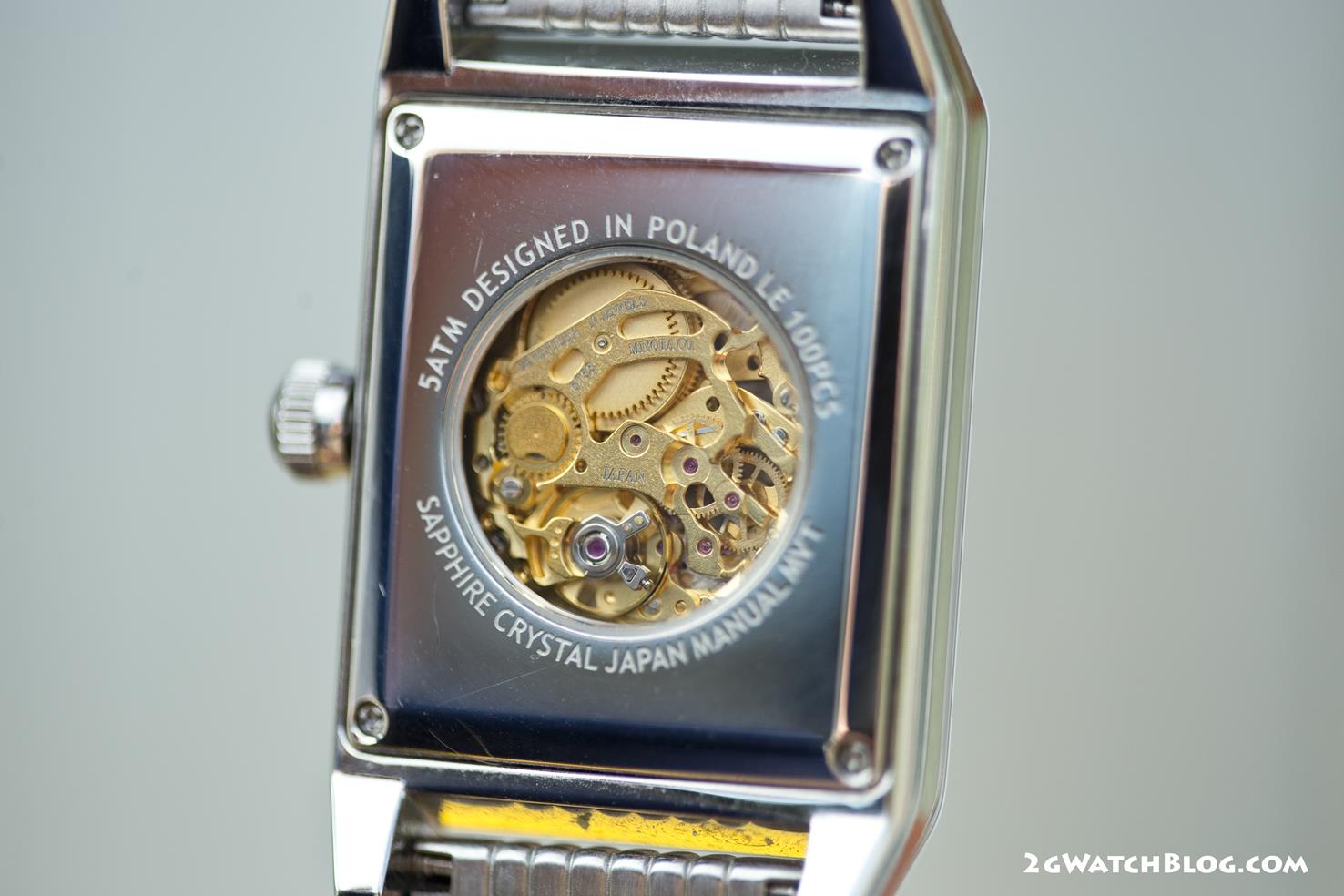 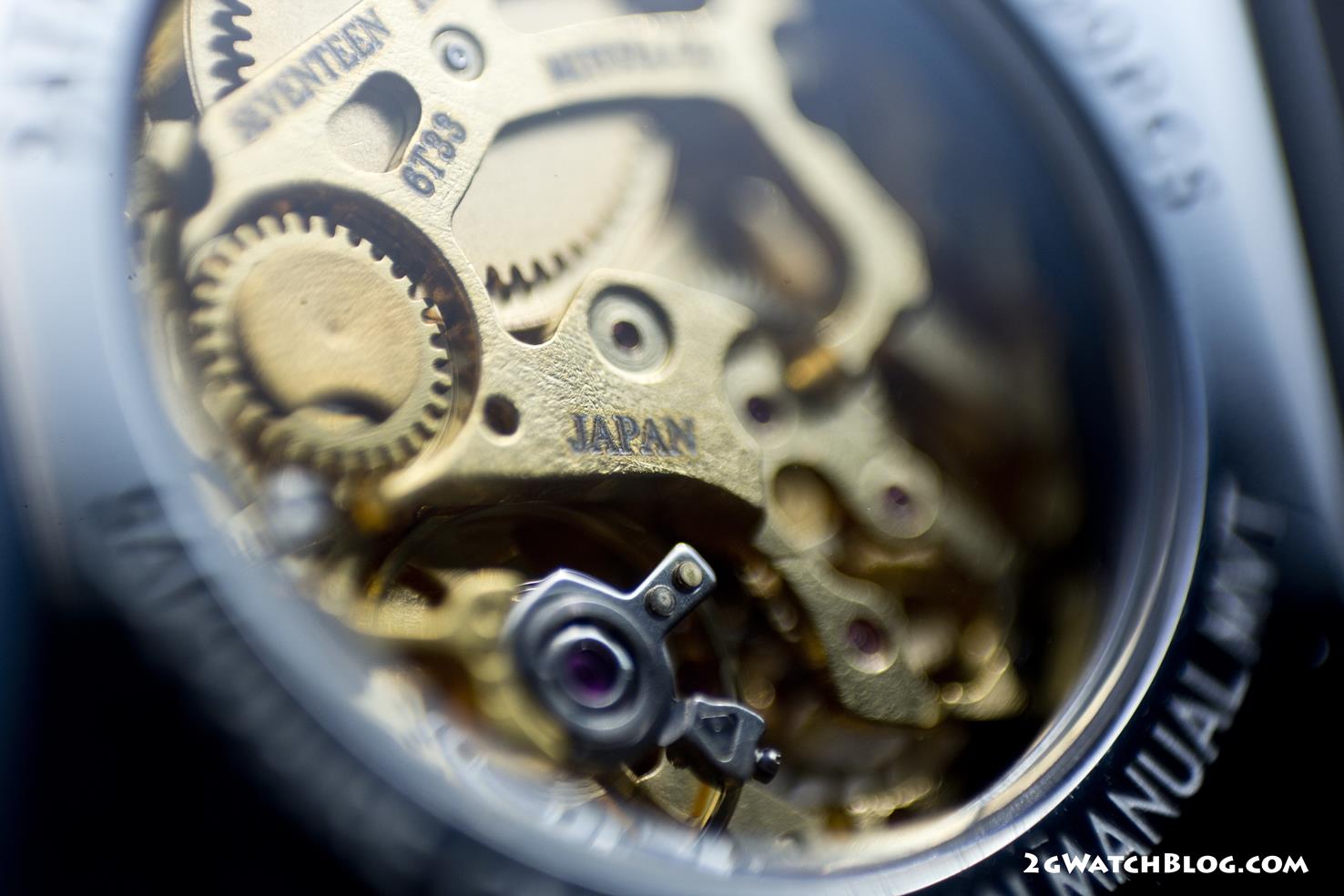 I bought Vratislava only when the first wrist pictures on the internet appeared. What convinced me was the dial and the fact that I had an idea on what this watch would look good (bracelet). In the past I didn’t pay attention to the dials of sandwich type, only the most convex indices were counted … my tastes changed a bit and the 2 watches that I wear most often have such a dial, what interesting both watches are Vratislavia (Vis 1935 and just avantgarde mecanique ). The dial has a blue color and is divided into two parts – middle with recesses in horizontal stripes and outer, smooth with indexes in the form of holes through which you can see the second, white layer of the dial. Closer to the inner part of the dial is a scale with minute indices. The dial beautifully shimmers in the sun, not like sunburst dials – otherwise, in its own unique way. 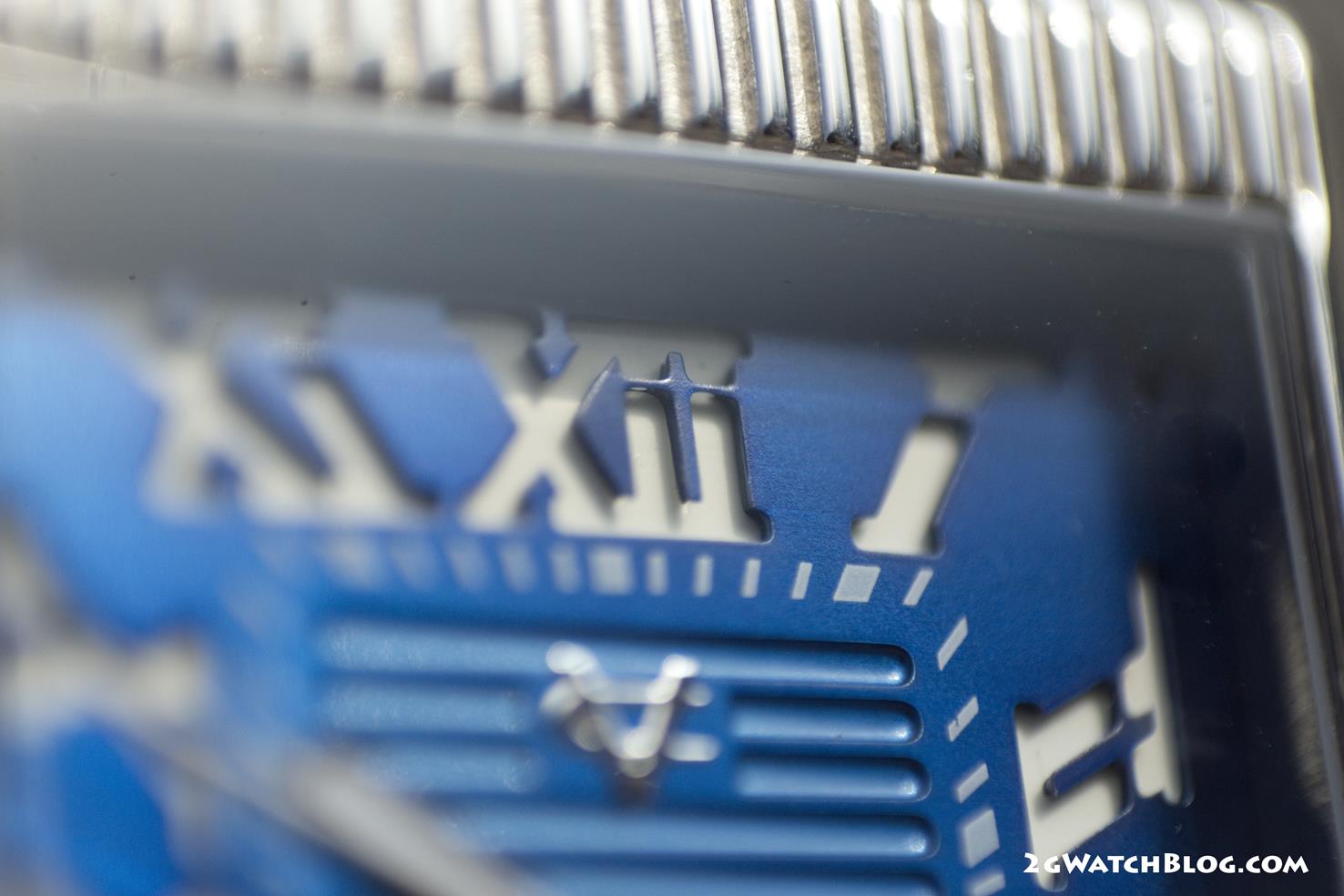 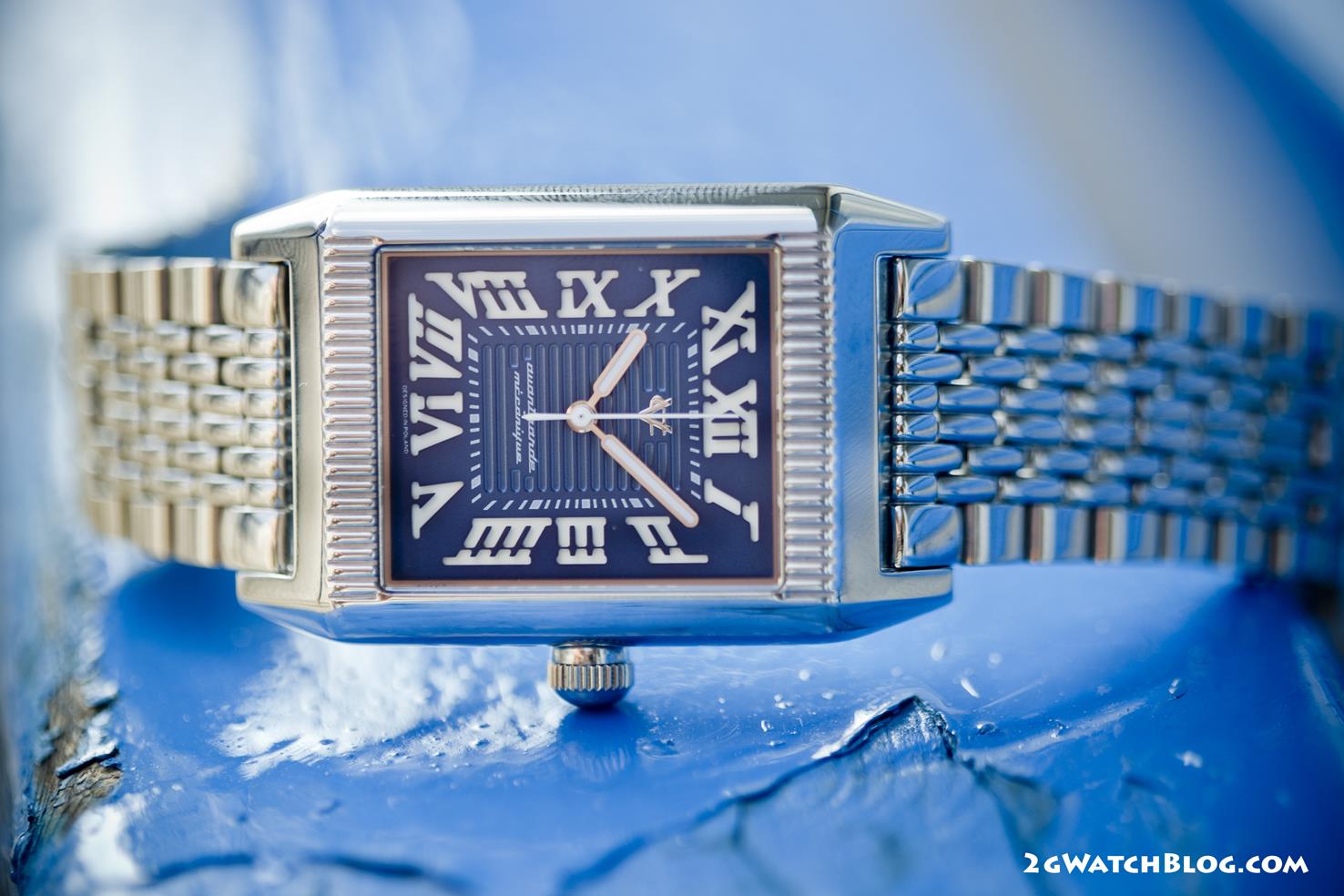 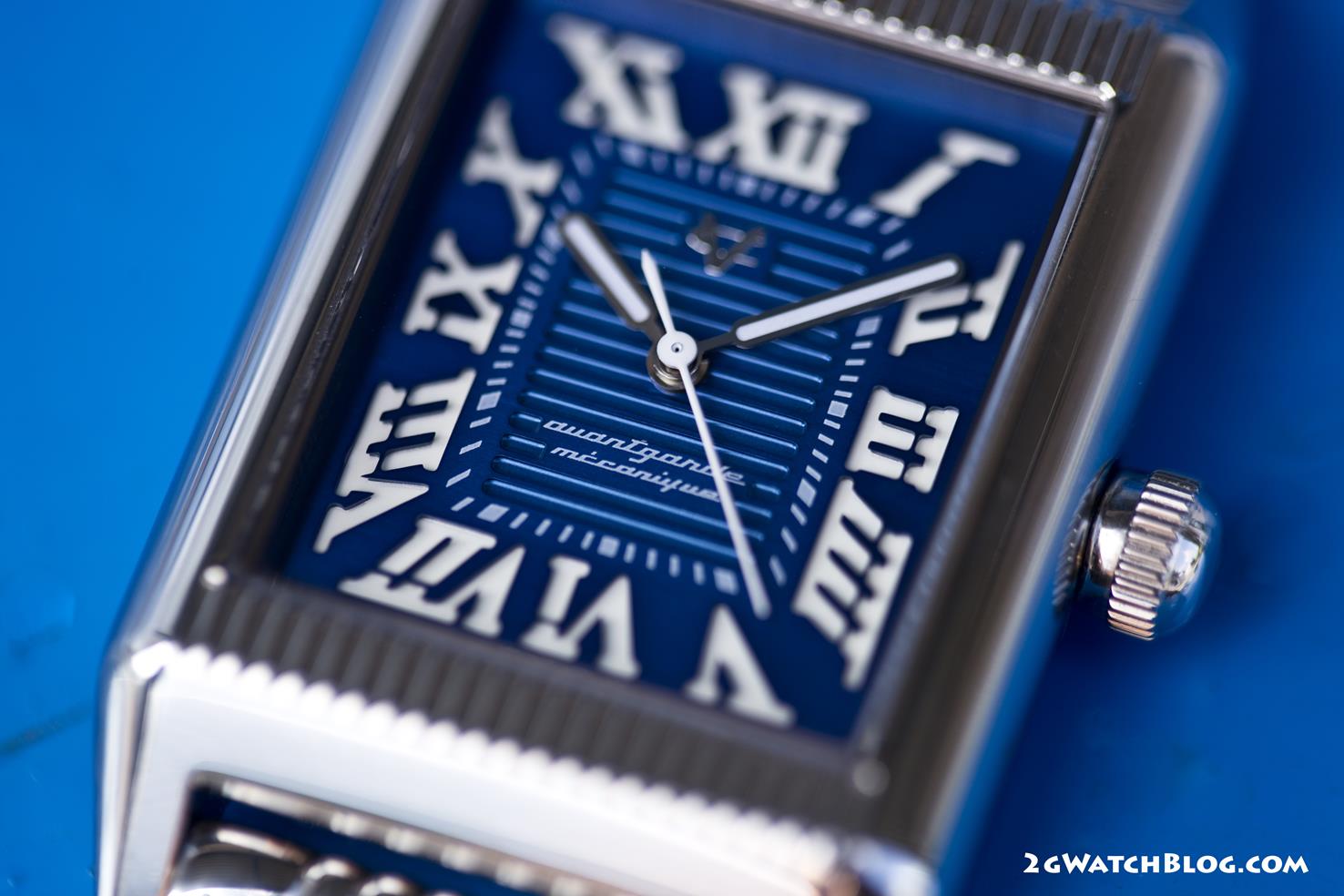 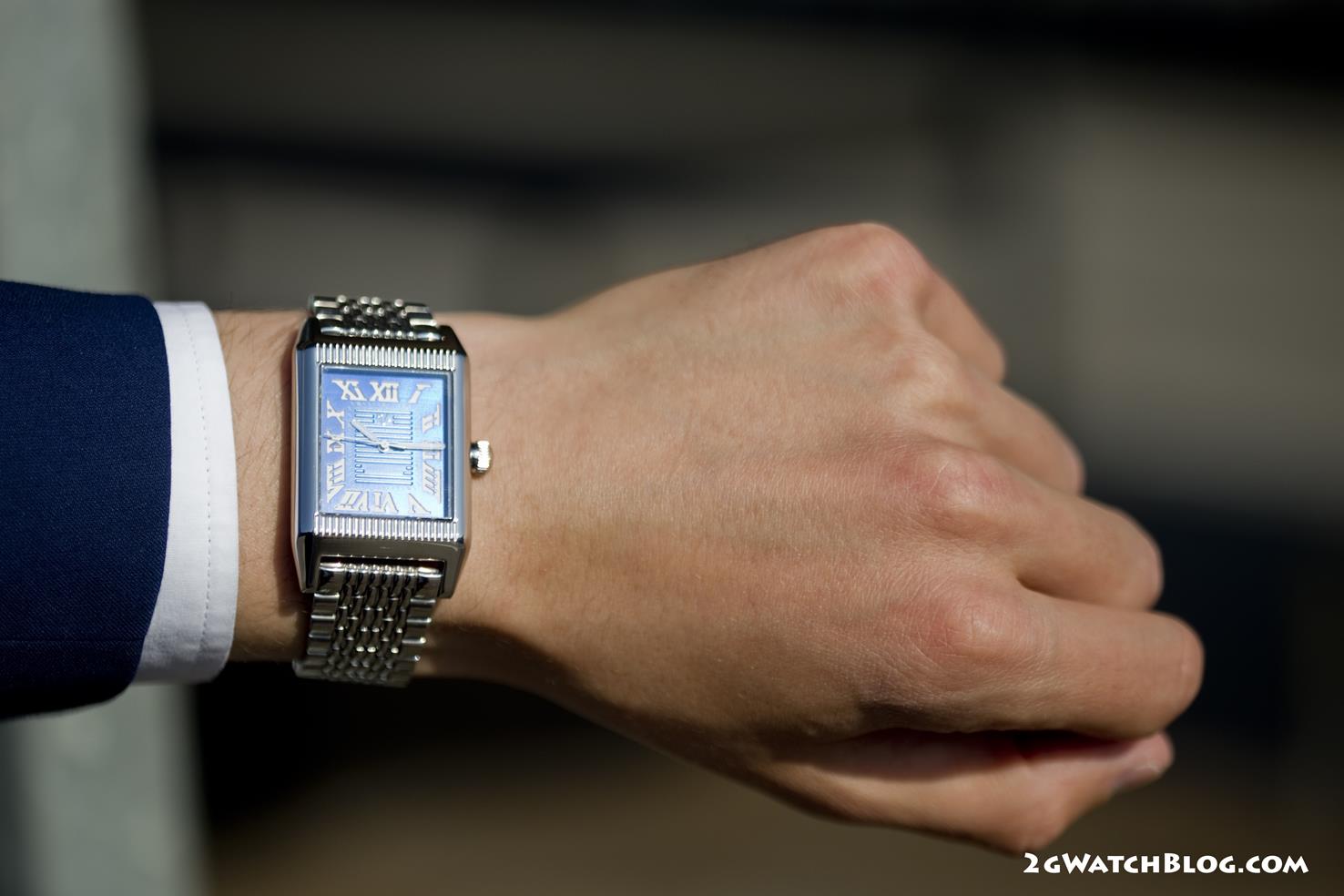 Hands are very classic, minute and hour are silver, and in the middle have a luminescent mass, while the second is white (without lume). The watch is generally readable, but it is not possible to indicate the exact hour by just one brief look at it. Due to the shape of the dial, the indices have different distances between themselves and in addition are so small and in some places so close to each other, that very often the hand covers two minute indeces at once. It does not bother me, because as they say “something for something” – we want a square dial? We have not regular indices. 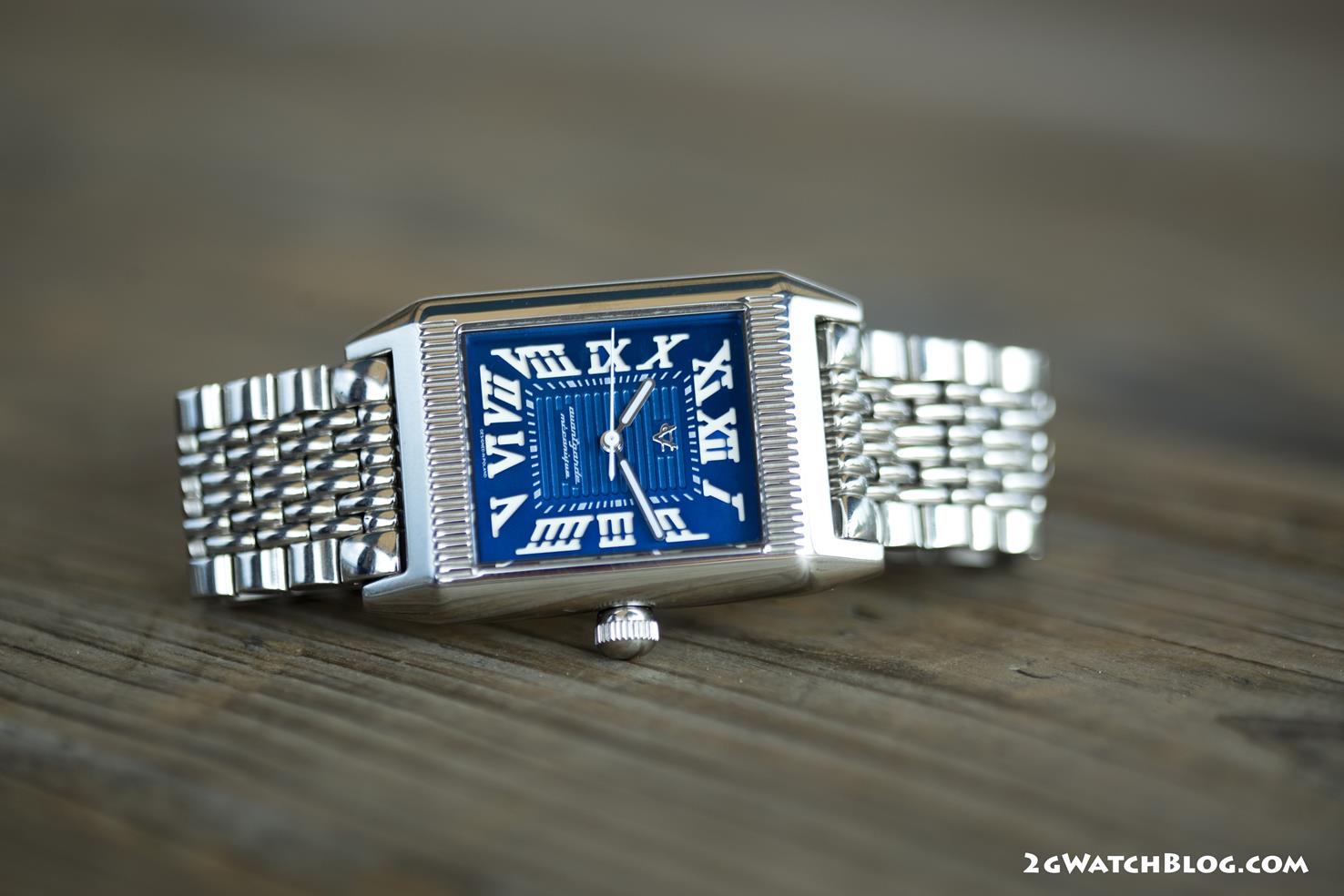 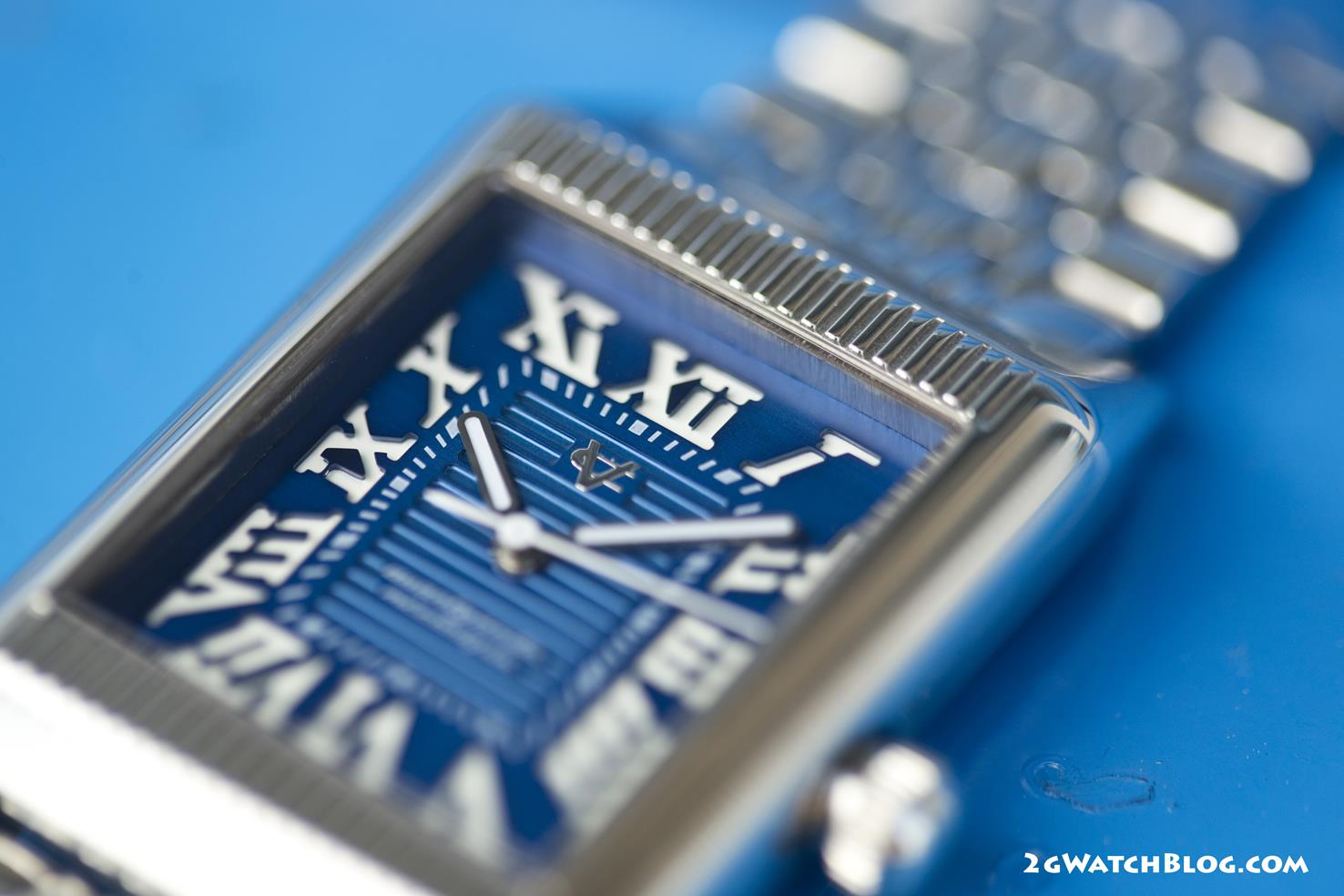 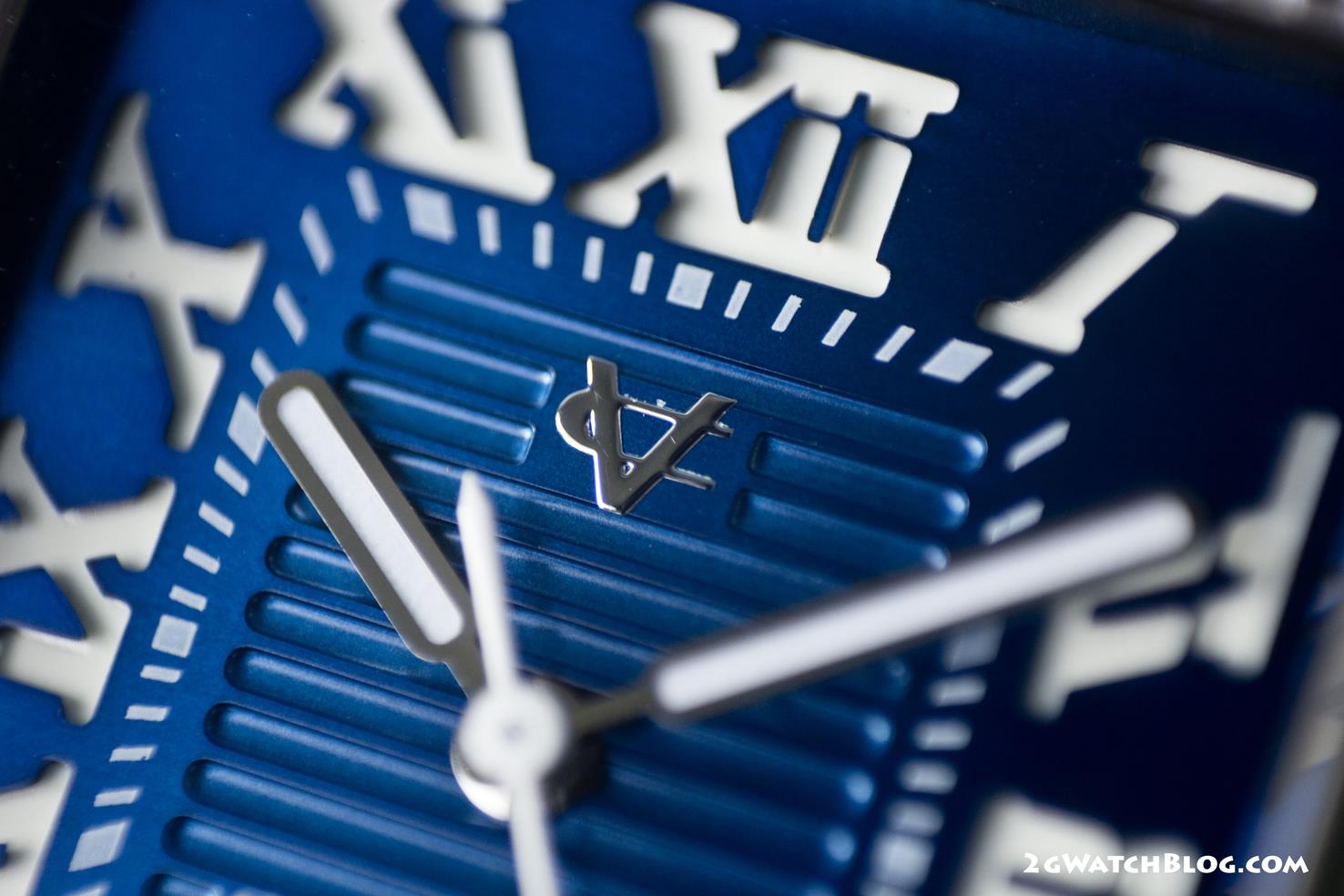 Lume shines nicely and brightly, but only for a short time after the light disappears. This is a regularity that repeats itself in Vratislavia watches all the time – watches with a sandwich type dials have a much worse lume than those with applied indices. 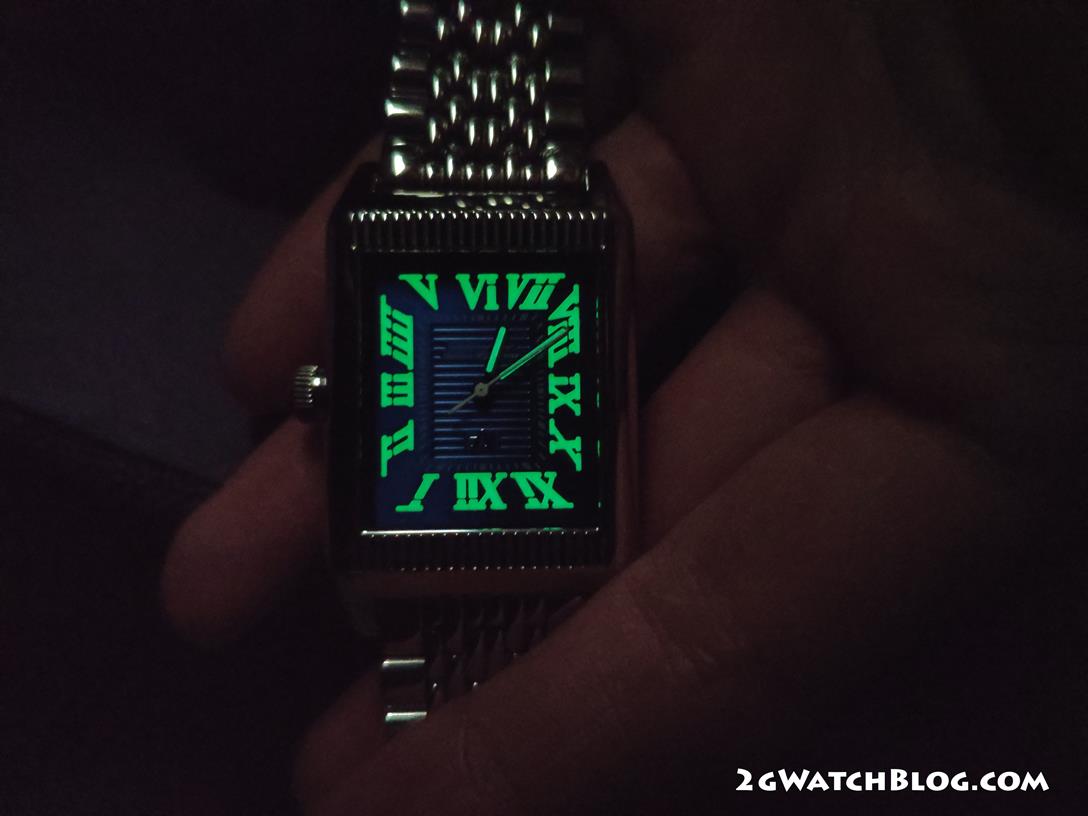 The case back is flat, partially see thru, with a small movement inside. The case back is attached to the case with 4 screws – 1 in each of the corners. A standard information about the watch appears around the round glass. 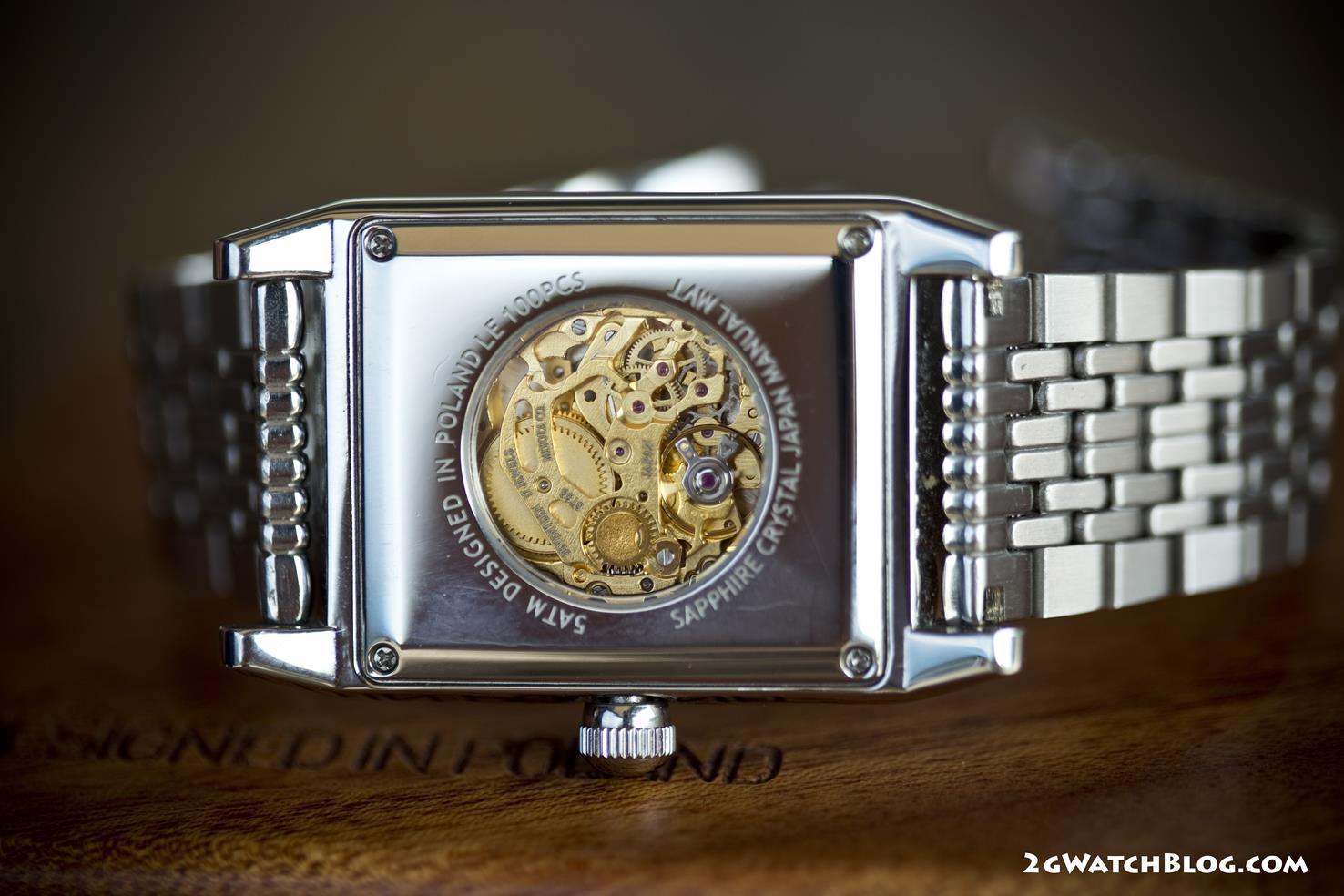 Yes, this is the weakest element of this watch … I will start with the fact that in my opinion the black leather croco strap doesn’t fit this model at all, much more I liked the earlier idea that the watch was delivered on a strap made of canvas material. In addition, the strap itself is of medium quality, it is stiff and visually also does not knock down, fortunately the strap in the case of watches is the least worry because you can always change it to another or like me, to buy a bracelet : D 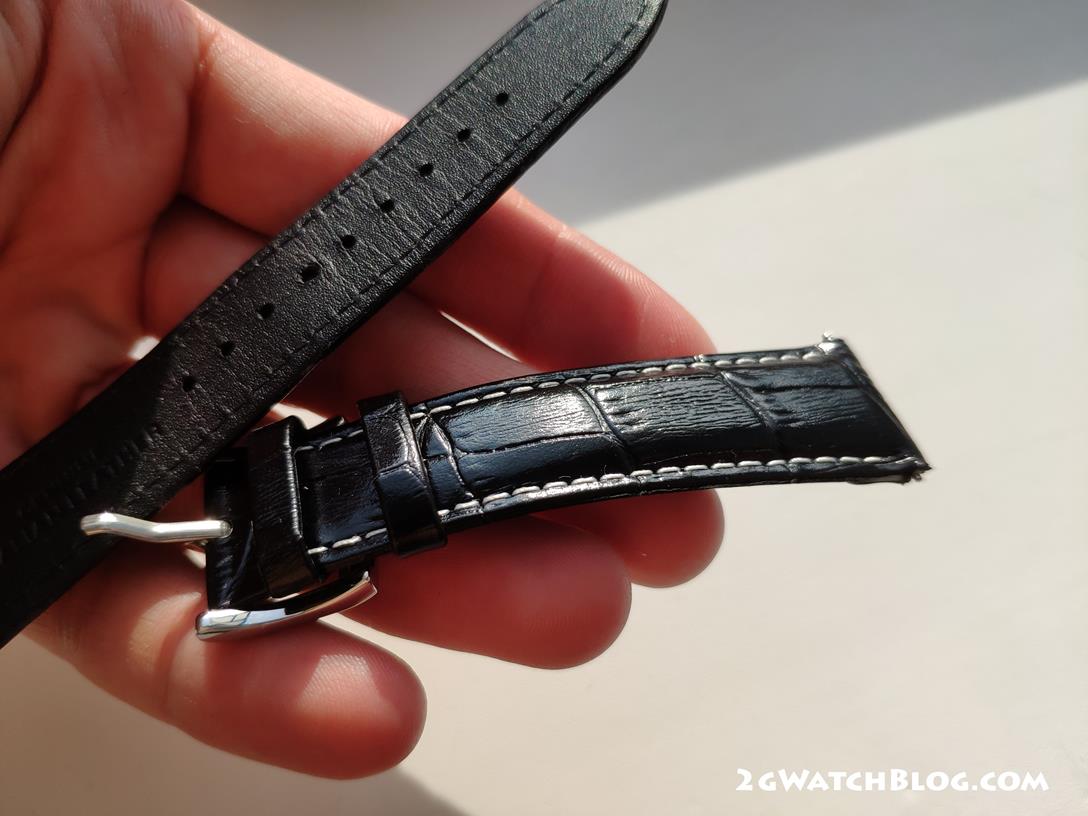 The search itself was not easy because the width of the case between the ears is 21mm, so taking into account the shape and overall design of the watch, this narrowed the possibilities of choice. Fortunately, I found the right bracelet, which in my opinion was a shot in 10 and in addition I did not have to pay for it (it cost PLN 50). The watch looks great on it, and the bracelet itself is of good quality. 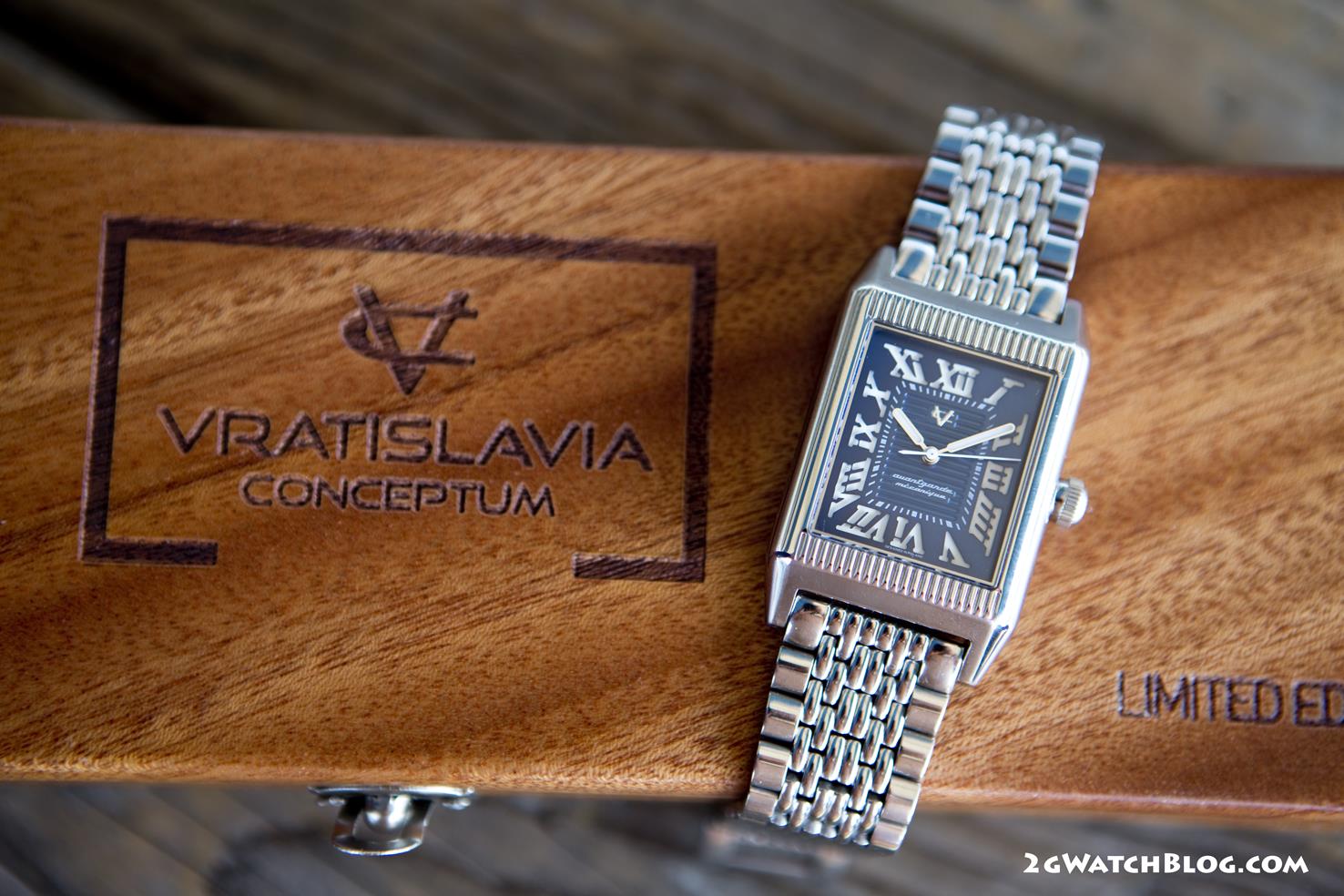 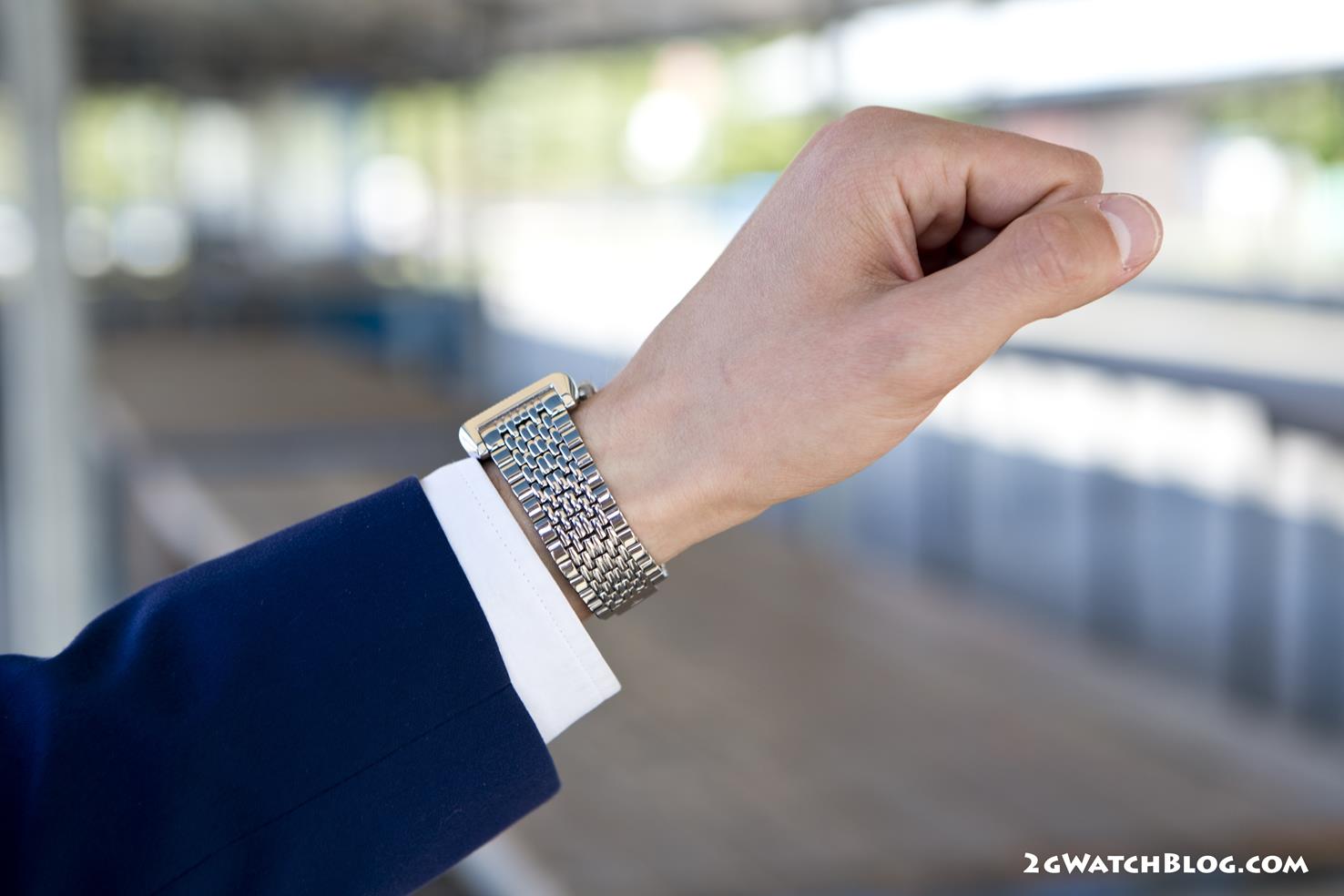 I will not be delighted and praised to heavens, because there is nothing to … it’s just a decently made watch for decent money. I really like the design and the idea that Marcin had for this timer, and it is the only watch with a rectangular case I have ever liked.
And one thing I have to give back – in conjunction with this bracelet it’s the most comfortable watch I’ve had and probably the most comfortable watch I will ever have, and I absolutely do not exaggerate or joke about it here. This is an ideal for me when it comes to wearing comfort, due to the shape of the case it’s arranged differently on the wrist than round watches. I don’t want to get it off after returning home. Even my watches, which I wear on NATO belts are not so comfortable, I just don’t feel this Vratislavia on my hand and considering the fact that I wear the watch for work longer than others in the day, it is very important to me.

I certainly do not regret the purchase and I would buy it again, I still think about to buy a sport version, which I also think is interesting (even more interesting than blue), but I would not have to wear it because it would not fit into everyday clothing, and to the suit, the black version is already too sporty. It is also the second watch of Vratislavia, which I plan to leave “forever” 😊 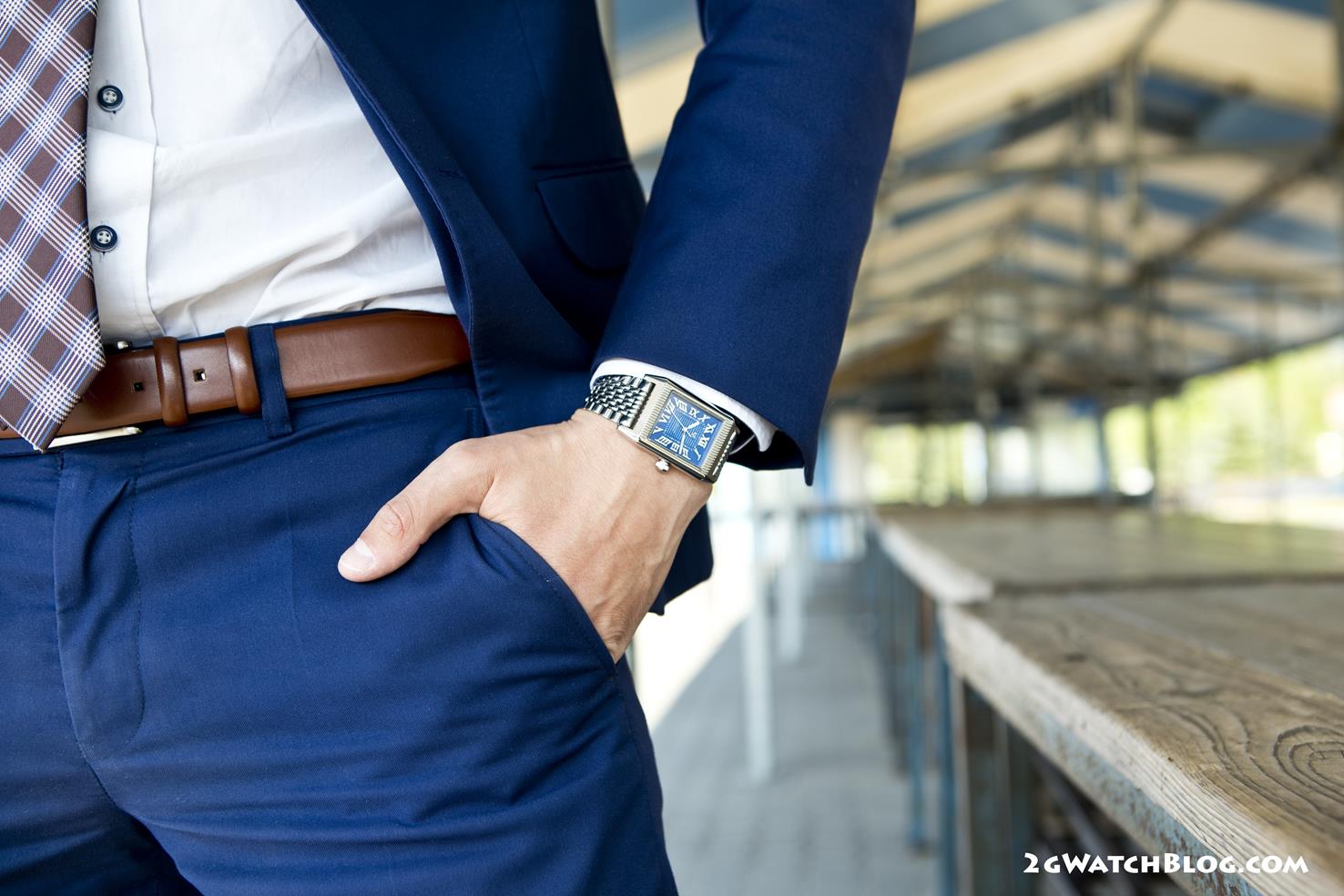