How it was? Three times lucky? Well, there was a moment when i had to face this model. I bought it for the first time 2 years ago from my friend. I was delighted with the quality of performance in every respect, as well as its versatility. I decided that it would live in my watch winder for a very long time.
Soon my and Konrad’s roads crossed. The first session of his Tourby and a short visit to my home. He opens my watch winder and see more watches.
– Well, this X-Wind, Star Seeker is also cool, but I like his new version more. White Orient cube … Well, let me tell you that it’s even cool.
– Aaa! He has a life sentence for me. It was my first automatic watch.
– Bulova great!
– I know, I know – on Valjoux;)
– Obris … it’s an anvil!
– Konrad, it’s just a man’s watch!
– Oh! Seiko! Damn, its fat!
– What are you talking about?!
I looked at it from the side and in fact! Until then, I didn’t notice this somewhat overgrown, disproportionate height. I decided that, after all, the watch is not too thick, it is very versatile and I will not change my opinion. He stays for a long time!
However, the seed of uncertainty has been planted. With the next purchase plan, my long-term Presage will be sacrificed to fit the budget … 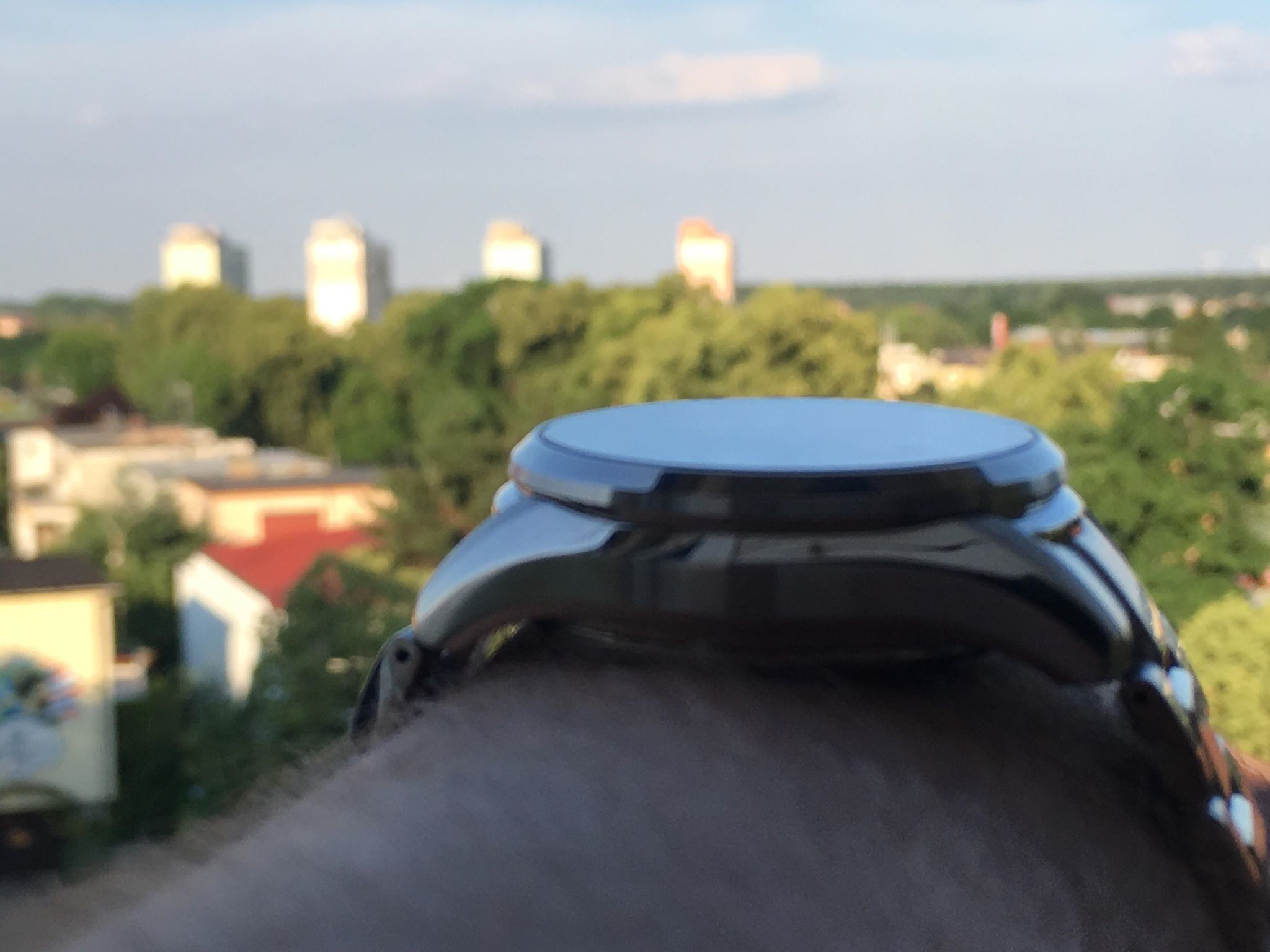 Cold somehow. Winter is, it must be cold! January 2019. Viewing offers on OLX ends with the purchase of the same model. Watch in a bad condition. I devote two hours to refresh its case. I’m on level 9/10 from 6/10. Its cool Seiko … Two days later, Hamilton catches my eye. I look towards Seiko and in my mind I tell myself, Seiko, sorry. I’ll come back for you one day.
And spring comes after winter …
There is nothing like selling a watch and waiting for an offer that will surprise you. I am looking for it, I am looking … Nothing, unfortunately nothing on forums, groups, advertising portals … Wait a minute! There is ! It’s my Seiko (another item)! I write to a friend and after a few days it’s on my wrist. Three times lucky!

After such adventures it would be stupid not to write a review about it. So I invite you to read the review of my watch coming back to me like a boomerang 😊

The case looks slender, thanks to the wide width of the lugs, which is 22mm.
The cuts were made using the Japanese – zaratsu method, which means that each element of the case was finished by hand. The sides of the case, where polishing and brushing are alternately applied are also impressive. The bezel from the top is also polished, but its bottom has been matted with brushing. A similar procedure was applied to the lugs of the case. On the side of this one, at three o’clock, we will find a marked crown with which we can hand wind the movement and set the date and time. 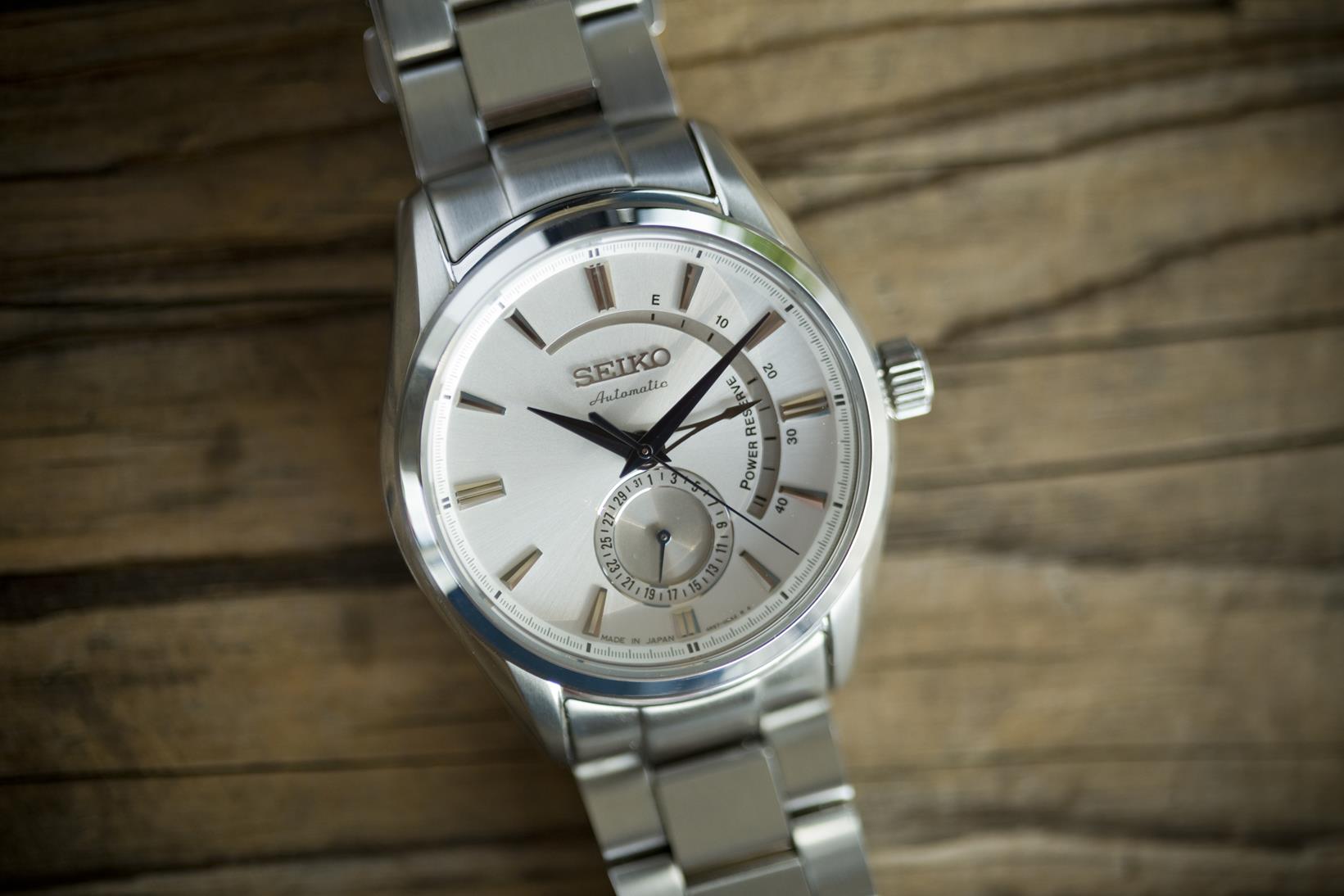 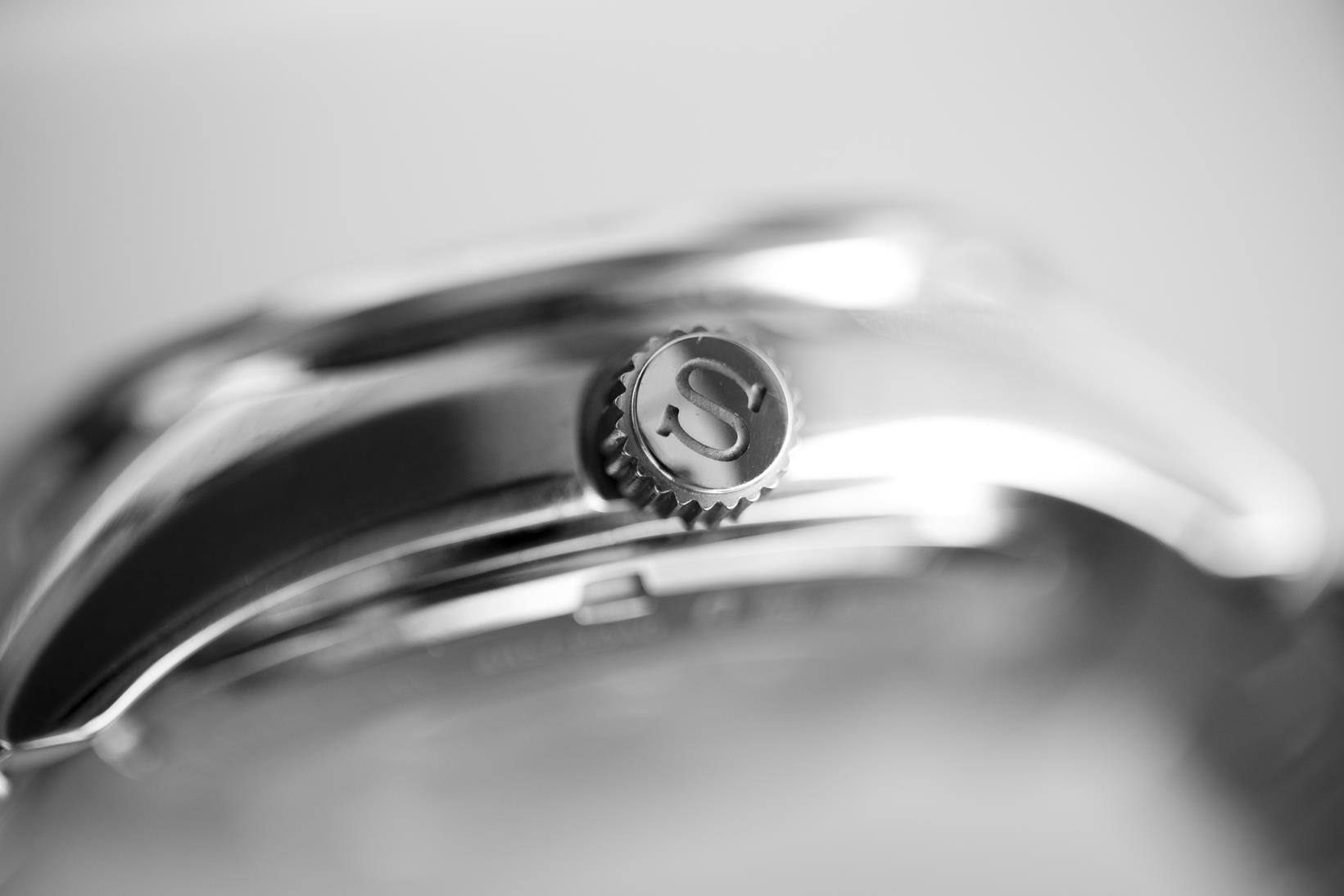 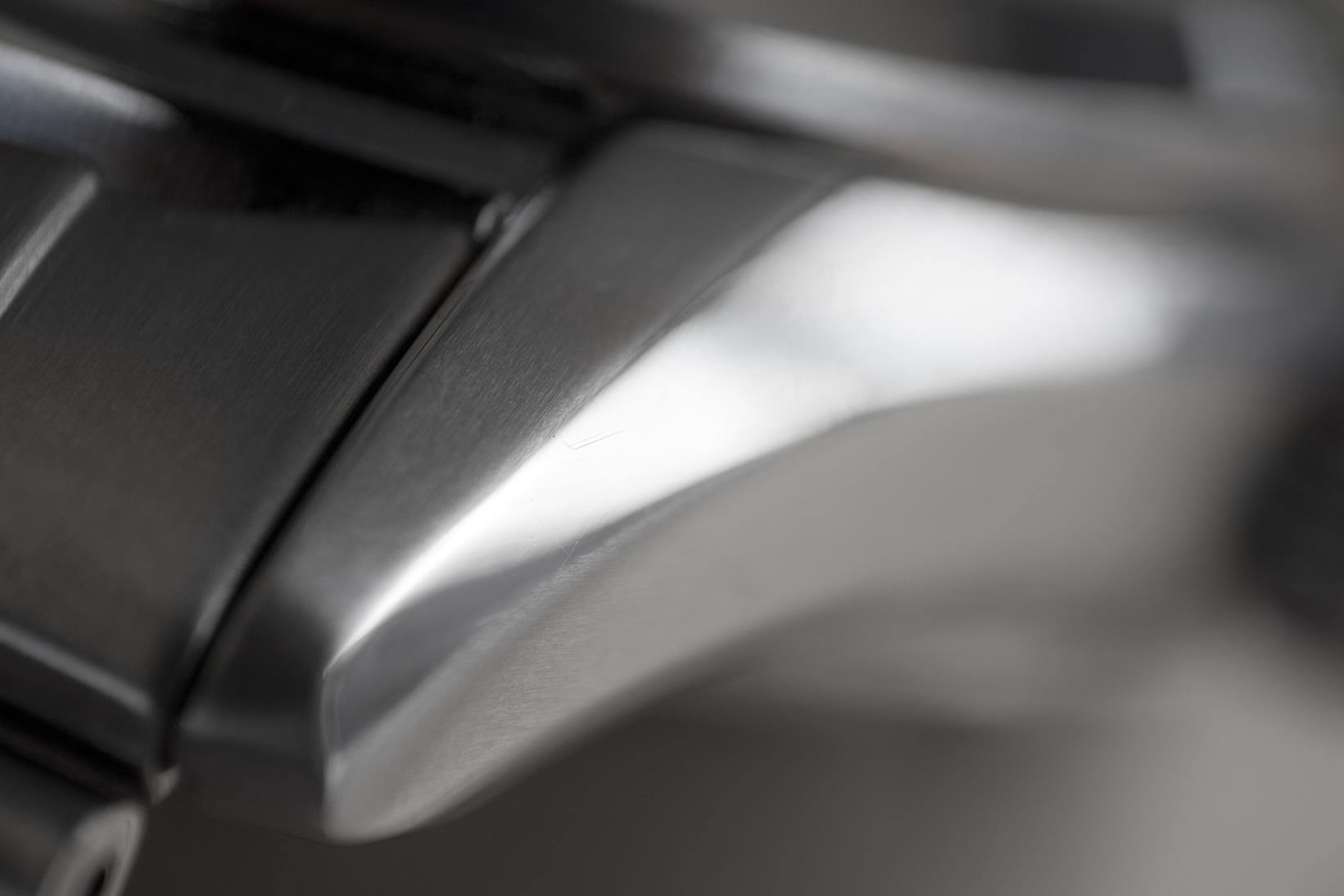 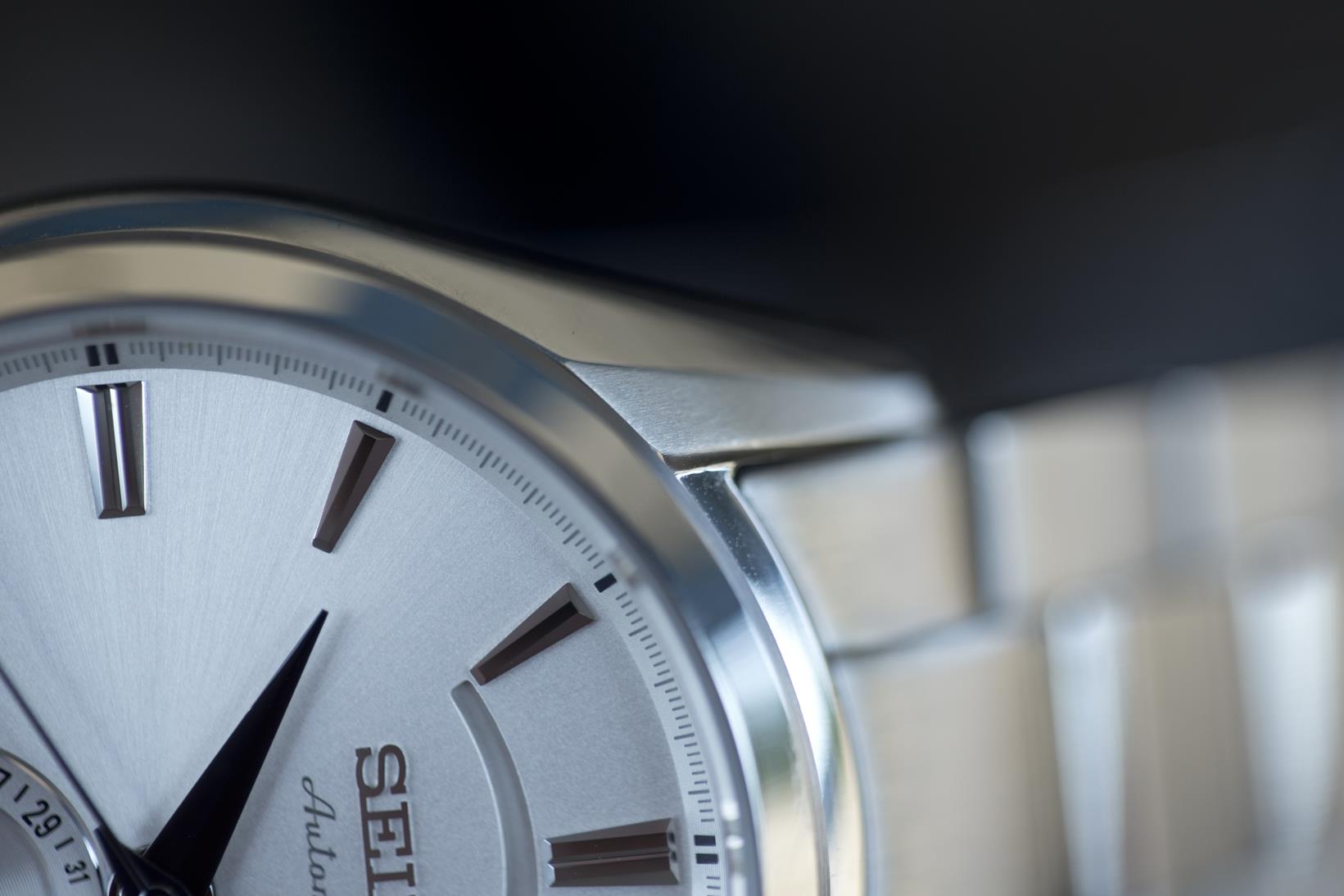 It’s time to look at the case from the side. In the introduction you read that Konrad was only aware of its thickness. Fourteen millimeters – because this is its thickness – makes an impression on paper. Live, on the wrist, you can’t see this number. The case is different if we take off the watch and take it in our hands. Then we will see an case worthy of a diver name , with a thick bottom and a high bezel. It will remind us of this thickness also the cuff of the shirt, which will stand out unnaturally, which is why in my opinion the watch is bad option for the suit. The case from the front side is closed with sapphire glass with an internal anti-reflective coating, and its bottom part is closed by see-thru described case back, which is screwed. 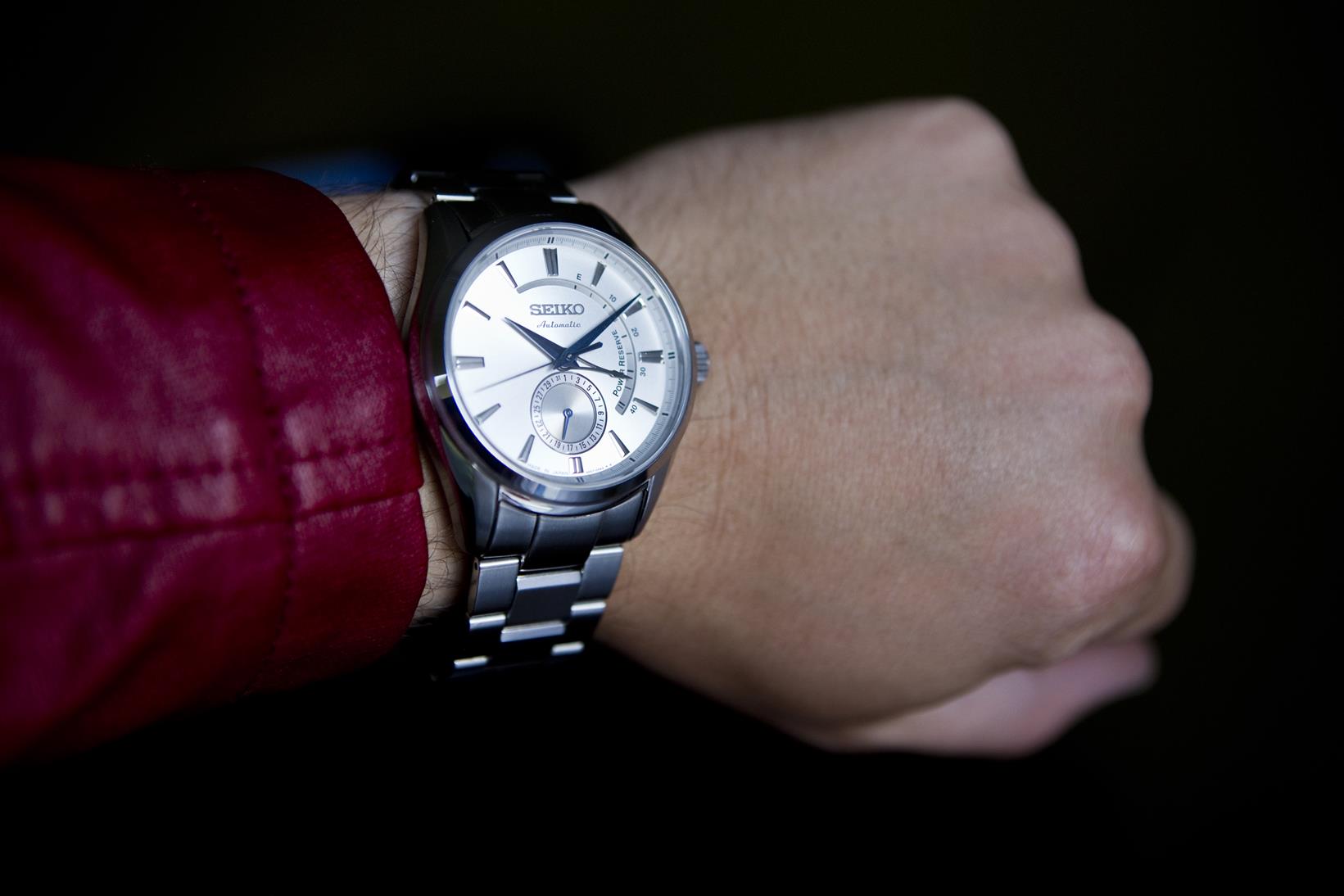 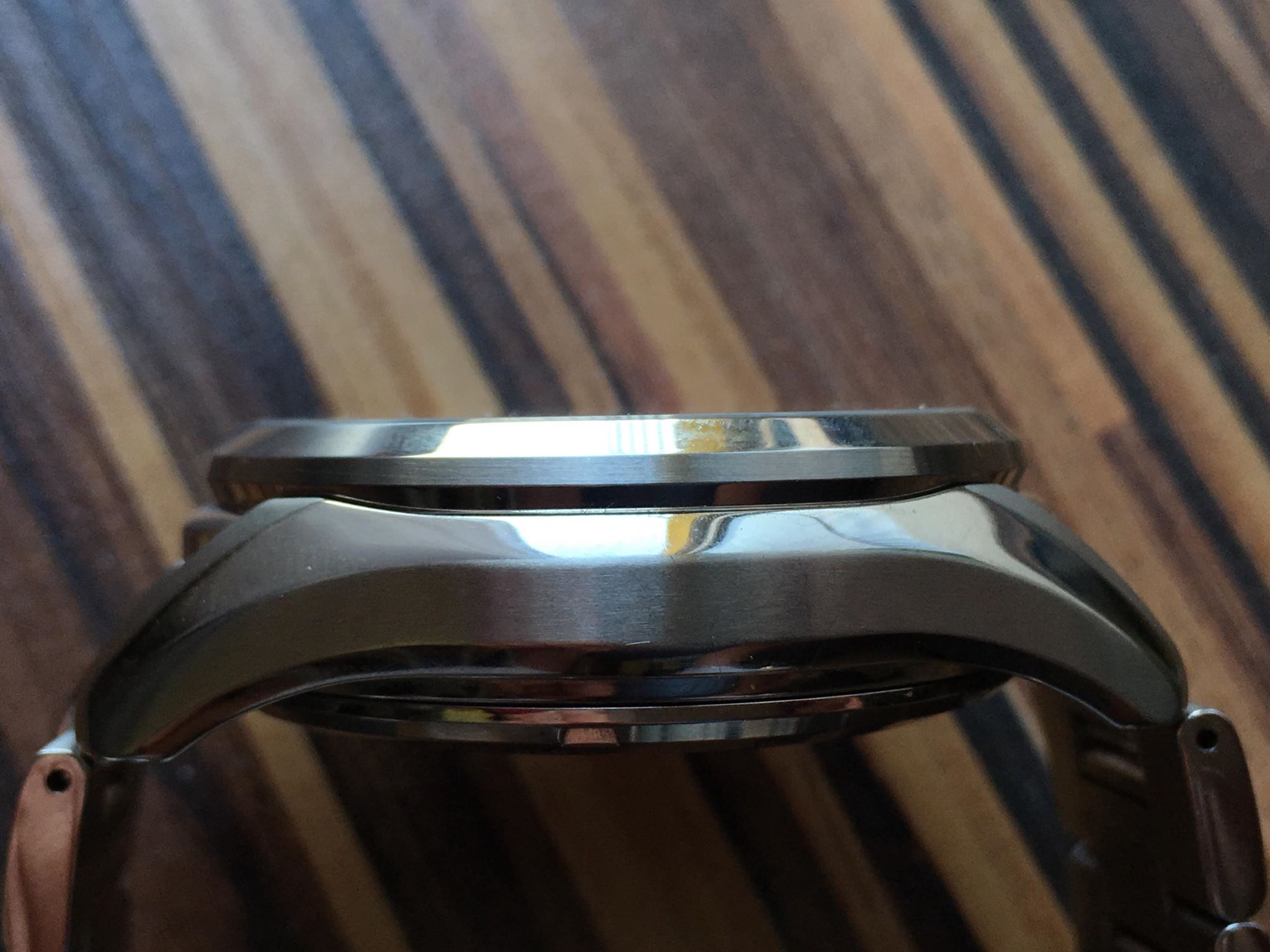 The most pleasant element of the entire watch is the dial. Its surface is entirely covered with a delicate sunburst, so it doesn’t seem boring.
From the inside of the bezel there is a ring with a painted second scale. Below is the next level, this time with an hour scale. The producer made sure that the indices stood out on a fairly uniform dial and even though they are silver in color, like dial, high gloss of indices gives the effect of contrast. Under the twelve o’clock you will find the manufacturer’s logo, and under it, the word “Automatic”. From 11:00 to 4:30, the scale of the power reserve is located in the cut-out element of the dial. The element is quite large and one can say that in a sense it becomes the dominant part of the dial. 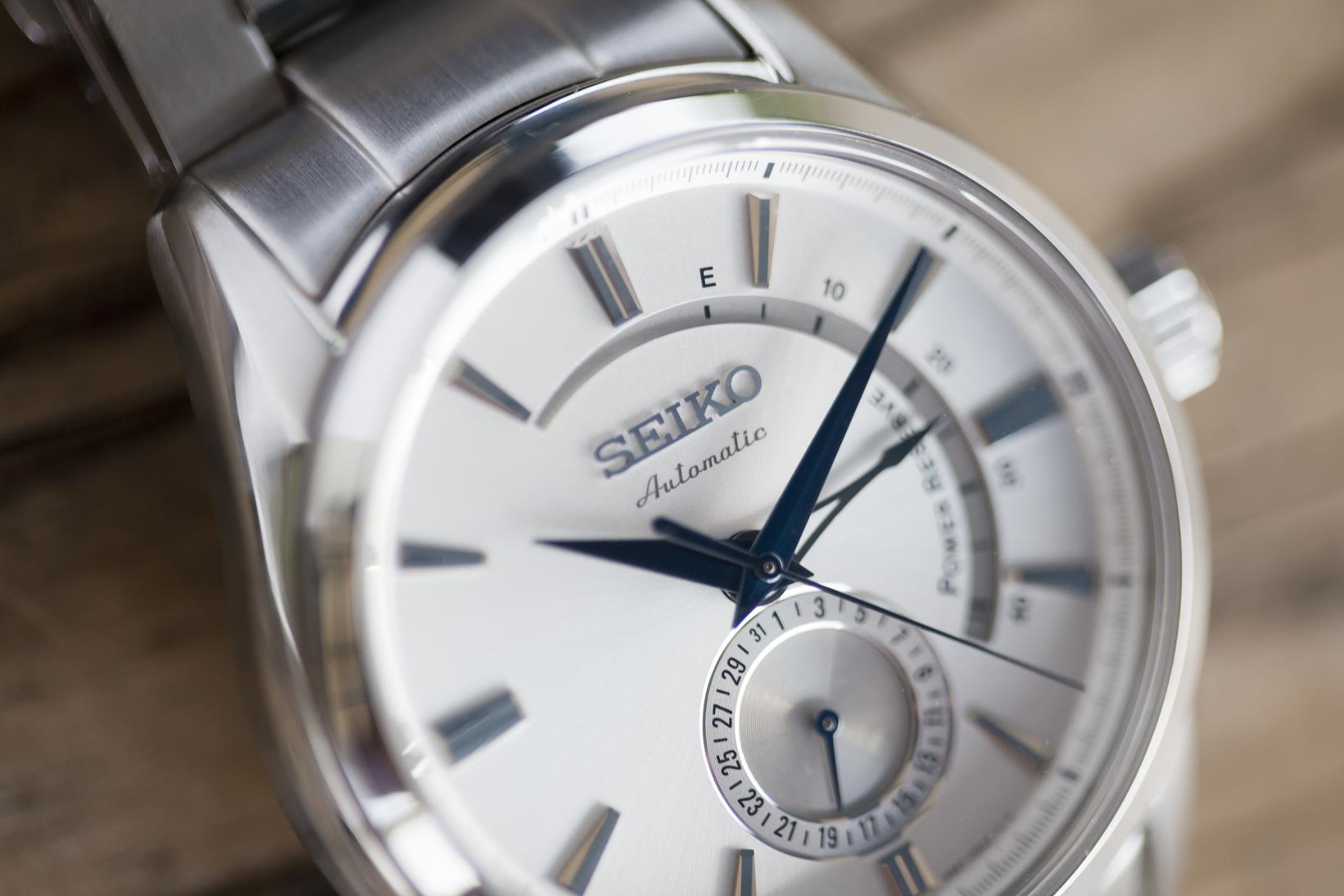 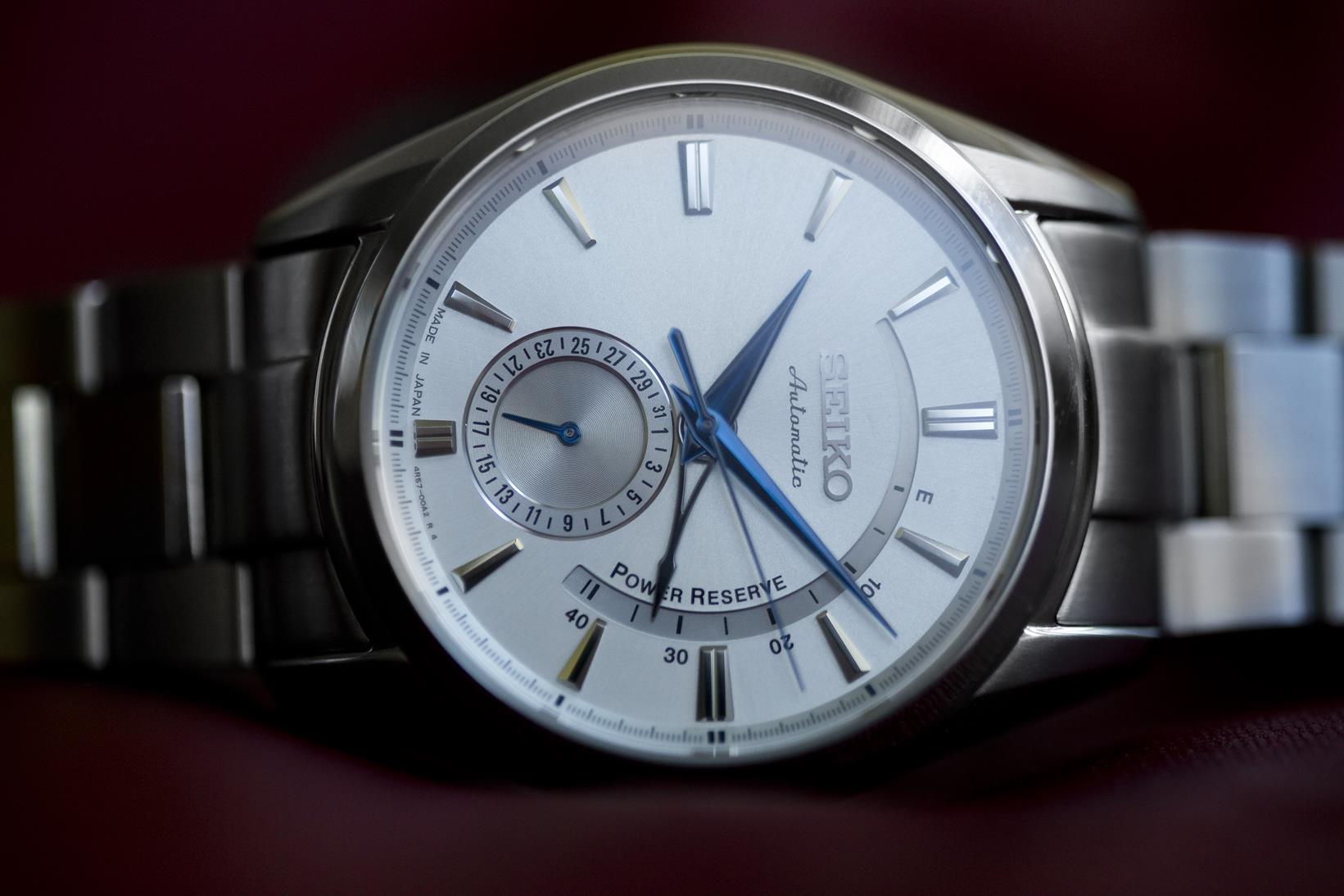 I don’t conceal that when I first saw this huge scale of power reserve in the pictures, I was slightly shocked. Seiko watches – especially automatic ones – until then seemed very toned to me, and here they went crazy and in my opinion they did it for good. The power reserve hand is openwork, oxidized and finished with a tip, which stands out it from the blue, minute, hourly and second hands. They are also finished in the style of “sword”, thanks to that its difficult to confuse the indication of the hour with a power reserve. 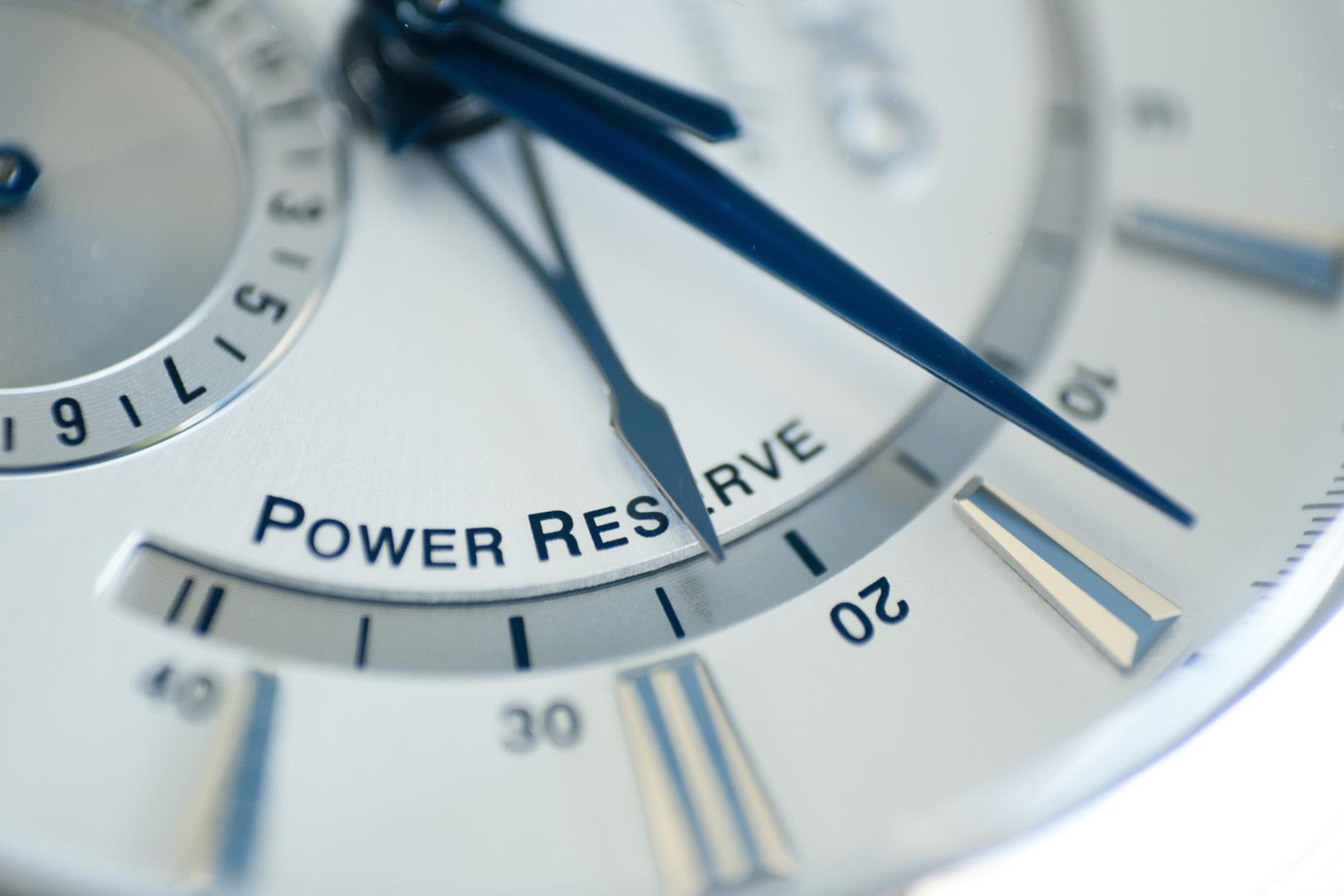 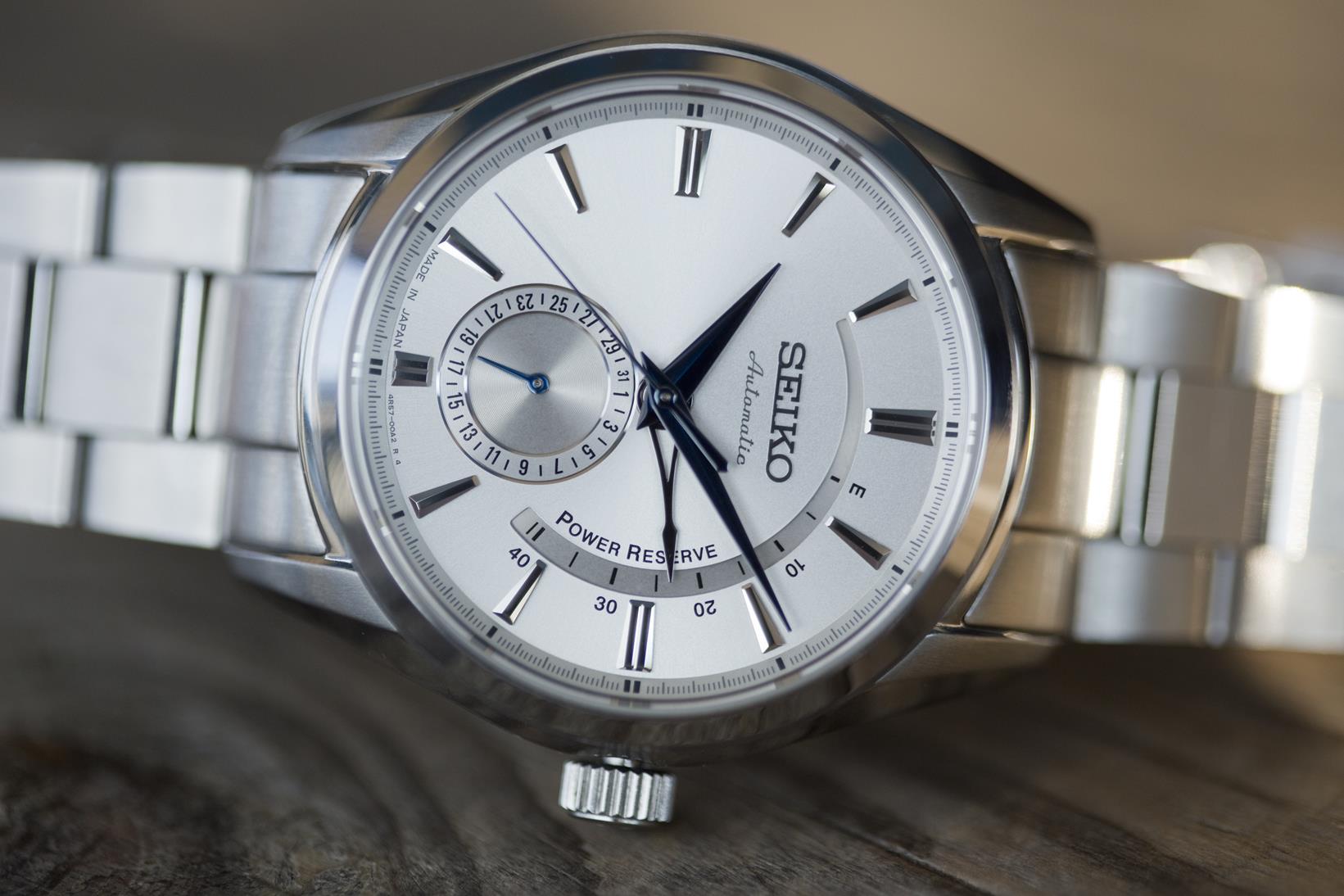 Another important element of the dial is a round calendar, which is located at the bottom of the dial. The reading of the day is possible thanks to the hand, which has also been thermally blue colored , thanks to which it works well with the other hands. 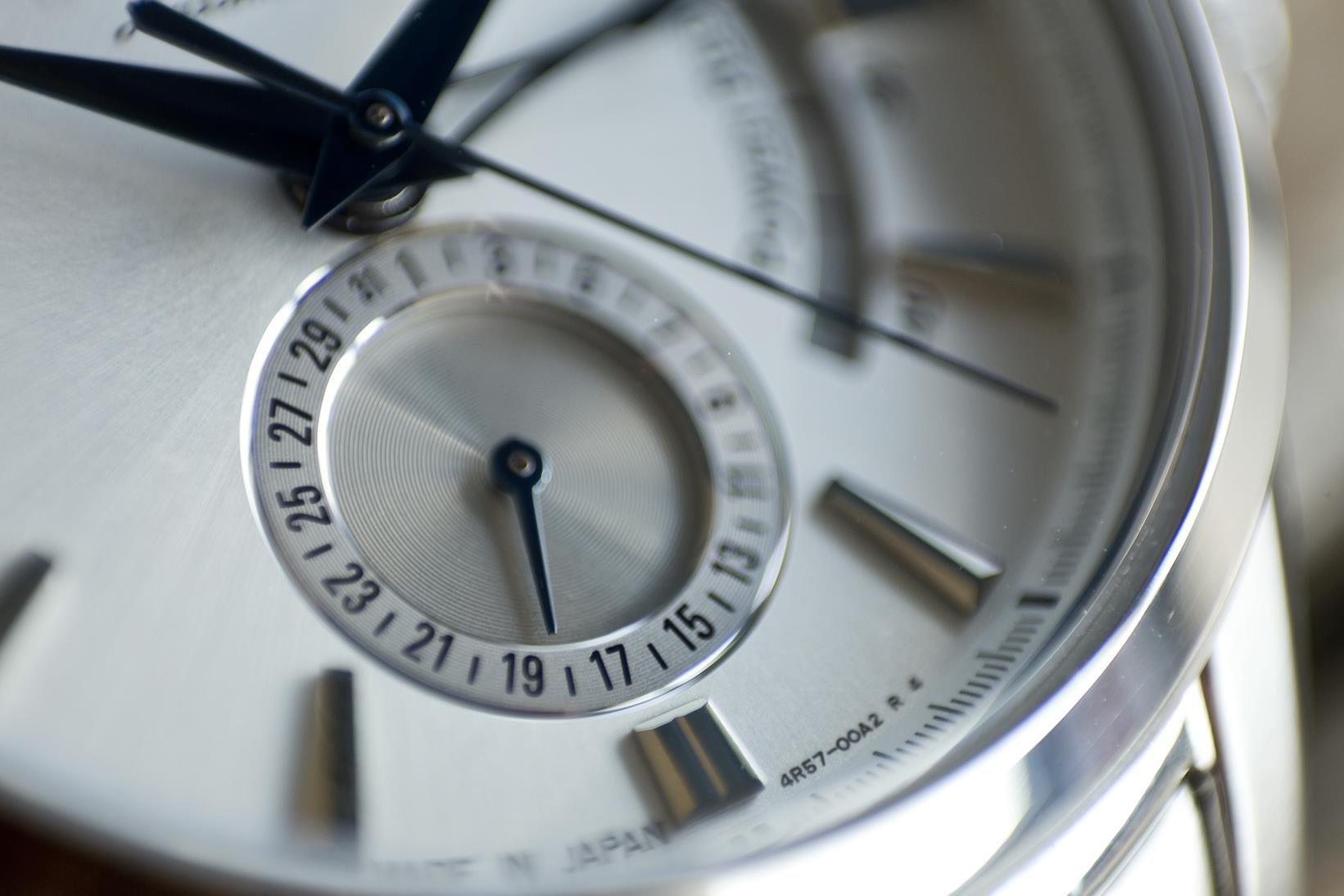 With a significant approximation of the indices and hands, and other elements of the dial, it can be seen that the quality in this model stands at an above-average level and matches that which I know from watches from “high end”. There is practically nothing to complain of, and even you can admire the quality of performance; especially if we take into account the price for which we can already buy this watch. 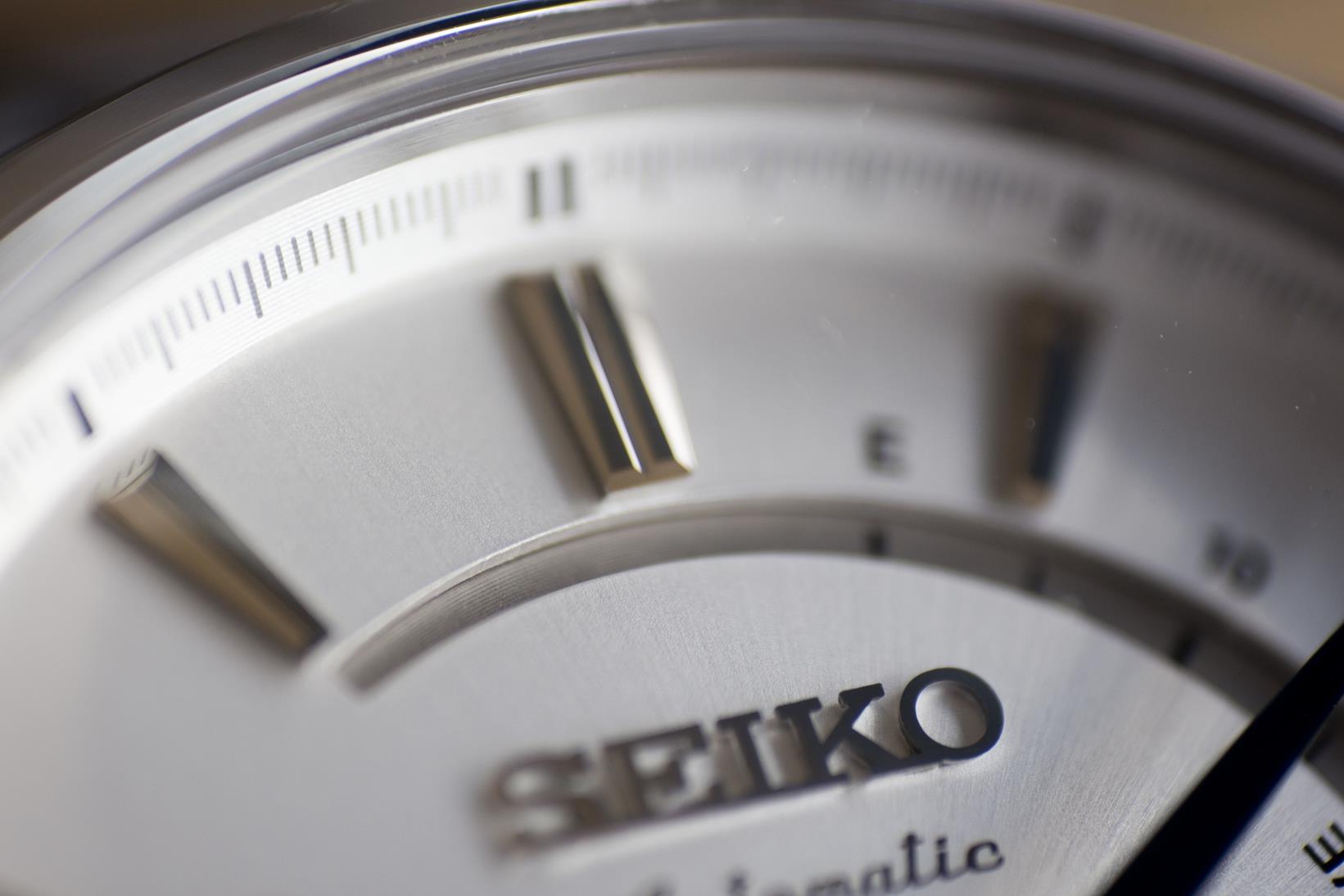 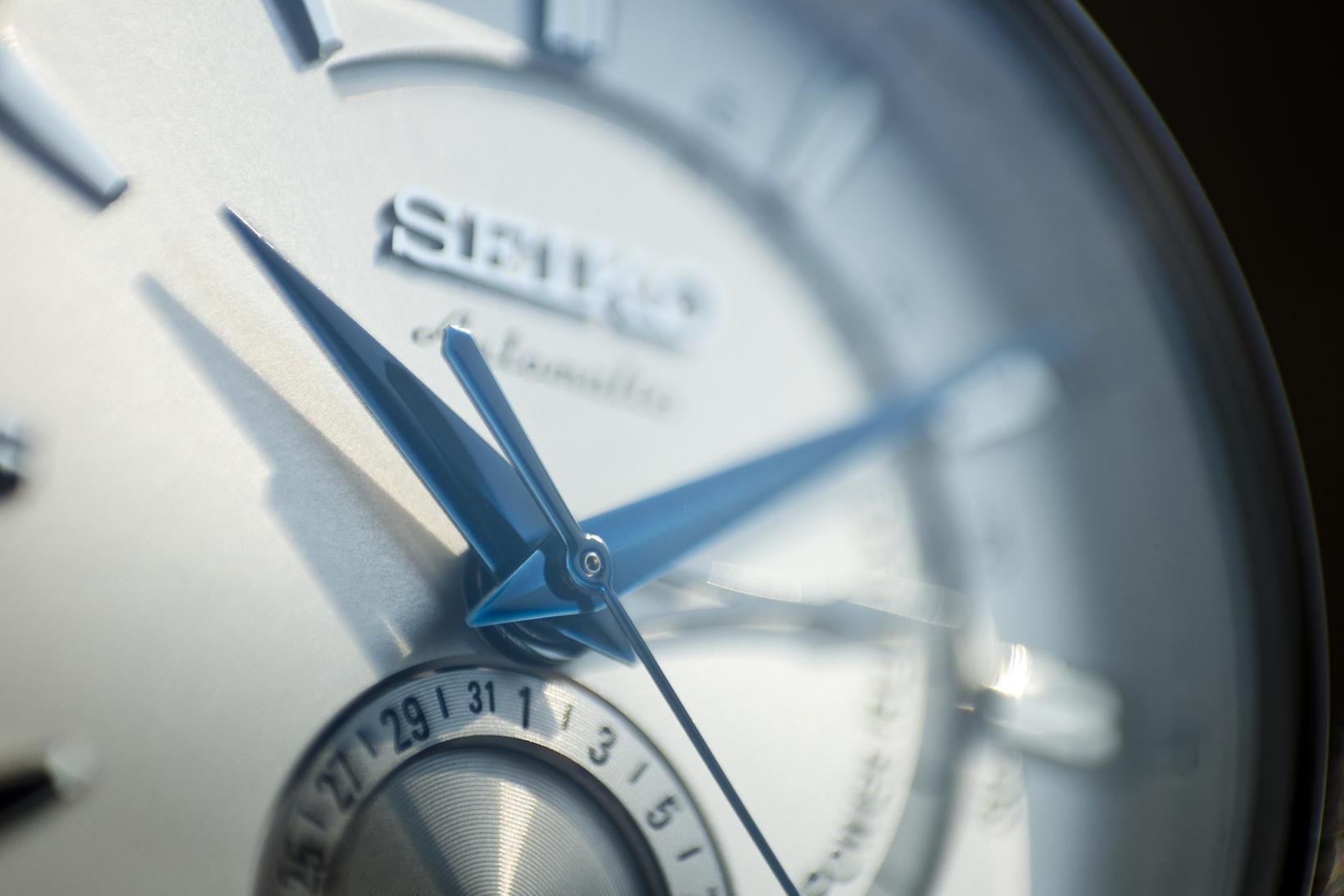 Seiko 4R57 mechanism was used here, bearing on 29 jewels. It has over 45 – hour power reserve, hand winding option and a stop second. As for the work of the rotor, it is quiet and pleasant. The spring doesn’t load too quickly. Achieving full power reserve is 2-3 times longer than eg in the Orient Star watches. If someone will use it a little, and have not bought a watch winder yet, it will be useful to hadn wind it from the crown, because after putting it on the shelf after a few hours of wearing it may not last until the next day. A great plus and reason for satisfaction is the accuracy. I practically did’t notice any major deviations and weared  alternately with six other watches does not require setting the time after removing from the watch winder. 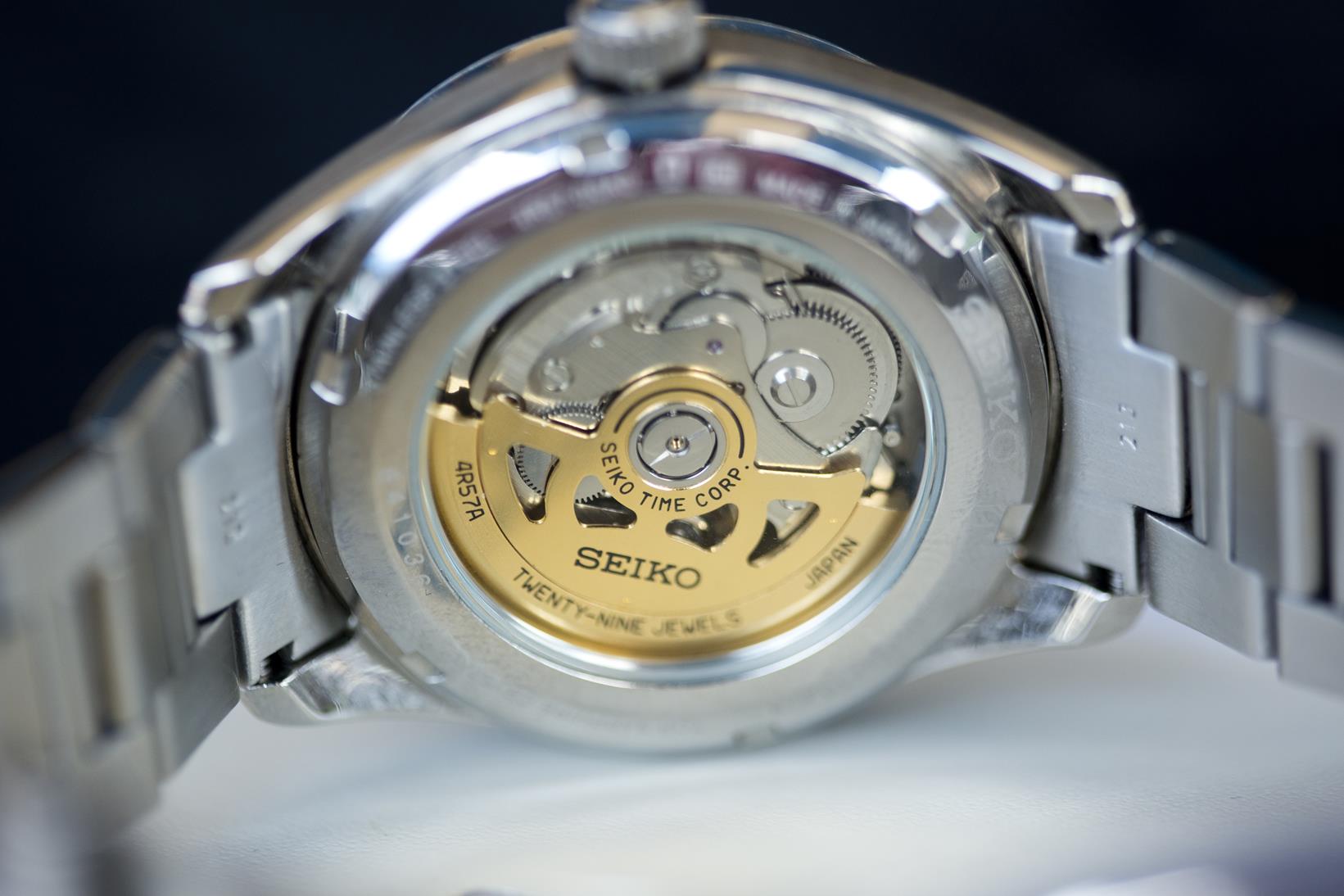 The bracelet is made very well, which Seiko has already accustomed us to. In this model it’s almost completely brushed, except for polished edges on the middle links. It’s very comfortable. Its lower part is crowned with an automatic, signed fastening. The end links are well fitted. Generally, even as a bracelet maniac I have nothing to complain of this bralecet. 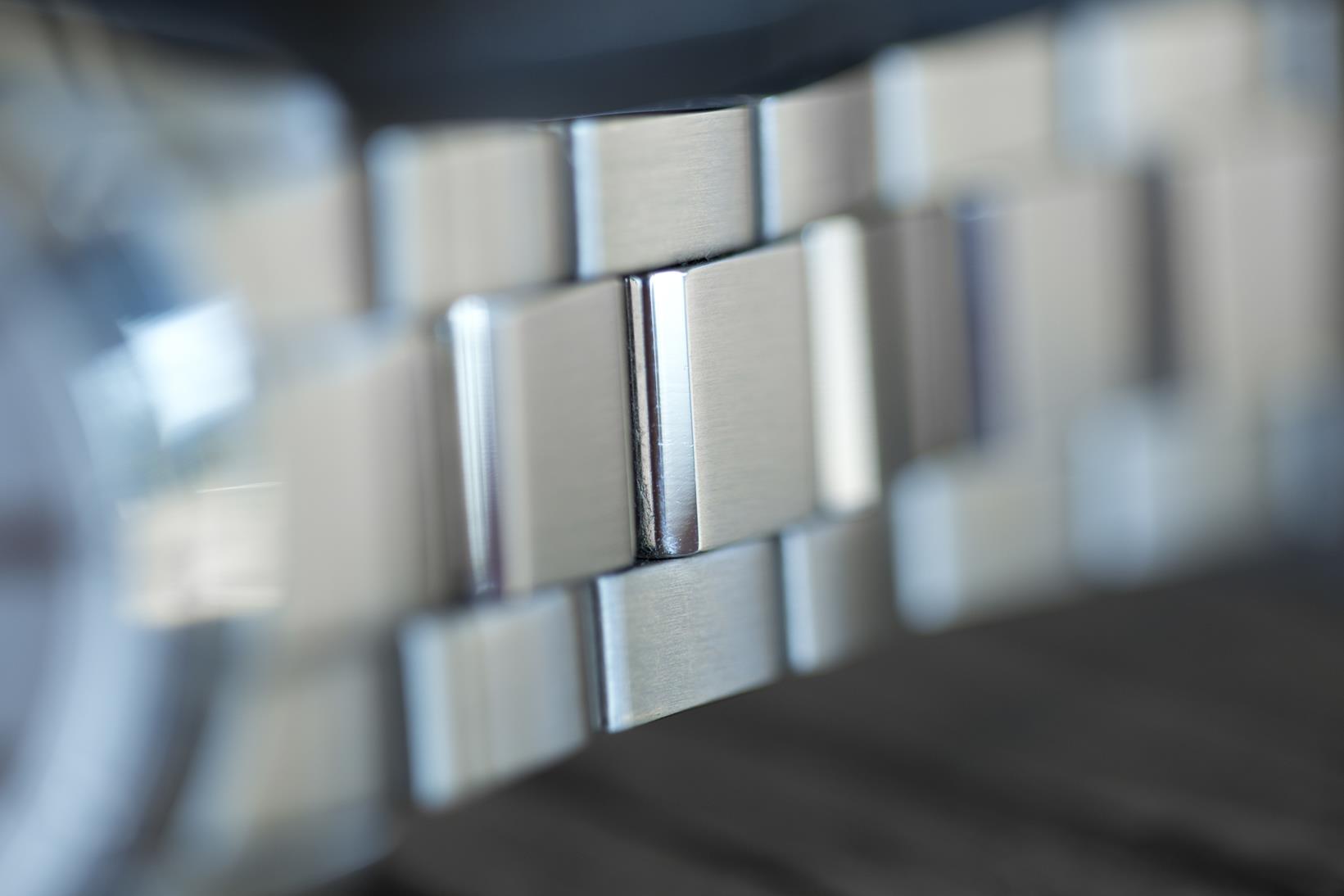 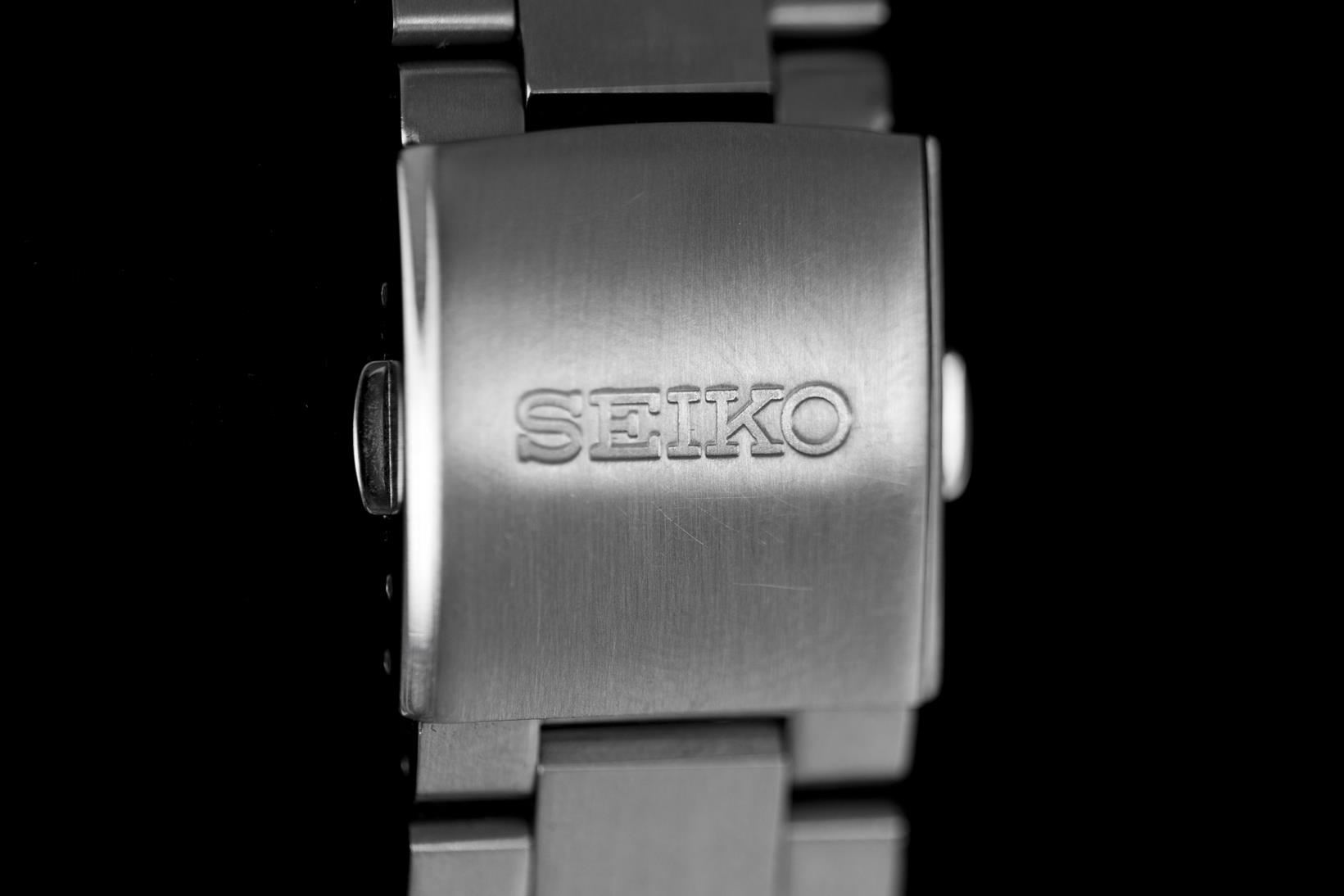 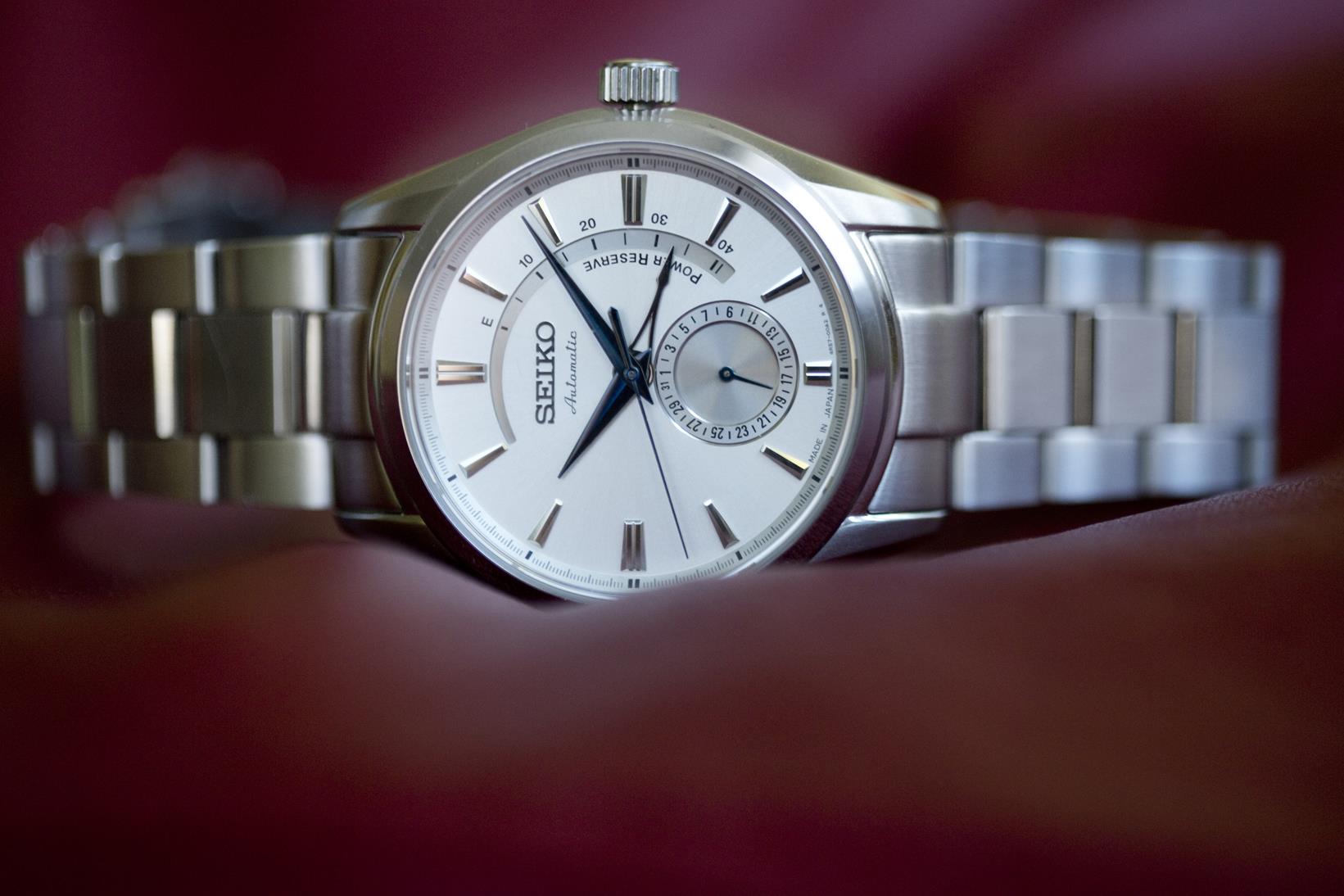 They say that you don’t enter the same river twice. As I always liked to stand out from the crowd, I entered the same river for the third time. Today is a month or so, since I bought the same Seiko model for the third time and I know that it will stay with me for a long time. Despite its height, it is the most universal watch I’ve ever had.
I think that at the price at which you can buy it (used around 1000 PLN, new about 1600 PLN), you will not find anything that could break SSA303J1 quality.
For too little, more than 1000 PLN you get a well-made watch with a good mechanism and flavor, in the form of colored hands, indication of the power reserve and calendar complications. 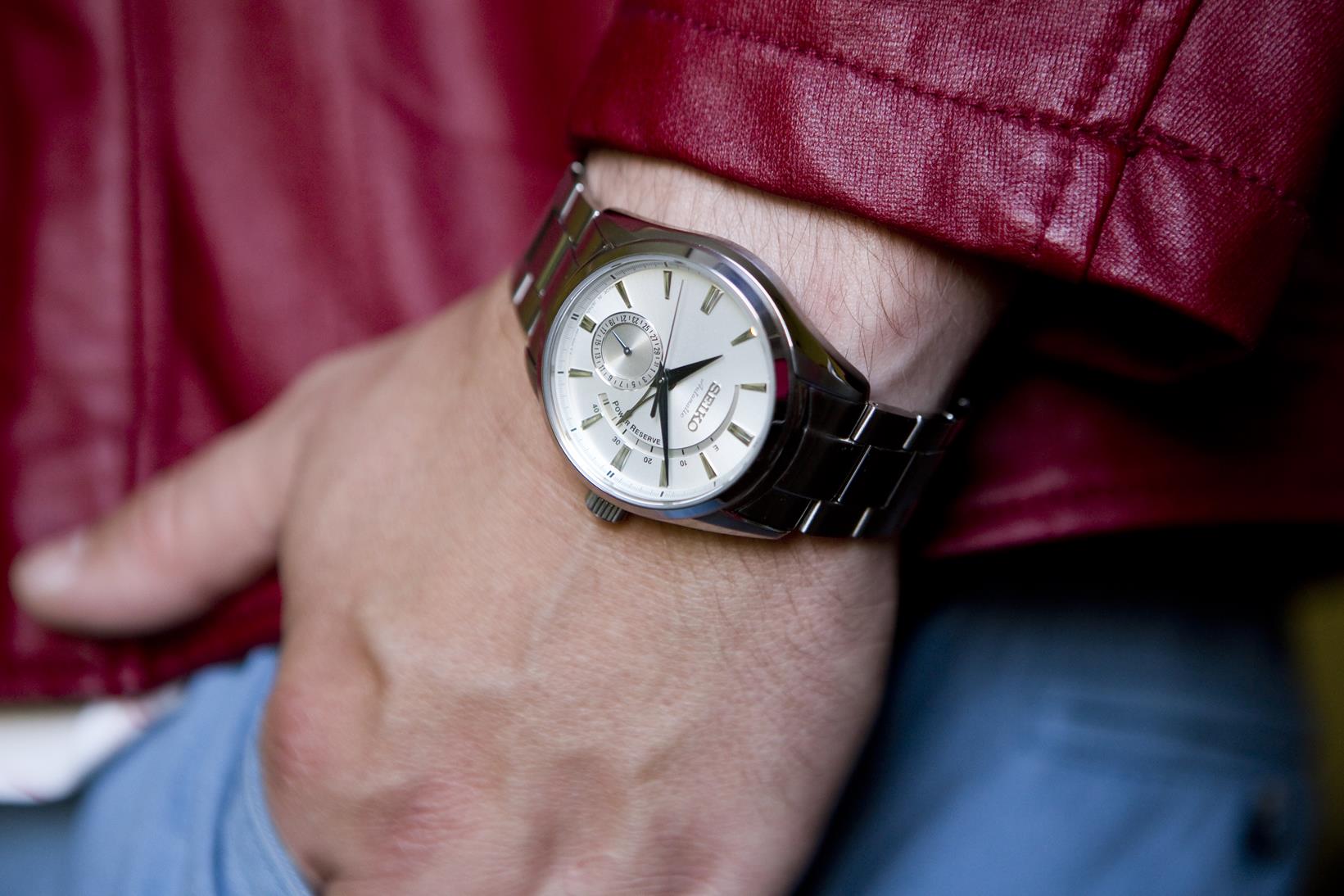