At the beginning it was Polpora …

I remember the first article about Polpora. It was 2006 or 2007. I was impressed by the fact that someone in Poland took up the resurrection of watchmaking traditions. The prices of watches were big and for the layman who I was at that time, also incomprehensible. 😉 I was a fan of Swiss brands at that time, but the budget of the technical school graduate did not give much imagination. Over the past few years, I ‘made’ several dozen different mechanical watches, and passion crossed the roads – mine and Konrad. Thanks to this, we can fulfill small watch dreams and discover the world of watches, including looking into the “watch kitchen”. When he wrote that we would go to Polpora, my heart beat faster because they were the pioneers in our country.
A reportage of visits to this company can be found on our blog. It has become a tradition that we import one watch from every such journey, which we will test. This time the choice fell on the most sporting – from the entire collection of Polpora watches – the Globtroter model.
I invite you to a short review of this watch 🙂

The width of the case without crown is 42 mm, and its thickness is only 10 mm. Thanks to such proportions the watch lies very well to the wrist. The lug to lug of the watch is 51 mm. It’s a lot. In turn, a wide-ranging bezel and, consequently, a large dial, gives the impression that the case looks more than 42mm. The space between the ears is 22 mm and seems to be the optimal size. The sides of the case are brushed, and the lugs and bezel are polished. The quality of the finish is in this watch at the highest level. At the third hour there is a crown with engraved Polpora logo. The crown is stiff after placing in positions 1 and 2, which is not a rule in watches, even in this price range. 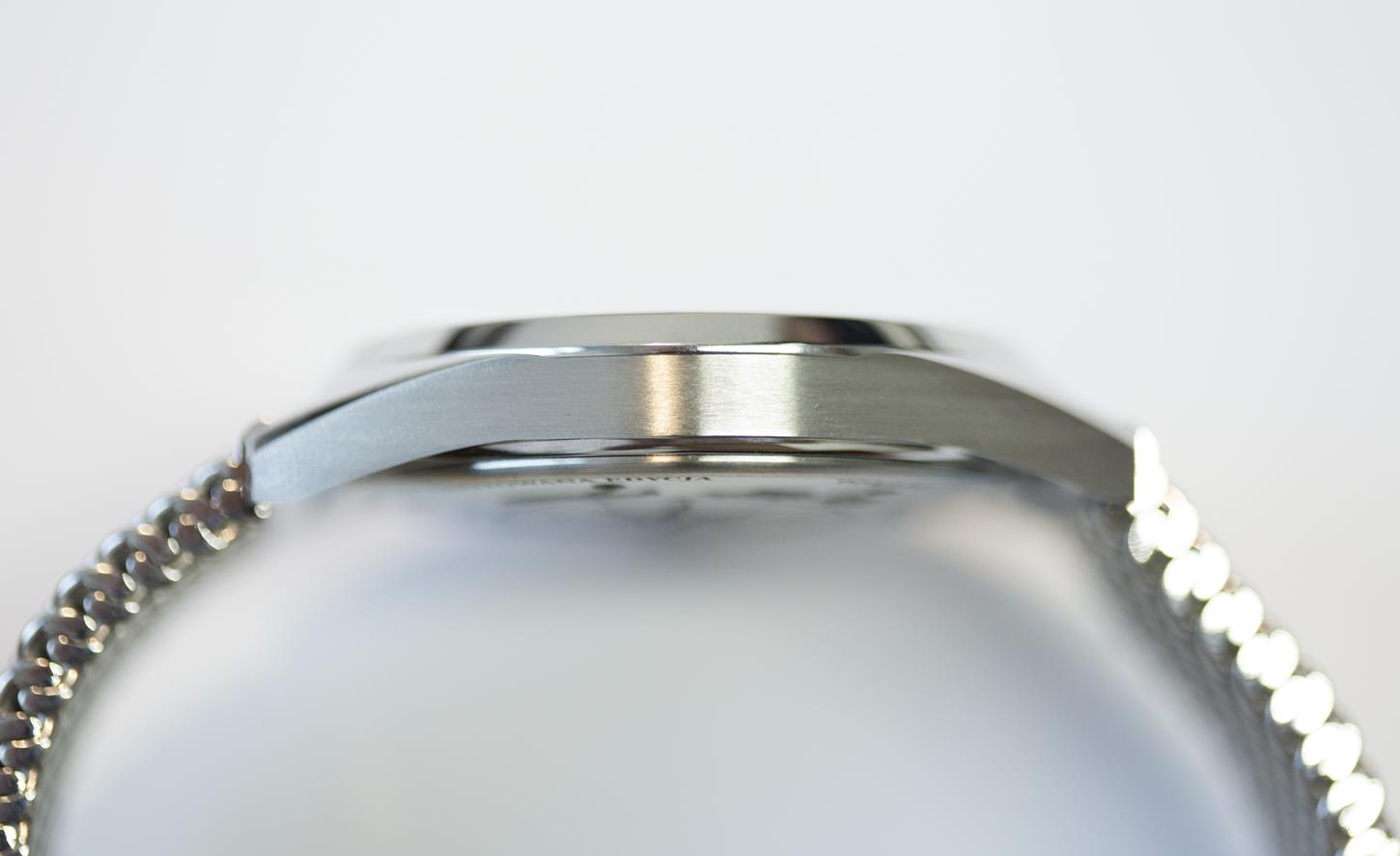 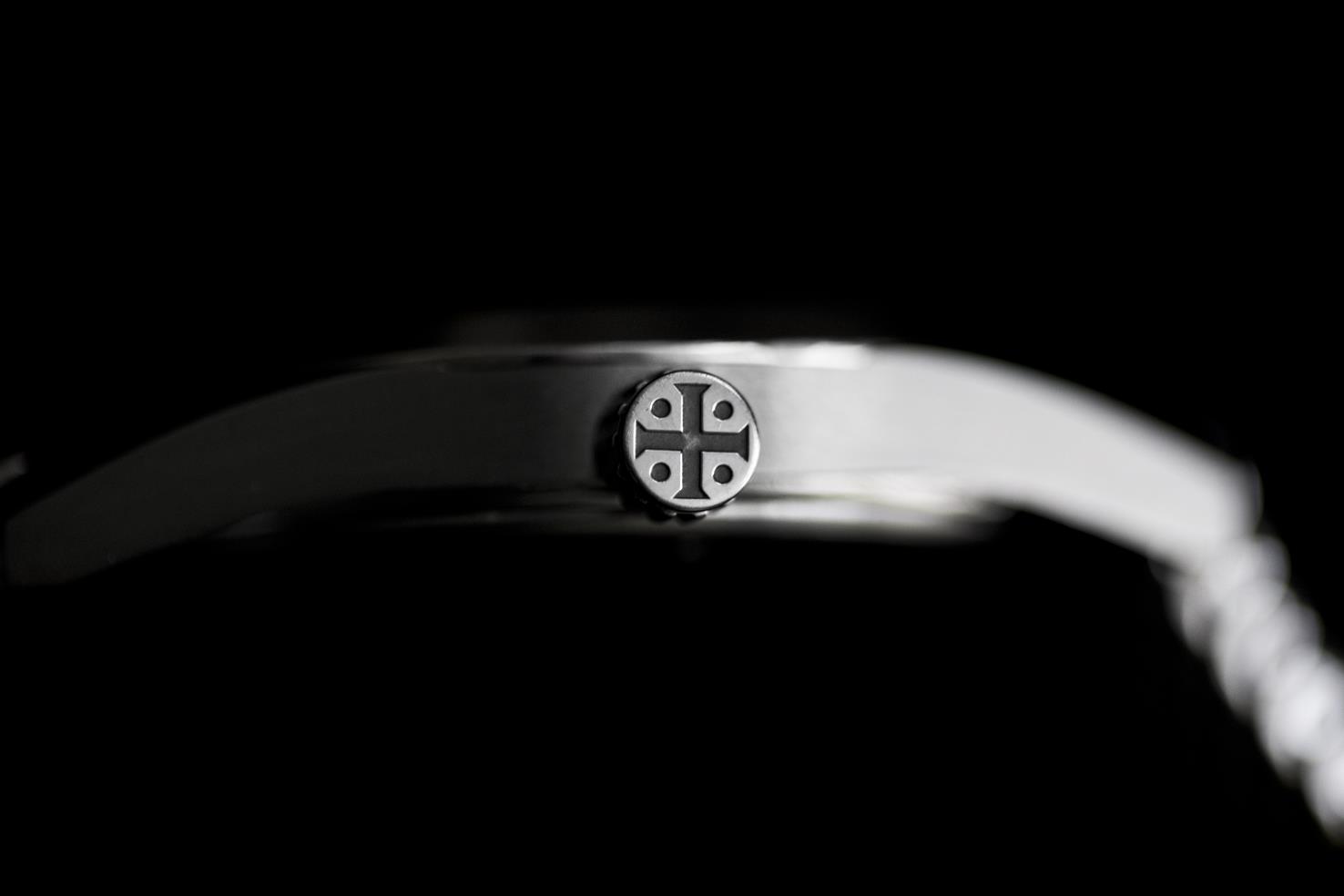 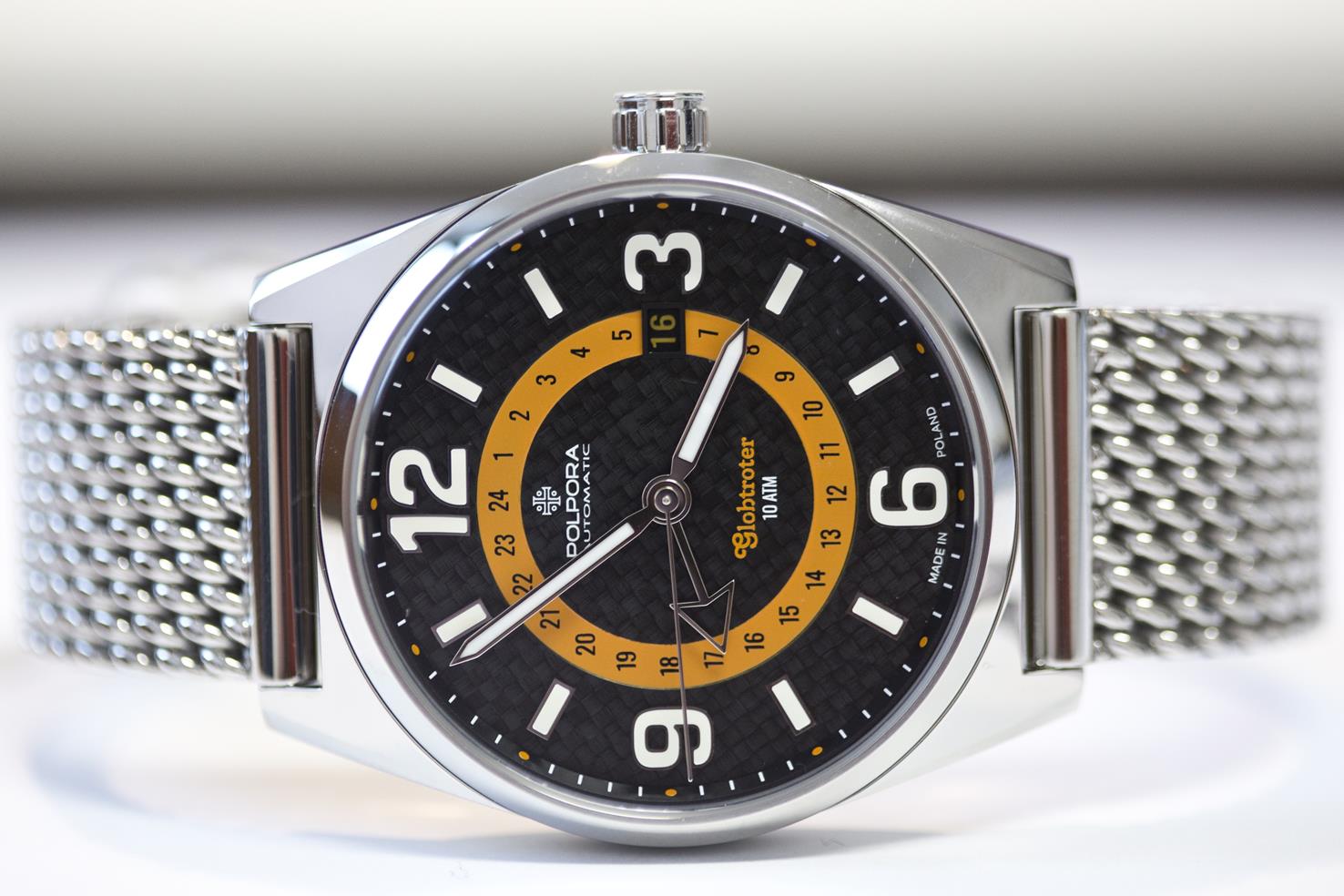 The watch is closed by steel case back on the circumference of which we can find information about the waterproofness, country of origin and reference number, and the limit number. We will also find in its central place a wind rose, enclosed in the contours of the globe, and around it engravings of known means of transport, referring to the name and character of the watch. Generally, the first impression about the quality of the case is very good and what is important does not leave us with the next attempts.
When I saw Globtroter live for the first time, I had the impression that I had seen this watch before. After a few seconds I realized that the subconscious was prompting me with Glycine SST-12, which I had in my collection for some time. This is probably due to similar colors of the watch. 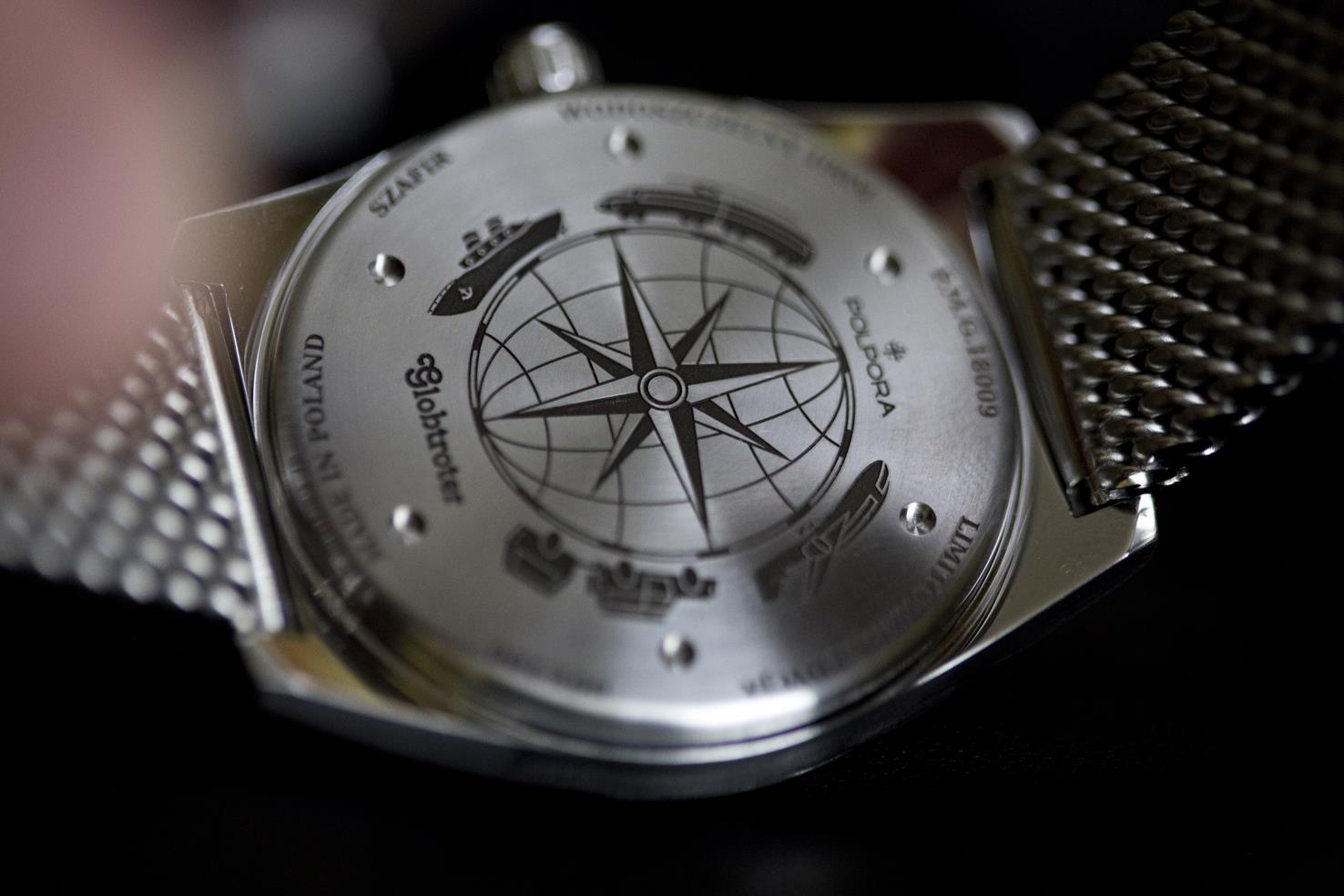 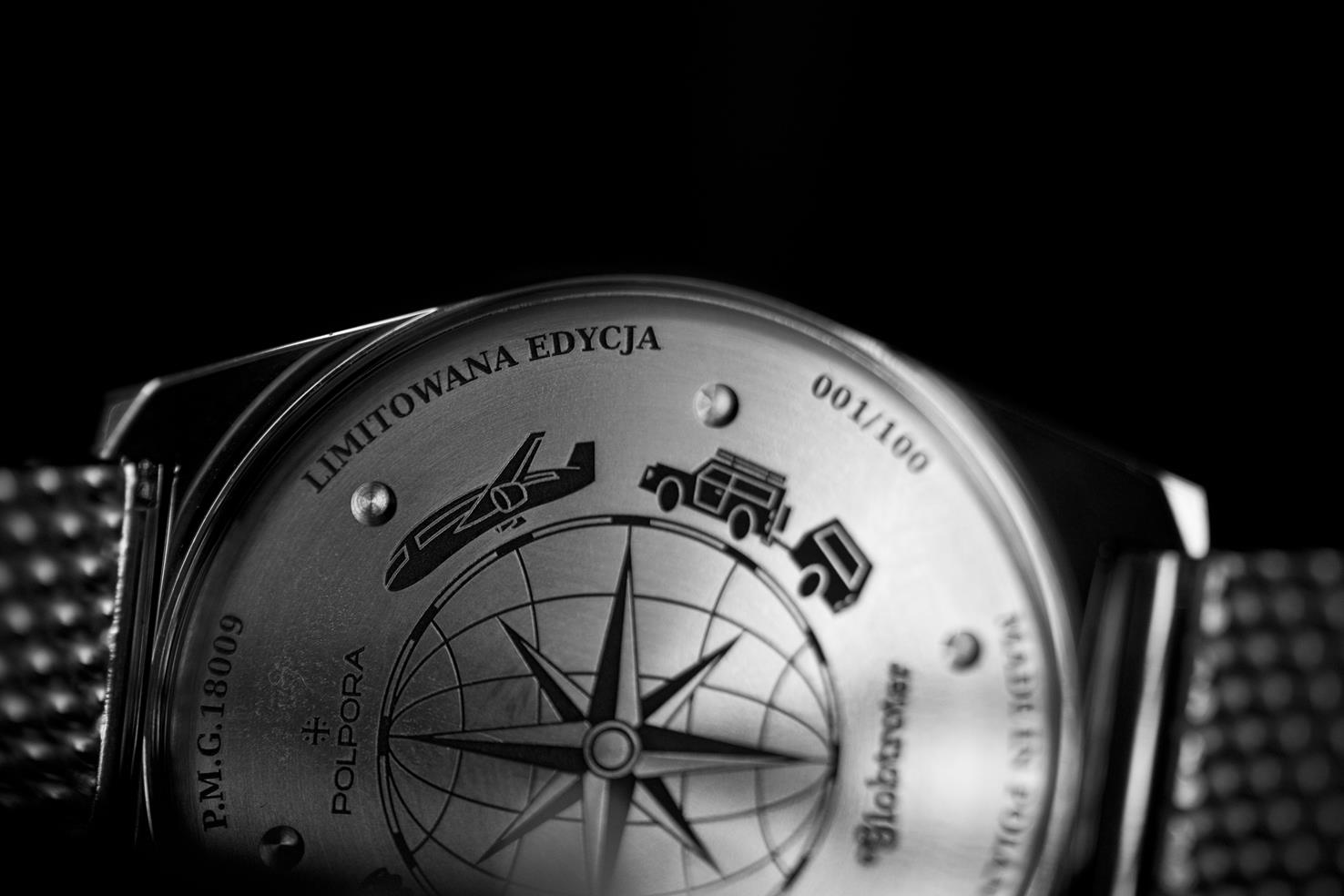 A mesh-style bracelet that gives a little bit of a vinty look.
The width of the bracelet in the ears is 22 mm as mentioned above. The whole is solidly made; feel it at first contact. It is thick, “fleshy” and gives the impression of being indestructible. It has micro-regulation on 10 holes, so we can perfectly fit it to your wrist. Buying Globtroter, we can choose the size of the bracelet and further adjust it as you like. The buckle is also extremely solid, has a double protection against the span, and the additional flavor is its internal element, which has been pearled. On the smaller fastener element we will find the manufacturer’s logo.
As you have noticed in previous reviews, I am a big fan of bracelets.
Here, I summarize briefly: I have not seen a better mesh bracelet yet…. 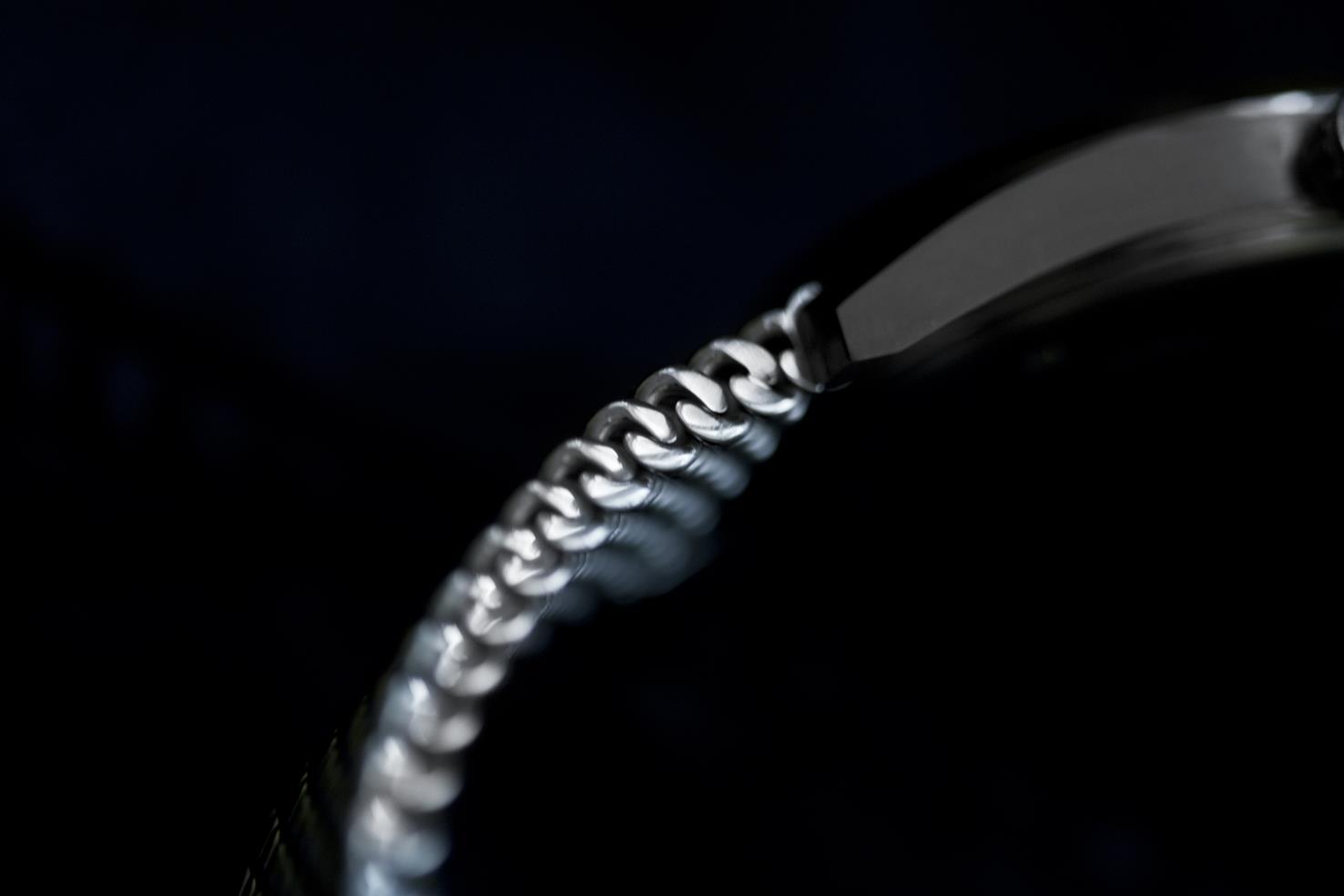 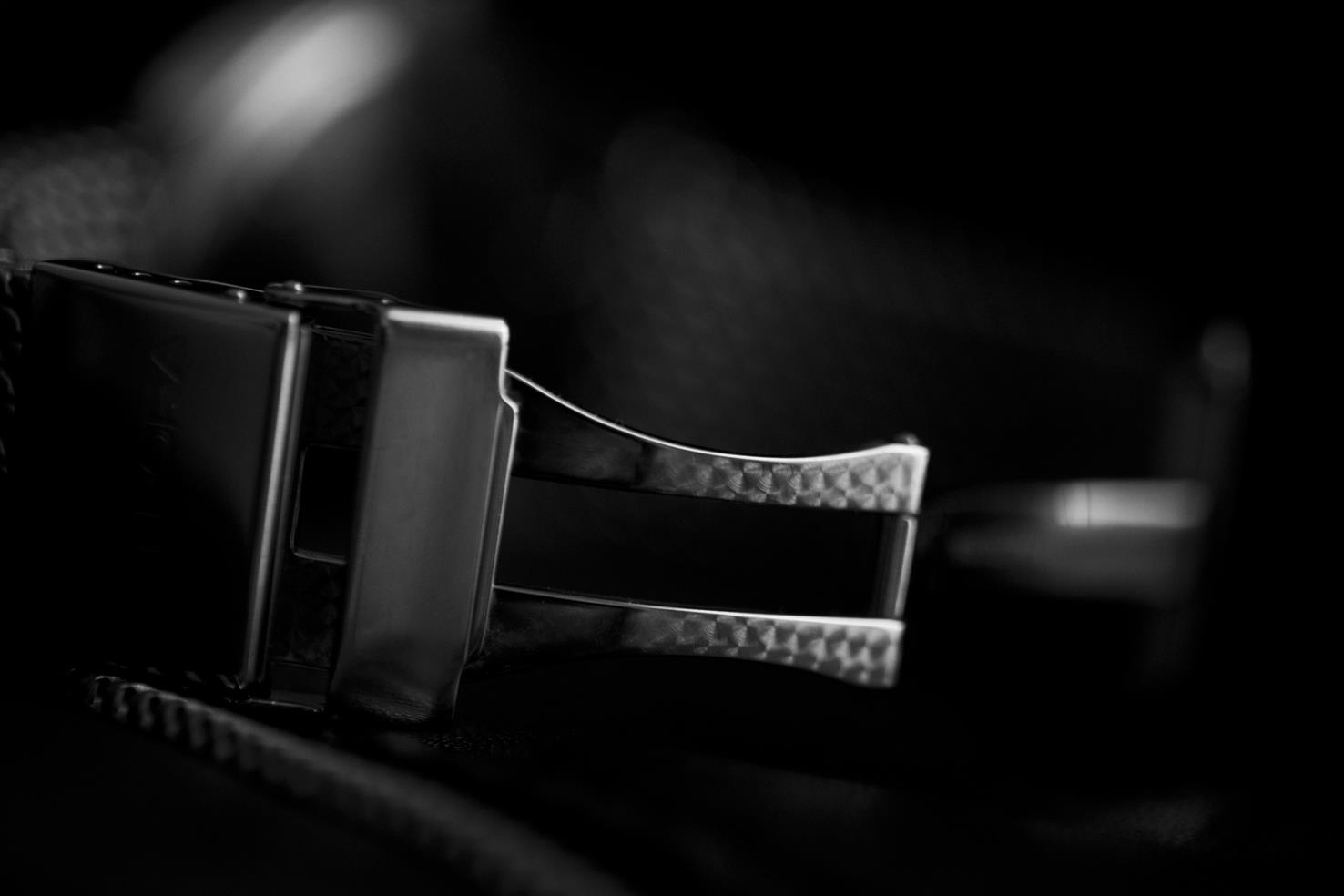 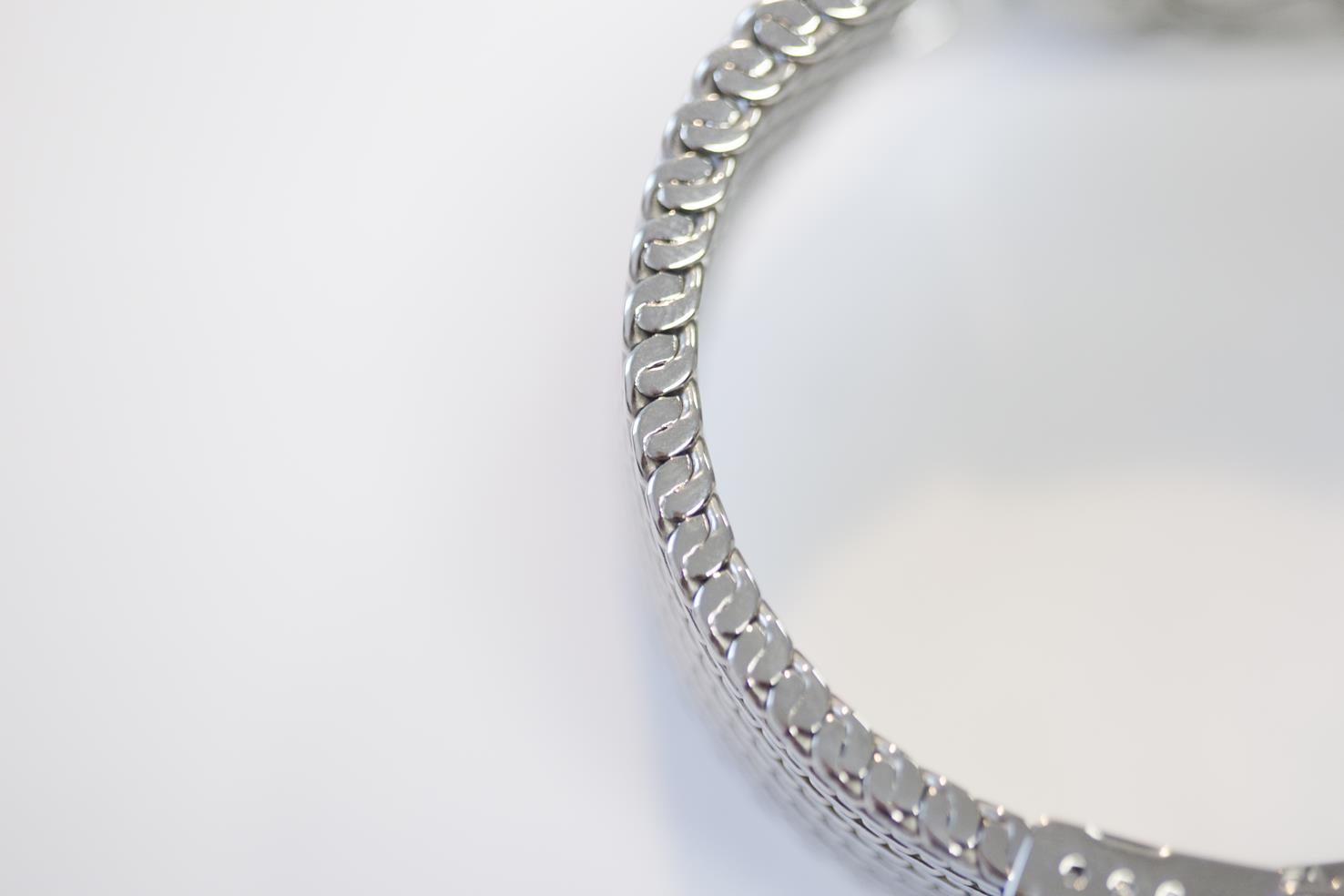 The dial is black, which has a carbon structure, but the first thing that catches the eye is an orange inner ring with the 24h GMT scale, whose readings are read thanks to the tip finished with a large, skeletal arrowhead. The producer’s logo, information about water resistant and the name of the model can be found inside the orange ring. At three o’clock (sixth of the GMT ring) this ring is interrupted, and we see a window of the date stamper, where the indication is the reversal of these colors from the ring. The background is black in this case, and the day of the month is orange. A very good idea that really surprised me. 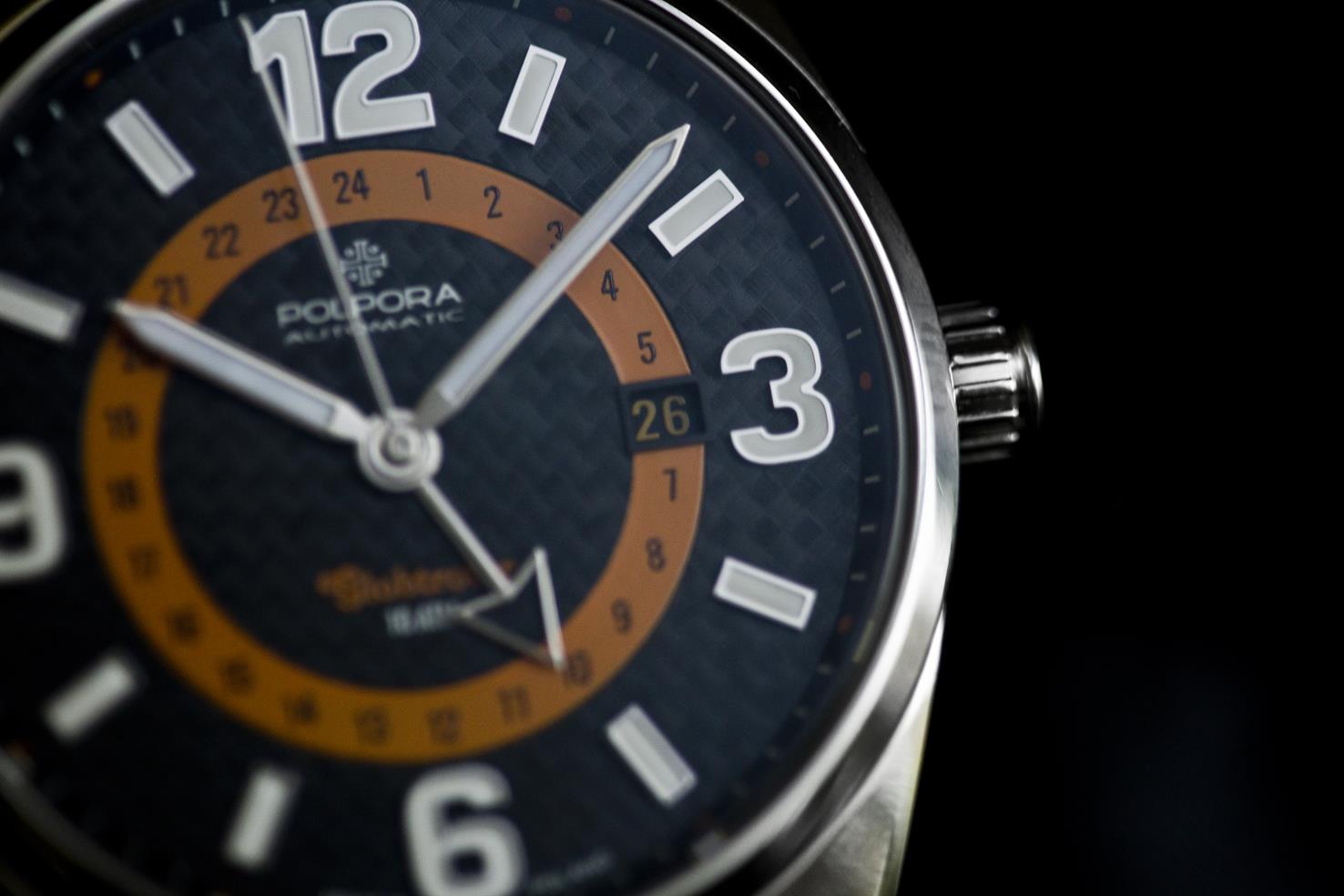 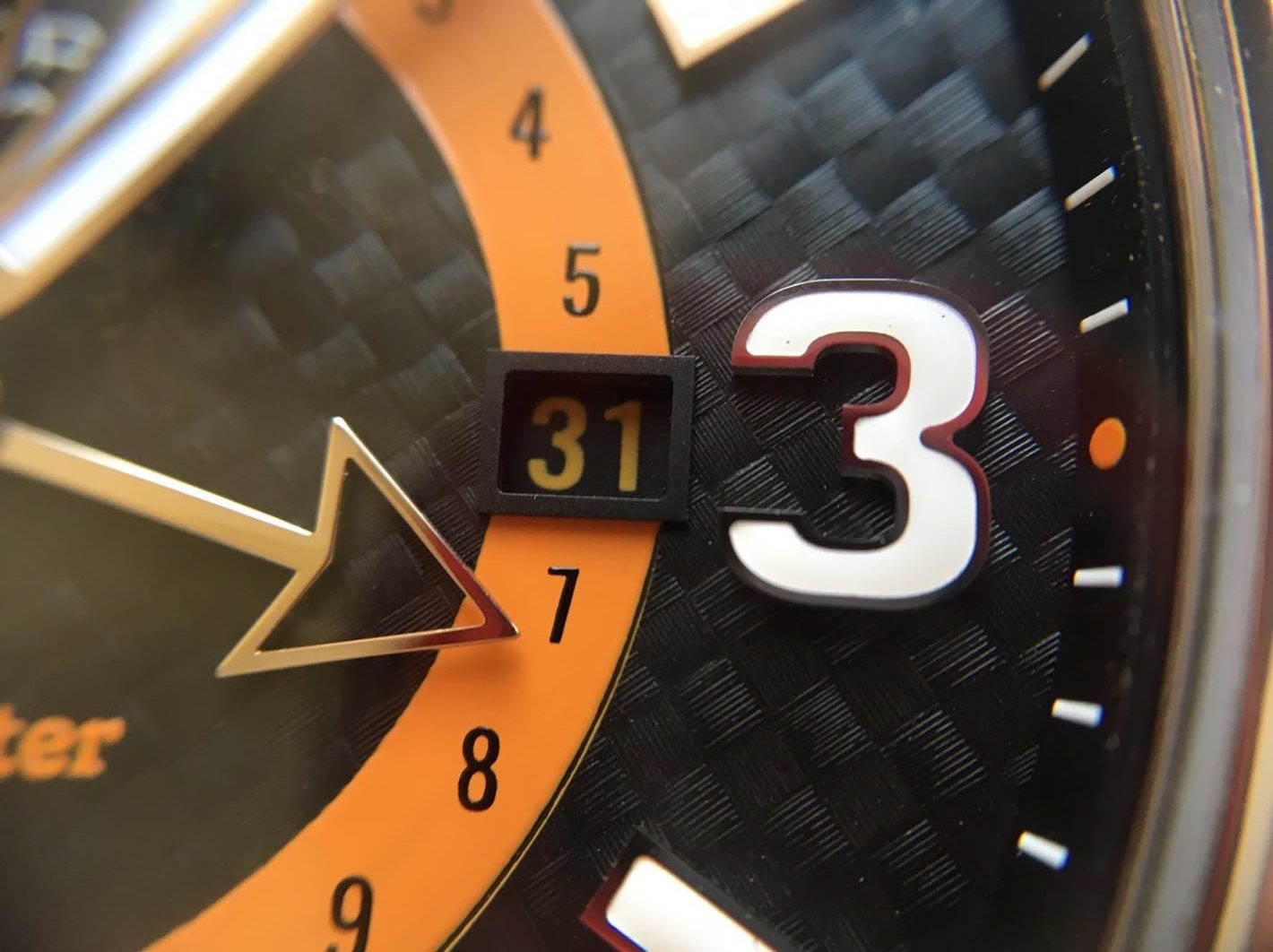 Around, on the carbon dial, we find high, polished indices, richly filled with SuperLuminova C3, which shines intensely and for a long time. They cut off very strongly from the carbon structure of the target, so that the digits are very readable even from a distance. The same mass is filled with an hour and minute hand. The silver seconds are simple and no longer luminescent. Around the bezel you will find a minute scale, where every 5 minutes there is an orange dot, referring to the GMT ring. The whole is closed with sapphire glass with strong, internal anti-reflective. 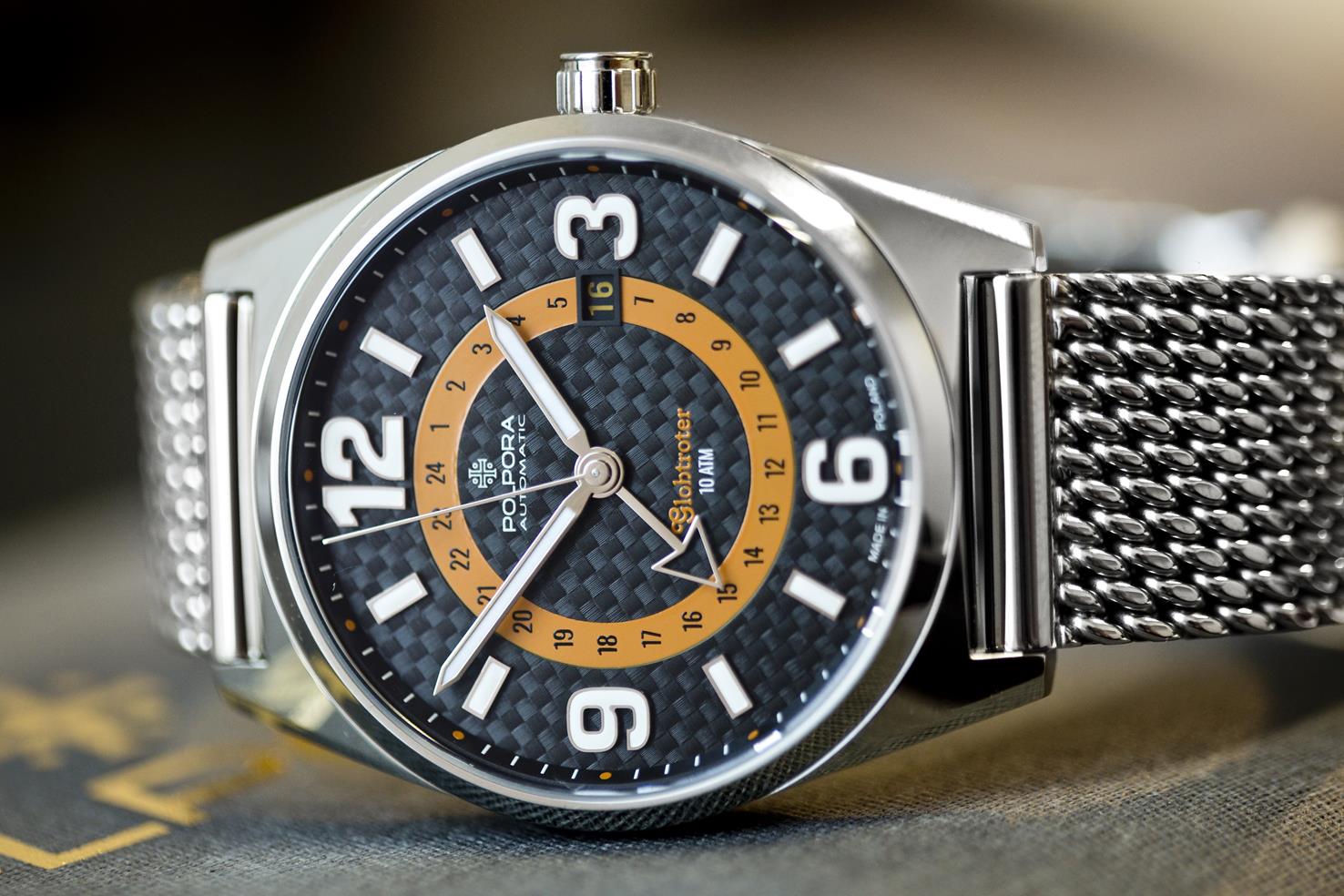 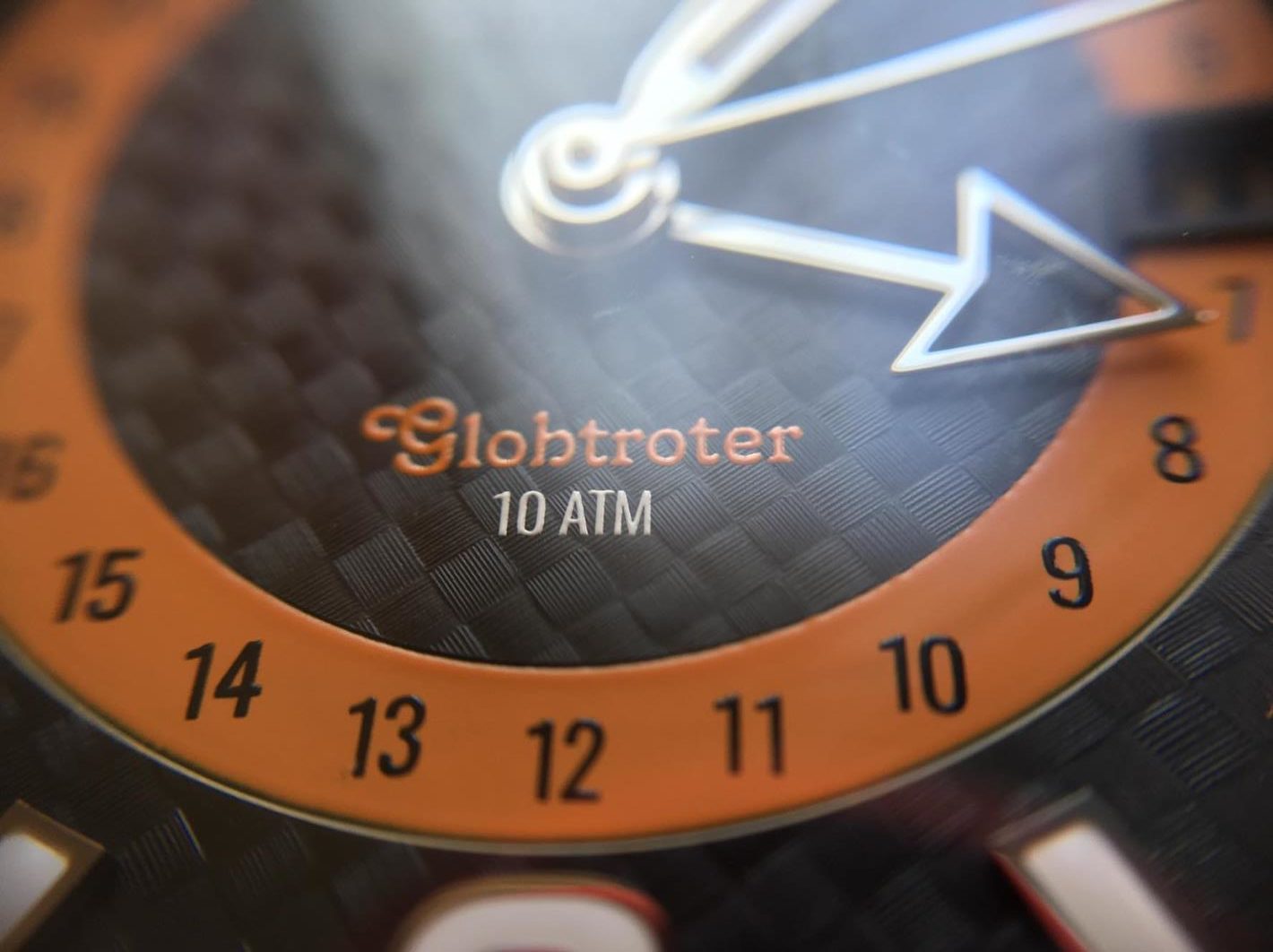 The heart of the watch is Sellita SW-330-1 in the Special version. The movement is mounted on 25 jevels. Has a stop second and handwinding from the crown. This is a good movement and nothing is inferior to its twin, ETA 2893, and I don’t know if it is even better by using more jevels.

We’ve reached the end of Globtroter’s review. I remembered the return journey from Zielona Góra. According to Konrad, we found that the watch was thought from beginning to end. We were surprised by the date stamp, in which the indication of the day is orange. We also liked the high indices, which contrast greatly with the black carbon dall and which we can admire through the glass with really very good AR.
The bracelet has already introduced us to delight. According to the information we obtained from the company owner, all components are manufactured in top companies in Germany and Switzerland. Unfortunately, this is reflected in the price, which is PLN 6800. Is this a lot? I will not answer this question. You can answer them yourself, being aware of how this watch was made of and how it was finished. I think that we have nothing to be ashamed of and Polpora can compete with companies from across the western border when it comes to quality. 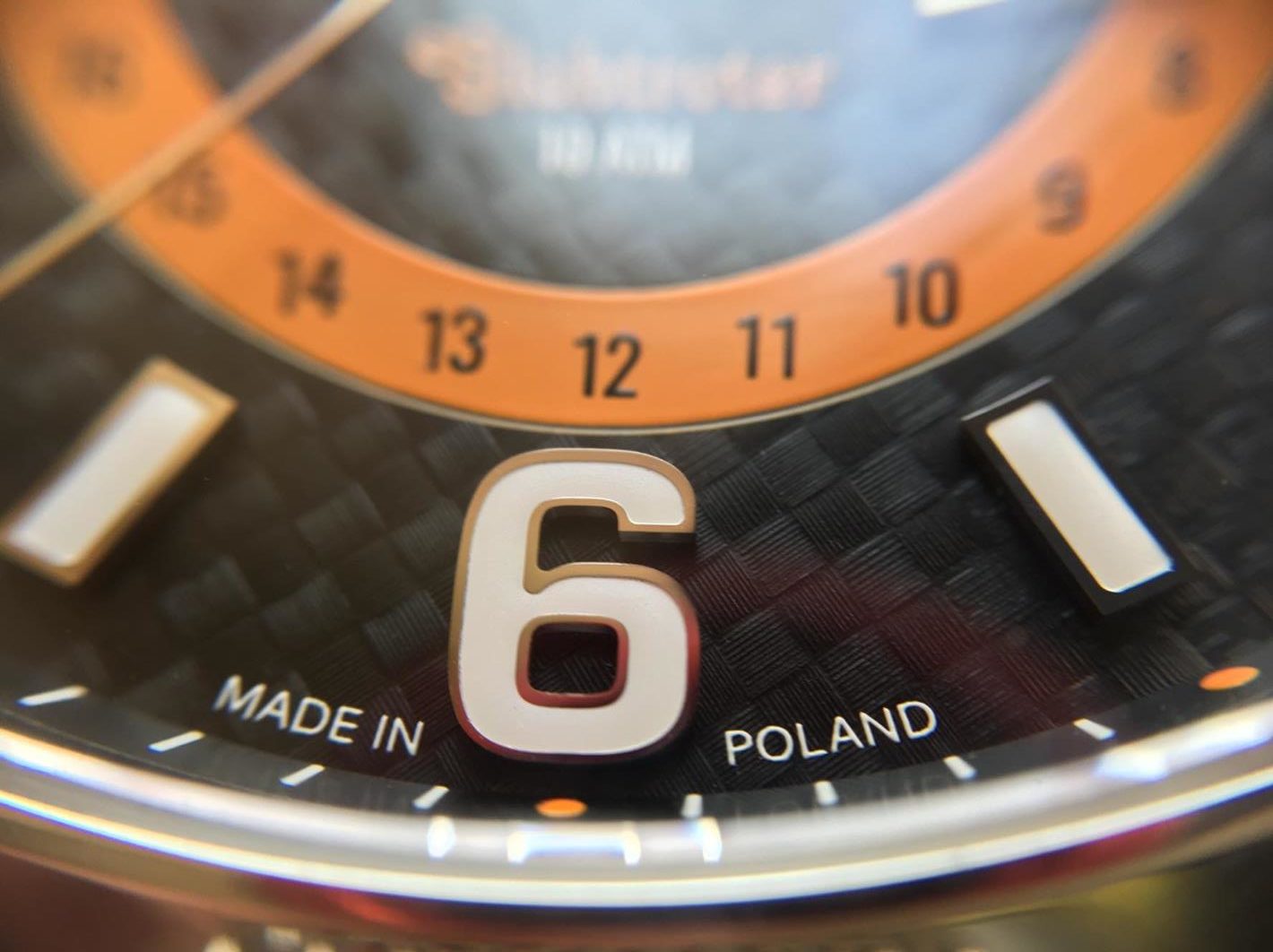 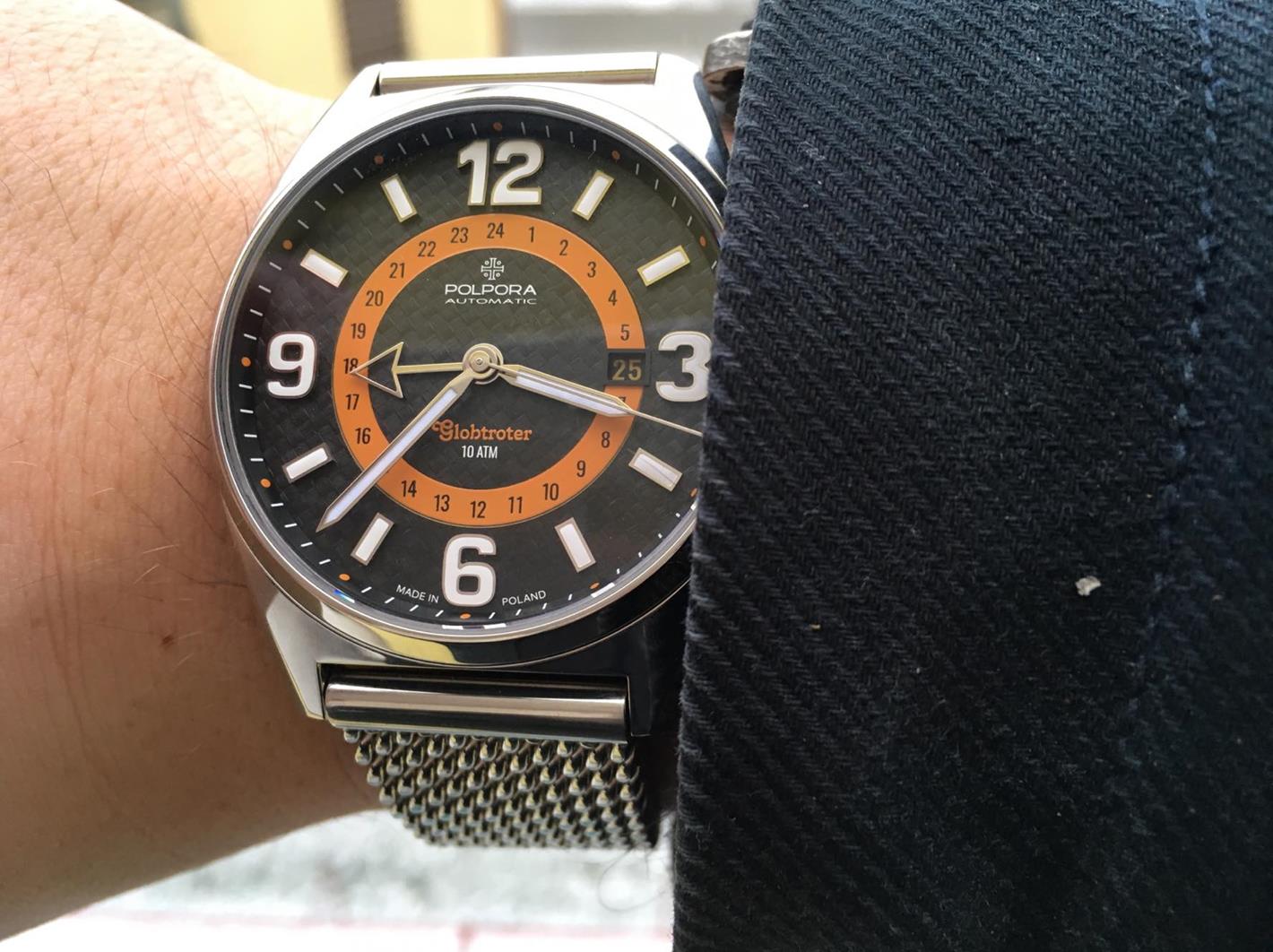