The most beautiful contemporary version of the pilot watch

This is what I’ve thought every time I saw a picture of this watch. I wanted to see it live and courtesy of Peter Kožár – the owner of the Biatec brand, who agreed to send me a used copy for a two-week test. I wasn’t sure if I would buy this watch for myself, but I really like another Biatec project that’s currently in pre-order – diver Leviathan. The opportunity to test their other watch is an opportunity for me to answer the question “whether to buy a Biatec diver watch”. 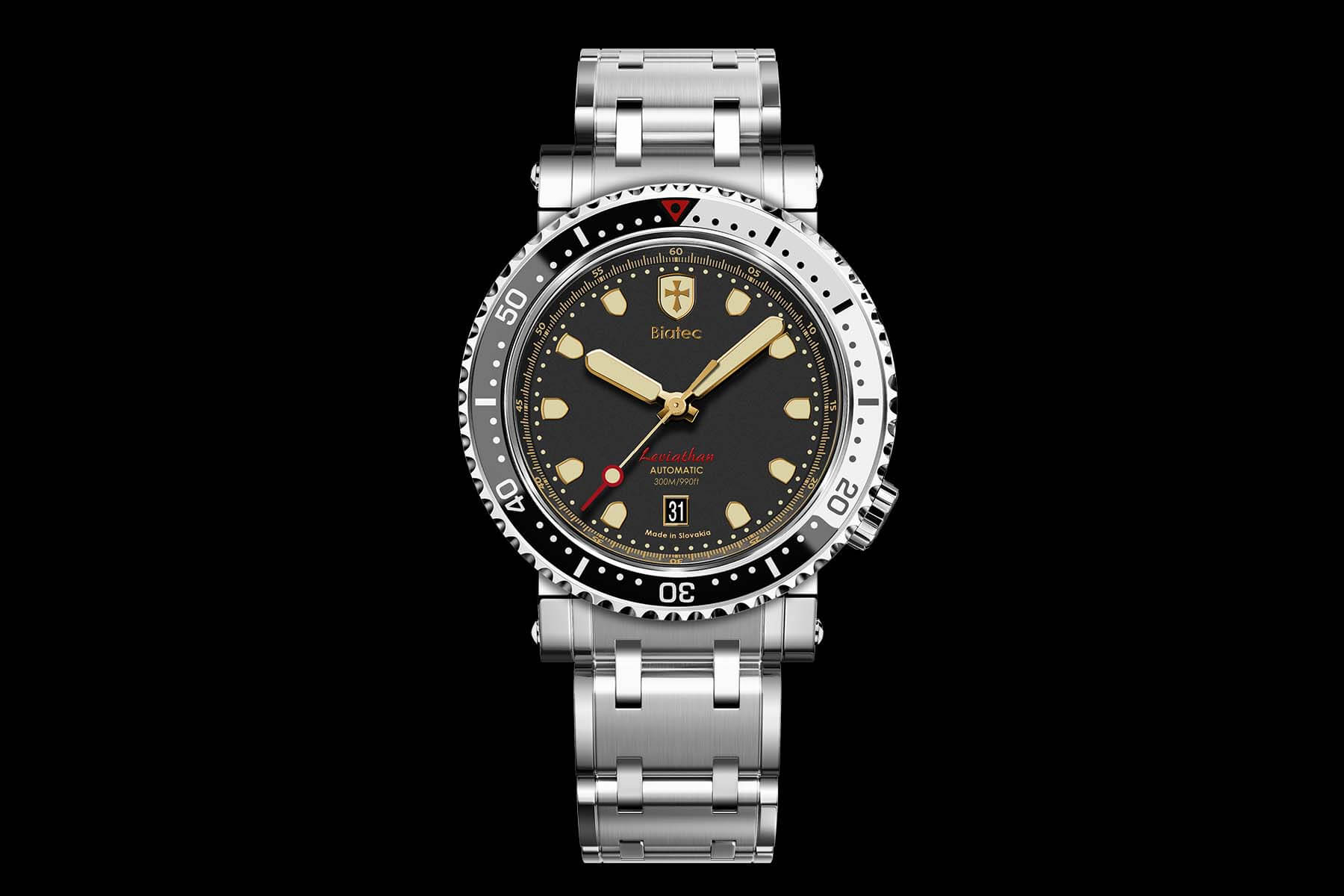 Unusual because from Slovakia. While each of the larger European countries has its own watch making companies, it is not so obvious in the case of small ones. Biatec offers only 4 models of watches, one of which is not yet available for official sale. Individual models of watches from this company, although they differ significantly in style, they share one common denominator; all their watches are beautiful in the same way. I rarely come across watch manufacturing companies that have such a well-established style that is visible in every Biatec model.

In terms of the impression it makes, the Biatec box has broken through all the boxes I’ve had so far. A wide, black cardboard with a thick texture and in it also an wide, laminated black box with a golden logo and golden hinges looks very exclusive. Inside there is a place for the watch itself, it looks like a real trophy. The box is heavy and smells good. The filling in the box is pleasant to the touch and also makes a great impression. 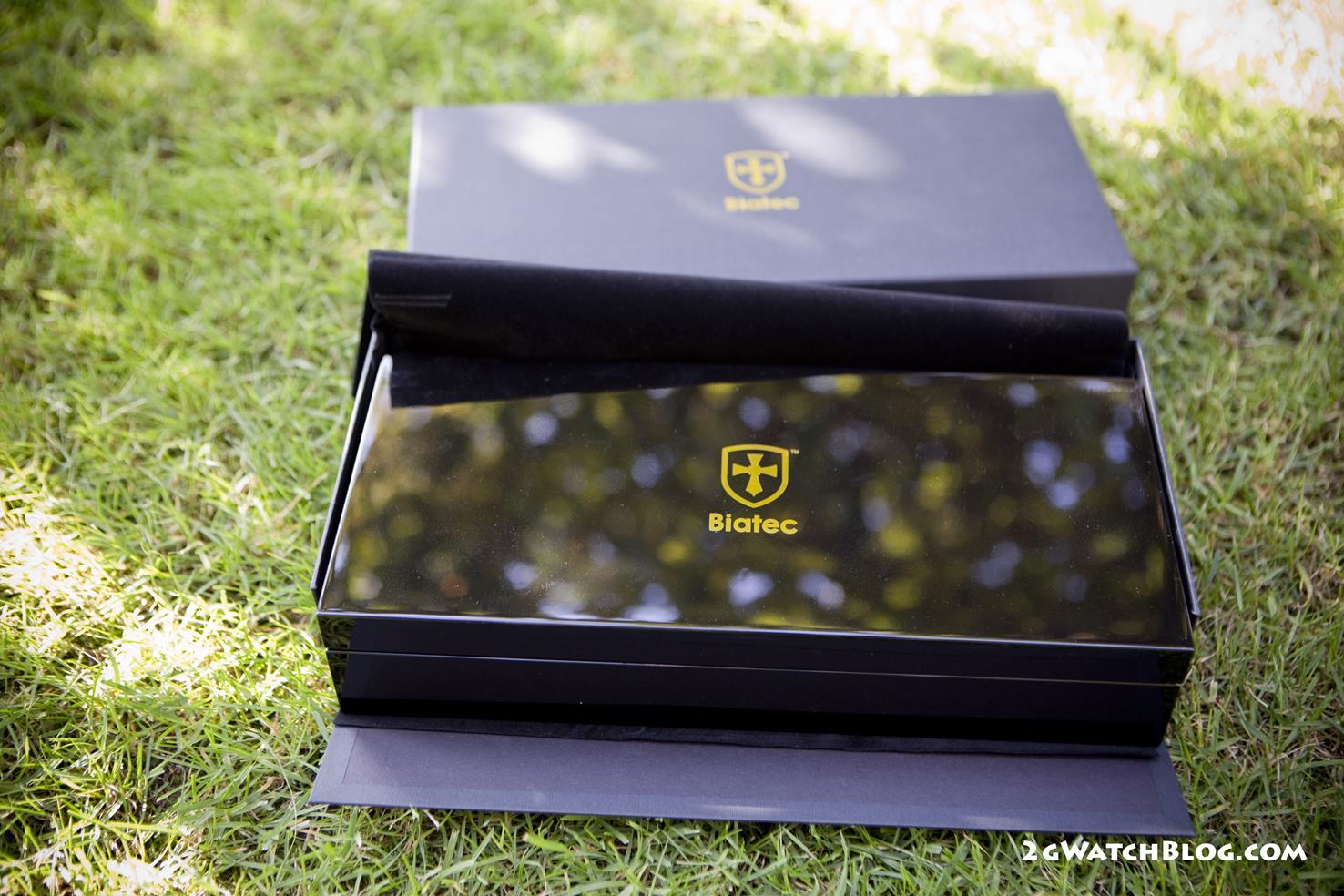 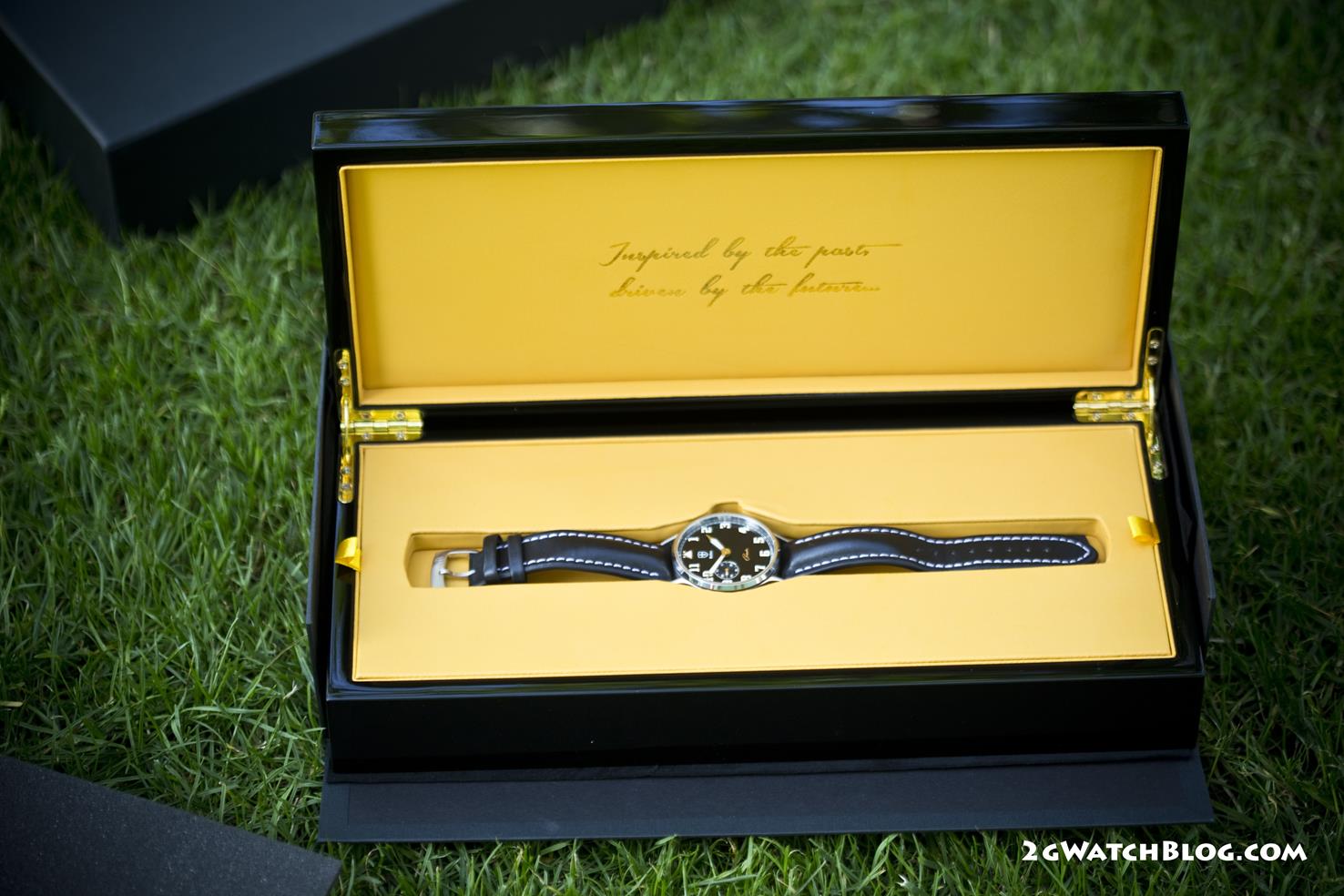 It’s made of stainless steel and is 40mm wide without crown, almost 13mm thick and 48mm long from lug to lug. In theory, the dimensions are very safe, because the 40mm case will fit most wrists, but the first thing that catches the eye is the height of the case. Thirteen millimeters is not terrifying thickness – I had many a thicker watch (even 16mm) – but in this watch, due to the smaller width of the case and the fact how it is designed, it seems unusually large. The sides of the case are completely straight, there are no narrowing, neither from above nor from below, and the fixed bezel narrows only at a slight angle, so it looks quite “blocky”, especially since the watch is worn on a leather strap (bracelet in this case is out of the question). 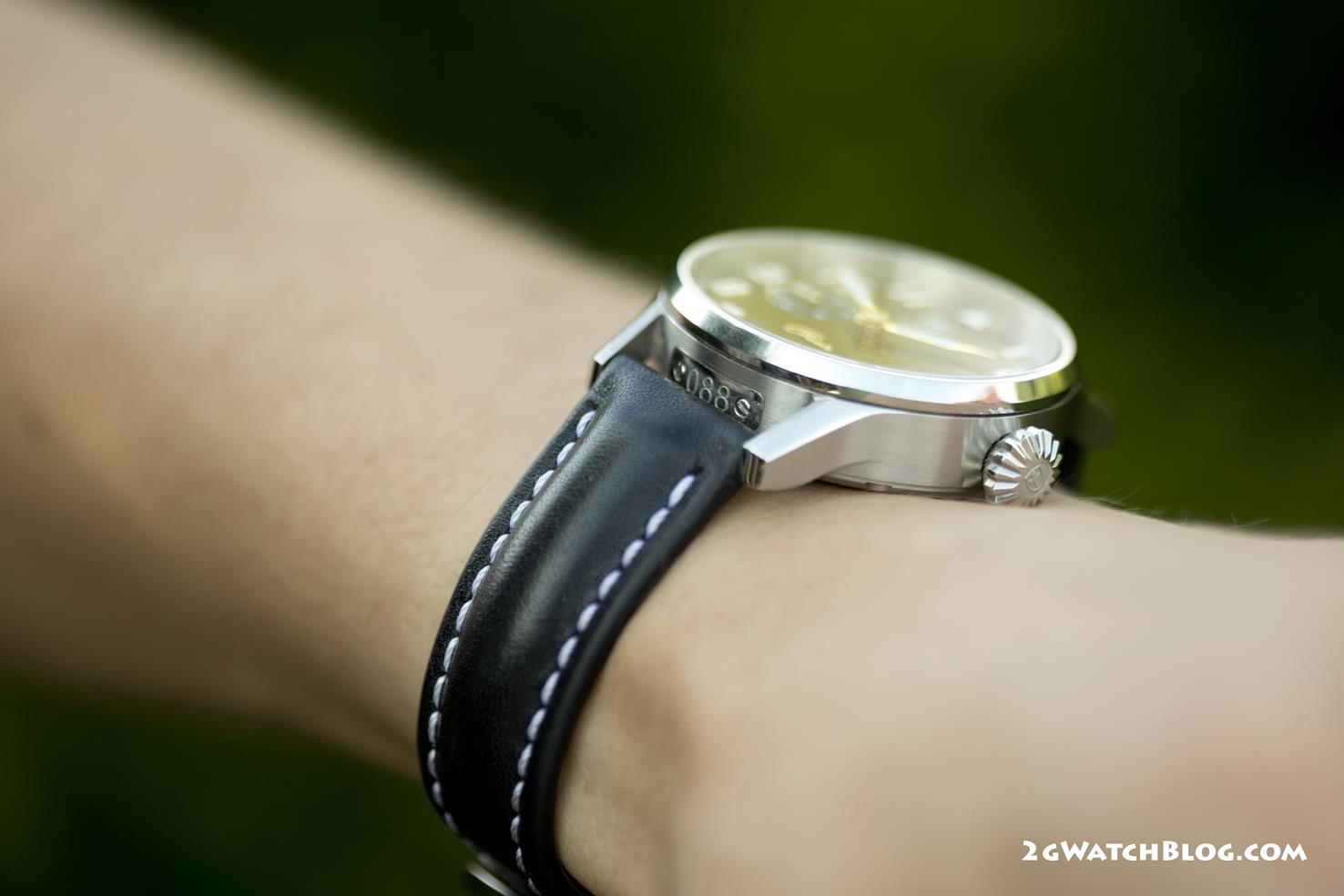 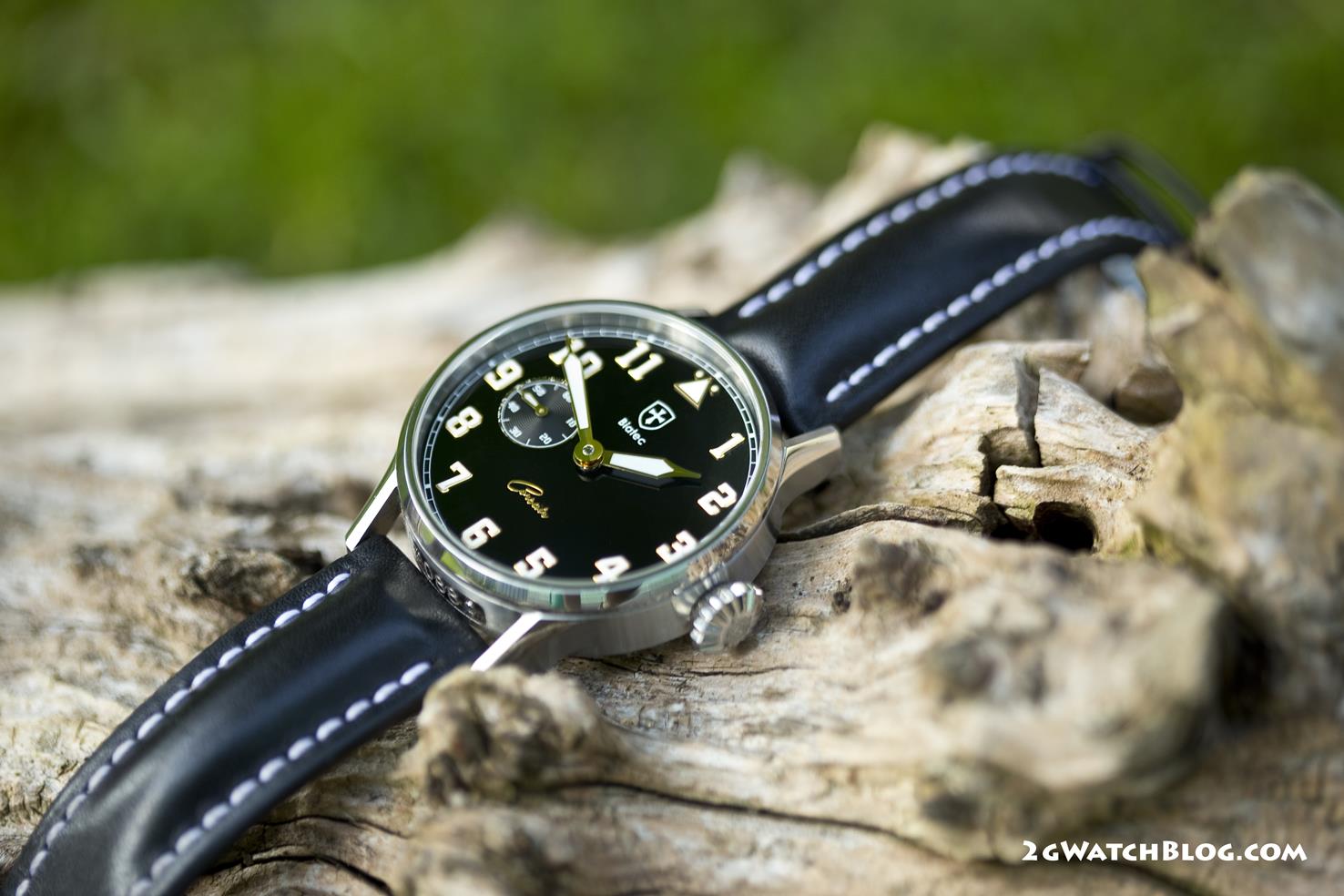 The case itself is made very carefully; the cuts are nice and even – the sides are brushed and the bezel is polished. Between the lugs the watch has a polished badge screwed in with two screws (I don’t know if this is the limit number, I can’t find this information on the manufacturer’s website), it looks very interesting and matches the whole concept of the case. Long, straight lugs are polished from above and brushed on the sides. This is one of the few watches I’ve seen in which the processing between the lugs doesn’t differ in quality from the finish on the sides of the case – this indicates the great care that was put into making the case. 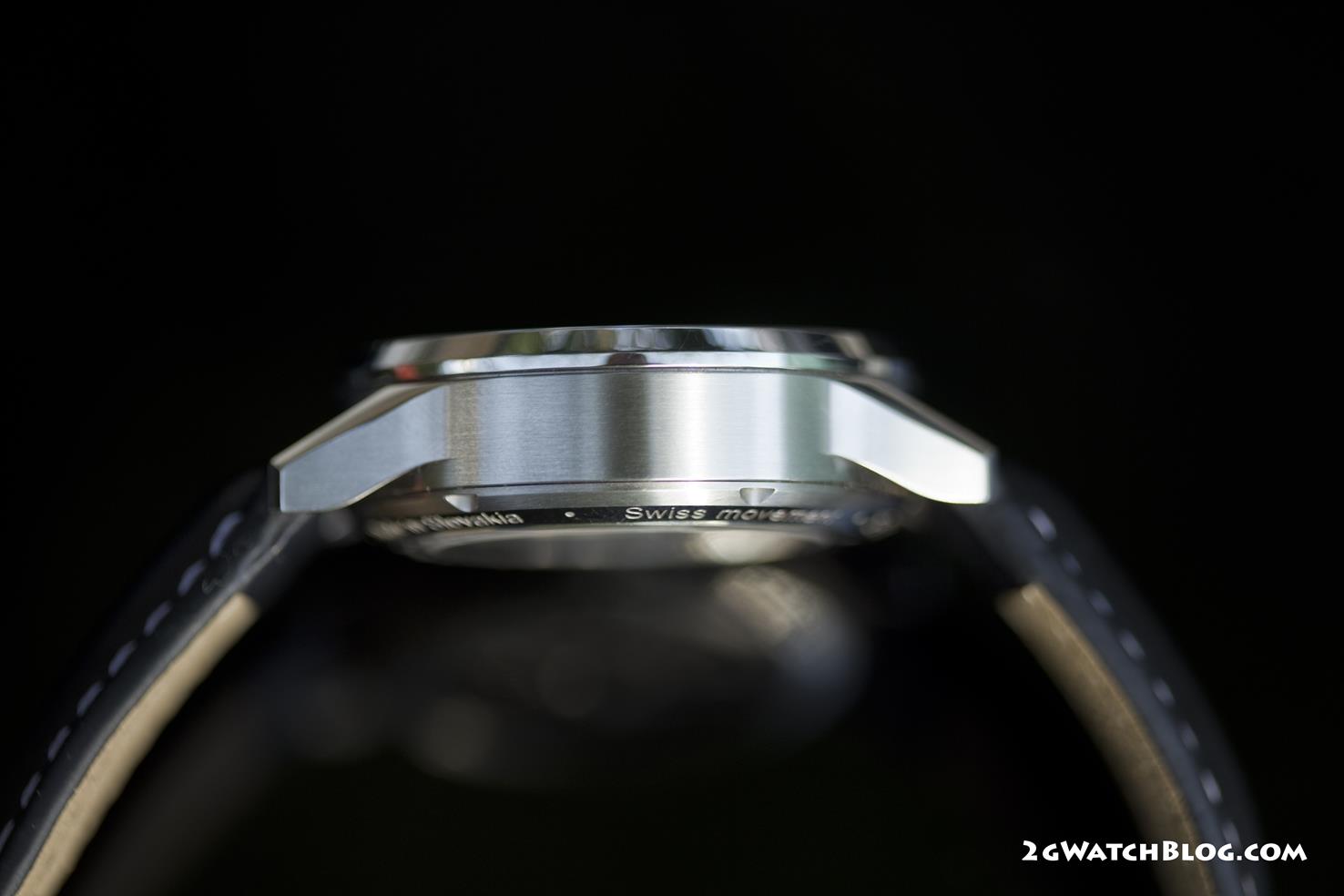 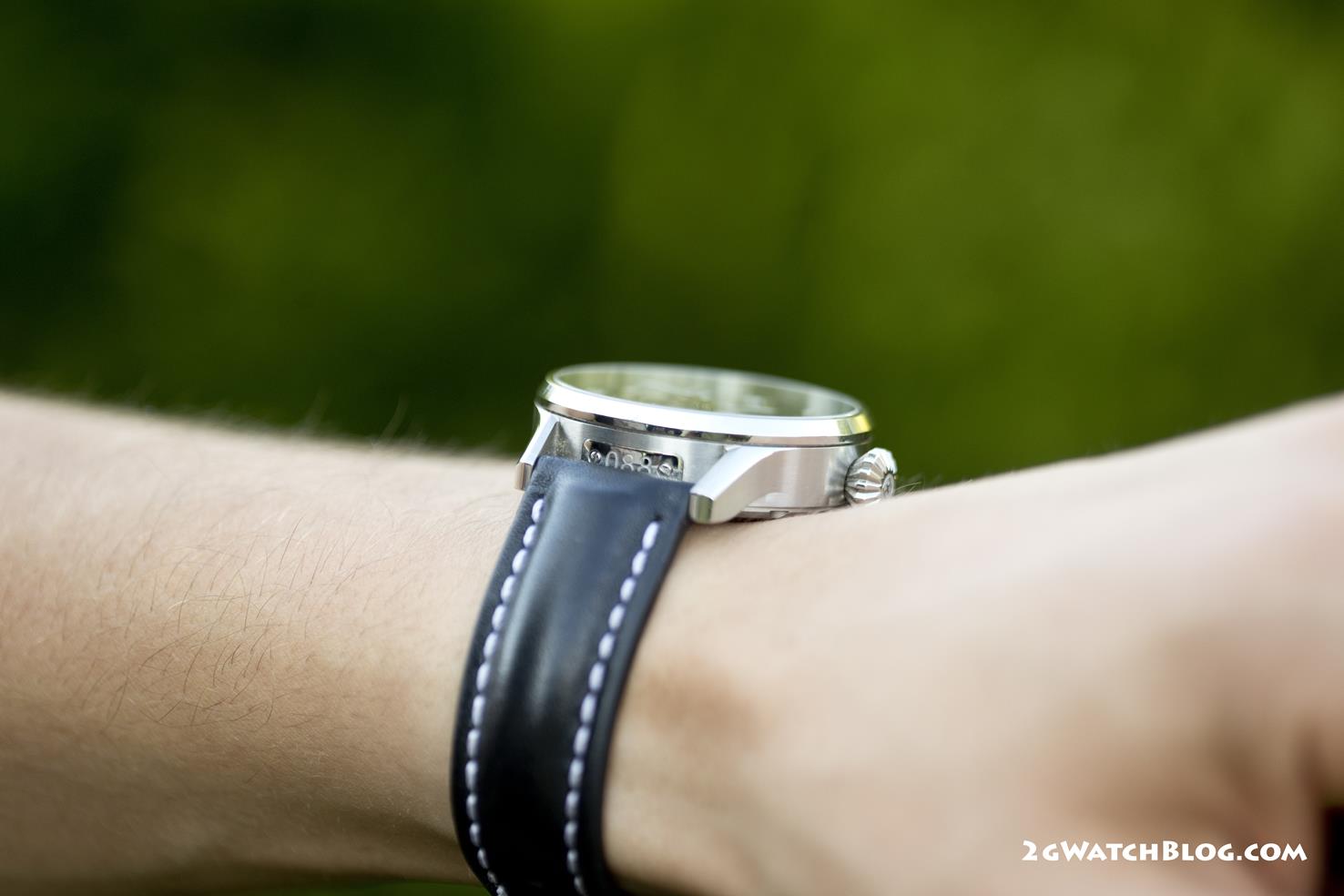 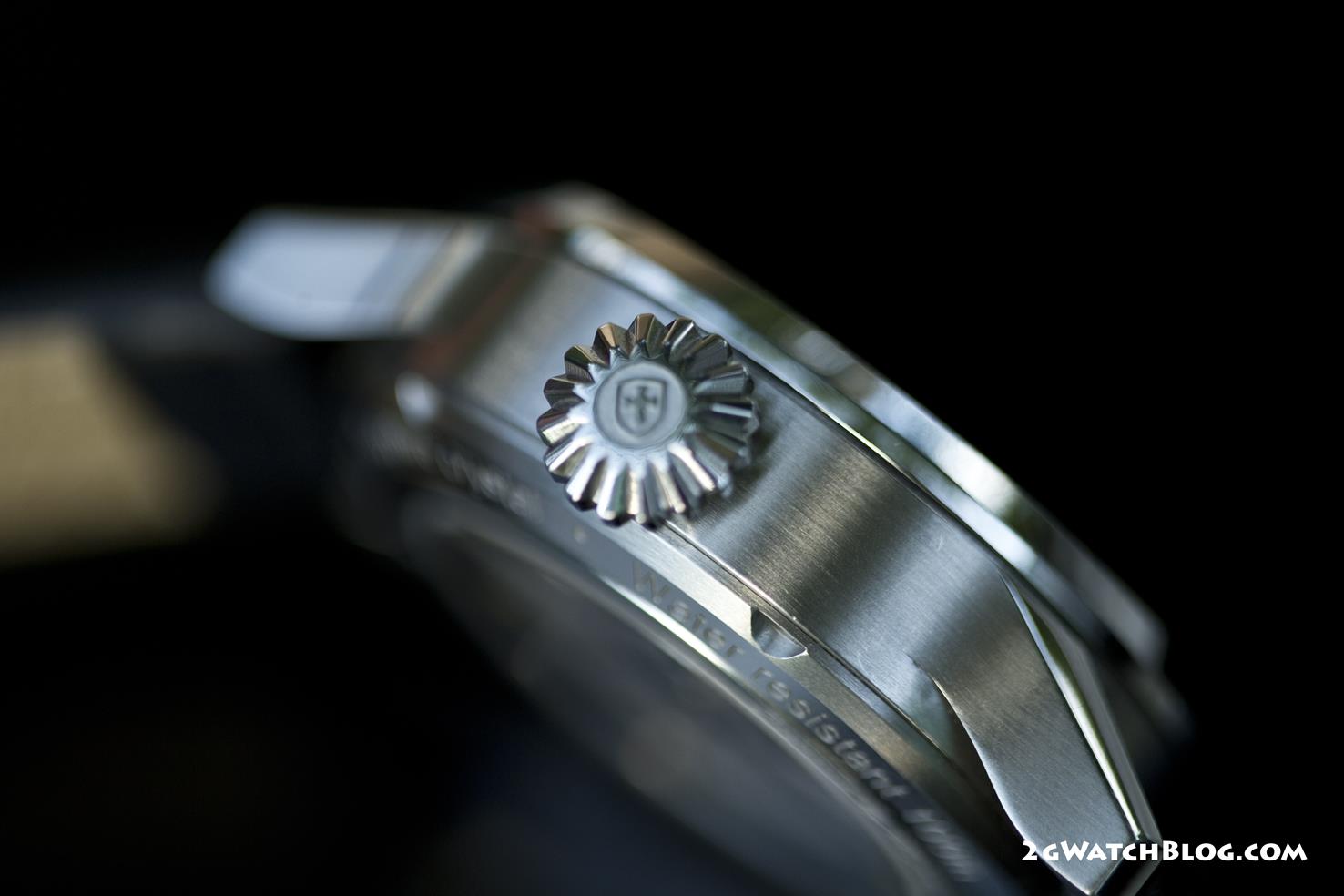 It’s because of these straight lugs that the watch lies tragically on my wrist. I had the same problem with the Vratislavia Conceptum Pro Militari and Epos 3390 watch – the case is not too big but the shape of the lugs causes the watch to fit itself in the upper part of my wrist and the lugs stick out from above. This is also associated with poor wearing comfort, especially for strap watches. Watches with such lugs are simply not for me and after a few hours of wearing them, the first thing I think about when I get home is to “remove the watch”. 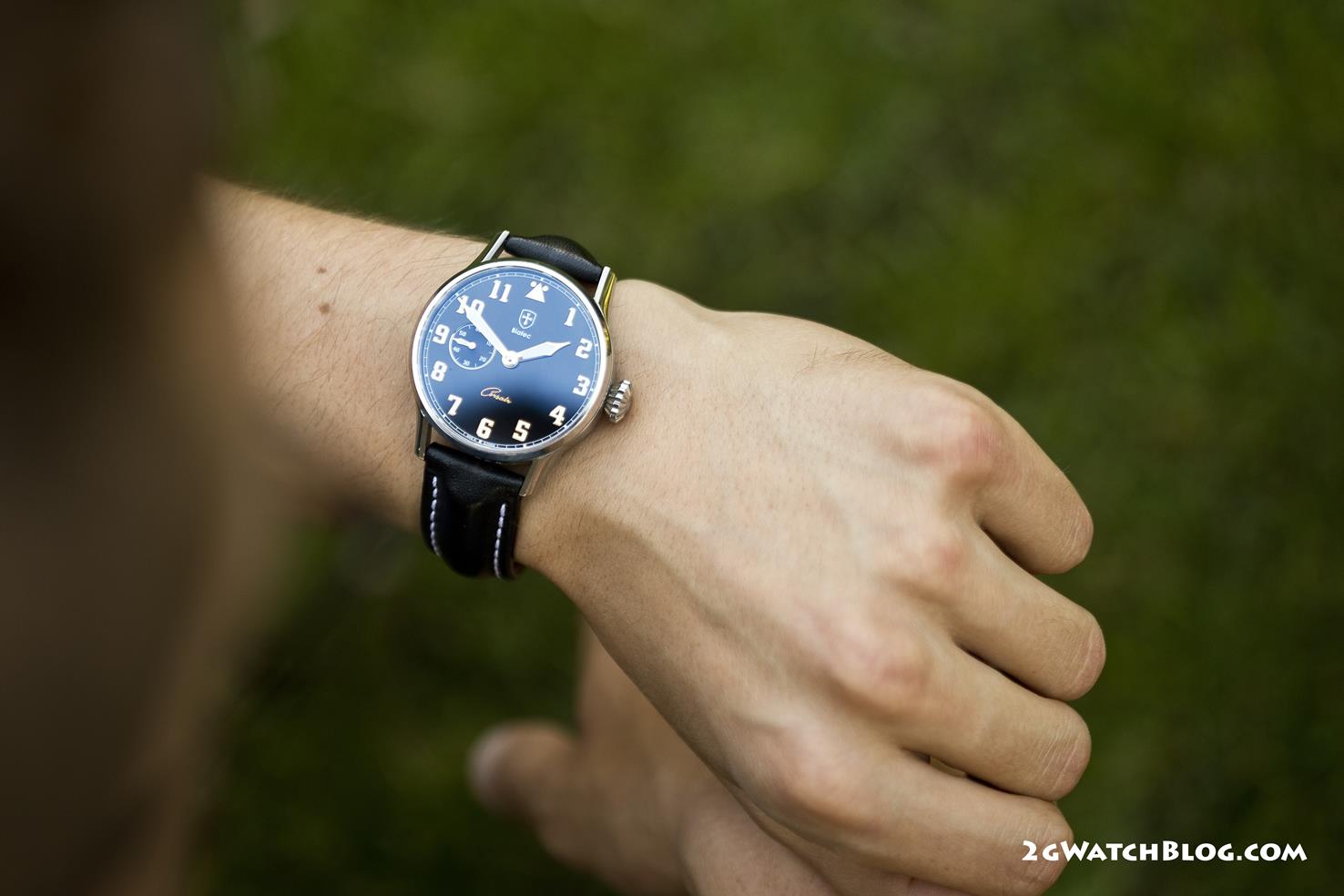 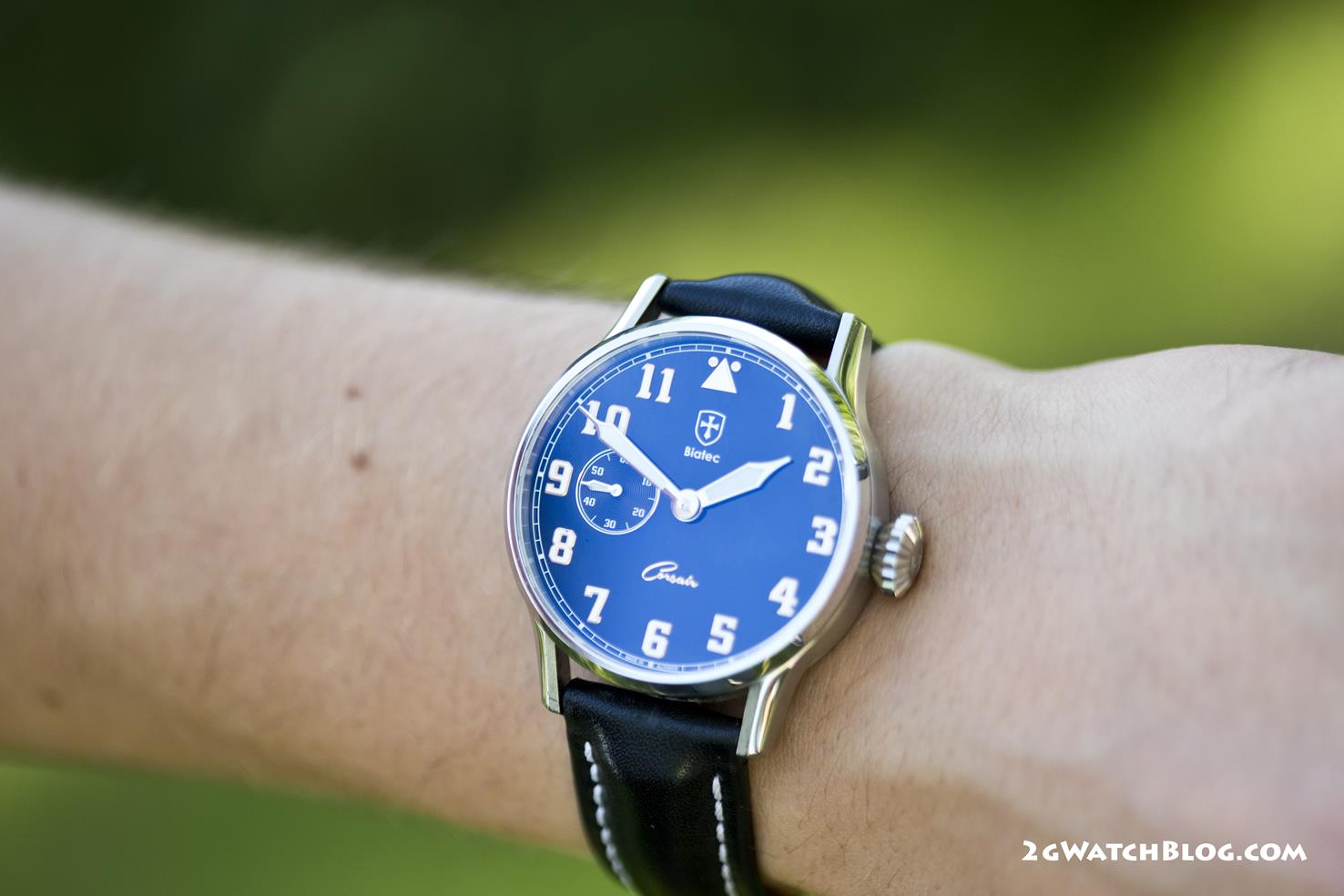 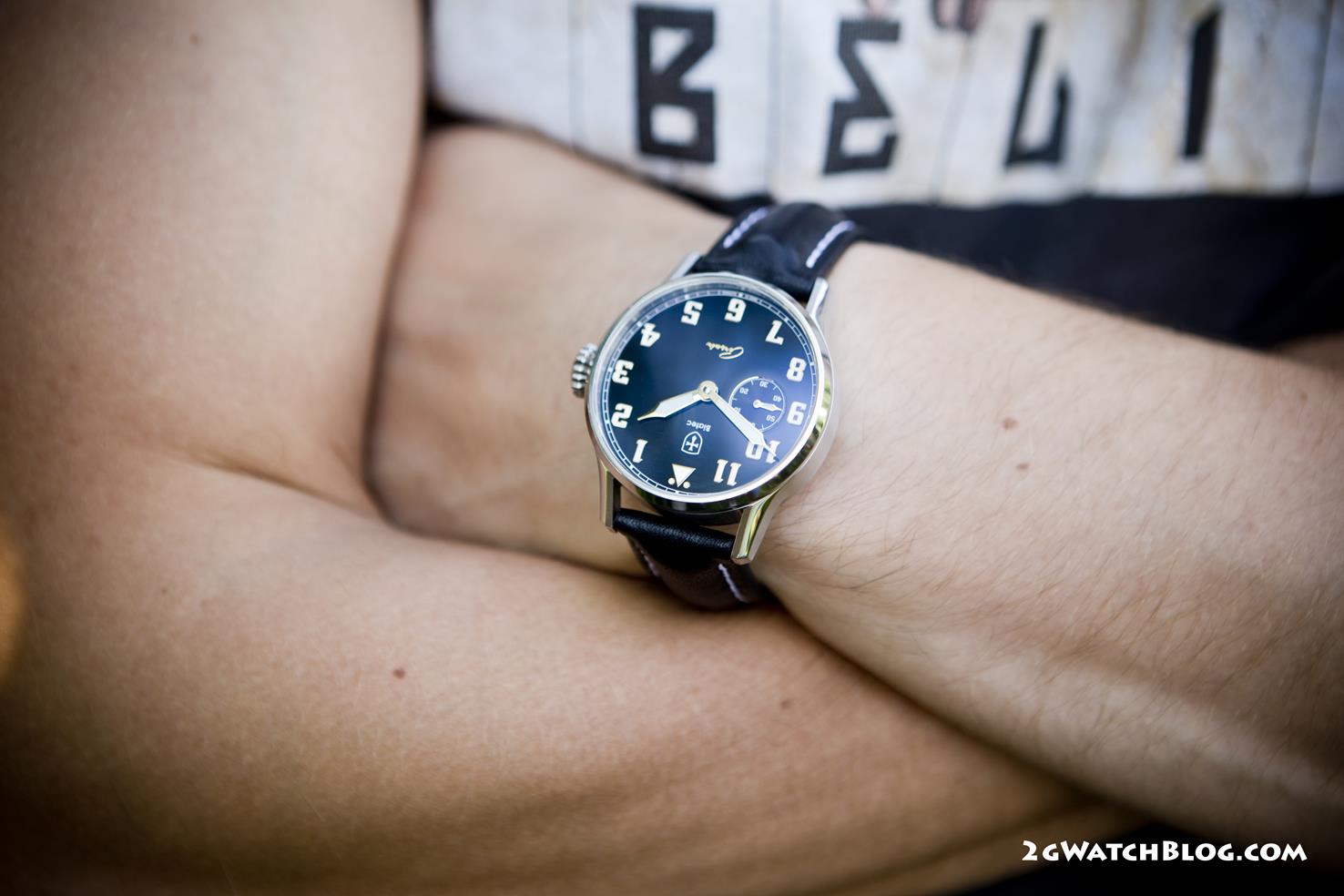 The diamond-shaped screwed crown is very large and has an engraved company logo on the tip – the logo is very clear and deeply engraved in metal for the crown . It is very easy to operate and sets the time without any problems. The watch has a water resistance of 100m so you can swim with it without obstacles and what is important for me – wash under running water (I often do this with WR watches over 100m, especially in the summer when the hand sweats heavily and more dust floats in the air). 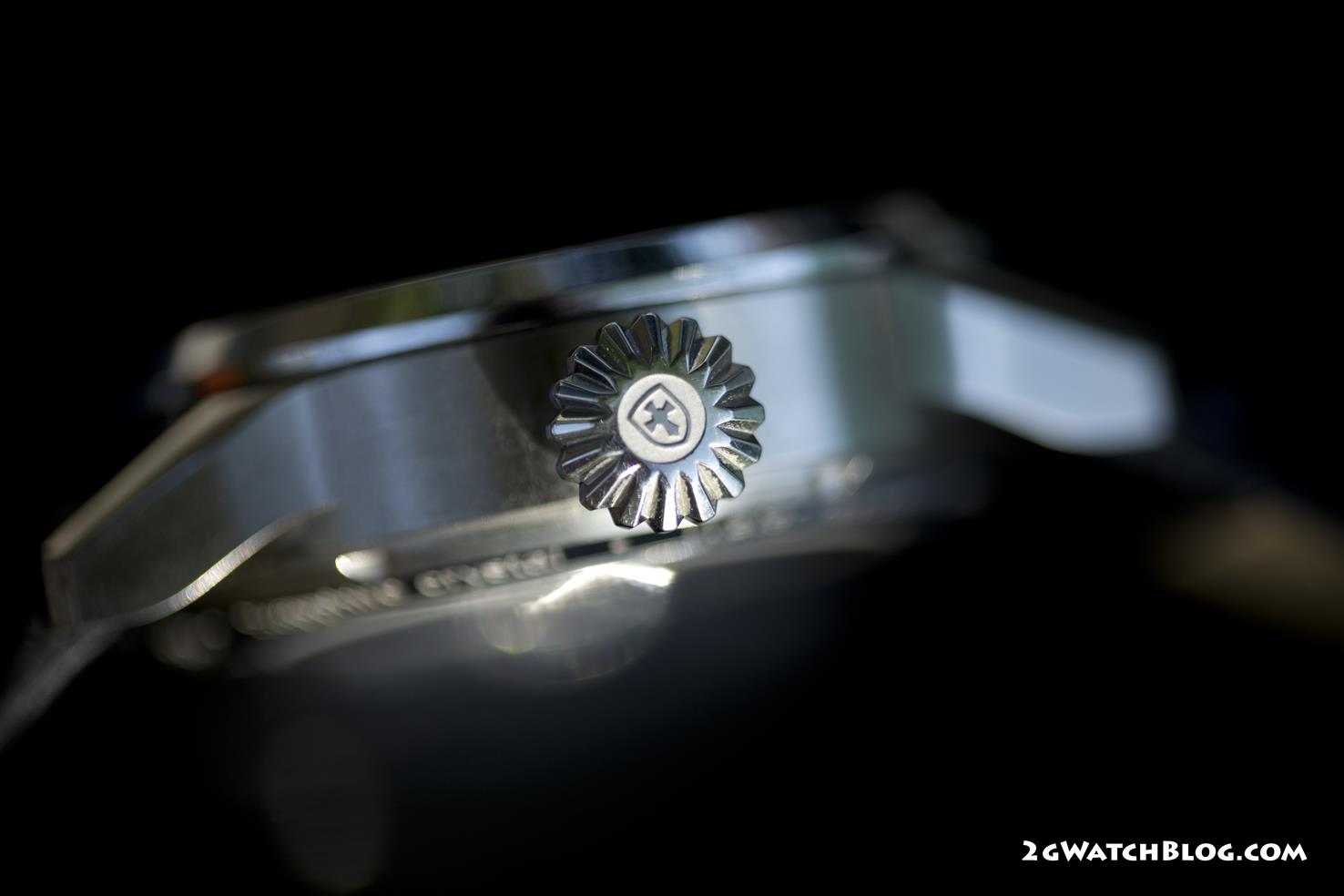 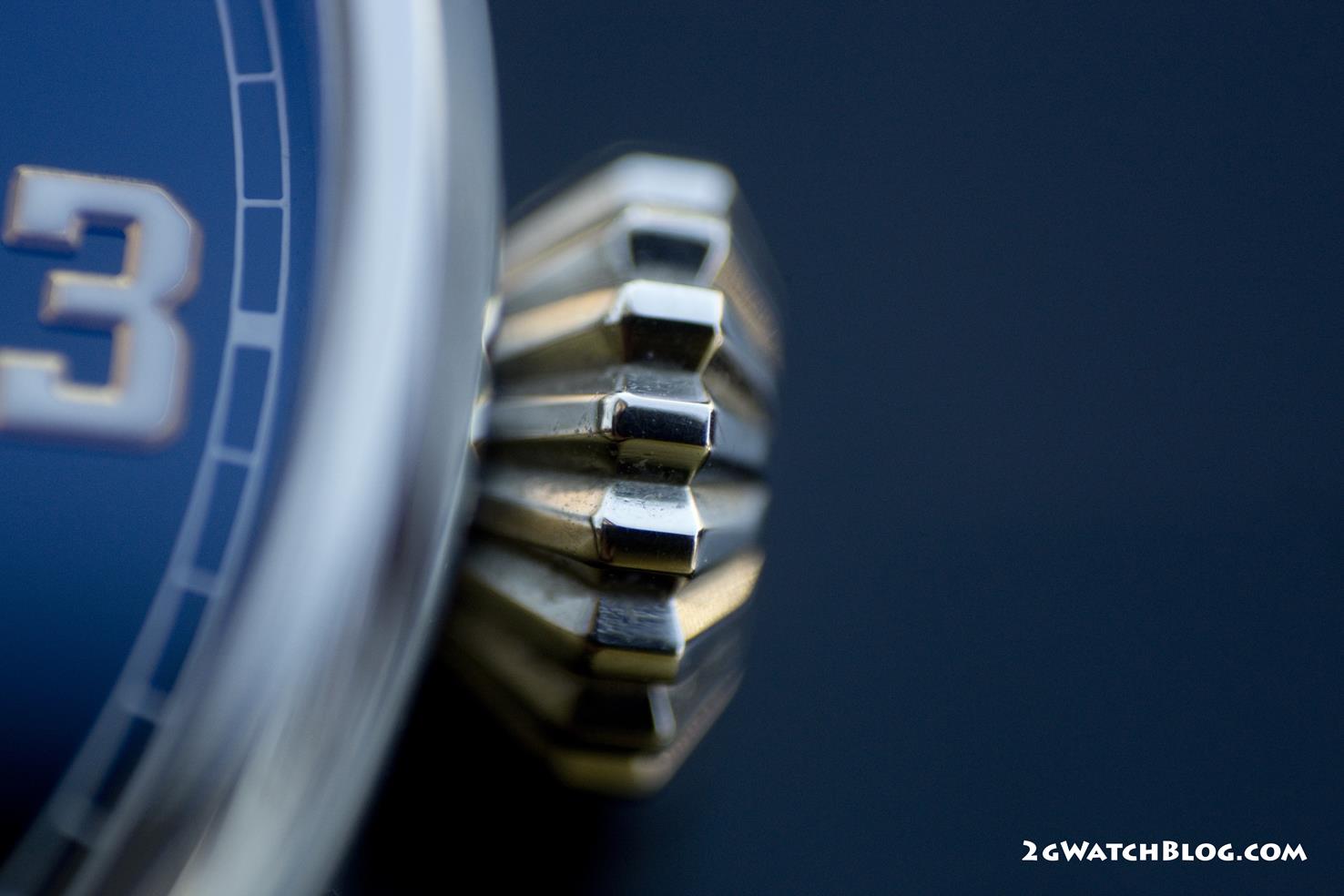 And here it’s very unusual … the watch uses the movement Eterna 3901a. Biatec didn’t go the easy way, and instead of the standard movements used by microbrands, ETA o Sellita, they got along with Eterna and used their inhaus movement with a 65-hour power reserve. This solution has its advantages, if you put it on a Friday evening in a box with a fully charged  spring, on Monday morning putting it back on your hand, it will still work and you will not have to set it up. The cost of this is the thickness of this movement, it probably stands mainly behind the height of the case in this watch. The movement operates at a frequency of 28 800 vibrations per hour, has a stop second and the possibility of winding from the crown. My copy makes an average of +6 seconds per day which I consider a satisfactory result. The use of this movement in this watch, despite the fact that it thickens the case, I consider as a huge plus, because it significantly distinguishes this model from the mass of microbrand watches available on the market. 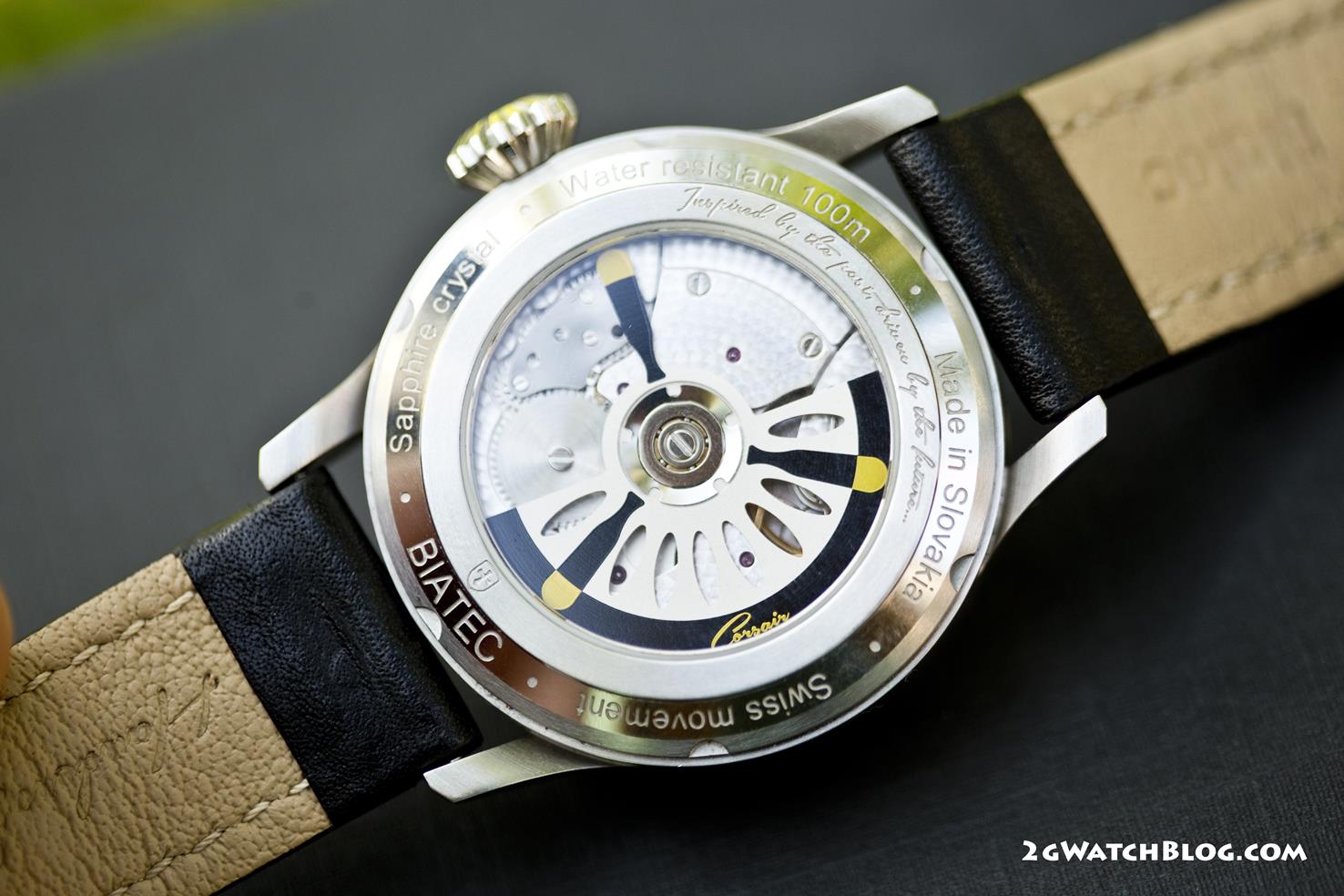 So we move from the element that is most characteristic in Biatec watches. The black dial is juicy and glossy as if the paint was applied to it many times. The sapphire glass that covers the watch from above has a double anti-reflection (internal and external) which in combination with the dial gives amazing visual effects. Thanks to this, the watch looks very exclusive, and even a layman will notice at first glance that it is a premium product. 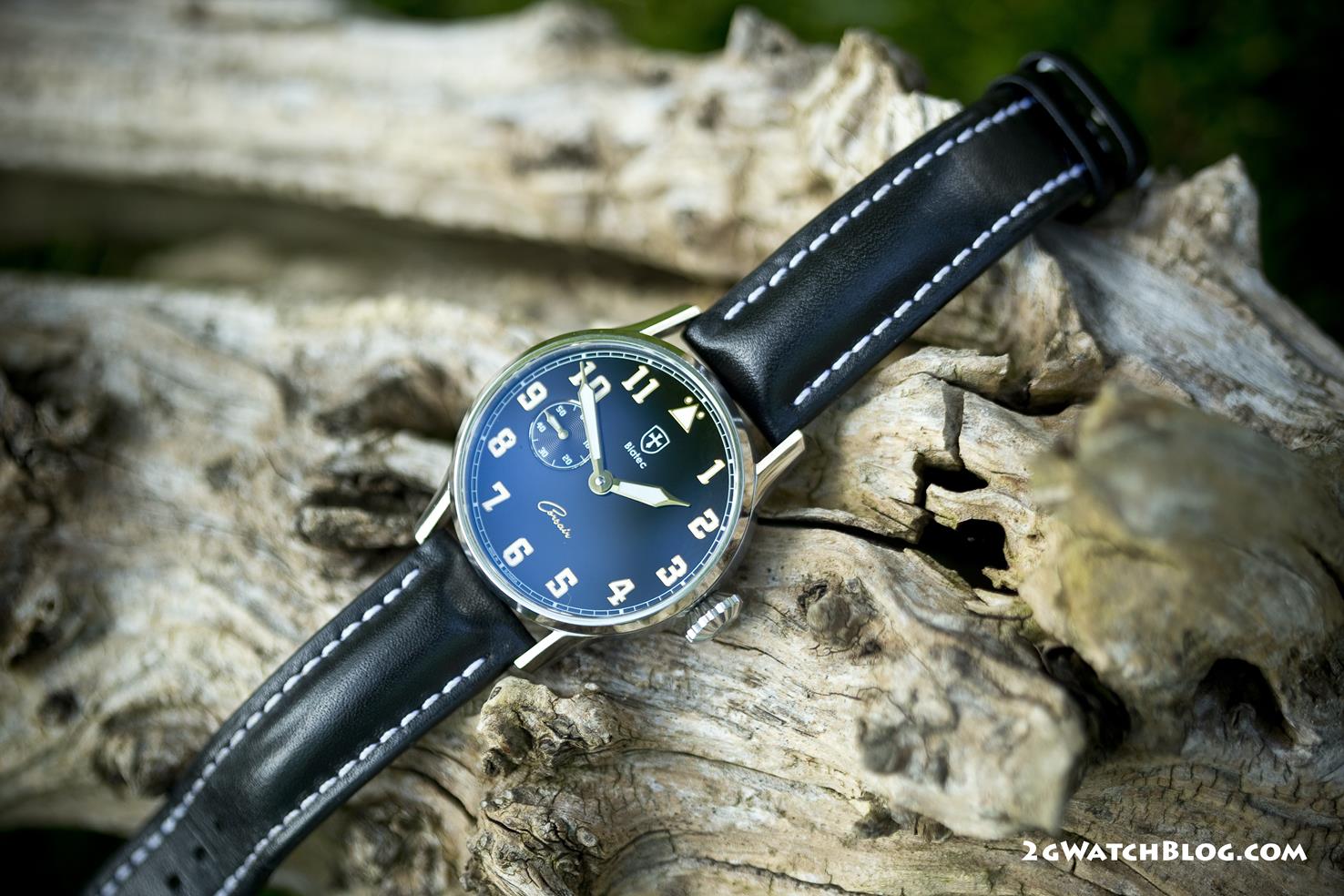 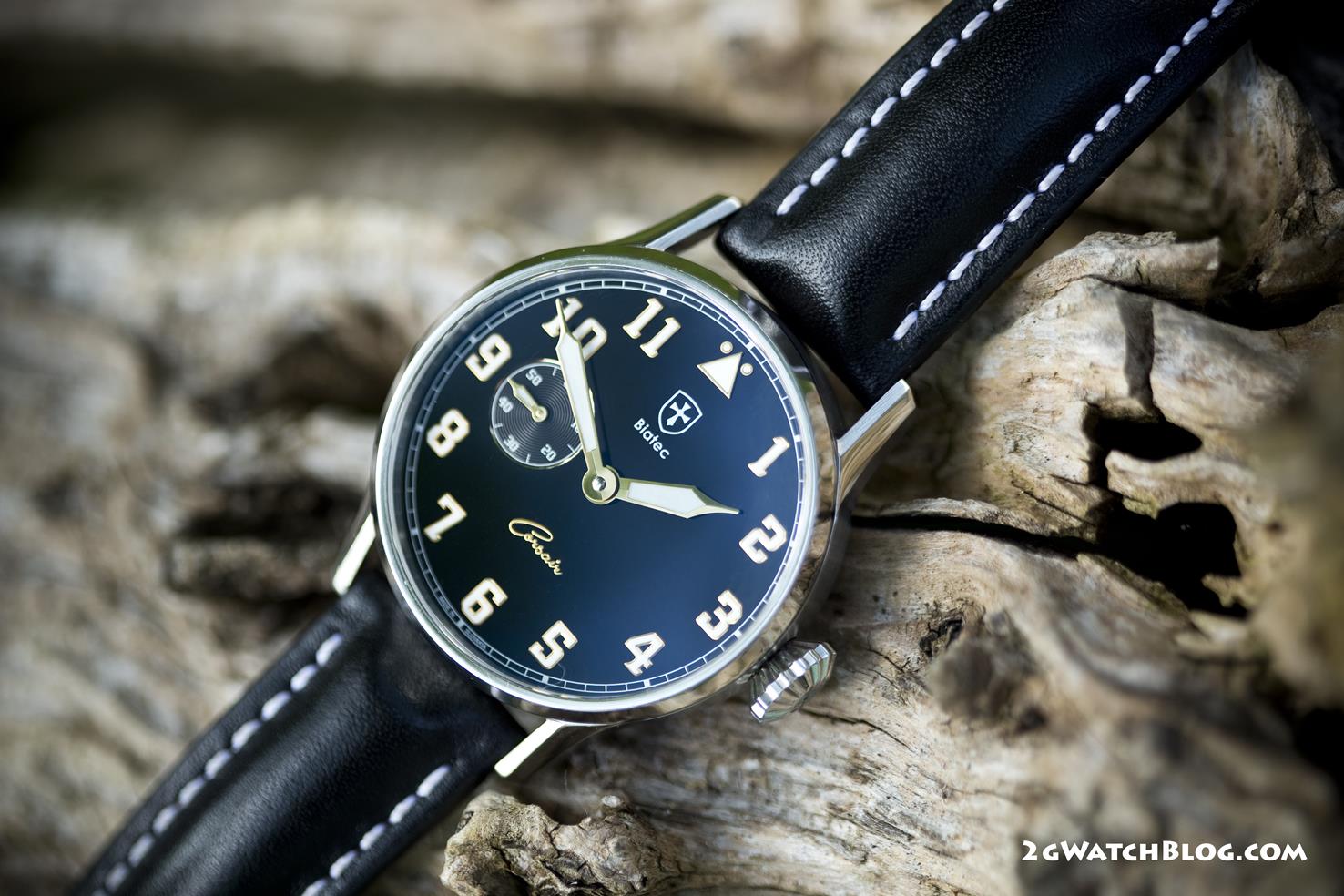 Double anti-reflection is another bold step taken for this model. Rarely does a watch manufacturer decide to use an external anti-reflective coating on glass, because there are opinions that such a coating easily scratches … and this is partly true – such a coating can scratch, but it’s not as easy as people think. In addition, even if the glass will have a few more scratches on the coating in a several (tens?) Years, it can simply be polished completely. In the worst case, we will have a watch like hundreds of others, i.e. only with internal anti-reflection. At the moment, however, you can enjoy the great transparency of the glass and the interesting appearance of the dialfrom different angles. 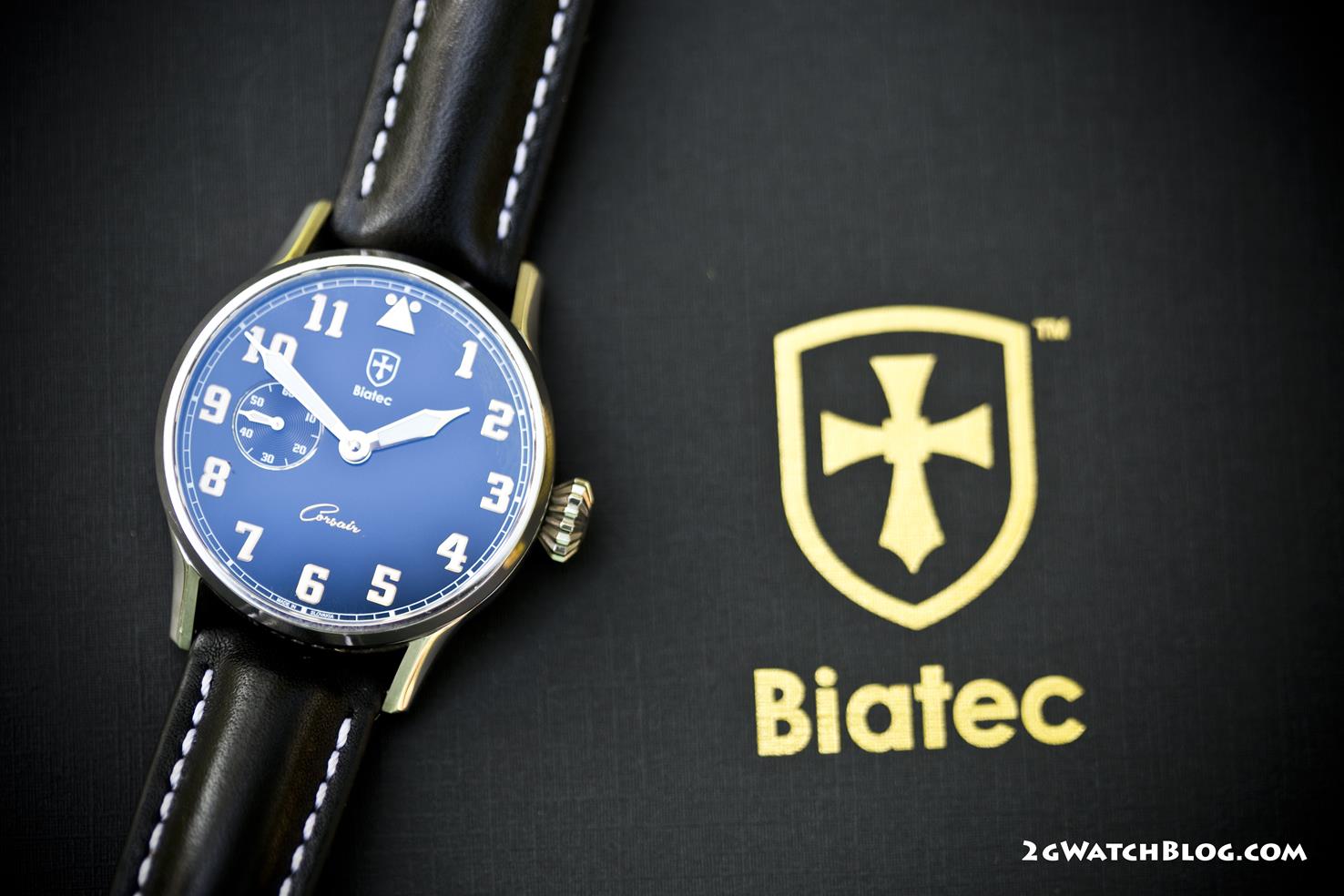 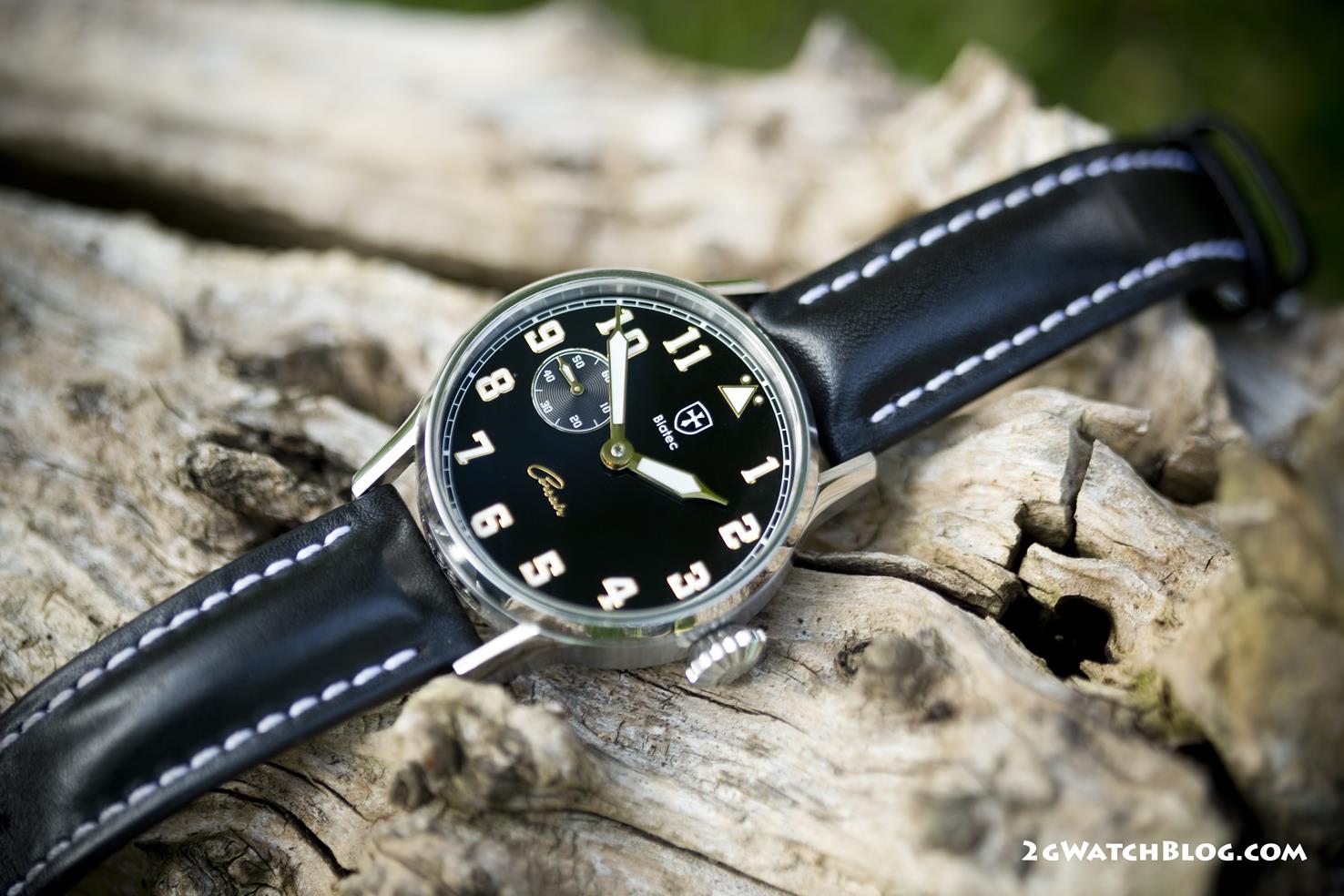 The Corsair model style refers to pilot watches, so, as befits a pilot, it has large indices in the form of Arabic numerals. In this case, the indices have golden frames, inside filled with BGW-9 luminescent mass which glows blue in the dark. The indices are applied, stand out nicely from the dial and are perfectly made. The 12 o’clock index, like most pilots, is a triangle with two dots next to the top apex. Below index 12 is the manufacturer’s logo painted in white paint, while at the bottom of the dial we will find a golden inscription with the name of the model – “Corsair”. On the completely outer part of the dial is a minute scale that reminds you of railroad tracks. 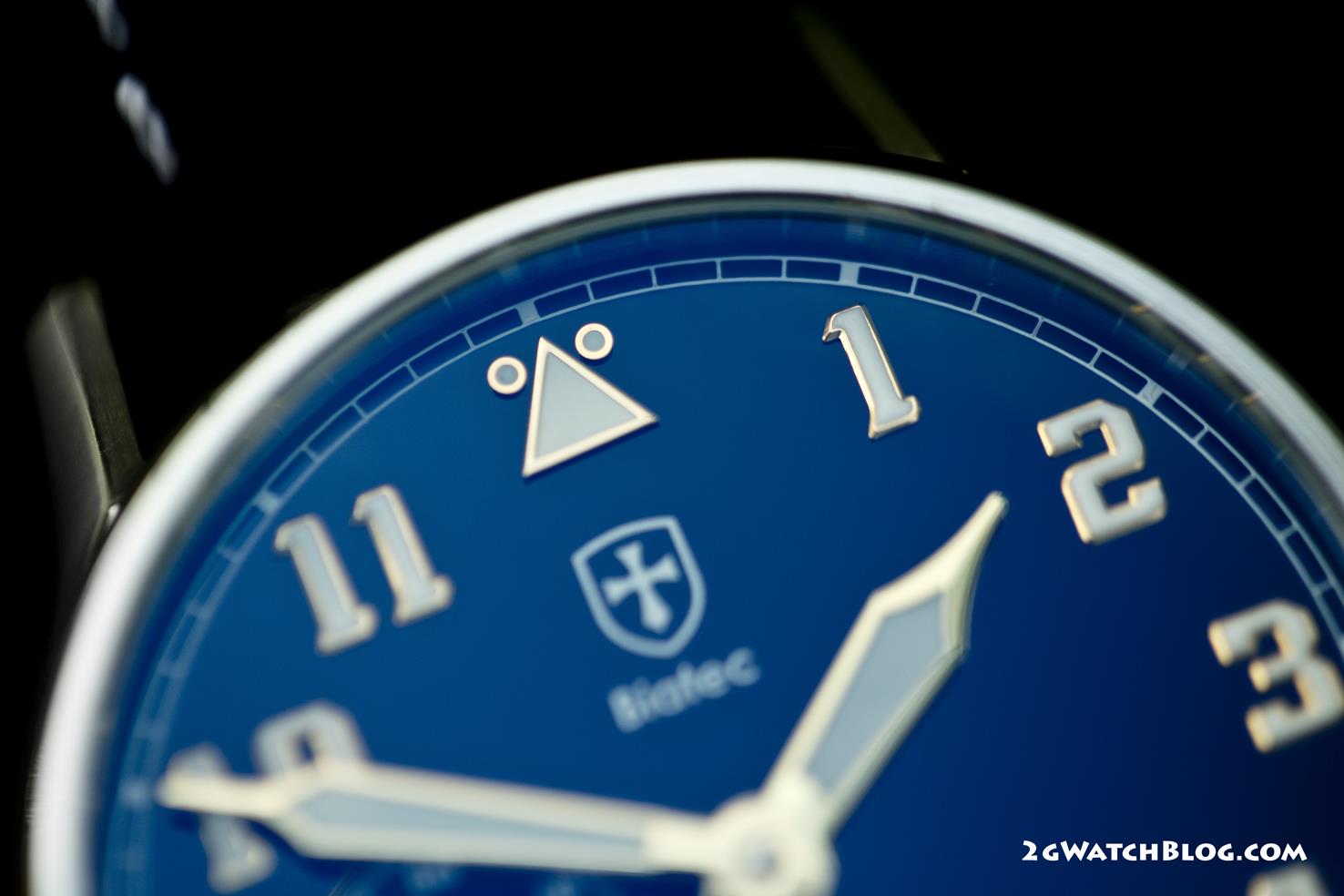 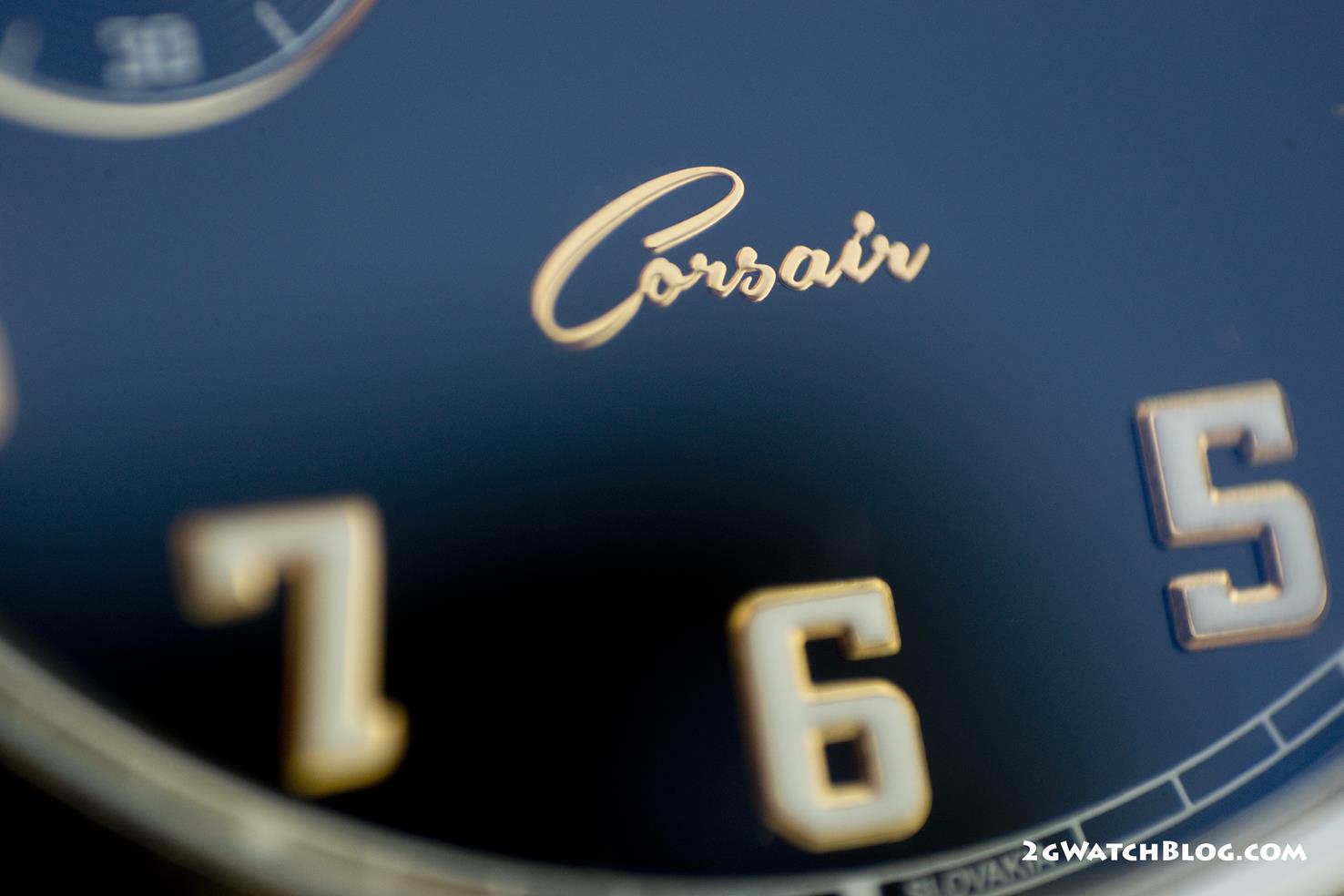 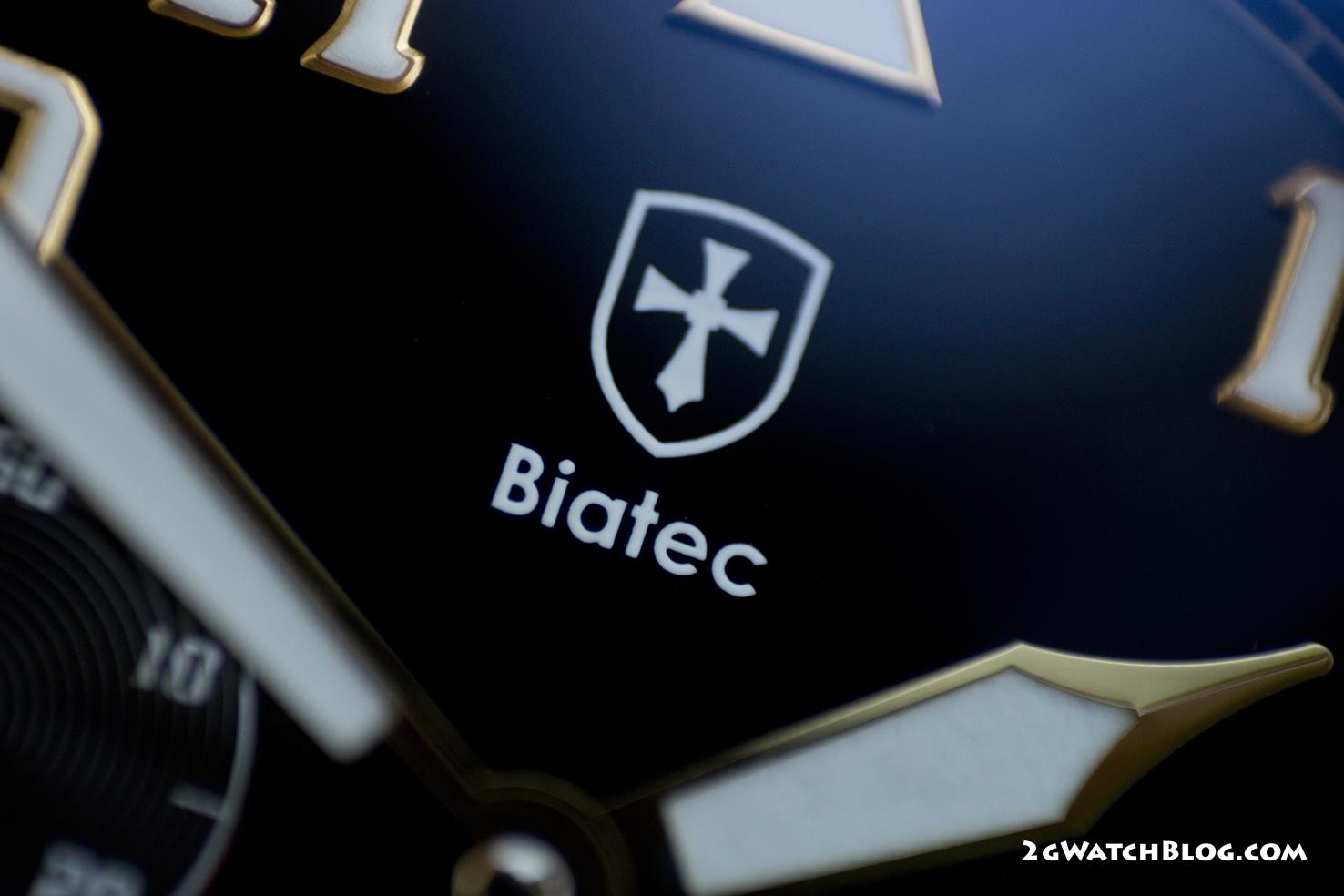 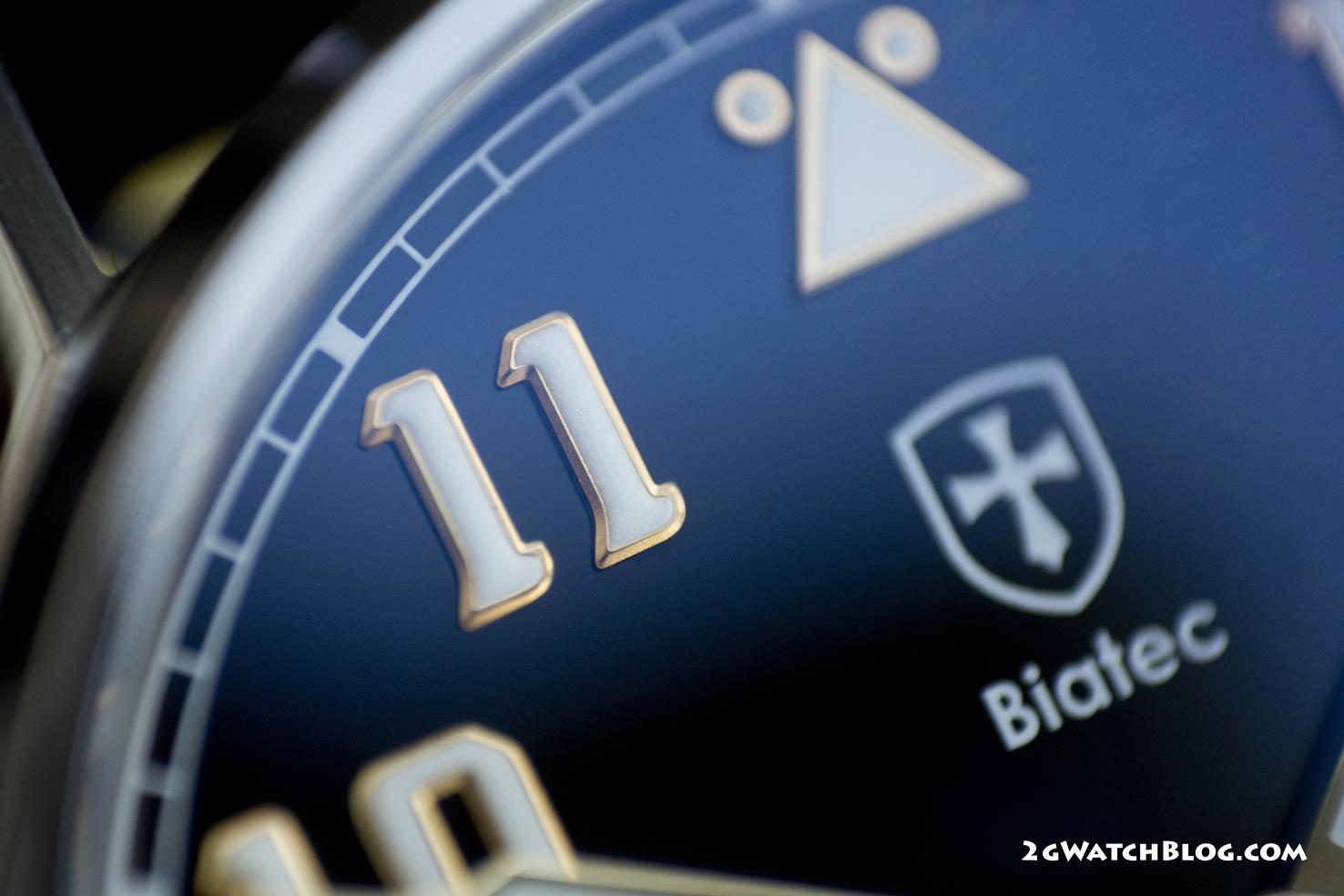 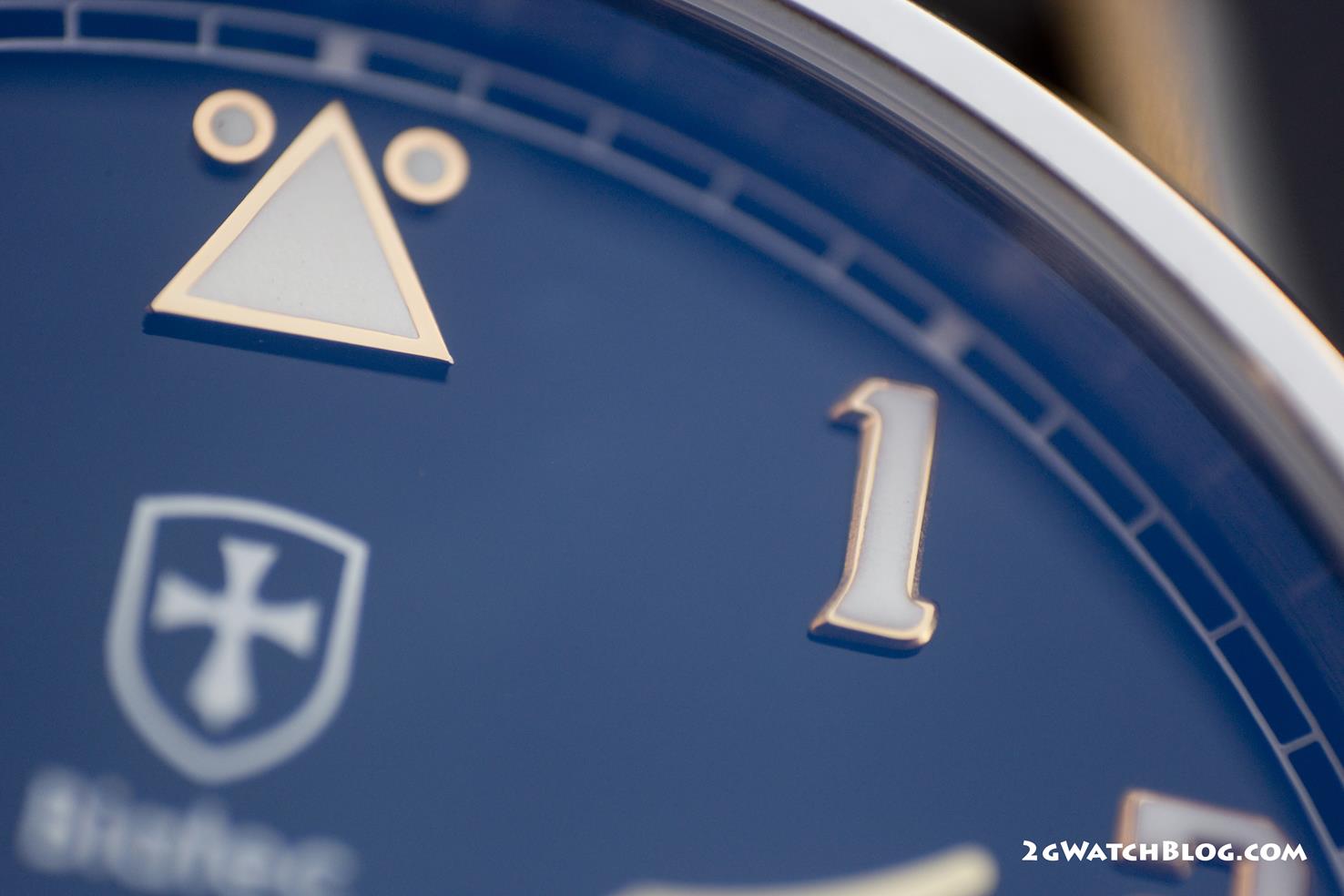 The version that was lent to me has a small second in the left part of the dial – the second hand subdial is located in the hollow of the dial and has round corrugations. On its outskirts there are seconds indices. Despite the fact that it has relatively many elements, the dial still looks clean and legible, i.e. as it should be in the case of a pilot watch. 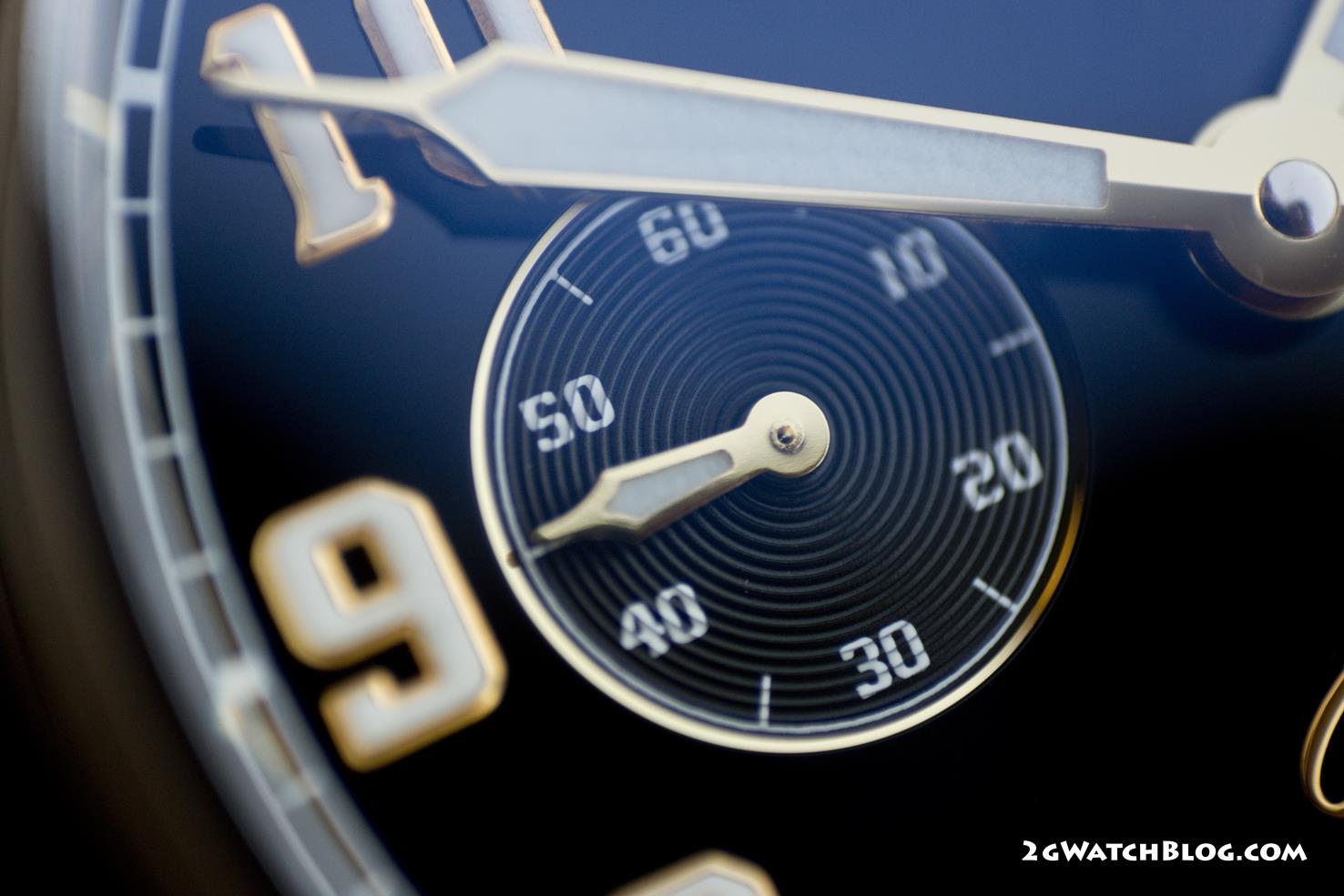 The hands are also golden and remind me of the hands of large clocks located in churches and town halls. Just like the indices inside, they are filled with BGW-9 luminescent mass glowing blue. And since we’re at the lumie, the watch glows decently in the dark, the manufacturer didn’t save on the amount of weight, but as I mention in reviews every time on the occasion of this luma color – it weakens faster than green luma and doesn’t give such an effect. 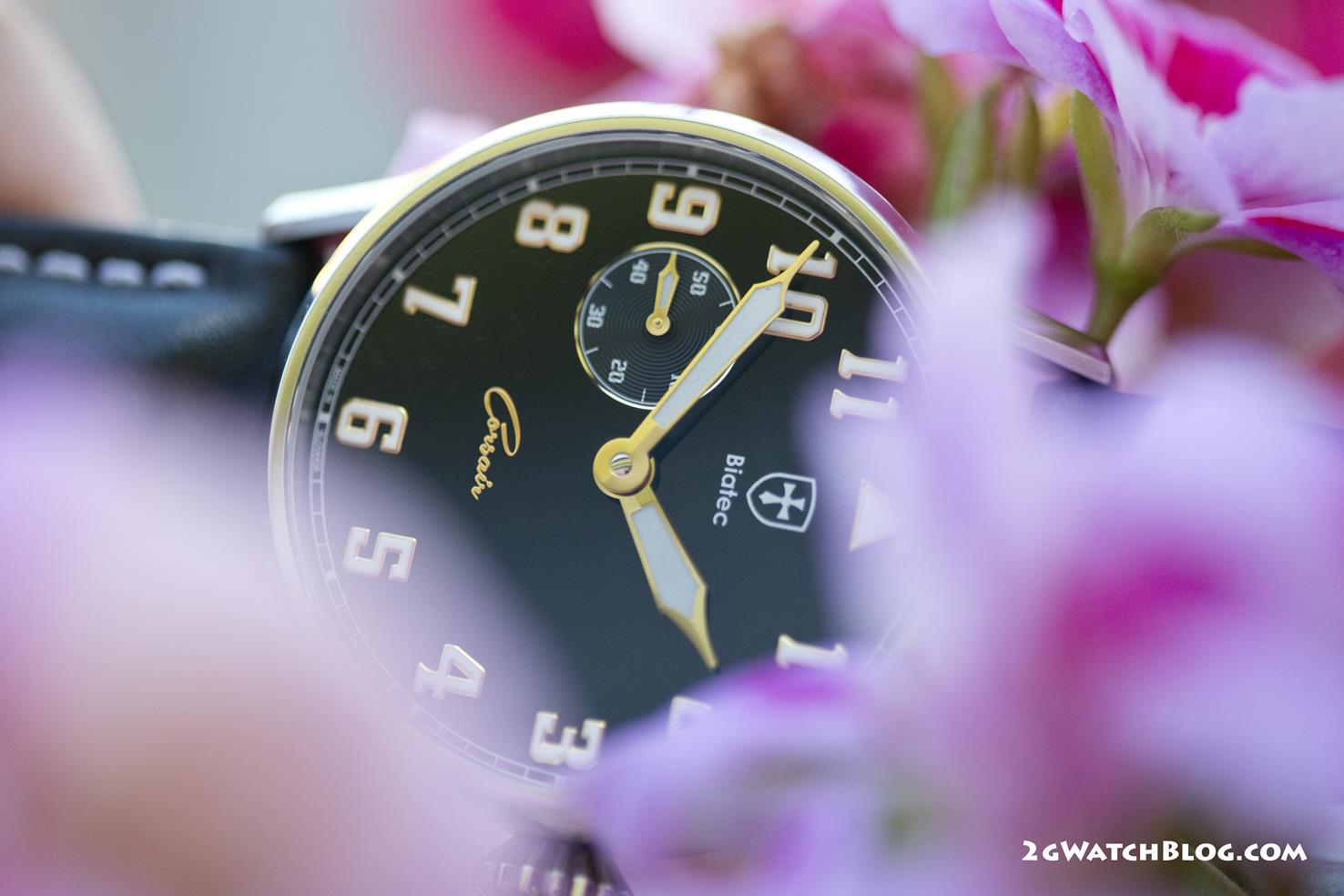 The dial is definitely the strongest point of this watch, all its elements from indices, hands to inscriptions are very juicy and clear … it beats amazing quality of performance that we can only see in watches from the higher price range. It makes you look at it for a long time to realize after a while that you forgot to check the hour… 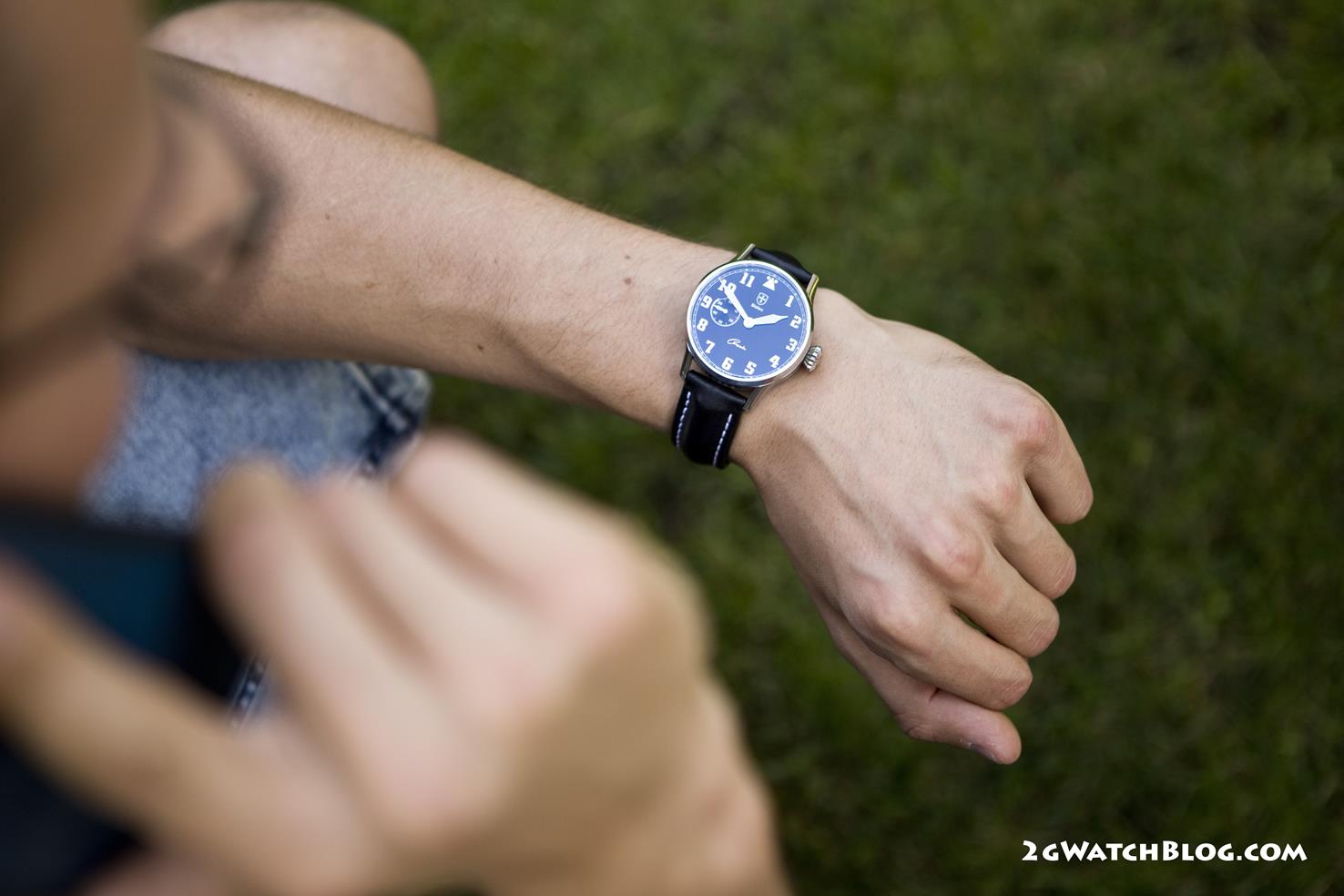 The screw down case back is a steel circle with sapphire glass inside. On the steel element there is information about the watch and through the glass you can see the working movement and the rotor that was designed specifically for this watch. The rotorhas the image and partly the shape of the aircraft’s propellers and is an additional flavor of this model that perfectly fits into the whole vibe. I really respect this manufacturer for refining even such an element as the rotor, I think that if the watch has an automatic movement and a see thru case back, this is how it should look. The movement itself is decorated, and pearly bridges, but as it is in the case of automatic movements, there is not much to look at – but we have an interesting rotor 😊 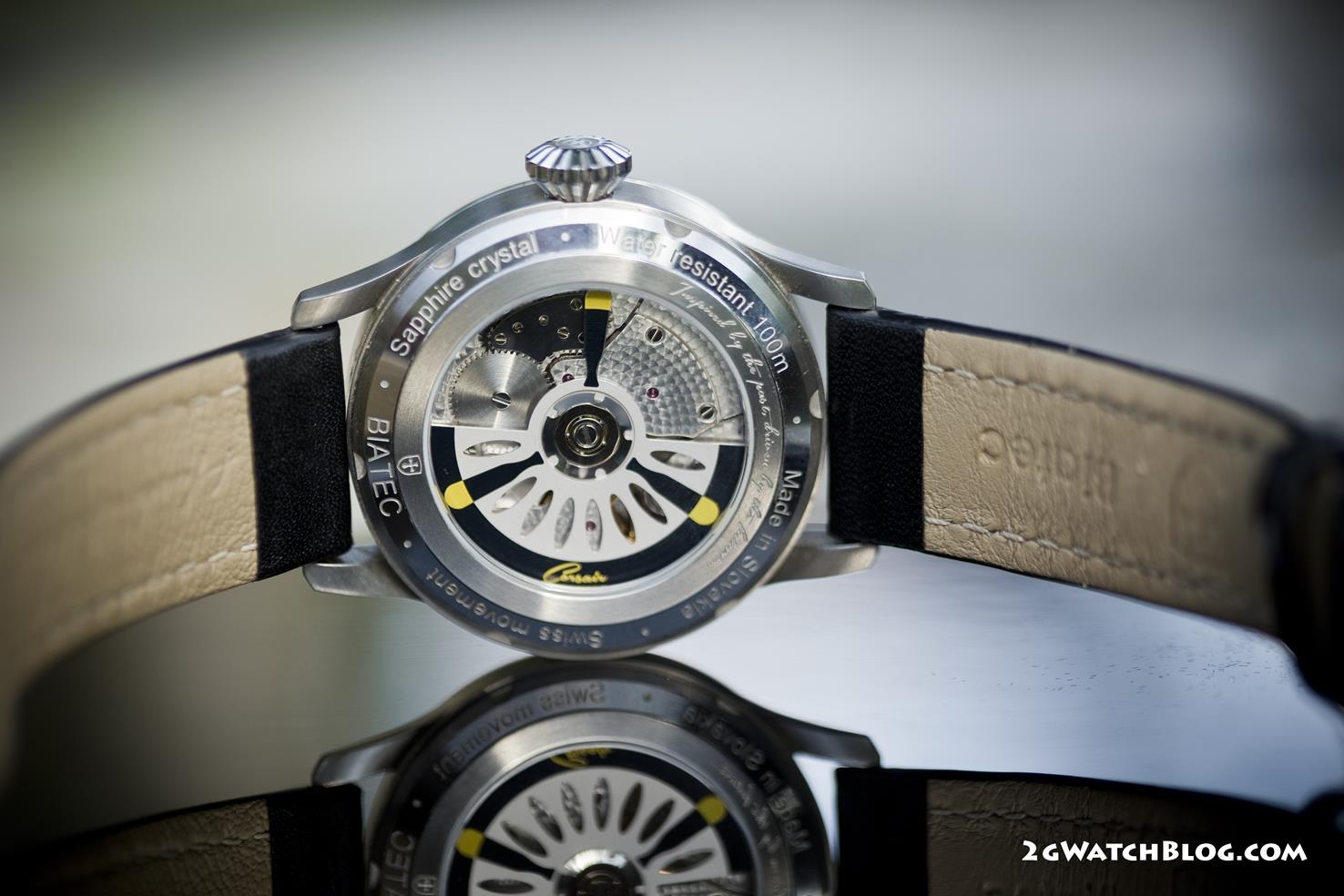 The watch is available for purchase with 4 strap options to choose from. The version on the elegant black leather strap thickened near pins came to me. Personally, if I bought it myself, I would choose a brown nubuck strap. The strap is soft and well made, but due to the thickening at the lugs it is stiffer and causes that the effect of poor positioning on my hand is even more intensified … when it comes to leather straps, I definitely prefer the most soft and without thickening. The brushed steel buckle has the Biatec logo engraved and is made just as carefully as the case. 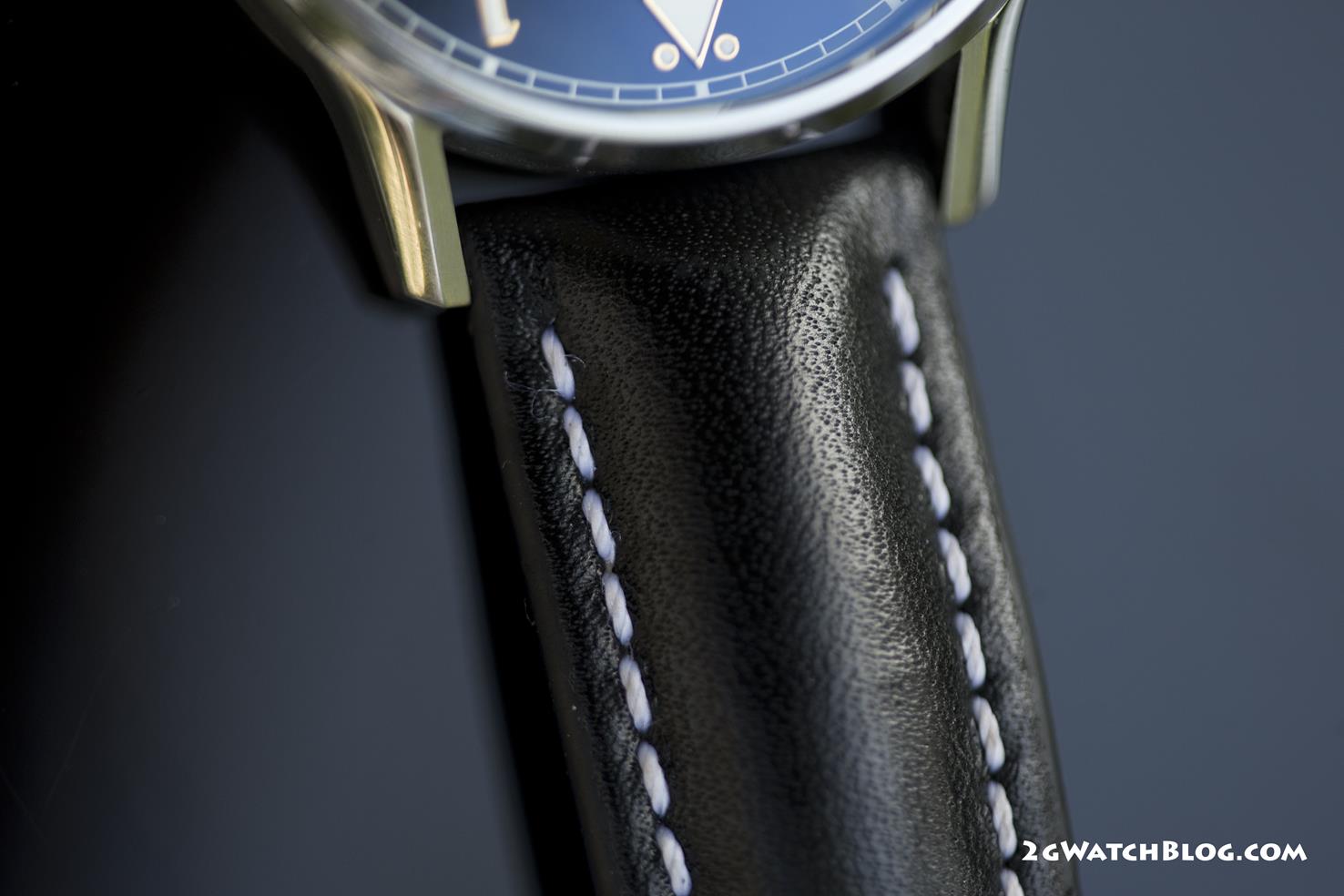 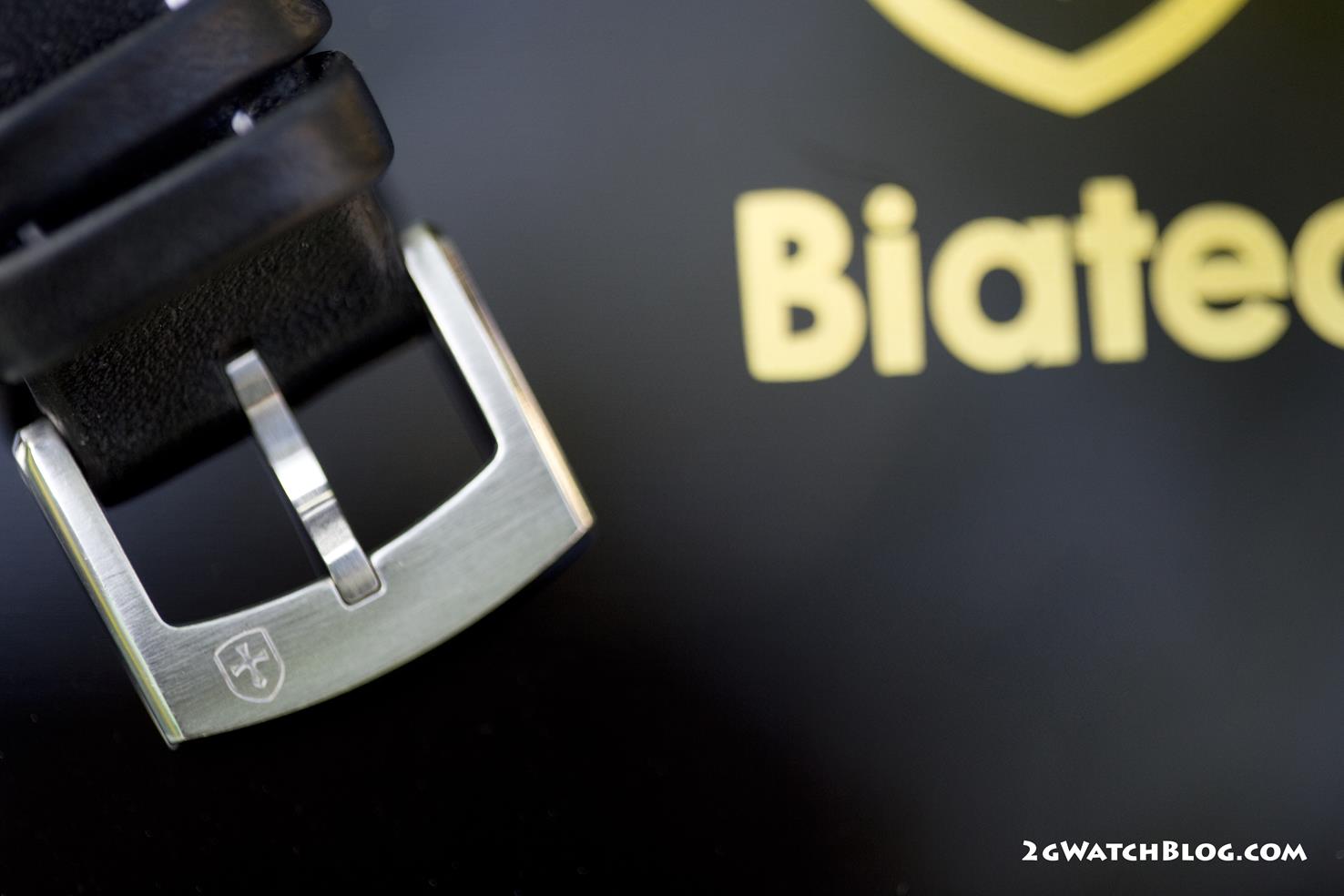 The new Biatec Corsair costs about 6,000 PLN and it cannot be hidden that for a microbrand watch it is a high price but in my opinion this watch is definitely worth this amount. It confirms my supposition that in the case of Microbrands the price increases in direct proportion to the quality and we get exactly what we pay for.
Although during the testing of the watch it came out  that due to the shape of the lugs, the watch does not want to lie on my wrist, I still consider it to be the most interesting contemporary variation on the type of a pilot watch and if I had to leave it for myself I would definitely try to put it on other, softer straps because I really liked the watch. I like the bold solutions Biatec has used in this model and the project as a whole.

Regarding the Leviathan model I mentioned at the beginning of the review, well … I am looking forward to the moment when they will be officially available because after the first contact with Biatec I want more 😊 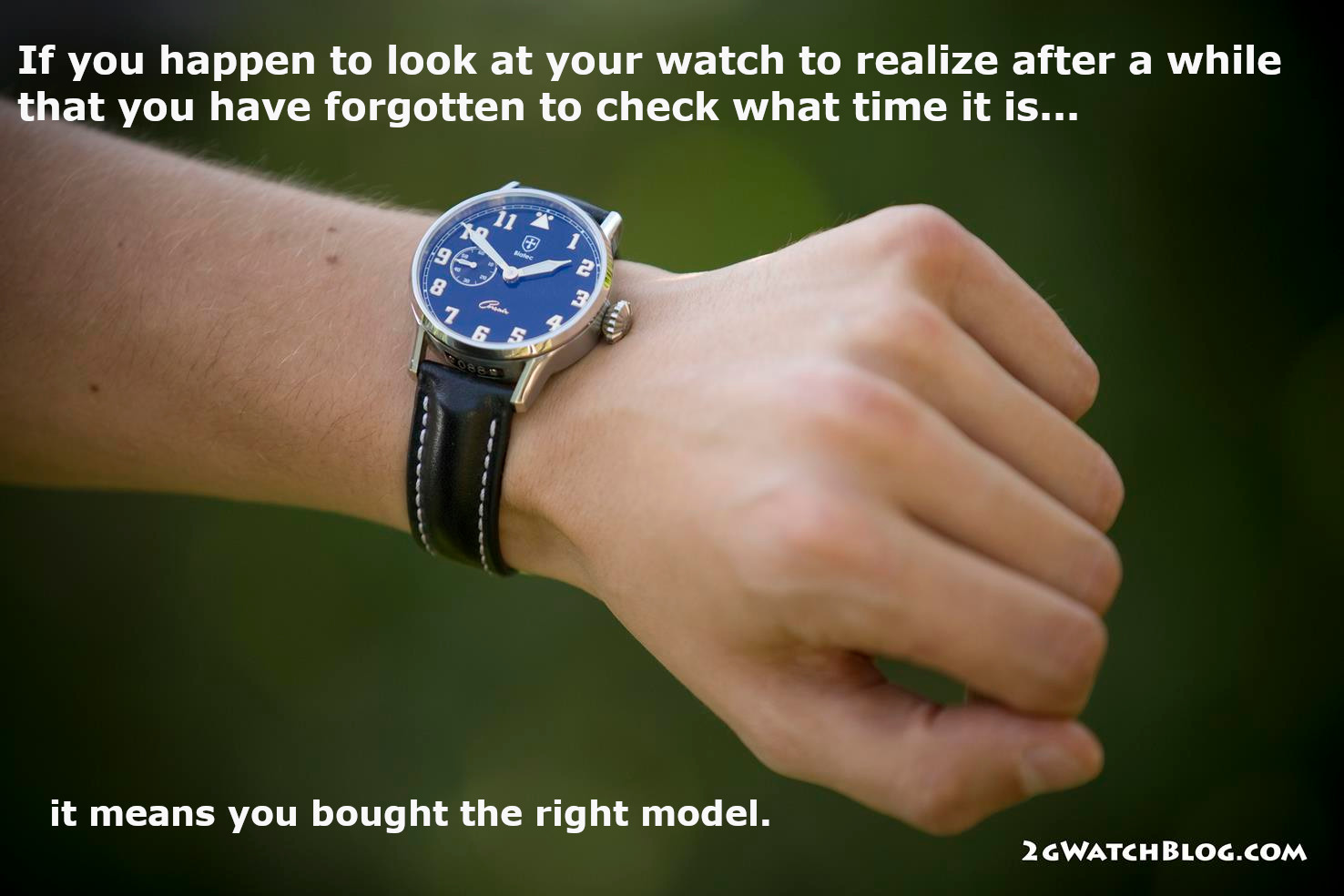